Did Obama "green light" a trillion-dollar industry in Puget Sound? 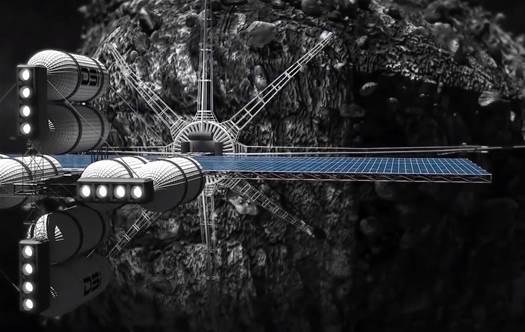 Our region was built on ludicrous-sounding “get rich quick” schemes. Long before software and airplanes, Seattle’s economy ran on timber. But it was the Klondike Gold Rush of the early 1900s that put a lumber outpost on the road to becoming a major city, with Seattle serving as jump-off point for hordes of people chasing distant, mostly non-existent riches.

A lucrative new frontier could be opening now, also promising far-off riches beyond imagining, and with Puget Sound once again playing the role of launch pad. This is the “final frontier," so to speak: space. And in this early-stage commercial sector, one Puget Sound company may have just been handed a ticket to a burgeoning multi-trillion dollar empire by President Barack Obama and U.S. Congress.

That company is Redmond-based Planetary Resources, and its focus is mining the asteroids orbiting near Earth. More than just spinning hunks of worthless rock, asteroids can contain billions, even trillions, of dollars in precious metals like platinum. The company estimates one asteroid in particular is worth more than the entire GDP of the U.S. and European Union combined.

The company's pedigree lends credence to a business model that seems straight out of sci-fi: It's staffed and founded in part by former NASA scientists and funded by the likes of Eric Schmidt and Larry Page of Google. The outfit also has D.C. clout in the form of Peter Marquez, former Director of Space Policy for both President Obama and George W. Bush.

Marquez likely played a central role in the passage of the Commercial Space Launch Competitiveness Act, which was signed into law by President Obama late last year. The bill attempts to clear up a snafu in Planetary Resources’ schemes – the international Outer Space Treaty signed in 1967 by over 100 nations, which states that "outer space, including the moon and other celestial bodies, is not subject to national appropriation by claim of sovereignty, by means of use or occupation, or by any other means."

While some have said this only applies to nations, not individuals, other sections of the treaty require nations to bring their citizens in alignment with space law. The new law presumes to negate that obstacle by allowing U.S. citizens to “possess, own, transport, use, and sell” the resources they find on asteroids.

“This is the single greatest recognition of property rights in history,” said Planetary Resources’ co-founder Eric Anderson following the bill’s passage. Another co-founder, Peter Diamandis, said, “A hundred years from now, humanity will look at this period in time as the point in which we were able to establish a permanent foothold in space.”

Quotes like these – setting the company up as the grand first step toward an unfathomably lucrative future – have been key to Planetary Resource’s pitch since it was founded in 2010. The on-site advertisement for their newsletter reads, "We dare you to change the course of humanity with us."

At some point in the near future, one imagines every publication and news channel containing any business coverage will have dedicated some attention to the company, with editors always on the hunt for catchy, fantastical-seeming stories. It’s an appealing vision, and has been deemed “not bullshit” by none other than prominent astrophysicist Neil deGrasse Tyson.

While this recent bill may iron out some of the wrinkles in their business plan, many questions remain unanswered. For example, the company is building a case for investors to spend billions reaching near-Earth asteroids, on the basis that there are trillions worth of precious minerals on them. Speaking with me in 2013, the company's president and chief engineer Chris Lewicki compared it to the investment oil companies make in offshore oil platforms.

But if you suddenly triple the earth’s supply of a precious mineral – as a mined asteroid conceivably might – it’s no longer quite as precious. That makes the true value of asteroid mining hard to predict. The case of not-at-all-rare diamonds shows this can be overcome through market manipulation, but it's still a lingering question.

Despite being shepherded by the likes of U.S. Sens. Patty Murray and Marco Rubio, the recent legislation seems to have some holes as well. While it says citizens can lay claim to the resources of asteroids, it does not set up a technical process for doing so, or any responsible governmental agency.

The bill also seems to brush aside the fact that the international community, not just U.S. Congress, typically agrees on new rules for space. If China decides on a different process to claim the resources of asteroids, the U.S. bill will be immediately less authoritative or helpful, except as a starting point for future international negotiations.

The idea of mining asteroids cuts to the heart of why space once captured the world’s imagination, and still can. Before NASA budget cuts and ho-hum public reactions to space launches, humans looked to the stars and saw the future, an adventure that would change everything. Seattle became a city on that sort of grand optimism. And while misguided business schemes were fundamental to our past, if Planetary Resources strikes a mother lode, Seattle could play host to the most lucrative bet in history.

Update: This article originally noted that asteroid resources could be claimed simply following their detection, following a similar finding by Wired magazine. However, because the passed bill contains no language laying this out, we have removed the assertion.