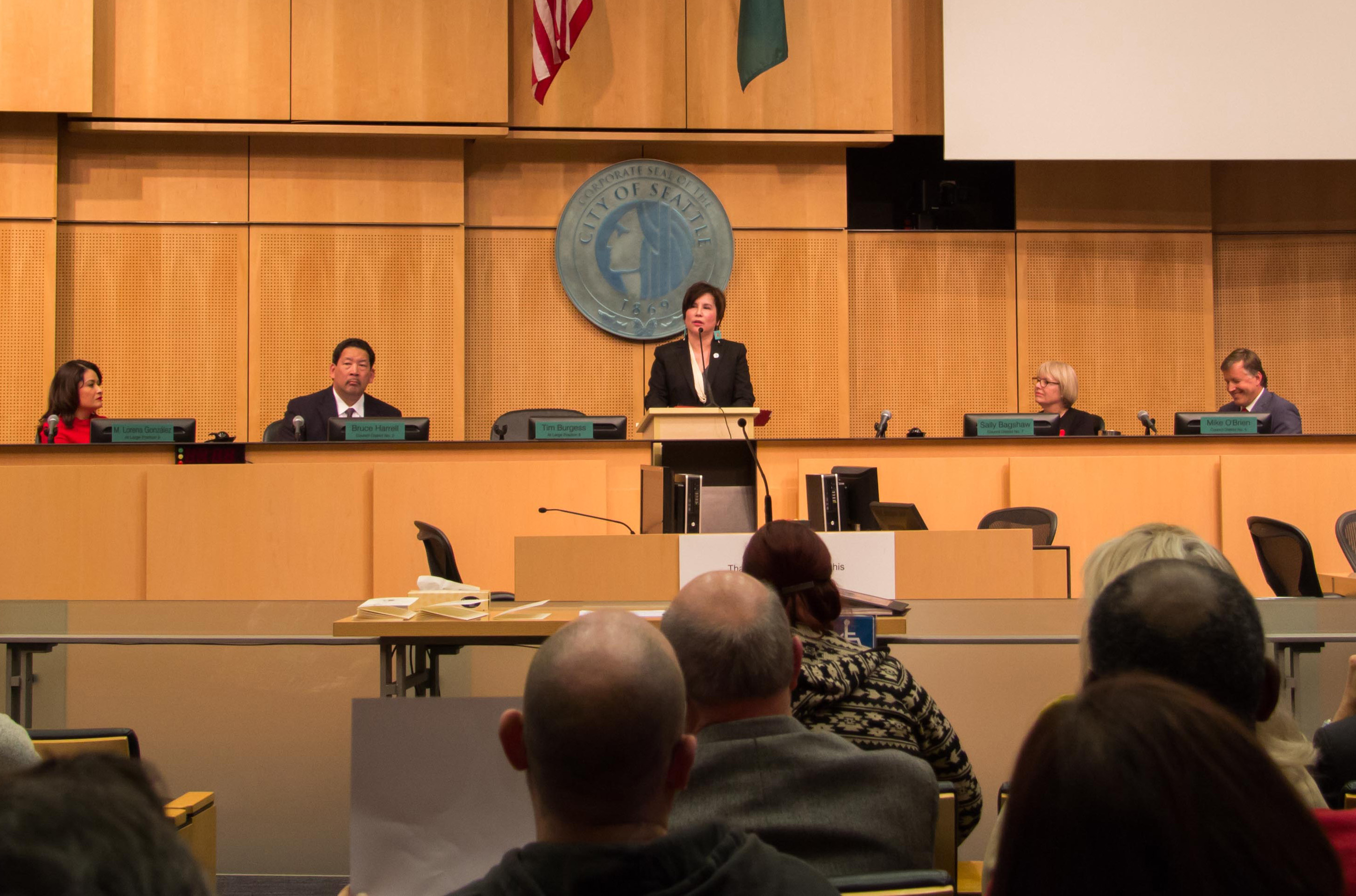 As the rest of the City tests the waters of district representation, District 5 Councilmember Juarez has jumped in with a cannonball. She’s already focused in on three major capital projects for her district,setting up her district office at North Seattle College and taking walking tours to learn what people in her distrit want to see happen.

If Councilmember Kshama Sawant gets credit for pulling the Council left, Juarez could very well become the councilmember who pulls the Council toward serving as neighborhood lobbyists. From the moment she declared her candidacy, to her inauguration speech last week, Juarez has been consistent and clear that she is the elected servant of those who lives on the edge of Shoreline, between Lake Washington to the east and Puget Sound to the west. North Seattle will be the city's "Canada" no more.

After the elections, the big question for Seattle’s new district system will be whether it changes the way the city is governed. Will it pit councilmembers against one another? Will this kill the experimental spirit for which the City Council has become known?

It feels appropriate that the most vocal proponent of the district system also happens to represent north Seattle. Before last November’s election, none of the sitting city councilmembers lived in that part of town. Through the elections, its only defining feature seemed to be the sad state of its sidewalks. And what it can celebrate – commerce, culture, parks, diversity – is often overshadowed by its neighboring districts to the south.

Of the nine councilmembers, only Juarez and Rob Johnson come in totally cold as district representatives. The others were either elected to an at-large position or have to transition away from the old citywide system. “The people that are here in City Hall who didn’t change with the elections are also learning that they have to change the way they do business,” says Juarez. “It’s not business as usual anymore. And so that means the mayor’s cabinet, city agencies all are now starting to see the world through this new prism of districts.”

Councilmember Sally Bagshaw doesn’t disagree. “I will be spending a lot more time finding out what people’s issues and concerns are,” she says. “I did that regularly, but this time we’re just going to up the ante.” Already, says Bagshaw, she’s getting significantly more calls and e-mails from people looking for answers to more street level problems. Over the phone, she reads an email from a man complaining that he had to swerve away from one of the Ride the Ducks vehicles being tested for re-introduction downtown.

Bagshaw, who opposed district representation, says she won’t abandon her citywide approach, but acknowledges it will be a lot of work to balance it with the greater emphasis on neighborhoods.

The city council in recent years has built itself the reputation for focusing on the big conversations – minimum wage, Uber unionization, oil trains, and the like – instead of the neighborhood nitty gritty of potholes and sidewalks. So one lingering question has been whether those lofty sights could -- or should -- be balanced with the micro-level demands of representing a neighborhood.

But for Juarez, it’s not about wearing two hats – serving your district and serving your city is really the same hat. “Representing your city and representing your district complement each other,” she says. “I don’t see them at odds. And I don’t see neighborhoods at odds.” Councilmember Bruce Harrell wants to focus on social justice in his district? Great, I'll help him out. In exchange, you can help me with transportation in my district.

Juarez often references her days growing up poor in Puyallup, part Latina and part Native American. She’s a member of the Blackfeet nation, a history that informs her passion for representing the under-represented.

“When we started a district system,” she said in her inauguration speech, “many wondered ‘what will that mean?’ Well Indian Country knows what that means – you should live with the people you represent.”

Juarez is an optimistic person and, as such, takes an optimistic spin on how seven district representatives and two citywide councilmembers will work together. Her feeling is that councilmembers will be forced to talk with another, because one district representative still needs four votes to get anything passed. Besides, people in District 5 often work in other districts, and the roads don’t change in between.

That said, councilmembers are already starting to sound more like lobbyists. “When I’m looking at Sound Transit,” says Councilmember Bagshaw, “I’ve been looking at how do I get that to Seattle Center. My two top priorities: I want to see it stop at South Lake Union and Seattle Center, because I really want that to be the center of Seattle.” It’s not as if this idea was born at the stroke of midnight on January 1, but when asked if she’s more likely to fight for resources within her own district, Bagshaw says, “You better believe I will.”

Similarly, the first items Juarez has focused on are three major capital projects for District 5: the North Precinct Police Station, the Northgate bike and pedestrian bridge and securing a funding for a second lightrail stop on 130th.

Like lobbyists, how each representative must now approach these sorts of issues is absolutely different in the district system. For Juarez, that's especially with regard to the bike bridge.

“It’s been interesting in that, I’m coming in and I’m excited and I love the work you’ve done in this glass box, but we have other players that feel like they need to have a voice and now I represent them: The owners of Northgate mall and the president of North Seattle College and the hospital all would have something to say.” Juarez has found an institutional approach to projects like these that do not necessarily mirror what the neighborhood actually needs or wants.

Regarding the much-needed new North Precinct Station, funding is currently set to come from a public safety levy to be run within the next three years. But Juarez and her staff have been working with the Mayor’s Office to figure out how to get it built without going to the taxpayers, another example of an effort that may not have happened without a district representative.

Of course, it’s far too early to say whether such lobbying efforts unite or divide councilmembers. Bagshaw says she’s optimistic as well, but has concerns. “If you’ve ever hung out in the King County Council Chambers, you’ll hear, ‘my constituents want x.’ I’m always wanting to be more careful about that. How can you say everybody in your district wants that?”

And, wouldn’t you know it, in the first Monday morning meeting of the 2016, Juarez didn’t hesitate to bring up her constituents in a briefing with Sound Transit. For Bagshaw, it was a reminder of what the council’s become – not good or bad, but simply the truth.

A previous draft of this story said Councilmember Juarez grew up in Yakima. In fact, she grew up in Puyallup.