Shelters maxed out as city sweeps homeless from streets 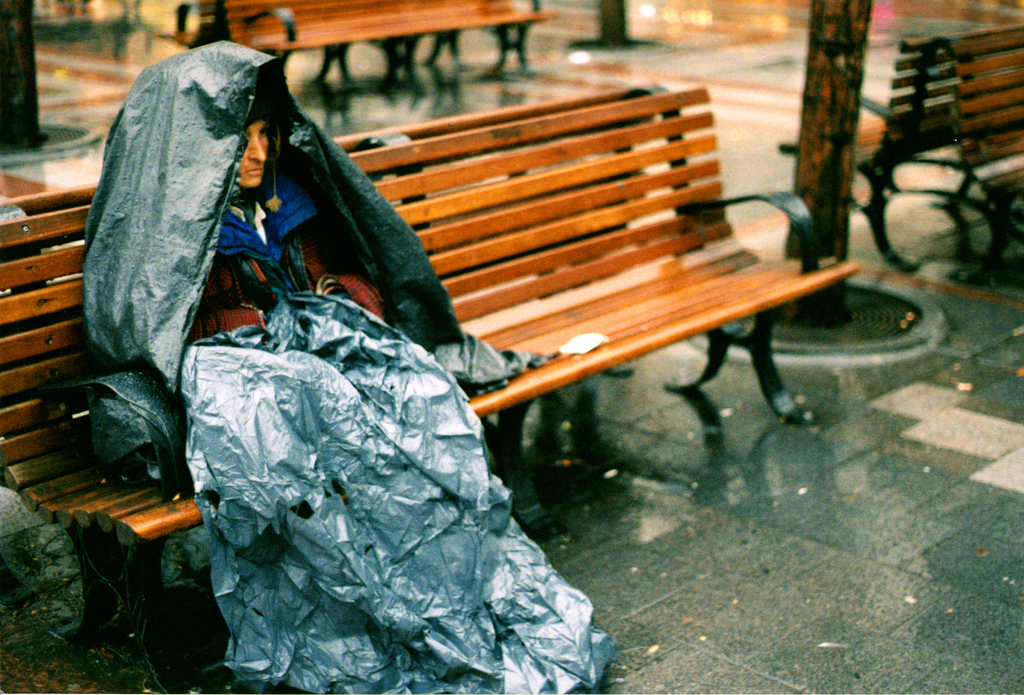 In Pioneer Square lately, you don’t have to go far to find someone who’s been kicked off city property for sleeping in a tent.

On Fourth Avenue, underneath the Yesler overpass, 70-year-old Fannie Kaufman has wrapped herself in a matted wool blanket and the shell of her collapsed tent. Her face is sunken and she blinks slowly. She says that in 10 months on the streets, she’s been moved “many times” by police and city employees.

“They hand you a slip of paper with a list of shelters,” she says. “But you got to get in by 4 or 5. For people like me who have a hard time remembering things, that’s hard.”

Kaufman is not alone. In the nearly 40 cleanups – or sweeps – of unsanctioned homeless encampments the city has carried out since November, only 74 of 184 people made it to a shelter. Whether they refused or were turned away is unclear.

Mayor Ed Murray and others have stood firm that unsanctioned homeless encampments, often perched along highways, are unsafe, and that the sweeps are necessary to divert people down safer paths. But with an increase in sweeps, and a record number of people living on the streets, some wonder if homeless shelters and providers of drug treatment and other services can keep up with the need.

This became abundantly clear Tuesday morning, when the city’s Department of Human Services briefed the mayor and City Council on the city-led cleanups.

Last year’s One Night Count, a survey of King County’s homeless population, came up with 10,047 people living in shelters or on the street, a number many suspect is low.

The City funds 1,600 beds for the homeless. Between recently sanctioned encampments and new shelter beds, Murray’s office says it has added 300 more since the mayor and County Executive Dow Constantine declared a state of emergency in November. Still, representatives from the Bread of Life Mission, SHARE/WHEEL, Compass Housing, YouthCare and the Union Gospel Mission all report full capacity nearly every night.

“We have over 200 beds, which isn’t a lot given the scale of homelessness,” says Jackie O’Ryan with Compass Housing. “There can be long waits.”

At the Union Gospel Mission, Guest Services Administrator John Walling says when they fill up, as they do most nights, “we do work to accommodate. If our cots are full we try our best to lay out chairs. There are some nights that we say, ‘I’m sorry it’s full,’ especially in the cold season.”

The WHEEL shelters for women are often 10 or 20 people over capacity. YouthCare’s shelter for young adults turned away 63 18- to 24-year-olds in December. And at Bread of Life, Ryan Sampson says the staff is seeing more and more referrals from the city and other providers. The shelter’s 106 beds fill every night.

The state of emergency -- the first such declaration made for a social service issue –loosens zoning laws and other red tape, allowing the Mayor to move more quickly. On Tuesday, for example, he announced the creation of “safe lots” for people living in RVs. He can now get City Council approval retroactively.

The mayor and City Council also freed up an additional $7.3 million for homeless services, bringing the total investment up to nearly $50 million in the city budget. Catherine Lester, director of Seattle’s Human Services Department, told City Council members Tuesday that that extra money would fund three main initiatives: Preventing homelessness in the first place, adding shelter space, and doing more outreach to encampments. Some of that money is also dedicated for data collection, an attempt to reduce reliance anecdotal evidence.

And then there are the sweeps. The city has been doing them since 2008. But they’ve increased significantly since Murray took office, with more than 500 in 2015, up from 80 in 2012. Since Murray declared the state of emergency, the city has cleared out over a hundred tents at nearly 40 unsanctioned homeless encampments. Seventy-four people accepted offers of shelter; 60 accepted referrals to non-shelter services like case management.

“Homelessness is a crisis in our community … at a level I’ve never seen,” Deputy Mayor Kate Joncas told the Council Monday. She called it “years in the making,” the result of income inequality, an affordable housing shortage, and a spike in heroine use.

But staff from Murray’s office took heat from the City Council over the sweeps. “This is a euphemism for what is actually happening, which is sweeping people off where they have to go,” said Councilmember Kshama Sawant. “Using terms like ‘compassionate’ and ‘humane’ … that’s an oxymoron.”

Councilmember Lorena Gonzalez asked who decided what was trash and what was personal as city officials cleaned out sights. Councilmember Mike O’Brien was skeptical that encampment residents knew what was happening with their things. In a statement, Councilmember Lisa Herbold asked why some homeless people had not received or accepted shelter. And Councilmember Tim Burgess asked if there were in fact enough services to go around for the people being removed from city property.

Regarding the security of people’s things, Chris Potter of Finance and Administration Services, said city employees were very conservative in what they threw away, and safely held personal belongings. He also said that people were given plenty of warning of upcoming sweeps, and that opportunities for finding shelter and services were plenty.

But it’s Burgess’ question that seems to simmer beneath all of this: Can the city actually provide the services it promises?

“Increasingly, yes,” answered Lester, the Human Services director, Lester admitted, however, that broadly: “This conversation elevates for us that there’s so much we don’t know.”

Lester’s department will submit its full proposal for spending the $7.3 million to the council in February. Councilmember Sally Bagshaw issued a very public invitation to representatives in the crowd Monday from the ACLU, Real Change, the Low Income Housing Institute, and SHARE/WHEEL to attend her next Human Services Committee meeting February 10. They all appeared to nod their head in acceptance.

O’Ryan, meanwhile, is glad to see movement on the issue, which she says has been festering for decades. “The only right answer,” O’Ryan says, “is to keep working at the problem.”