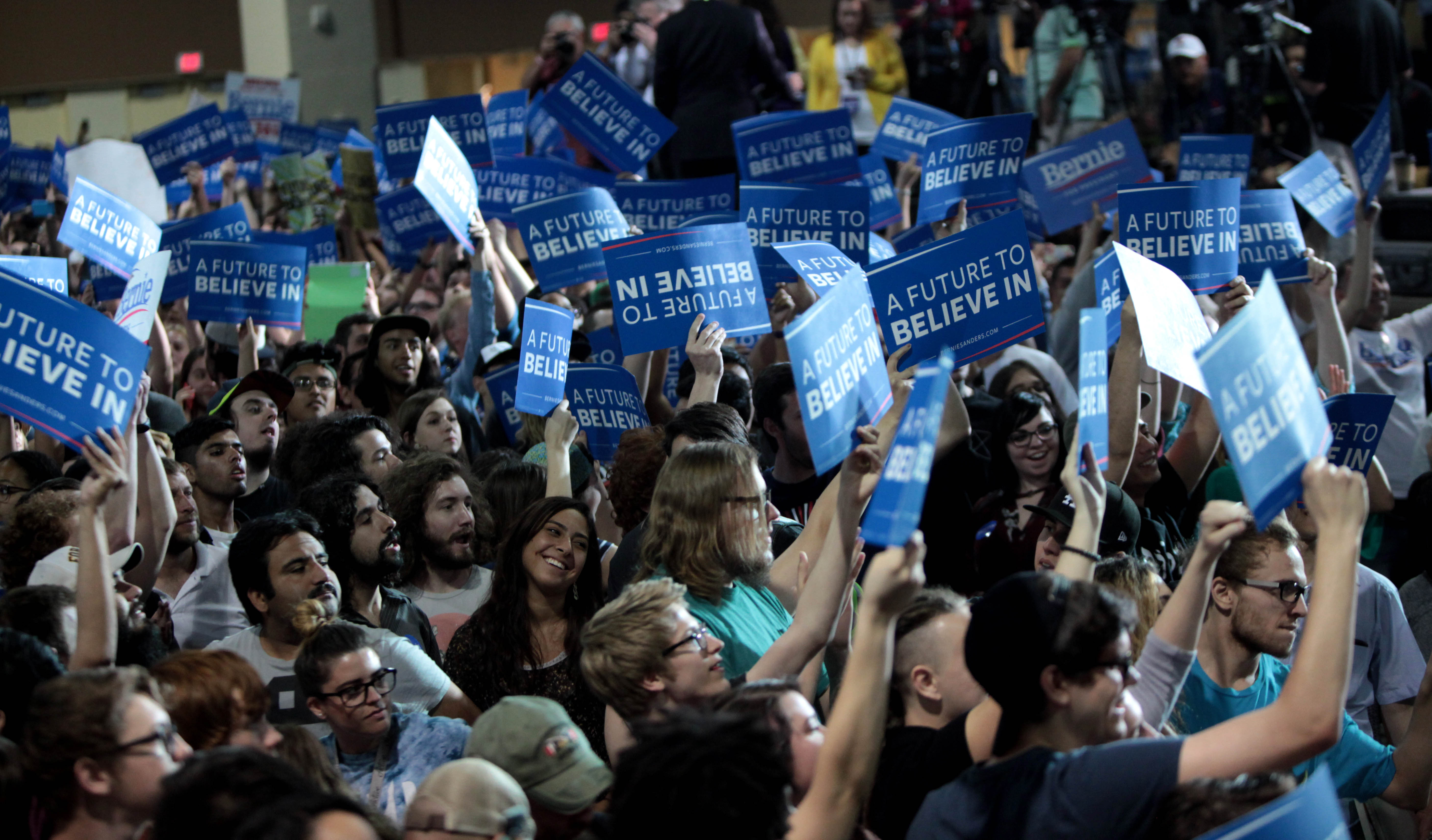 Bernie Sanders supporters at a rally.

On Saturday, Bernie Sanders voters (including me) flooded Washington’s caucuses and carried the day with 72.7% of the delegates awarded.  In my Greenwood precinct, the vote was four-to-one in favor of Sanders, with the youthful energy of the caucus exemplified by our delegates and alternates. They will ultimately pick 101 delegates to the national convention, and based on the caucus results, Bernie will end up with about 75 percent of them.

But Washington state also has 17 “super-delegates” to the Democratic National Convention - elected and party officials not bound to the popular vote. Just as Bernie won the state in a landslide, Hillary Clinton is winning that race overwhelmingly.  Our governor, two U.S. Senators, and six Members of Congress have declared for Hillary, while eight party officials remain on the sidelines.

What gives? How can Bernie voters prevail so dramatically, while the only pledged super-delegates are for Hillary?

Hillary proponents will no doubt point to the super-delegates’ seasoned judgment and personal knowledge of the candidates to explain their choices. That may explain some of the choices, but I think there is something else going on that opens a window into a deeper quandary for the Democratic Party in the state.

Here’s the process that yields this divide.  Before the first vote is cast there is a “perception primary” in which party leaders, advocacy group leaders, and major donors assess the field and start picking their candidates. Endorsements play a role, but it’s money that largely determines perception. It’s a very quantifiable scorecard for observers.

The process can help separate credible candidates from fringe ones, but sometimes the perception primary takes on a very undemocratic momentum of its own. With the right combination of money and institutional support, savvy candidates (and their backers) can clear the field of strong opponents.

I saw this in action working locally on Sierra Club political endorsements.  We participated locally in the “perception primary,” but often found ourselves reacting to a dynamic well underway.  By the time we were looking at our endorsement decisions, early perceptions had often yielded a clear frontrunner.

Then we faced a choice - build favor with the likely winner, or take a risk on the underdog. So long as the underdog was credible, we almost always went with the candidate closer to our values because our strength was drawn from our idealism.  But even we would hesitate to back a candidate wholly without a chance of winning.

The question for us, as well as any potential endorser, was how to best use the endorsement process to be effective. There can be substantive benefits to having a good relationship with the winner.  But there are also benefits to standing on values to move the debate. It is the very essence of pragmatism to figure out which path to choose.

But when the election appears to have been decided before the first vote is cast, it puts real pressure on endorsers. Remember, the perception primary told everybody that Hillary was a sure winner and Bernie was an unlikely long shot. The clear message was “get on board or be left behind.”

That pressure torques the decision-making even more for political insiders like super delegates or the heads of organizations. They swim in a different pond than the people they represent.  Getting phone calls returned, making deals on legislation, and being asked for advice are all part and parcel of proving their effectiveness to constituents.  When individuals see their personal power as deriving from relationships and access, they will put a greater weight on building those relationships. Their status in the political arena can become more important than the candidates’ positions on the issues.

So now those super-delegates find themselves dramatically opposed to their party’s grassroots. The primary that was underway before the caucuses – the one without voters but boatloads of cash – created a narrative that Hillary was destined to win and Bernie was a loser.  The super-delegates played the game according to the rules, and their endorsements helped build an even stronger narrative of inevitability.

That isn’t just undemocratic, it also affects the party’s message. When Iowa and New Hampshire voters said Bernie was for real, the logic of inevitability required an attack on his agenda. Voters were told “you can’t have universal healthcare, we can’t afford to pay everyone’s college tuition, and you’ll never get a minimum wage increase through Congress.” If Hillary was inevitable, then so must be her agenda.

But consider those young delegates and alternates from my precinct. They gave up a sunny Saturday morning and committed to another long hot caucus day because they believe that change is possible. They desperately hope that status quo politics are not inevitable. They reject the politics that leave them with piles of debt and stagnating wages. The false pragmatism that says oil drilling and fracking are okay, even as global temperatures set new records.

My intention is not to contrast them with Hillary voters at the caucus.  They’re the grassroots too. But the Democratic party has created a system where the election appears to have been decided before the public even voted. Party super-delegates are essentially telling these overwhelming youthful voters, the future of the Democratic Party, that they are just wrong for believing what they do.

No matter how this primary election works out, the Democratic party will have some soul-searching to do about how it got here, and how not to fall in this same trap again. It’s not just about some super-delegates from Washington changing their preferences (though they should).  It’s not even about reforming the super-delegate rules. It’s about rejecting the undemocratic politics of inevitability, where big money and the big organizations dictate our choices, and where hope is snuffed out by power. Inevitability may work for candidates, but it doesn’t work for the Democratic party as a whole. True strength will come from the bottom up.