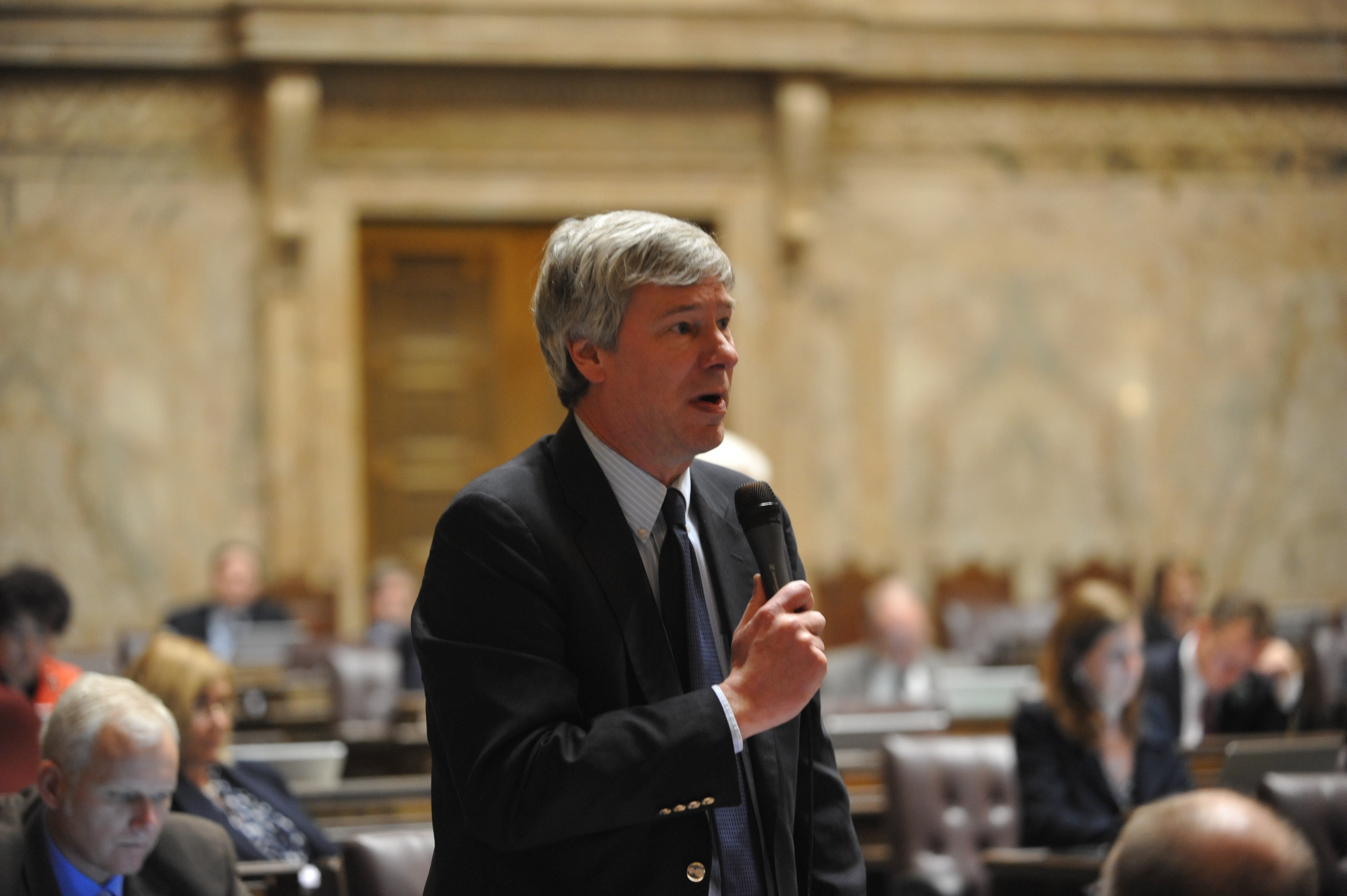 The budget approval came after disagreement caused the Legislature to spill into overtime, running past its scheduled March 10 ending. Democrats and Republicans disagreed particularly over how — and how much — to pay for homeless-assistance programs, getting more teachers into state schools, and improvements to mental health treatment.

Democratic lawmakers had repeatedly proposed significant funding for helping the homeless and teacher hiring, but numbers released Tuesday showed them falling far short of their original goals — with no funding for teacher pay and less than a tenth of the money they had sought for homeless assistance. And to the dismay of many within their own party, Democrat budget negotiators at the last minute abandoned plans to fund an extension of public schools' local levy authority.

Of the Democrats' three major priorities, only the least contentious — new funds for mental health programs in the state — appeared to have gained traction in budget negotiations.

Collectively, the budget numbers appeared to represent at best mixed results for Democrats in Olympia — and basically a success for Republicans, who repeatedly drew hard lines on spending during the legislative session that started in January.

After the measure passed, Senate majority leader Mark Schoesler, R-Ritzville, conceded that Republicans had basically gotten everything they wanted in the budget.

"A little less spending would have been nice," Schoesler said. Although Schoesler indicated that Republican lawmakers would have liked to see some policy bills pass that didn't, he acknowledged that they had avoided making compromises on any key issues that matched what Democrats had given up in the budget.

“We said at the start of the session that even though this was a supplemental budget year, we needed to make incremental progress,” Sullivan said. “This budget gets us there.”

Later, speaking on the floor of the state House, Sullivan said funding in the budget would bring more teachers to public schools.

But the budget includes no money to increase teacher pay or hiring, which Democrats had called a major priority earlier in the session. Democrats had originally requested $98 million for teacher hiring and training. However, the budget passed Tuesday includes only $7.1 million for training educators, including funds for a mentorship program for new teachers and programs to help college students and teaching aides obtain teaching certificates.

Teacher shortages in the state have been called a crisis, and large class sizes have been widely cited as part of the larger education-funding shortage that led the Supreme Court to order the Legislature to increase school funding.

For his part, Schoesler said that funding higher pay wouldn't have solved the shortage right away. He also said salaries likely don't have much affect on college students choosing their careers. "You're still going to do the same thing whether the salary is X or Y," he said.

Democrats also appeared to have been unable to pry any significant new funding out of Republican budget negotiators for homeless-assistance programs - another top issue for Democrats. Sullivan acknowledged that Democratic budget negotiators had only secured $15 million in funding for the programs - the same amount Republicans had originally allocated.

The new budget’s $15 million for homeless-assistance programs does appear to be allocated differently than Republicans originally proposed. That money now funds at least five additional programs, including housing grants and a program aimed at homeless students. Sullivan and other Democrats called that a victory. But when asked if their inability to gain any funding beyond the $15 million Republicans had proposed —which Democrats at the time called far too little — Sullivan dodged the question.

Mental health funding saw the only major success for Democrats in the budget. Republicans had originally proposed a budget that cut $14.3 million from state mental health programs' over a little more than a year, while Democrats had proposed adding $11.3 million. The compromise budget that passed Tuesday contained an increase of $7.8 million, meaning Democratic budget negotiators were able to pull $22 million in funding out of Republicans. In the process, Democrats managed to get Republicans to entirely abandon a proposal to pull some money out of Regional Support Networks, which provide mental health services at the community level. In total, the only major concessions the Democrats made on mental health were to create fewer mobile crisis teams and abandon the creation of special emergency evaluation capacity at existing facilities.

Still, the overall tenor of the budget was indicated Tuesday by the fact that as the state House voted on the budget bill, rank-and-file Democrats voiced their objections to the dearth of new funding in the bill, while leadership repeated lines from the earlier press conference, calling it a compromise, and insisting it made some progress. The budget passed out of the House 78-17, with a mix of Democrats and Republicans voting against it. The performance was largely repeated in the Senate, where the budget passed 27 to 17, with some Democrats voting against it in protest.

News also emerged Tuesday that House Democratic budget negotiators had, near the end of the negotiation process, abandoned earlier demands to extend the levy authority of local schools — freeing up $91 million in funding, but creating the possibility of budget problems for local schools.

Known as the "levy lid lift," the proposal which legislators abandoned Tuesday would have given schools the authority to continue funding themselves with increased local levies above a statutory maximum. In 2010, the Legislature passed a temporary bill allowing schools to raise more money through local levies than state law otherwise allows. Ever since, legislators have regularly extended that authority, creating a situation where many schools are dependent on local tax levies for a significant portion of their funding. But this year lawmakers refused to extend the expiration date, creating a situation where schools will start having to send out layoff notices next spring if lawmakers don't come to some sort of resolution on taking over all local expenditures for basic education. Under a state Supreme Court ruling known as the McCleary decision, the Legislature and governor have to accept full responsibility for all essential educational spending statewide, in order to provide all students equitable opportunities.

Again, the development amounted to an achievement for Republicans. Rep. Chad Magendanz, R-Issaquah, said the move had been undertaken to free up $91 million that the state would have had to pay to match the levies. Because the Legislature passed a plan to find a fix to the state's McCleary school funding obligation by the end of the 2017 legislative session, and such a fix would make levy funding unnecessary, Magendanz said, the $91 million in matching funds would be unnecessary. And that freed up money to balance other parts of the budget.

Democrats expressed skepticism that legislators would be able to get a McCleary fix out on time, and warned that not doing so would create chaos for schools dependent on levies for paying teachers, among other things. But Magendanz — who actually voted for a levy extension on the same grounds as the Democrats earlier this year — said Tuesday that because of an extension in the timeline for schools to send out layoff notices, schools would have plenty of time to wait for the Legislature next year. That, Magendanz said, allayed his earlier concerns that not extending the levies might leave schools in the lurch, and made it responsible to use the levy extension as a way to hold the Legislature's feet to the fire, and force a McCleary fix.

"This place is driven by deadlines," Magendanz said, referring to the Legislature. "This is one of those forcing functions."

As the evening wound down in the Capitol, legislators in both houses seemed to already have their eyes on the coming year — but another deadline looms that, given the Legislature's difficulties making decisions on public school funding, might become pressing. After the governor signs the budget, the state has 30 days to submit a report to the state Supreme court about how it has complied with the court's McCleary order. So, a month after legislators go home for the year, nine more sets of eyes will look over the budget — and the justices will form their own opinions about how much legislators got done this year.