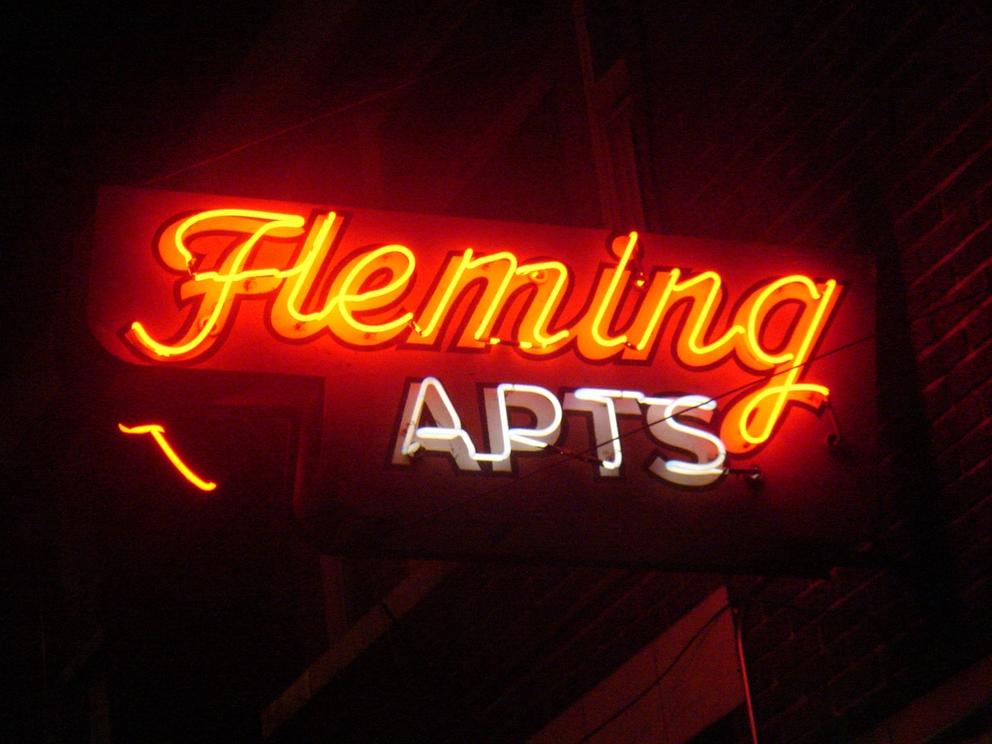 The Fleming Apartments in Belltown are in a brick building in Belltown, an area where some units remain relatively affordable.

That is, of course, if you take the Wall Street Journal at its word. In an article published today, the financial paper makes this argument from a competition perspective: finding a place to live here is hard, about as hard as in our frenemy city to the south.

The timing of its publication is appropriate: The Seattle City Council on Friday tweaked and essentially signed off on the mayor’s proposed $290 million housing levy, set to go to voters on this August's primary election ballot. That’s double the size of the previous levy passed in 2009. And yet even at that size, one would be forgiven for thinking it’s a small finger in the dike that is Seattle housing prices. It’s a point of conversation more common than the rain, which is impressive in Seattle.

The levy will go to the full council next, although eight of nine were present Friday for a committee meeting, so it’s basically a done deal.

As the New York Times highlighted in a recent piece about San Francisco, there would appear to be a surprisingly simple solution: build more housing. That's what many newcomers are advocating there, and groups in Seattle like the Sightline Institute have been vocal advocates of doing just that, mostly by easing or even doing away with Seattle’s single family zoning.

In essence, building more housing, at least on a limited scale, is the main thrust of the Housing Levy, with more than two-thirds of the proposed spending going toward production and preservation of low-income housing. And Mayor Ed Murray's Housing Affordability and Livability Agenda envisioned the fruits of the levy as helping meet part of its 10-year goal of creating an additional 50,000 residences, some 20,000 of which are supposed to be affordable.

But there’s an issue deeply connected to Seattle’s housing crisis that may not be so clearly answered through construction of units: displacement of the mostly low-income and minority communities who’ve lived in their neighborhoods for years.

“The levy historically, and this year too, focuses on the construction of new affordable units,” says Councilmember Mike O’Brien in an interview Friday, “and that’s a very important piece of what we need to do. But there’s a component as rents continue to go up — the types of displacement we’re seeing in our community is often not addressed directly by new construction.”

O’Brien tells the story of a single mother and an older woman who lived next door. For years, says O’Brien, this woman could drop off her children with the woman next door while the mother did errands or went to work. But when the older woman was priced out, that connection fell apart. It’s O’Brien’s version of Seattle’s “soul.”

“We absolutely need to build new affordable housing,” says O’Brien. “That’s great, I support that. … But there’s a bunch of people today in our community who are in either market rate affordable housing or with other subsidies that are falling apart. … To simply break those all apart and say, we’ll build some new units, and say, some of you will get back in, doesn’t recognize the total value of what’s happening.”

As a response, O’Brien with Councilmember Lisa Herbold proposed a levy amendment, which the council approved, to beef up the city’s efforts to keep people in their homes, rather than solely focusing on making sure there are places for people who need them. Using $30 million in loans from future levy revenue, the city will focus on buying and preserving these occupied units, usually affordable by nature of the market (older buildings can be naturally affordable without housing subsidies), with the goal of allowing longtime tenants to stay.

As development booms, the concern is those affordable units are being replaced with newer, more expensive units. The argument in favor of redevelopment is that for every old unit torn down, eight new ones are built. But while this argument treats some of the symptoms laid out in the Journal piece, it is harder to see how it helps the people forced to move.

There’s a tricky balance in this: How do you preserve and develop at the same time? Boil it down, and the question is really about whether there’s a difference between gentrification and displacement. If so, where is that line?

“It’s a challenge,” says O’Brien. “As we create more opportunities to build housing, usually through zoning changes, it does put pressure on existing housing.” But restricting that zoning also raises the specter of San Francisco, which restricted development to the point that only very rich people can live there. Plus, no one is really ready to advocate for neglecting investments in entire neighborhoods in order to prevent displacement. That would be nothing short of racist.

In this particular scenario, O’Brien imagines identifying key buildings that might get preservation assistance even as new, more expensive units sprout up around them. This is the utopian dream of many city hall occupants: a city of mixed-income neighborhoods rather than the largely segregated place we have today.

In general, preserving occupied, market-rate affordable units is more of a challenge than the subsidized units already on the city’s radar. Identifying them, understanding who lives in them, preserving them for the right people — all of that will require help from people outside of city hall so the city can choose where to best spend this $30 million.

The third of the levy not marked for construction and preservation would go toward homelessness prevention programs, homeownership assistance and operating costs for housing service providers.

Just because the council is approving the levy doesn’t mean it’s a stagnant document. The council provided the Office of Housing with 12 recommendations or requests to improve the implementation of the proposed levy. But regardless of how the final piece shakes out, look for the tab on your next ballot here in ... Seattle.