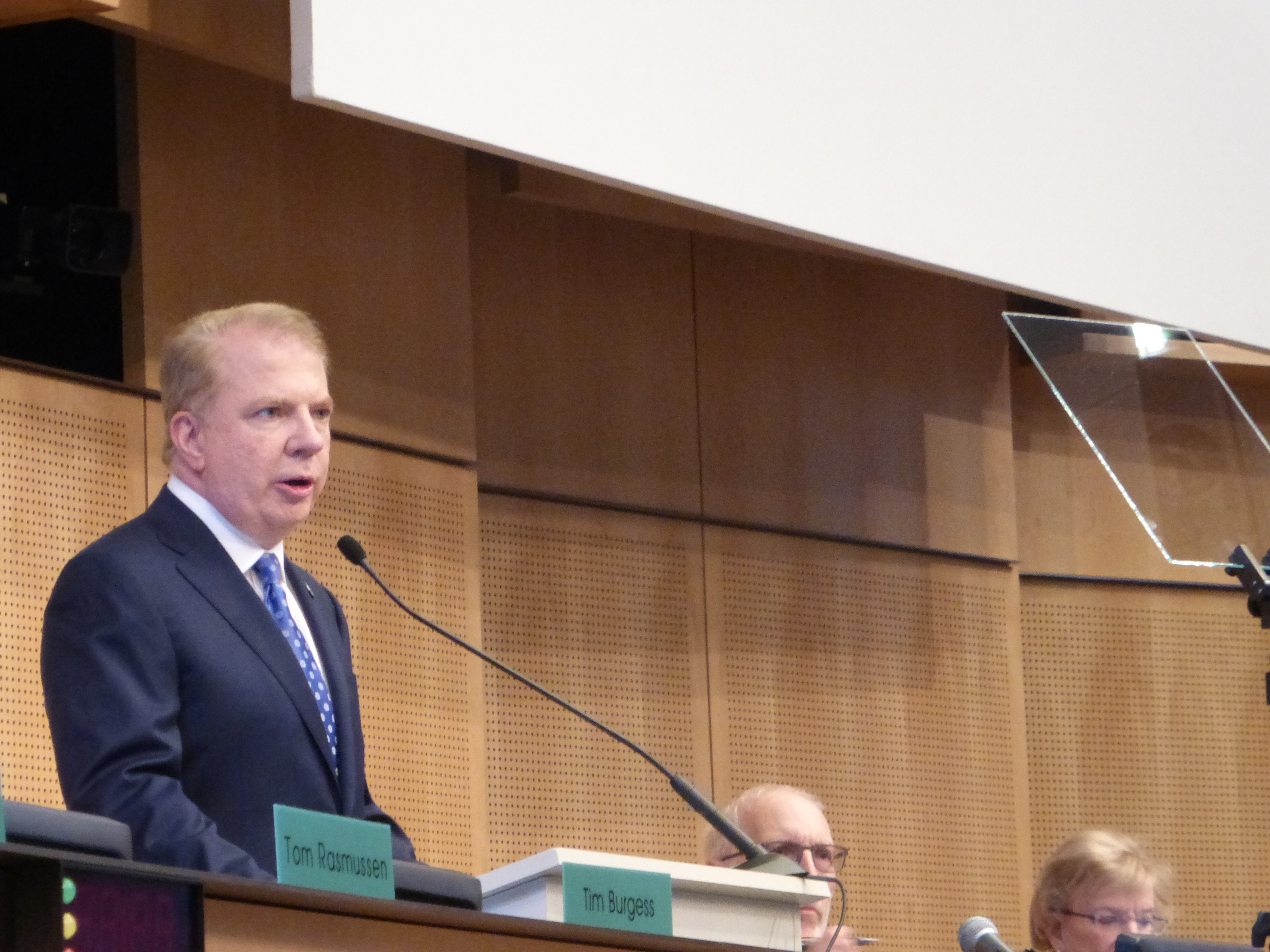 Last month, shortly after staff from Seattle Mayor Ed Murray and Gov. Jay Inslee’s offices introduced their plan to shut down the East Duwamish Greenbelt, a.k.a. the Jungle — home to hundreds of homeless people — City Councilmember Sally Bagshaw began writing a resolution. Bagshaw thought the mayor’s plan wasn’t right. Its focus on getting people out of the area on a deadline didn’t mesh with the councilmember’s push to rethink Seattle’s shelter system. Her resolution would rewrite the plan, making relocation of homeless people contingent on the city's ability to provide other alternatives, not on a deadline.

The Mayor was in China when he got word of Bagshaw’s plan. He was not pleased, and on Saturday, May 21, he sent her a text to say so. “If you do resolution (sic) on homelessness,” it read, “restricting our ability to deal with the rapes and other violent crime and the bike chop shops down there in the jungle I will stop all clean ups (sic) throughout the City and pull police off enforcement. We are losing the ability to control our streets.” 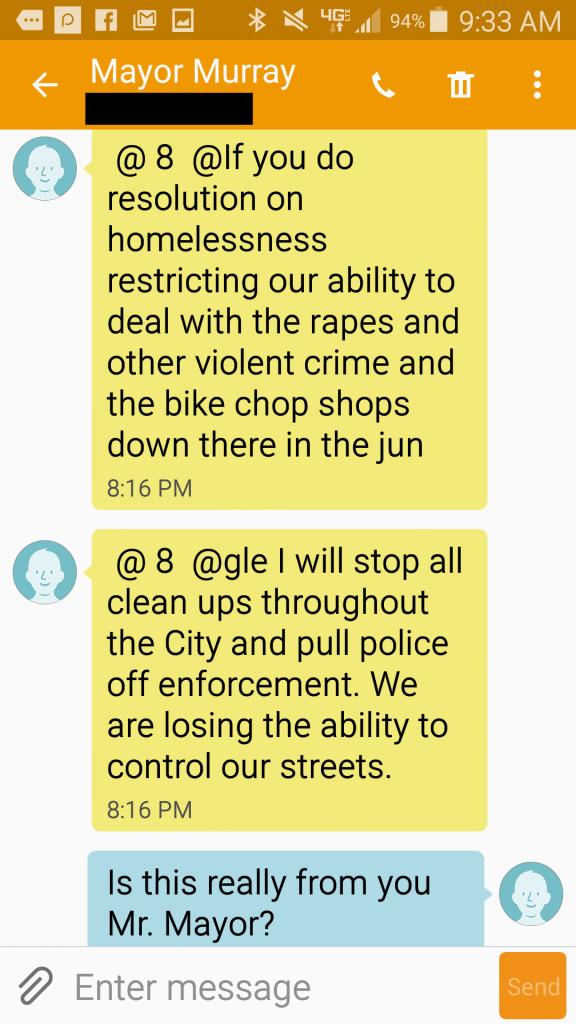 Since Murray took office, his office has steadily ratcheted up cleanups, or sweeps, of unsanctioned homeless encampments. In 2015, the city moved nearly 600 encampments, up from 80 in 2012. So it was odd for the Mayor to threaten to stop all cleanups and pull enforcement in response to this resolution. The implication seems to be that it would be Bagshaw’s fault.

Texting back, Bagshaw was confused. “Is this really from you Mr. Mayor?” she asked.

“Yes” he responded. “I need to speak with you this evening Seattle time. I am getting media calms (sic) that you are leading a council effort to stop our efforts in the jungle. I am stunned so I should talk with you before I respond.”

Crosscut obtained the texts via a Public Records Act request.

Murray’s temper is a thing of legend by now, with anecdotes passed between reporters and former staff members like campfire stories. That temper has been less public lately, but the stories still creep out of City Hall.

And this isn't the first time that he's resorted to threats. When the NAACP argued that delayed construction on 23rd Avenue was meant to push black people out of the Central District, Murray said he would stop the whole project and cease to do improvements in the area. That did not end up happening. 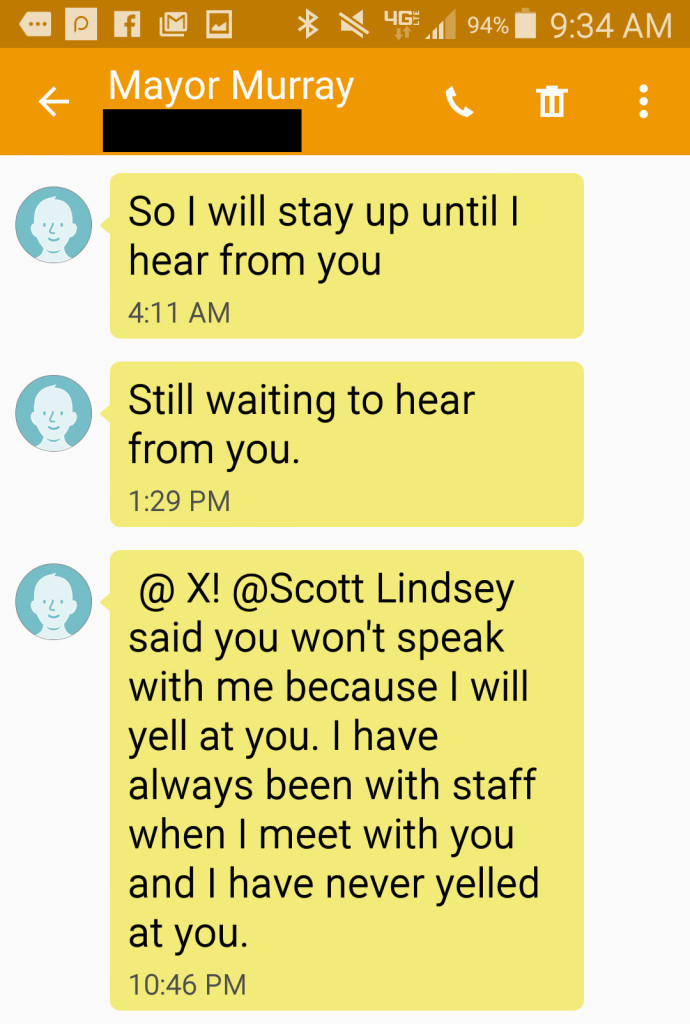 After Murray's threat to Bagshaw, texts between the two went silent until 3:45 a.m. Sunday morning, when Bagshaw finally responded that she was “still gathering information and community comments.”

“I assume it is 4 am in the morning so I won’t call now,” Murray wrote at 4:11. “I am absolutely taken aback by your lack of collaboration. Don’t get it. So I will stay up until I hear from you.” More than nine hours later, Murray still hadn’t heard back. "Still waiting to hear from you," he texted at 1:29 p.m.

At 10:46 p.m. on Sunday, Murray wrote “[mayoral advisor] Scott Lindsey (sic) said you won’t speak with me because I will yell at you.” He promised he wouldn’t, despite his “profound disagreement” with Bagshaw. “I am now going to skip a flight in an attempt to reach you. Sally I don’t know what is going on, but for the sake of the City will you please speak with me?”

The following week, Murray scheduled a press conference. Bagshaw was given no word on what it would be about. It turned out to be a walk-back of his original plan, in which he denied that he had set any deadline. But there was no show of collaboration with the council.

When reached for comment, both Bagshaw and Murray expressed a mutual desire to work together moving forward.

Shutting the Jungle down without a clear mitigation plan for its residents was always going to spur a backlash. But Murray did not appear to expect pushback from Bagshaw, a friend and ally on the council.

“The mayor was exasperated about the difficulty in developing a consensus on how to move people out of the very dangerous situation in the I-5 East Duwamish Greenbelt,” said Murray spokesperson Jason Kelly in an email. “The mayor was committed to the idea that every resident in that area receive personalized attention during this initial phase of intensive outreach. The significant time difference between Asia and Seattle further complicated communications.”

The Jungle is a dragon that many Seattle mayors have sought to slay, but to no avail. Murray has attempted to distinguish himself from those past efforts by contending his approach is more compassionate, more deliberate, less destructive.

Bagshaw’s resolution threw doubt on that image. So Murray did what he’s known for doing: He got angry.