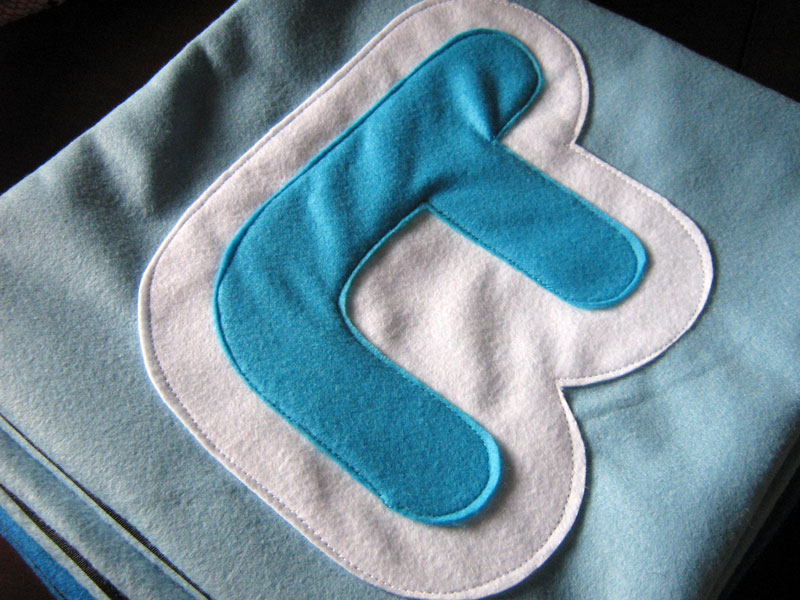 Like so much about Twitter, the prevalence of fake accounts on the service is a strange and mostly pointless thing to think about. But because I gravitate toward these kind of thoughts sometimes, I ran a quick search to see which local politicians, media organizations, journalists, and columnists had the most following them.

Selling fake Twitter followers, odd as it may seem, is a multimillion-dollar business. Buyers include politicians wanting to project an image of wide support — the fact Mitt Romney’s account once jumped by 116,000 followers in a day is an example. They’re social media managers at companies, seeking to impress their bosses. They’re media organizations aiming to demonstrate wide reach, perhaps in an effort to appeal to advertisers.

And in the case of the South Seattle Emerald and its editor Marcus Green — both leading the pack when it comes to fake followers in local politics and media (see graphs below) — it’s a case of an overeager marketing firm they hired and subsequently parted ways with, Green says.

There’s no firm definition for what a fake Twitter follower is, though nearly everyone on the service seems to have them. Some are zombie accounts built to tweet out spam. Some are empty accounts with only an egg for a picture, built to pad the follower numbers of the accounts purchasing them.

And it can get deeper. Erica McGillivray, Senior Community Manager at the online marketing firm Moz, once saw someone pre-program “bots” to tweet at each other during a conference, using the event's hashtag, to either encourage or offer the illusion of audience engagement.

“It’s not as common as it once was, but there’s still people making a lot of money on fake Twitter accounts,” McGillivray says. 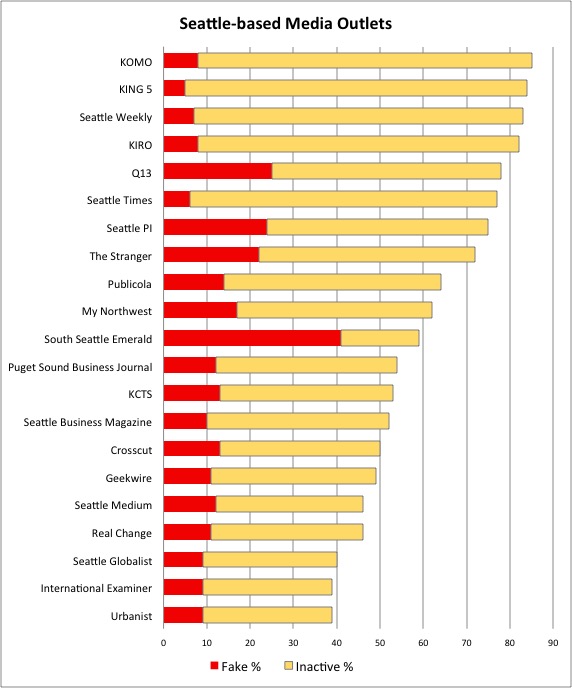 My interest in the subject began years ago, when former Speaker of the House Newt Gingrich bragged about his Twitter followers during the 2012 presidential campaign, and it turned out nearly all of them were fake.

Reminded of Gingrich’s existence by the recent election, I looked up Crosscut’s numbers on a whim, using a few of the analytics tools out there. I then looked up every other Seattle-based media organization, as a point of comparison. Then myself. Then almost 100 local politicians, journalists, and columnists. Things escalated quickly, you might say.

Before diving into the results, a quick note about methodology. This analysis began with a tool called TwitterAudit, but it ended up delivering over-broad results — for example, it stated nearly half of the followers for Seattle Weekly and various TV stations were potential fakes or “inorganic.”

This didn’t ring true, and looking at their definition of “fake” confirmed the hunch. For years, I used Twitter as a glorified news and opinion feed, and never posted. Even now, I mostly just retweet stuff. No one has any great reason to follow me.

To TwitterAudit, I would have been considered fake. People like me, however, are often the type to follow media organizations and journalists. A tool provided by social analytics firm StatusPeople — which appears to be the most popular on the market — breaks things out by “fake” and “inactive,” and is therefore more reflective of how people use (or don’t use) the social network. 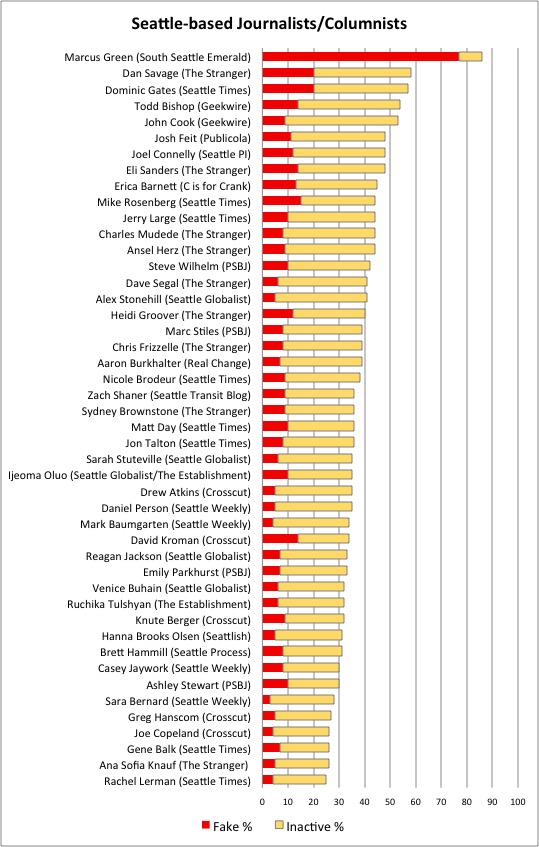 In my hour or so of Twitter research, I expected to topple a major politician or two, perhaps upset the balance of power in Olympia. But learning of the two aforementioned frontrunners soured the whole thing. The South Seattle Emerald covers local stories traditionally ignored by mainstream media, and provides a forum for writers underrepresented in the industry. It’s a really worthy endeavor.

But numbers are numbers, so I grabbed some drinks with Green and brought it up. He told me that after parting ways with the marketing firm in the last year or so, all of their new Twitter followers should be legit.

The main takeaway from this audit is how few Twitter users actually interact with the service, and how common robo-accounts are. While there are accounts with a high percentage of their followers engaging with posts — such as current candidates for Seattle’s U.S. House of Representatives seat Pramila Jayapal and Brady Walkinshaw — they’re a rarity.

For nearly every local politician or news organization, at least 40 percent of their followers are fake or inactive. It helps explain why Twitter is having trouble scouting a financial future.

Beyond fake followers, Moz’s McGillivray says that there are tons of dummy accounts on the social network that exist to “like” or retweet things. This is an attempt to trick accounts into following them back, or to sell another of what she calls “vanity metrics,” similar to followers. 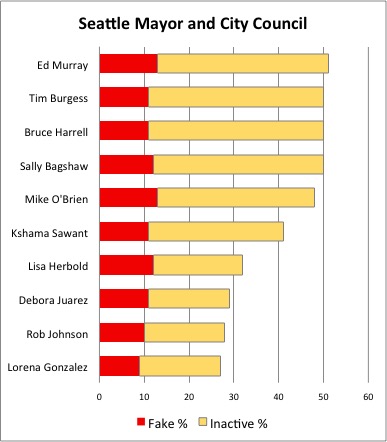 Attempts to grow Twitter accounts “unorganically” can backfire, however, and McGillivray encourages users to clean out the dummy accounts using tools like ManageFlitter.

“If you’re actually trying to do something, like drive people to your publication, these accounts are not reading your articles, they’re not voting, they’re not buying your product,” McGillivray says. “You’re sending out messages, but no one’s engaging, and you might get punished for it on the platform."

"It's kind of a tricky game to play on Twitter."

Update: While this analysis attempted to look at every major Seattle-based publication, it neglected to include City Arts. Their amount of fake followers is nine percent, and inactive is 41 percent. If you are a journalist, media organization, or politician that wants to be included here, just write the author.