With Trans-Pacific Partnership, the Battle of Seattle goes mainstream 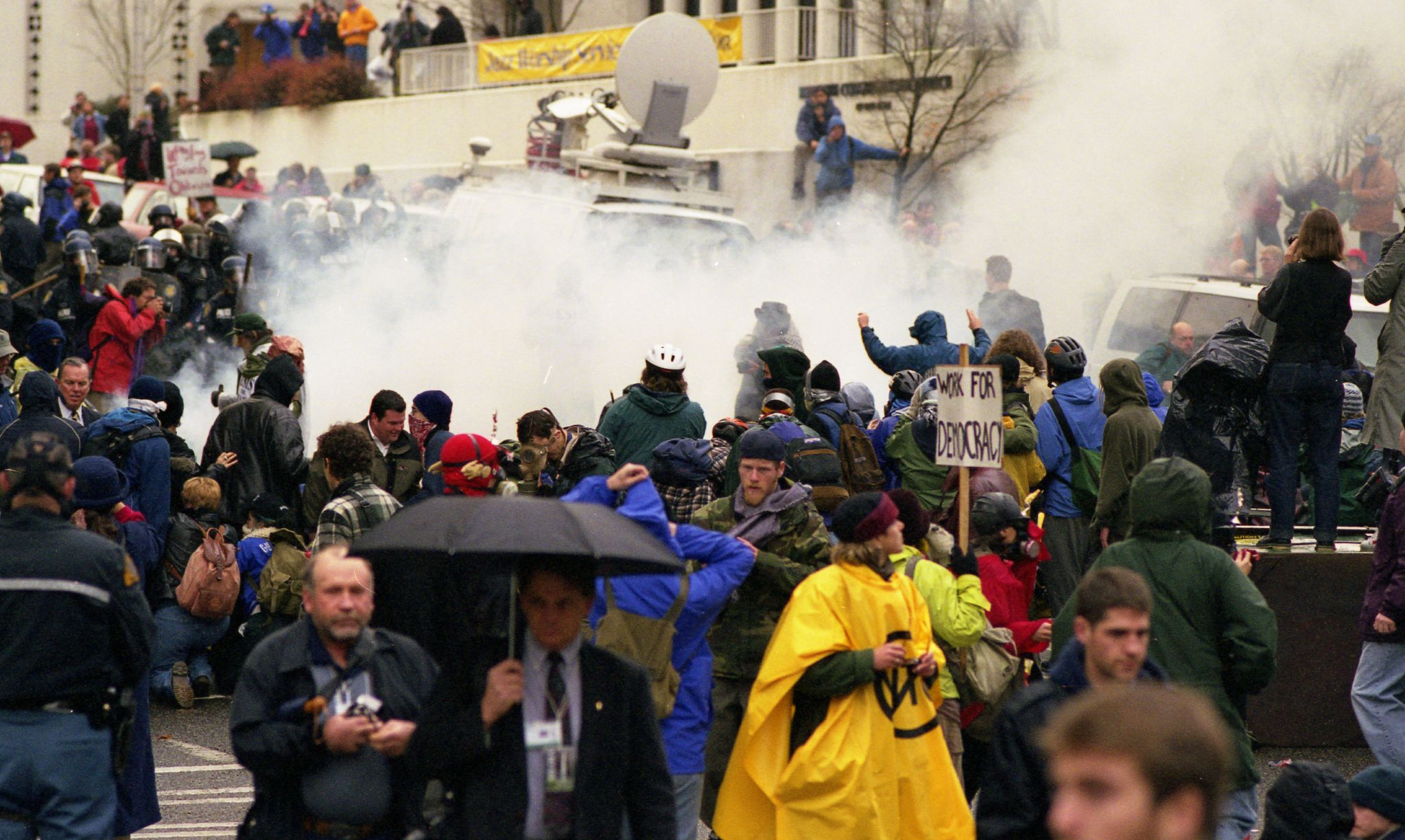 Police used tear gas against demonstrators during a 1999 WTO conference in Seattle.

The WTO anti-globalization demonstrations of 1999 — the so-called “Battle in Seattle” — have pretty much faded into history. Some have debated their lasting effect — were they a tribal tantrum, or did they forge lasting coalitions that are skeptical of globalization? Most would probably say the former.

But this election cycle is seeing a revival in Seattle-style free-trade and globalization skepticism — Brexit in Great Britain, for example. A former colonial empire still at the center of international finance has voted to secede from the European Union. At home, Donald Trump has capitalized on populist rage, seized the Republican Party’s nomination, and is running a nationalistic campaign against NAFTA, China, Mexico and immigration. On the left, Bernie Sanders ran a strong campaign that mobilized the millennial generation by bashing Wall Street, the Trans-Pacific Partnership and a “rigged” system that is making the rich richer at the expense of ordinary Americans.

Even Hillary Clinton has now pivoted to adopting free-trade skepticism to have a chance to pick up every Bernie voter possible. It’s a repudiation of her former boss, Barack Obama, and her current husband, Bill Clinton, a free-trade booster.

It was Bill’s visit to Seattle that panicked city and state officials to over-react against protesters in the name of national security. Calm had to be restored in time for Bill to be able to sip his Starbucks coffee without the whiff of pepper spray in the air. The politics are now such that Hillary has to run for president by distancing herself from the economics her husband did so much to advance. Perhaps she’ll be wearing a Sea Turtle costume on the campaign trail.

How did the anti-globalization, anti-free trade agenda find its way into the mainstream of campaign 2016? Some perspectives were offered at a recent discussion of Brexit, Trump and populism at Folio: The Seattle Athenaeum. Historian Robert Merry, former editor and publisher of Congressional Quarterly who now lives on Whidbey Island and has just written biography of William McKinley, offered some perspective on American populist movements — from Andy Jackson on. They always have an anti-authority thread (government, bankers, political elites=bad). The results of these periodic upsurges are often unpredictable, but they can cause the country to steer a new course. A central issue that is currently unresolved between the elites and the people, says Merry, is whether globalization is a boon or a menace. He posits this is the great divide.

This gets at the crux of what has changed between 1999 and now: Promises were made, namely that free trade agreements would generate jobs and prosperity. But terrorism, the Wall Street meltdown, the Great Recession, and the demise of the middle class are what happened instead. Morton Kondracke, former columnist for Newsweek and the New Republic and a onetime pundit on The McLaughlin Group, pointed out that the average working class white worker is making less now than in the mid ’90s, and that 40 percent of the financial rewards are going to the top 10 percent, a dramatic increase. In other words, the supposed beneficiaries of trade feel betrayed as they have seen the Rust Belt empty and folks in China get wealthier. Little wonder where middle and working class anger comes from.

Ian Toner, a Seattle-based Brit who is manager of strategic research for a West Coast investment firm, said the British Brexit vote was also influenced by pro-European economists who made prosperity promises that also did not materialize — indeed, economic conditions caused thousands of folks to lose their homes and livelihoods (like fishing) in villages where their families had lived for 1,000 years.

Katie King, a former Reuters correspondent and executive who was based in London for many years, spoke up for globalization. A globalized world is a reality, not a choice, and that the main issue is technological. For one thing, our technology has connected us globally, like it or not. We’re in the middle of a large re-set in terms of jobs and the future economy — factory labor is being replaced by robots and automation, and that is happening in China as well as the U.S. Younger people want freer movement and cross-cultural connections. Millennials get this — in Britain most saw Brexit as a theft of their engaged future and opportunity. In the U.S., they turned out for Bernie en masse. Embracing a multi-cultural future, they’re not about building walls.

The WTO demonstrations in Seattle made strange bedfellows, like liberal Ralph Nader and conservative Pat Buchanan who articulated the left and right of the anti-globalization movement. Self-exiled from the GOP at the time, Buchanan was running for president on the Reform Party ticket and came to Seattle to show his support for blue collar workers who hated free trade. His fellows in the Reform movement included one-time Klan leader David Duke (now running for office, again, as a Republican) and a man named Donald Trump, who while seeking the Reform Party’s nomination for himself called Buchanan “Attila the Hun.” Attila now supports Trump, and the two are ideologically indistinguishable on trade, nationalism and the “America First” rhetoric that echoes of the 1930s, fascist-friendly isolationist movement. In 1999, Nader was ramping up his critique of Clintonism and ran as the Green Party candidate in 2000, playing a role in Al Gore’s infamous defeat. In short, they were high-profile gadflies on the fringes of the mainstream.

Now, their views are center stage. You could swap Nader and Buchanan’s names for Sanders and Trump and you would hear the same arguments, bolstered now by some tangible evidence of economic upheaval and economic displacement and stagnation for workers and the middle class. Thus, populist turmoil.

Kondracke believes the problems with trade can be fixed with adjustments — tax reform, less regulation, more economic growth (he loves Jack Kemp and Paul Ryan), and even suggests possible reparations for workers who have been on the losing end of the globalization equation. An intriguing concept, to indemnify victims of economic fallout. How far are we from thinking seriously (again, Nixon proposed one) about a guaranteed annual income for Americans?

Much of the skepticism of globalization on the left has been about the corporate version. In Seattle, certainly, socialism is in vogue, even among young Amazonians, and many socialists believe not just in Bernie’s domestic revolution but a global one (see Kshama Sawant). How far you go with reining in the corporations and banks is the question. Is capitalism the inherent problem, or can unfettered capitalism be bridled to the benefit of people and planet?

The left’s view of globalization is largely free of the poisonous racial and ethnic nationalism that infuses the right’s paranoia and proposals for banishment (Muslims), walls (Mexicans), and “law and order” (against people of color, particularly black people). Also, the left’s emphasis focuses on the fact that many of the future’s greatest challenges are global, such as disease, poverty and climate change.

Corporate globalism is generating discontent; renewed nationalism is a populist rebellion but runs counter to major trends in technology and global engagement. The question for the future seems to be less a referendum on globalization per se than how best to shape a global system that keeps the haves relatively happy while dramatically lifting the have-nots; that respects cultural differences while embracing cooperation.

While we wrestle with the great global divide this year, it’s worth remembering that these debates are not new. The politics and rage over them has finally traveled from Seattle’s streets to Main Street America.