Crosscut's third Arts Salon will focus on the intersection of technology and art, with an emphasis on the democratization of art. The event will take place on Sept. 20. Get more information and register here.

Last weekend Seattle certainly felt like an arts town with the Seattle Art Fair, Out of Sight, the pop-up show In Context, and numerous other venues. Like last year, the Fair was gargantuan and overwhelming. A seemingly endless smorgasbord of art brought to us by well-known galleries and courtesy of Paul Allen’s multifaceted empire. Wandering about the sprawling exhibition, it was easy to become inebriated with a high of absorbing so much creative expression in one location.

The various related shows and gallery exhibitions, some of which extended into the night — like a dance performance at Soil gallery — collectively gave the impression that this city is in the midst of a great renaissance of arts activity.

But is it all that met the eye?

Just a stone’s throw (or perhaps a ball’s kick) away from the Allen-supported Art Fair’s CenturyLink Field Event Center location, the King Street Station once again hosted Out of Sight — dozens of works by local artists. The cavernous space is shot through with steel beams interwoven with mechanical ducts — like a set from classic dystopian sci-fi movie Brazil. The show was chockablock with works both deadly serious and highly humorous — often loaded with social commentary and perhaps lightly mocking the more corporate venue a couple of blocks away. One piece finally made good use of the vertical space afforded by the high vaulted ceiling. 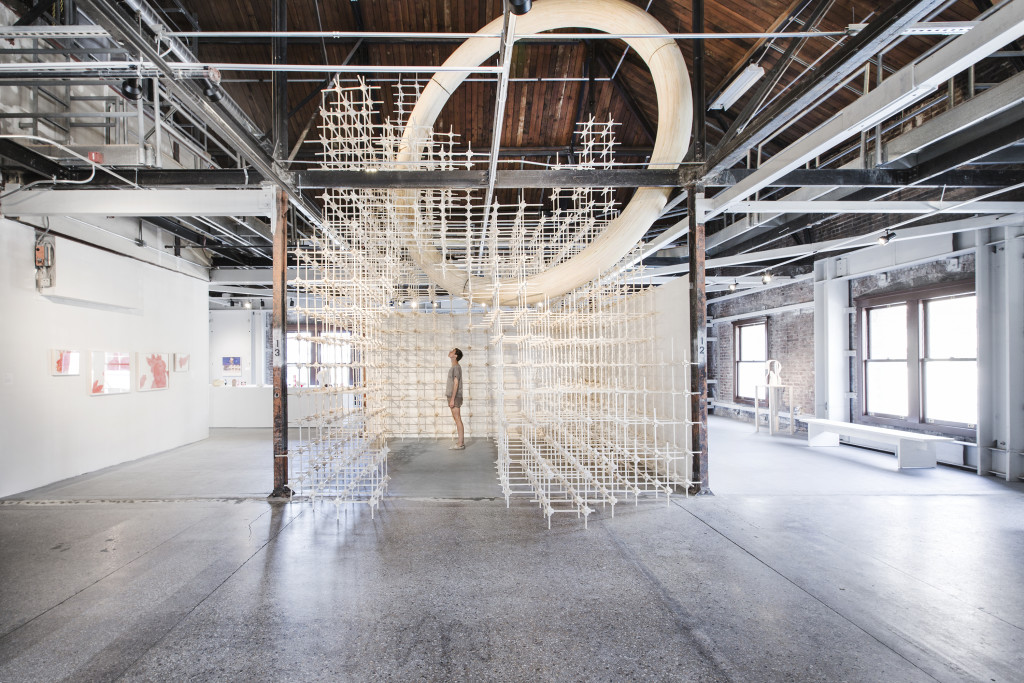 Literally in the shadow of the Piazza San Marco-like clock tower of the train station, In Context showcased works by a dozen artists — all women — in a temporary space that has been a vacant storefront for several years at a rather forlorn corner of downtown. I happened to catch a clutch of the artists and had a marvelous chat about their efforts to maintain a robust arts community in Seattle, despite the economic forces at work that seem to be snuffing it out.

While I want to suggest that something fundamental about our city’s growth as a tech center could be affecting Seattle artists, the technology boom means that landlords are raising rents so high that some artists have already decamped to Tacoma or Bellingham. Will Seattle someday find itself without artists actually living here? Perhaps we can buck that unfortunate trend.

The City has a program in the Office of Arts and Culture that matches building owners who are interested in leasing space to artists for temporary use. Commendable as that is, it doesn’t meet the need for permanent, ongoing places for artists to start up and develop their work. Arts and Culture is itself planning to occupy a part of the third floor of King Street Station for its offices, managing the rest for exhibiting art throughout the year. The City is using the grand structure for a community purpose after seeking and — fortunately —failing to find commercial tenants for the building.

According to Randy Engstrom, the director of the 32-person Office of Arts and Culture, the “goal for King Street Station is for it to be a place where we as artists, community and creative thinkers can connect, create and build bridges across cultures. We want King Street Station to serve as a nexus for our diverse communities, elevate arts and culture in Seattle and serve as lab for artists to experiment. We couldn't have imagined a better location, seated between two of Seattle's oldest and most culturally rich neighborhoods, and accessible by every mode of transportation in the city.” He’s referring to Pioneer Square and the International District.

Meanwhile, are we doing enough to nurture the people in the community who create art? Seattle has fancied itself as a sort of urban patron of the arts and, indeed, it has a long history of supporting both mainstream museums, theatres, and public art, as well as galleries and arts programming. Yet, artists — especially artists of color — are finding it increasingly difficult to maintain a presence in the city.

Something could be happening here to undermine the longstanding stature of our city as an arts community. As Seattle acquires a reputation for attracting technology companies and workers, symbols of creativity may be shifting from the older forms of creating by hand in a studio to electronic forms that are more ephemeral and less three dimensionally visceral.

Experiencing art is not done “virtually” but through a combined sense of visual, tactile, spatial and kinesthetic reactions — one takes in the work as presented by the artist in relationship to the moment and the surroundings — something impossible to replicate on a flat screen. But the “creative class” has become more tech-heavy than arts-focused.

It is almost as if we have reverted to a more primitive era of two-dimensional expression in which everything must be captured on flat screens, whether it is merchandise, music or the self. Witness the rise of the selfie stick where, rather than spending time actually enjoying a setting, the point is to display your body positioned momentarily with an object or space to elicit “praise by association.” Art is not about capturing the image but about discovering something about yourself or life that you had not known before. That requires time for quiet contemplation or, ideally, a spirited conversation with another person.

The recent weekend of multiple art shows, with many thousands of people leisurely strolling from one venue to another, demonstrates that many people are still hungry for an authentic, in-person viewing of art. The creators of In Context, Ann-Marie Stillion and Barbara Roberston, are attempting to expand the temporary pop-up gallery into a continuing venue. Their novel approach involves seeking out 10 investors who will commission works that will then be displayed for a year before the owners take possession. This effort, along with the annual art events and the presence of galleries and arts organizations, could form the basis of a dramatic change in that part of Seattle.

While I was passing between King Street Station and the In Context gallery nearby on Jackson Street at Third Avenue South, I was suddenly struck by something I had not previously noticed. Two new buildings are coming to completion on the east side of Fourth Avenue that have filled in gaps where there used to be depressingly ugly asphalt parking lots. Multiple layers of old and new architecture now wrap around the plaza of the station in a classic, European manner, with a sort of “station square” in the middle. The recently opened Seattle Streetcar line has added to the sense of confluence and access by connecting this area to a number of other urban neighborhoods.

This area could transform into a district that holds many arts venues and organizations, including 4Culture, on Prefontaine Place, the almost continuous row of galleries along Third Avenue South, artists’ live/work spaces and the rail station with its new arts programming.

There are still at least a half-dozen parking lots within a four-block radius of the station, not to mention a number of older buildings that could be repurposed or replaced. On several of these sites, with help of the City and private foundations, live/work spaces could be developed for artists at below-market rates, along with ground level spaces for galleries, non-profits, community rooms and cafes. This could help weave the surrounding neighborhoods of Pioneer Square, a redeveloped Yesler Terrace, and the International District into a seamless. connective centerpiece.

Over time, this could become a diverse, multicultural arts district, with a full range of people living, creating and showing art, along with other homegrown, locally owned shops and services — many catering to artists. On Prefontaine Place, the Tashiro Kaplan building, with its artists live/work spaces and galleries, along with the delightfully quirky and diminutive café called Manu’s Bodega already demonstrate how this synergistic relationship between art and commerce can work.

Imagine this expanded into a district of perhaps 16 square blocks that captures a similar mix of art and commerce, enlivening Seattle and its arts community.

The next Crosscut Arts Salon, Tech and the Democratization of Art, will take place Sept. 20. Details and ticket information here.