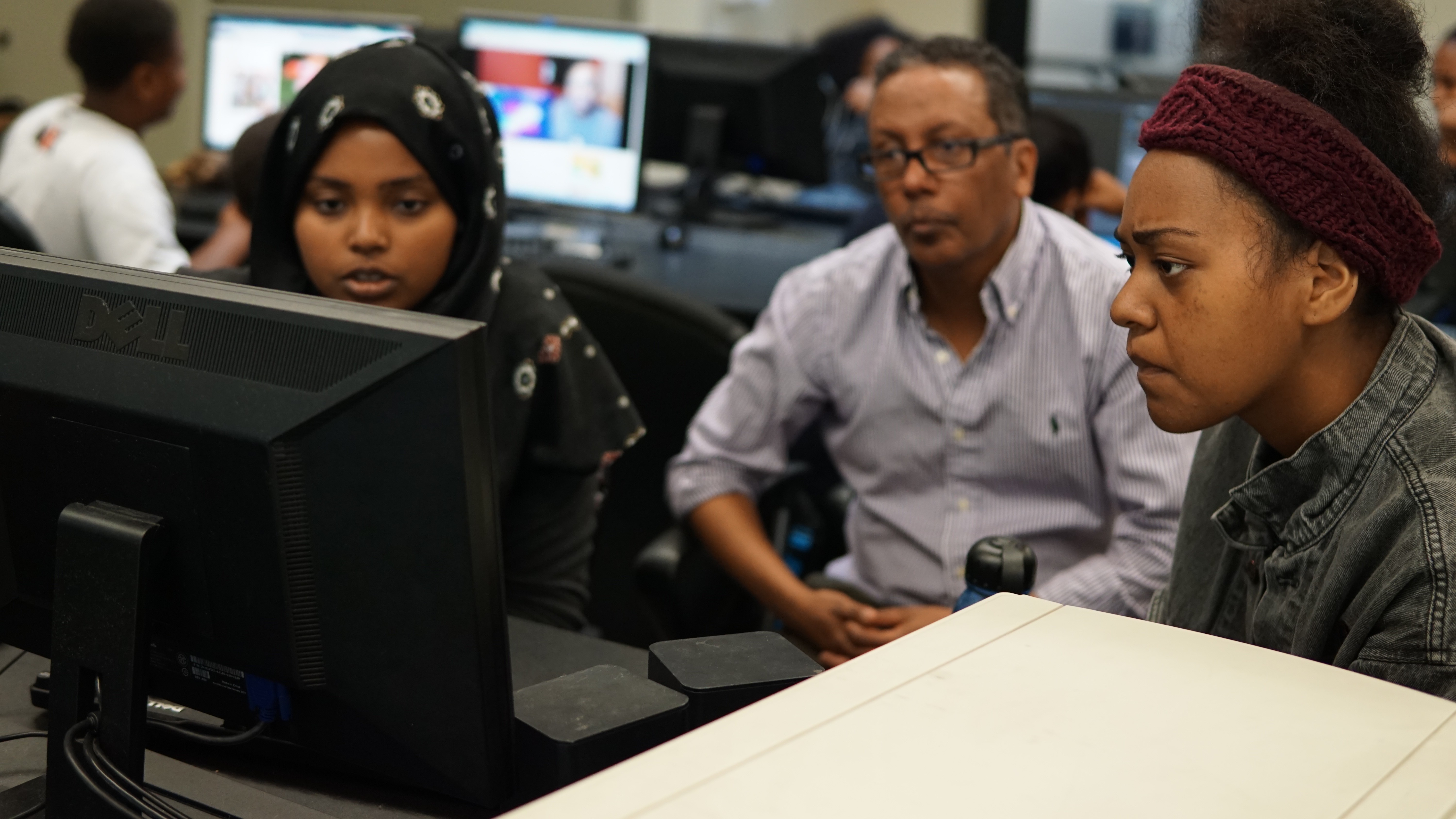 Two students work on the Yesler media project as a staffer assists.

In the next 15 years, Yesler Terrace will change in ways and to a degree never before seen in Seattle.

The $1.5 billion project to redevelop the neighborhood will lead to massive increases in housing and job opportunities. And what was once a small, low-income neighborhood — home to a diverse spectrum of folks from a wide range of ethnic backgrounds — will soon become a sprawling hub of economic opportunity for mixed-income residents. The population will go from 1,200 people to anywhere between 6,800 and 8,300 people to make Yesler Terrace by far the densest neighborhood in Seattle, with more business as well. If it all goes according to plan, the neighborhood will blossom into the homogenous, mixed-income focal point this city never knew it needed — or wanted.

It sounds great for the city, but for the residents of Yesler Terrace, one of the city's early public housing projects, one word comes to mind: gentrification.

As with most issues, young people play a unique role. The youth of Yesler Terrace and the Central District find themselves navigating the sweeping tide of a changing cityscape. Inevitably, the redevelopment project, which is happening in stages, will present challenges for them over the foreseeable future. Many of them have proven to be keen observers of what’s going on around them.

Earlier this summer, a group of students with the Yesler Terrace Youth Media Program — supported in part by the Seattle Housing Authority and the City of Seattle — set out to explore their neighborhood and document the impact of gentrification and Yesler’s redevelopment by engaging in their role as community activists.

“This is like a family here,” said Milena Haile, a resident in Yesler Terrace and student in the youth media program. “Maybe it’s not how it used to be, but I still feel like we have a better kinship and family community than the rest of Seattle.”

Haile said that it’s hard for people like herself to know how to interact with newcomers who she says don’t appreciate or understand the history of the neighborhood.

For Wyking Garrett, co-founder of AfricaTown, the Central District is the heart and soul, not just of Seattle and the Pacific Northwest, but of the country. He explained in the documentary how William Grose bought 12 acres of land from Henry Yesler in 1882 and established the Central District as a settling place for black people. Housing covenants and other legal restrictions prevented them from living elsewhere in the city. This forged the neighborhood's rich, diverse culture we see today.

“It’s one of the hidden jewels of the black experience in America,” Garrett told the students. “The Central District, AfricaTown, right here in Seattle.”

Fifteen students enrolled in the program this year. Five instructors of various ages and expertise work directly with the students and help them stay focused on the tasks at hand. The program draws on local experts in photography, video production and journalism to teach the students the basics of how to use a camera, interview people, and the like. The students then explore the community and, each year, investigate aspects of the redevelopment of Yesler Terrace.

Joseph Delos Reyes, an intern with the program, introduced me to the students and showed me the computer lab they used. “It’s interesting how the language has changed,” he told me later. “First it was about stopping gentrification. Now it’s about surviving it.”

Samira Mesfin, 18, is a veteran of the program. She enrolled in it three years ago, the same year she emigrated from Ethiopia, and has been coming back each year ever since. She said the program helps her communicate with those around her, along with a host of practical skills like editing video footage, interviewing people and finding out more about her community.

“When I first came here, it felt like back home,” Mesfin described what made Yesler, and the community center in particular, such a special place. “I learned about people’s experiences, how to make friends.”

She said that, in the past, the program focused on how the neighborhood is changing. This year, Mesfin and the other students focused on residents, small business and how gentrification directly affected the community itself.

The program spanned seven weeks during which the students worked on the project four days a week, six hours a day. This marks the fifth year since the program began. While the theme has remained roughly the same since its first iteration, this year the students were told to focus on gentrification.

“I haven't seen what they’re doing here anywhere else,” said Nebiyou Abunie, 19, who is now an instructor but started as a student in the program when it first began. “I really want people to not only get the message from the film, but also see these students, not just as filmmakers, but community activists. Hopefully it'll inspire others to do the same.”

A few weeks ago, they revealed the fruits of this year's labor: a 20-minute video — which was screened earlier this month at the Yesler Community Center— and an exhibition of photographs, some of which are displayed at the community center while others will be on display at Seattle City Hall until Sept. 2.

After exploring the neighborhood's past and present, the video ends with a quiet, moving emphasis on the people of Yesler Terrace: "We are a community," the students say in unison. "Our voices will be heard."