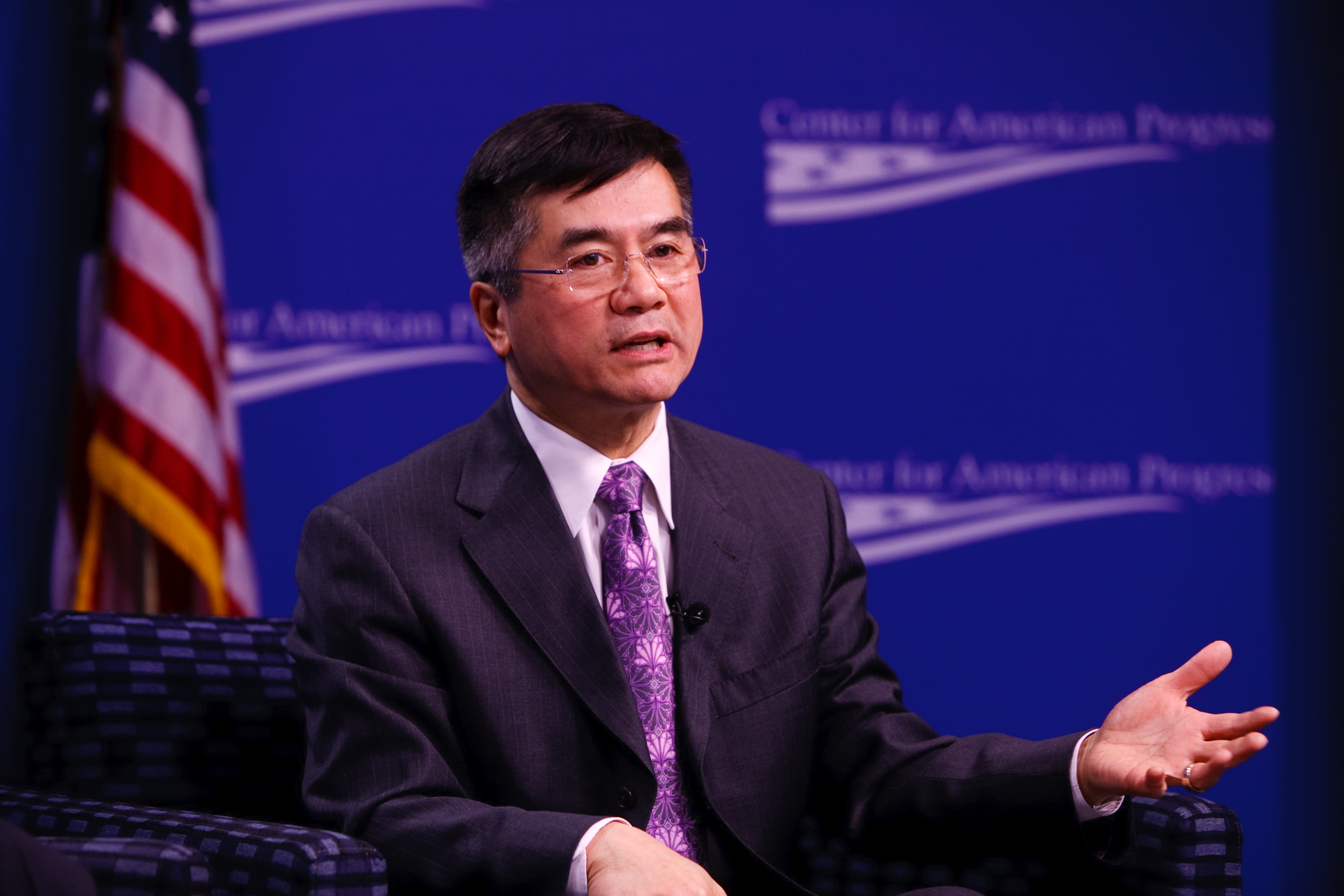 Former Gov. Gary Locke is one of the biggest success stories in Washington history. Raised in Seattle’s Yesler Terrace housing projects by working-class immigrant parents, he eventually became the nation’s first Chinese-American governor, as well as U.S. Secretary of Commerce and U.S. Ambassador to China under President Barack Obama.

Dave Ammons, who served as Associated Press reporter in Olympia from 1971 to 2008, says Locke is generally seen as "straight-laced" and "Boy Scout-ish" by the local press corps and the public. His status as an Eagle Scout is central to his public image in Washington. This helps explain why many were recently surprised to learn he sold his D.C.-area home to a wealthy Chinese businesswoman for $1.68 million while he was U.S. Ambassador to China, after allegedly convincing her brother that he was “desperate” to sell.

A former White House chief ethics counsel called the move “not appropriate.” Craig Holman, government ethics watchdog for D.C.-based Public Citizen, went further, telling me the sale was “highly inappropriate” and “gives every appearance that Locke used the ambassadorship for his own personal gain.” After stepping down as ambassador, Locke took a paid position with his homebuyer's real estate firm, American Pacific International Capital, as a senior advisor.

For the most part, Locke’s reputation is sterling in the state. Criticism, when it exists, has focused on the governor’s efforts to parlay his political positions into lucrative consulting gigs and jobs, and his ability to become a multi-millionaire in his short time as private citizen. A 2012 financial disclosure put the value of his assets between $1.6 million and $7.9 million.

But there have been many hints of scandal in Locke's past. Ammons notes they have simply not stuck to him like they would other politicians.

“You can tell when a stench follows someone around, or they're skirting ethical rules, and I never got that impression with Gary," says Ammons. However, he notes, this could be a symptom of a press corps that didn't truly examine Locke during his time in office.

"With the press corps stretching pretty thin at the time (in terms of staff), I don’t know how much digging was done on his campaign finances," he says. "There was probably a story here and there, but because he did have that squeaky clean image, it was a jarring image to contemplate him doing something really wrong. ... It wasn’t an aggressive press corps, perhaps, but I don’t think they were necessarily seduced by his charm."

In light of the surprised response to Locke's home sale, we present a primer on some of the former governor's more notable scandals...

Back in 2003, Locke handed Boeing a $3.2 billion, 20-year tax break, prior to Gov. Jay Inslee nearly tripling the break in 2013. The giveaway was needed to keep the company's manufacturing in the state, Locke argued. One big problem: the state advisory study that inspired the action — which cost taxpayers $715,000 — was conducted by Deloitte Consulting, a company with a very close relationship with Boeing.

As the Seattle Weekly reported at the time, Deloitte Consulting had received $5 million from Boeing for work in the years leading up to 2003. Between it and its sister company, Deloitte & Touche — Boeing's outside auditor — the firms had earned at least $52 million from Boeing between 2001 and 2002.

While the company didn’t directly suggest the tax break in their study, they hinted at the need for “extraordinary” action to keep the company in the state, noted the tax breaks that rival Airbus had received in Europe, and took credit for the state's action later.

"Not only did they [the state] do all we asked them to do, they also fixed the other things" that Boeing wanted, said Deloitte consultant Tom Captain to the Mercer Island Reporter. As Seattle Weekly noted at the time, these included a $24 million workforce training center and changes to unemployment and worker compensation laws. "I know what's important to Boeing,” Captain said at the time.

Though Locke’s tax break was meant to keep more aerospace jobs in Washington, Boeing nonetheless moved portions of its labor force to South Carolina and overseas after it was passed.

I joined Locke’s former speechwriter and journalist Peter Jackson on a panel with the former governor in 2015. Jackson asked Locke if he should have attached more "strings" to the break, at least as regards maintaining a certain number of jobs in Washington. He did not.

In 1997, Locke was slapped with the maximum fine of $2,500 by Washington’s campaign finance watchdogs, for failure to disclose the names of cash donors from two out-of-state fundraisers, as well as other details. The reason given for the months-long delay (until after the 1996 election) was “human error” on the part of volunteers.

But some questioned whether this violation had to do with some of the donors’ identities, and the location at which one of the fundraisers was held: Harmony Palace in New York City’s Chinatown.

As the New York Times noted, Harmony Palace was co-owned by Chan Wing Yeong, consider the leader of the Ghost Shadows gang, called “the biggest, most vicious, most influential Chinese gang in New York,” with ties stretching back to China. The gang has been tied to contract murders, drug-running and extortion.

Yeong eventually passed the baton to Wai Chee Chan, who was considered to be Yeong’s successor, both in control of the restaurant and the gang. He gave Locke $750 at the fundraiser.

The Seattle Times also pointed out that Locke held a fundraiser the previous year in New York City’s Jing Fong restaurant, which was sued by both the New York state attorney general and the Asian American Legal Defense Fund for stealing $1 million in tips from waiters and paying “slave wages.” The owner of that restaurant, Tsui Chun, also donated $750 to Locke at the Harmony Palace fundraiser for which Locke was fined.

Locke’s spokesperson at the time said he was unaware of the issues at either restaurant.

The biggest blemish on Locke’s resume, particularly in light of his questionable home sale, is his role in the so-called “Chinagate” affair, a major scandal for the Clintons and the Democratic Party that is largely forgotten now.

Simply put, it involved foreign nationals channeling money into U.S. politics. Various organizations —including the Democratic National Committee and the Clinton-Gore campaign — were eventually hit with a record $719,000 fine from the Federal Election Commission for fundraising that brought in contributions from China, Korea and other countries. A central figure in the scandal was DNC staffer John Huang, who raised $3.4 million for national Democrats, and eventually pled guilty to a felony conspiracy to make illegal campaign donations.

In addition to the money he raised for the Clintons and the DNC, Huang arranged six separate fundraising events for Locke’s 1996 bid for governor, raising tens of thousands in funds across the country.

The Democratic Party returned $253,000 of the Kanchanalaks' money, due to the belief it was funneled from overseas.

But Huang and Kanchanalak weren’t the only Locke donors tied up in the scandal. The list went on, including associates of Charlie Trie, an Arkansas restaurant owner who fled the country under allegations of funneling massive amounts of money into the DNC. Last year the federal government arrested Chinese billionaire Ng Lap Seng, in connection to his allegedly moving hundreds of thousands in cash through Trie.

A House panel eventually found that Locke had never "knowingly accepted illegal donations." Other investigations into his finances, including one by the Internal Revenue Service dating back to his time as King County Executive, also didn't pan out.

Federal investigations eventually connected Huang to many illegal actions. This included the collection of foreign and laundered money by Vice President Al Gore at an event at a California Buddhist temple. Which leads to Locke’s own issues in this regard…

Fundraising at a Redmond Buddhist Temple

Locke was never convicted of any illegal fundraising through the Ling Shen Ching Tze Buddhist temple located in Redmond, near Microsoft headquarters. But his multiple lucrative visits to the location nonetheless read as questionable, especially in light of the fines levied against national Democrats for their use of this tactic to raise money.

State investigators examined the $5,000 in donations raised at one visit, for example, which prompted Locke to give it back. It was promptly replaced by five $1,000 donations from church administrators. Conservative blogger Michelle Malkin, then a Seattle Times’ columnist, wrote that she spoke with monks at the temple who were alleged donors to Locke, but couldn't recall giving him money.

Locke was cleared of wrongdoing regarding the visits, but Malkin raised some relevant issues, including the prohibition on tax-exempt places of worship from raising money for candidates. She later argued the events were “clearly” used to launder money from other sources through "straw donors."

There are some time-honored images that are associated with Locke, most of them likable. There's his use of coupons to purchase Starbucks coffee in China, where he arrived as U.S. ambassador riding in coach class. There's the fact he used to keep plumbing tools in his car trunk, because he enjoyed the practice, or the pictures of him pushing his own shopping cart at the local Safeway.

Seattle PI columnist Joel Connelly, who has followed Washington politics for decades, says there was a time when the media would run annual profiles of Locke, always portraying him sympathetically as a "square bear." Some particularly inspirational profiles won awards. Connelly nonetheless remembers Locke as someone who was very skilled at avoiding hard questions.

"He was a very good dodger," says Connelly. "They (the scandals) haven’t stuck to him. Boeing has pulled some great coups, and that one (under Locke) may be the greatest. ... But he was very skilled at dissembling, at playing rope-a-dope on questions. He was very good at the politician work of using superlatives. He'd use the word 'great' constantly. Essentially you'd get sunny praise, and he’s able to slide off on other things."

This was my first impression of Locke as well. While questioning him on a variety of issues as part of a panel, I remember being surprised by how completely he stonewalled when asked about his support for the Trans-Pacific Partnership trade agreement, and whether it might be detrimental to organized labor in the U.S. Rather than answer, he ran out the clock by explaining other issues until the time to respond had passed.

Locke is a private citizen now, with a job at law firm Davis Wright Tremaine, his own advisory firm, and a busy speaking schedule at business conferences. As mentioned, he also serves as a senior adviser at American Pacific International Capital, whose Chinese owner bought his home while Locke was ambassador of China.

But as recent reports on the former governor show, just because someone is out of public office doesn't mean their record is necessarily complete.