Trump's people: Scenes from the rally in Everett 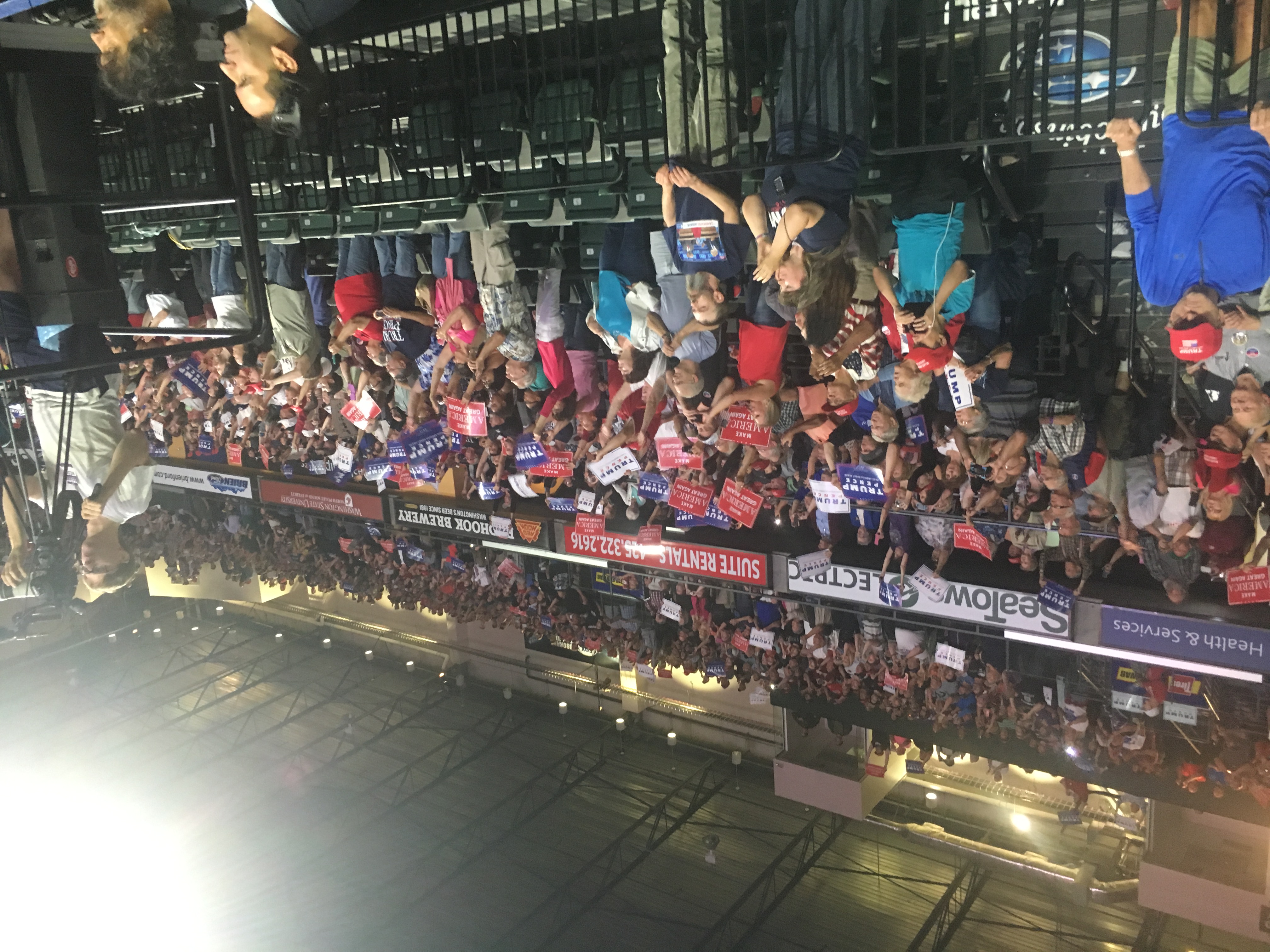 The first thing we were told at Donald Trump’s Everett rally on Tuesday night, after the opening prayer, was that this was a private event, and so the Republican presidential candidate had the right to eject protestors. If people in the crowd spotted a protestor, the PA announcer urged them to shout either “Trump” or “USA” as a homing beacon, and they’d be removed.

This would happen several times throughout the course of the night, and would prove quite effective. By the end, protesting was a sort of bull riding contest: How long could they hold on?

The roughly 10,000 people who turned out for the rally had plenty of time to get their energy up. Although Trump would not make his appearance until after 7 p.m., men, women and, yes, some young people began to flock to the entrance to the blue collar town’s Xfinity Arena before lunch. The line curved through more than 10 blocks of downtown Everett.

The waiting crowd broke into chants of “Trump, Trump, Trump.” Sitting in lawn chairs, positioned along Hewitt Street as if for a parade, they ate pizza from down the street. Seizing the captive audience, salesmen walked the line hawking hats ($20) with a now familiar phrase about the state of America, T-shirts fit for a Twisted Sister or Guns N' Roses concert, and posters pairing Hillary Clinton with Monica Lewinsky, or putting the Democratic candidate behind bars.

When police officers on bicycles — from Everett, Bothell, Seattle and Bellevue — rode past the waiting crowds, they were cheered with an enthusiasm clearly meant as a response to the criticisms police have faced around the country.

Jim Ryan, 72, from Shoreline was there. To hear him tell it, Jim has an uncanny ability to cross the paths of the candidates. Once upon a time, he did business with Mr. Trump, he said — something to do with a data center. “He’s an honest businessman," Ryan said. "I sent him $10 the day he announced he was running.”

Hillary Clinton? Ryan said he delivered papers to the Rodhams when he was young. They stiffed him. No character, he said, no class in how they treat the waiters, the taxi drivers, the lowly people like he once was.

There was Michelle, unwilling to share her full name, not for distaste of the media but because she works in Seattle and preferred co-workers not know where she was. She described the attitude toward conservatives in Seattle as “bigotry.” “It’s acceptable for liberals to say what they believe, but not conservatives," she said. "I want to live in a country where people can disagree.”

Michelle was the only Trump supporter I talked to Tuesday who called some of his actions “stupid,” specifically his scrap with the Khan family. But he was sorry, she said. He will change.

Protestors hid from view before the rally, holding a press conference instead, out of sight of the arena in Clark Park. Speakers included the mayor of Everett, Ray Stephanson, an older military vet named Michael Boe, and Maurice Barnes and his daughter Amyah. Barnes worried the Trump rally was teaching Amyah bad lessons about the state of racial equality in America.

Inside the arena, a cover band played Tom Petty's “Won’t back down,” Daft Punk's “Get Lucky” and Lady Gaga's “Poker Face." Their set was only about 15 minutes long, and they soon needed to start repeating songs. Luckily, they were afforded occasional breaks as the mega-screen played anti-Clinton videos to the captive audience. One favorite was a Pac-Man spoof where Hillary Clinton is the old video game character, the dots are her emails and the ghosts are the FBI.

Finally, Reince Priebus, the Republican National Committee chairman, and Rudy Giuliani, the former New York City mayor, warmed up the crowd. It was like Carol King making a surprise appearance at a James Taylor concert.

When Donald Trump hit the stage, protesters clashed with his supporters outside the arena enough that the police stepped in.

For as off-script as Trump is supposed to be, his speeches now are surprisingly predictable. He emerged from the bowels of the arena to “I’m Proud to be an American,” and after a quick justification for why he’s in Washington (“We’re going to win”) he settled into his set list.

There were the old standbys: Immigrants are bringing drugs across the border, which he tied to Seattle’s struggles with opioids. Syrian refugees, he suggested through parable, are snakes who can’t help but bite. The media is terrible (although he did not specifically call out Crosscut’s coverage). And then there was his roof rattler bit about Hillary Clinton’s emails.

He tried out a bit of new material, but not all of it stuck. Trump lingered for some time on African Americans and the inner-city and how poorly they’re doing, repeating his “What do you have to lose?” line. He called the Democratic Party "the party of slavery, the party of Jim Crow and the party of opposition." At one point, he blamed immigrants for job losses among African Americans.

He paused after he said this, asked, “Is that a true statement?” and then said it again.

Donald Trump certainly won’t win Washington. But by the end of the night, people clearly thought he should. Such is the power of a political rally. For as blue as Washington may be, for a moment in Everett it felt as red as red can be. The protestors who believed otherwise were outside, or placed there in quick fashion.

Then Donald Trump left the blue collar town in his Boeing jet, which could very well have been made just down the street.