6 questions to ponder while you vote on Sound Transit 3 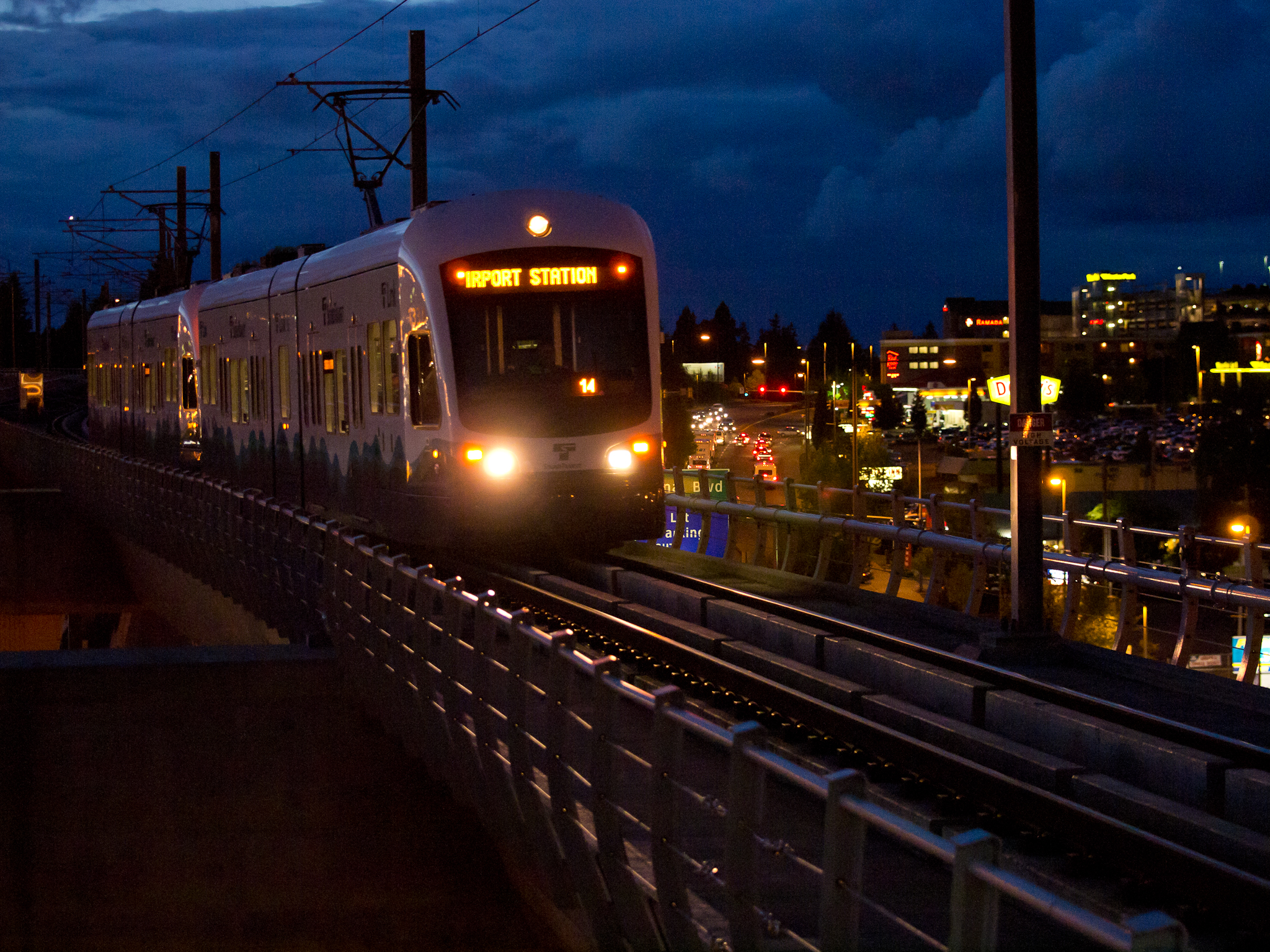 Over the past month, I’ve spent a lot of time in transit. I’ve also spent a lot of time on transit. When a journalist who doesn’t own a car finds himself writing a series on Sound Transit 3 — the regional transit agency’s proposed light rail, bus and commuter rail expansion — he begins to pay more attention to how he and the rest of the commuters in the region travel.

We, those of us who live in the Central Puget Sound, don’t travel spectacularly well. Depending on the metric, the city of Seattle, for example, has between the second and sixth worst congestion in the country. (I am currently typing from a shiny 594 Express that’s scooting down I-5 with all the enthusiasm of the wedding procession at an arranged marriage between two jars of molasses.)

We spend a lot of time stuck in traffic. But the ‘we’ here is complicated. The Sound Transit District encompasses much more than Seattle, and the region is stuffed with commuters of every flavor. Each of these commuters, from those in Everett to those in Tacoma, from West Seattle to Issaquah, has a different relationship with transit.

Which is also to say that for each of us, the calculus that will go into deciding how to vote on ST3 — Regional Proposition 1 on the ballot that will arrive in the mail any day now — is a little different.

Here are six of the main questions we should be asking ourselves as we ponder how to vote, and some tools for wrapping our heads around each of them.

Every voter will carry a different tax burden. While Sound Transit projects a median cost of $169 annually to each taxpayer, that number will vary drastically as a function of spending habits and home- and car-ownership. (The tax funding will come from sales and property tax hikes, along with bigger car tabs.)

In the second piece in this series, we suggested a relatively unscientific median cost of $7,000 per taxpayer spread out over 25 years. If you want to be a little more exact, Sound Transit’s ST3 tax calculator is here. The calculator the opposition favors, which takes into account existing Sound Transit taxes and household (as opposed to individual) assets is here.

If you prefer thinking about taxation in terms of deviations from the status quo — new spending to look forward to in 2017 — you might find the first one more useful. If you’re interested in tabulating your total contributions to Sound Transit over the years, you might prefer the second.

Brass tacks: The Central Puget Sound is expected to see its population increase by 800,000 in the next 25 years. If anyone claims they can design a transit system that accommodates 800,000 new residents and decreases congestion in absolute terms compared to today, they are either a liar or a magician (or both).

Proposition 1 is about offering commuting alternatives. The current median peak highway travel time from Bellevue to Issaquah, for example, is 18 minutes. By transit, that trip currently takes 25 minutes. The ST3 investments will bring the transit travel time down to 18 minutes by 2040. Highway traffic will continue to worsen, but you'll have alternatives.

You can find current commute travel times here, some of Sound Transit’s projections for transit travel time improvements in Table 8 here, and a map of ST3 projects here.

3. Are there cheaper alternatives?

Maybe. One of the main alternatives put forward by ST3 opponents is the express bus model known as "bus rapid transit." By some measures, bus rapid transit is absolutely cheaper than light rail. By others, it is not. What is clear: Effective BRT requires dedicated rights-of-way.

Back in 2010, even Sound Transit CEO Peter Rogoff, then at the Federal Transit Administration, noted, “You can get a designated lane just by painting it.” But here’s where then-Rogoff is wrong and now-Rogoff is right: Taking lanes away from existing freeways is the political equivalent of the cinnamon challenge. It will not happen in Washington.

4. Light rail works in the city, but what about the 'burbs?

It’s true that ST3’s costs per mile and costs per rider (necessarily) vary as a function of geography. And in the case of some projects in areas with lower population densities, these costs can approach astronomical. Three points are worth making here. The first is that cost-per-mile says nothing about the social or economic value of serving the miles in question.

The second is that because of Sound Transit’s subarea equity policies, its sub-regional tax expenditure is as close to proportional to its sub-regional tax revenue collection as possible. This means that voters in each sub-region (check your Sound Transit District map) will need to decide whether or not the costs per mile in their areas feel worth it to them. Proportionately speaking, though, project selection is already a function of the local tax base.

The third point is that further economic development is more likely to be catalyzed by rail-station investment than BRT-station and bus-stop construction. That’s how the psychology of transit-oriented development works.

Building out a light-rail spine across the region means encouraging private-sector investment outside of Seattle, but it also means facilitating access to jobs for non-Seattle residents. Concentrated business interests stand to make a lot of money from transit-oriented development, both via direct contracts with Sound Transit — funded, in part, by your tax dollars — and via eventual housing, retail and insurance contracts peripheral to the ST3 projects.

If a private-sector profit motive bothers you, perhaps you will be bothered by transit-oriented development. If you buy the logic that says access to transit is the single most important factor in predicting upward economic mobility, perhaps you will see ST3 as a necessary investment.

The employment and upward mobility arguments are made more than indirectly, though. Sound Transit and labor unions project that ST3 will create upwards of 200,000 jobs over the course of its construction. With respect to the state’s labor force, that’s not a negligible number.

Then there’s the alleged climate benefit. Sound Transit regularly trumpets the 130,000 metric tons of carbon emissions that ST3 will ostensibly prevent each year. That’s the equivalent of 19,000 homes’ electricity use annually — or shutting down a single coal plant for two weeks a year. (The numbers should be smaller anyway because of the unaccounted greenhouse gas emissions that will be generated during the projects’ construction.) Whether you think shutting down a coal plant for two weeks a year is worth $54 billion is a function of how much you care about effective climate policy.

6. Well fine. Where does that leave me?

In many senses, the ST3 choice boils down to that between an imperfect package and the hope that a better one will materialize. It’s an unfair choice to pose to voters, but it’s the choice that will appear on the ballot.

What a voter chooses to do with an expensive transit initiative will depend in part on her vision of Washington’s transit future. This vision could include light rail and bus rapid transit; it could include the latter but not the former; it could include self-driving cars that render light rail and BRT obsolete; or it could view all these forms of transportation as complementary. (The vision may or may not be agnostic to the question of which commuters will be able to afford things like self-driving cars and ride-sharing fleets.) One voter’s vision might rest on jetpacks; another’s on the resurgence of the monorail.

But voters haven’t always acted on or with vision. In the late 1960s, Seattle missed an opportunity to construct a largely federally funded subway system, and today, those in transit circles reference the Forward Thrust initiative with a sad, grimacing nostalgia.

If we vote this initiative down the way voters turned down Forward Thrust all those years ago, we could find ourselves, in 2040, regretting yet another chance not taken. Voters and ST3: just two trains passing in the night. As with all missed connections, we might wonder what could have been.

Or we might just smugly strap on the jetpacks.