Can dive bars make it in modern Seattle? 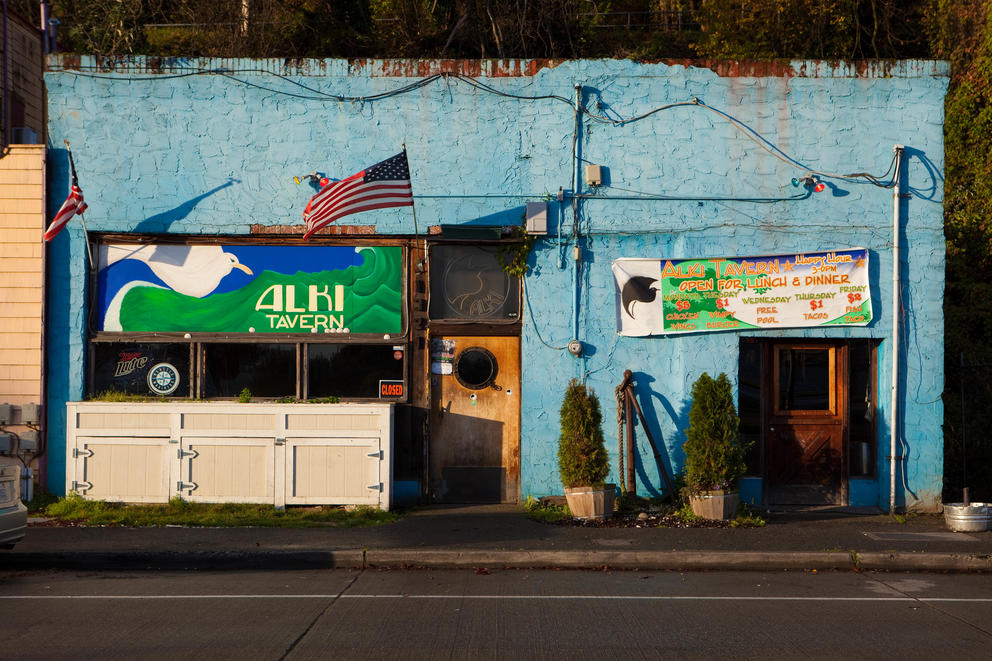 Alki Tavern in West Seattle, one of the small businesses the city has lost to development over recent years.

Seattle is undergoing unprecedented growth, at least in recent times. A Downtown Seattle Association (DSA) midyear report found there are currently 65 building projects under construction in the downtown core alone — even more by the time you read this. Projects are popping up at the rate of one per week. Many of us have stopped counting the cranes.

Development is happening citywide, and entire neighborhoods face transformation, especially those that have been havens to small businesses. The University District is being up-zoned and transformed into a tech hub. Little Saigon has been targeted for development, with some of its strip malls — home to many of your favorite Asian supermarkets and restaurants — soon to become residential and commercial high-rises. With development all around, West Seattle’s Junction and the California Avenue corridor, which are filled with small shops, are feeling the pressures of growth.

Challenges mount for the kinds of mom-and-pop, working-class, quirky and classic businesses (the Husky Deli!) that add character to city life. Commercial space in new buildings tends to be large, designed for big chains, banks and other retailers that can afford the rent. Older businesses are squeezed out as longtime owners or landlords, understandably, cash in for retirement.

Take my neighborhood as an example. City People’s Garden Store has been a longtime, beloved fixture in Madison Valley, a commercial stretch along Madison Street near its junction with Martin Luther King Way. The street is lined with small boutiques, restaurants, and offices housing, of all things, psychotherapists. It is a place you can go for some consolation: good red wine and a chat with your shrink.

The owners of the City People’s property have sold to a developer that plans to replace the current building with a large residential and commercial structure. Personally, I have no problem with seeing more residential there, or taller buildings. But the development also includes a PCC market with a large parking garage. I am a co-op fan — and PCC is, of course, a local business. But in this case, the neighborhood does not need a supermarket with a Safeway, QFC, Central Co-op (formerly Madison Market) and a Trader Joe’s nearby. And I fear for Bert’s, a longtime Madison Park market near the lake, owned by Red Apple and a fixture since 1937. I worry that the added competition will put Bert’s in jeopardy.

We say we value independent small businesses. In a Seattle Post-Intelligencer (seattlepi.com) story about the downtown development boom, James Sido of the DSA said, “Luckily, we’re in a city where there is still that connection to the local, independent retailer, where you can have that and you can have growth.”

Really? There are troubling signs. Mike Seely, who wrote an entertaining guide to Seattle’s best dive bars in 2009, reports that nearly one-third of them have closed since the book was published. They are, he says, “a vital part of our culture that provide working-class jobs.”

Dave Meinert, a club, restaurant and bar owner, talks about the pressures. “Any business in a one-story building is going to go away,” he predicts. The value of the real estate and the growing burden of taxes push properties onto the market for redevelopment. He says the property taxes on the building housing his iconic 5 Point Cafe in Belltown have jumped from $9,000 to $25,000 in recent years.

Seattle has lost plenty of iconic small businesses recently: Harvard Exit Theatre, Buckaroo Tavern, B&O Espresso, Alki Tavern, Piecora’s Pizza. We could all compile a list of places we wish hadn’t been swept away. My own fondly remembered relics include the ultimate downtown diner, The Dog House; Standard Records and Hi-Fi in Roosevelt; the bohemian U-District coffeehouse Last Exit on Brooklyn; purveyor of cheap flannel shirts and $5 Christmas trees, Chubby & Tubby; and Shorey’s, the rambling downtown bookstore you could get lost in.

Can this trend be mitigated? Some folks are trying to do something. Mayor Ed Murray has formed a task force, the Commercial Affordability Advisory Committee, to come up with recommendations for ways the city can support struggling small businesses. Incentivizing landlords to offer longer-term leases, for example, or exploring the possibility of small-business breaks in property and B&O taxes, or finding ways of aiding businesses with long-term, low-interest loans.

City Council member Lisa Herbold of West Seattle urged the mayor’s committee to consider an experimental program similar to one launched by San Francisco voters. In 1994, 693 small businesses closed in San Francisco; in 2014, the number of closures had jumped to more than 4,000. Alarmed by the danger to the city of losing character-defining hangouts, the voters in 2015 passed a proposition creating a legacy business registry.

Unlike, say, historic landmark preservation laws, which protect buildings, this legislation seeks to assist small, longtime businesses that are invaluable to San Francisco’s cultural fabric. Businesses approved for the registry and their landlords can receive grants and other benefits to help them stay in business.

The mayor’s committee in late September recommended developing such a program. Herbold says she will pursue getting funding for a small program in the city budget being considered now.

I can already think of places in my neighborhood I would nominate. The Attic and Red Onion bars, Madison Park Hardware, and Bert’s grocery, of course. San Francisco’s program has a cap of 300 businesses a year added to the registry.

Such a program might be a tough sell in Seattle. Here, we embrace the new; San Francisco has a much stronger sense of its history. Still, both cities are wrestling with massive new development that displaces small businesses and favors large chains.

We’re creating walkable neighborhoods, but we need to make sure there are still thriving small businesses — in other words, unique places to walk to.