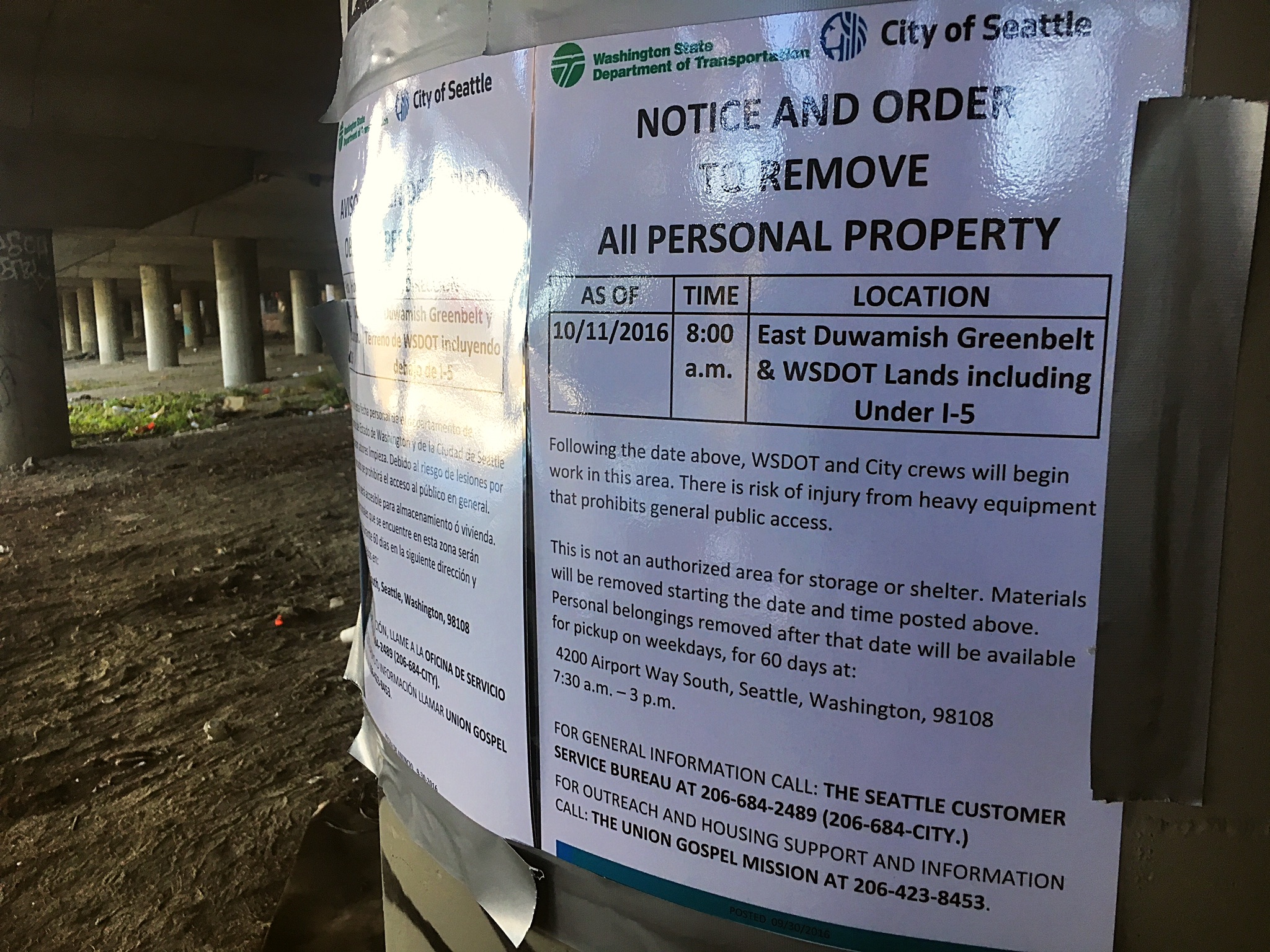 Divisions began forming within the Seattle City Council on Wednesday over a controversial ordinance to make parts of the city more open to homeless tent encampments. Seattle councilmembers Mike O’Brien and Sally Bagshaw each filed amended drafts of the bill Wednesday, drawing lines on a problem that’s even become a key issue in the state’s gubernatorial race.

Late last summer, homeless advocates from the ACLU and other groups drafted a proposal to overhaul how the city conducts cleanups of homeless encampments, calling on the city to define locations it considers unsafe (like over a highway), onerous to the general public (like in the end zone of a public school football field) or hazardous. The broad idea was that if a location didn’t meet one of these criteria, it would not be a priority for city “sweeps.”

O’Brien’s proposal closely follows the lead of the original. It would define “unsuitable” as “a public space that has a specific public use that is substantially impeded” by people camping on it. But it leaves certain parts of parks — areas not actively maintained or under restoration — open for camping. This could include wooded areas in Woodland Park, for example. Even if people already camp in those areas, the worry is that more will follow under this ordinance.

Further, O’Brien’s draft allows the city to immediately clear out areas seen as unsuitable or unsafe, rather than wait 48 hours as proposed by homeless advocates. But as in the original proposal, crews would still need to offer an alternative location for the homeless people being cleared from a site.

Bagshaw’s, on the other hand, is clearly an attempt at compromise between the homeless advocates and neighborhood representatives who fear Seattle is legalizing camping, and opening the door to homeless encampments on parks and even school grounds. "We worked for hours and hours and hours around this legislation," said Bagshaw. "At the end, we could not come to consensus about where people could camp. In the meantime, in the last few weeks my office has received in excess of 5,000 emails. Our phone has not stopped ringing. Everybody except three people opposed the council bill."

Bagshaw’s substitute more broadly defines unsuitable locations as "any public space where the space’s functions are unreasonably impeded because of one or more persons camping in that location.” The definition of “unreasonable” is left to future debate. It also seems to preclude camping in all city parks.

Most significantly, Bagshaw’s ordinance does away with the original proposal’s 30-day notice period for people camping on more suitable locations. Under her proposal, this would be reduced to 72 hours. "I thought that 30 days was crazy," she said. The requirement to offer shelter or housing, however, remains. "If I were to come to you and say, I’ve got a place for you to be ... I want to be able to do that and be able to do that in two days or 10 days, not wait 30."

The council was never obligated to consider the original proposal, but councilmembers O’Brien, Rob Johnson, Lisa Herbold and Kshama Sawant sponsored it on September 6.

The backlash has been fierce.

Councilmember Tim Burgess said the proposal “will do absolutely nothing to move people from homelessness to safe and appropriate housing.” Seattle Times columnist Danny Westneat compared it to Portland’s retracted experiment, which legalized camping during certain hours of the day. Even Republican gubernatorial candidate Bill Bryant has threatened to cut off state funding for homeless services to Seattle in reaction to the proposal.

Bagshaw’s Human Service and Public Health Committee was slated to vote on the ordinance Friday. But that’s now become a public hearing. A vote has been postponed until after budget season.