Everything voters need to know about the Treasurer's race 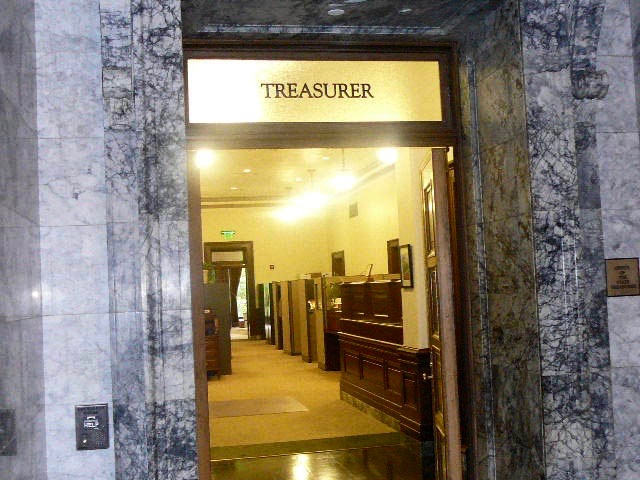 The Treasurer's Office in the state Capitol.

This year’s election features something unique in Washington history: a statewide general election race between two candidates from the same party.

Republicans Michael Waite and Duane Davidson outpolled three Democrats in the August primary, making it inevitable that the office of state treasurer will be held by a Republican for the first time since 1957.

Incumbent Treasurer James McIntire, a Democrat who decided against seeking re-election, isn't particularly happy about the situation facing voters. He argues that — political leanings aside — the top two primary system in Washington, which sends the two candidates with the most votes to the final ballot regardless of party affiliation, is failing to represent the majority vote.

“You had 52 percent of the vote cast in the primary for Democrats, yet the Democrats have no candidate in the general election,” he says. “It’s the stupidity of the system we have.”

The November vote — among other things — comes down to a choice between an investor from the private sector and a seasoned politician, both of whom are campaigning for responsible, nonpartisan money management.

“One of the most important roles of the treasurer is to be able to keep the governor and the Legislature from doing things that can harm our long-term financial management and to point them in the right direction,” McIntire says. “This is an essential government service.”

As the state's chief financial officer, the treasurer manages the state’s cash flow, investments and debt of all major state accounts, and will serve on the board of Washington’s Guaranteed Education Tuition program, or GET, which allows parents to pay for their child’s college tuition ahead of time to avoid higher costs in the future. The treasurer also plays an important role on the State Investment Board, which is responsible for the investment and management of public employees like teachers and police officers.

Davidson, a native Washingtonian born in Carnation, worked in the state auditor’s office before becoming Benton County’s treasurer in 2003. He was re-elected for his fourth term in 2014, and also serves as president of the Washington Association of County Treasurers and treasurer for the Kiwanis Club of Tri-Cities Industry Foundation.

Davidson’s campaign website points to his accomplishments in Benton County, including the complete automation of property tax processing, something that dramatically reduced the time needed to process and distribute taxes to various taxing entities. Davidson also launched a website that allowed taxpayers to obtain tax information on their property and make online payments and helped the development of a program to promote historical preservation in Benton County.

Waite promises that he will make sure the state borrows no more than necessary and that he will advocate for taxpayers in Olympia by delivering common sense money management.

A big difference lies in the experience they’ve accrued in the financial realm. Davidson has spent years in public service as the Benton County Treasurer; Waite is a private-sector financial analyst, investment manager and accountant who worked for the likes of Bill Gates at a private firm called Cascadia Investment and, more recently, a multinational real estate investment firm in Seattle called Bentall Kennedy.

Waite and Davidson both believe the treasurer’s office is a nonpartisan one, and that the management of state funds should be done free of Republican and Democratic influences.

“Once you’re elected, you don’t take party politics into how you run the office,” Davidson says, explaining that the treasurer is “basically the person keeping track of the books without outside influences.”

McIntire, who is staying neutral in the race, raised anger last year among Republican legislators for his advocacy of a state income tax, which he suggested should be a flat 5 percent. The next treasurer likely won’t cause any angst among their fellow Republicans on that score: both Davidson and Waite have promised they won’t support an income tax.

The state treasurer doesn’t get much attention during voting season — it’s a down ballot race and most people are distracted by other, more contentious campaigns. The outcome will greatly influence legislative discourse in Olympia nonetheless.