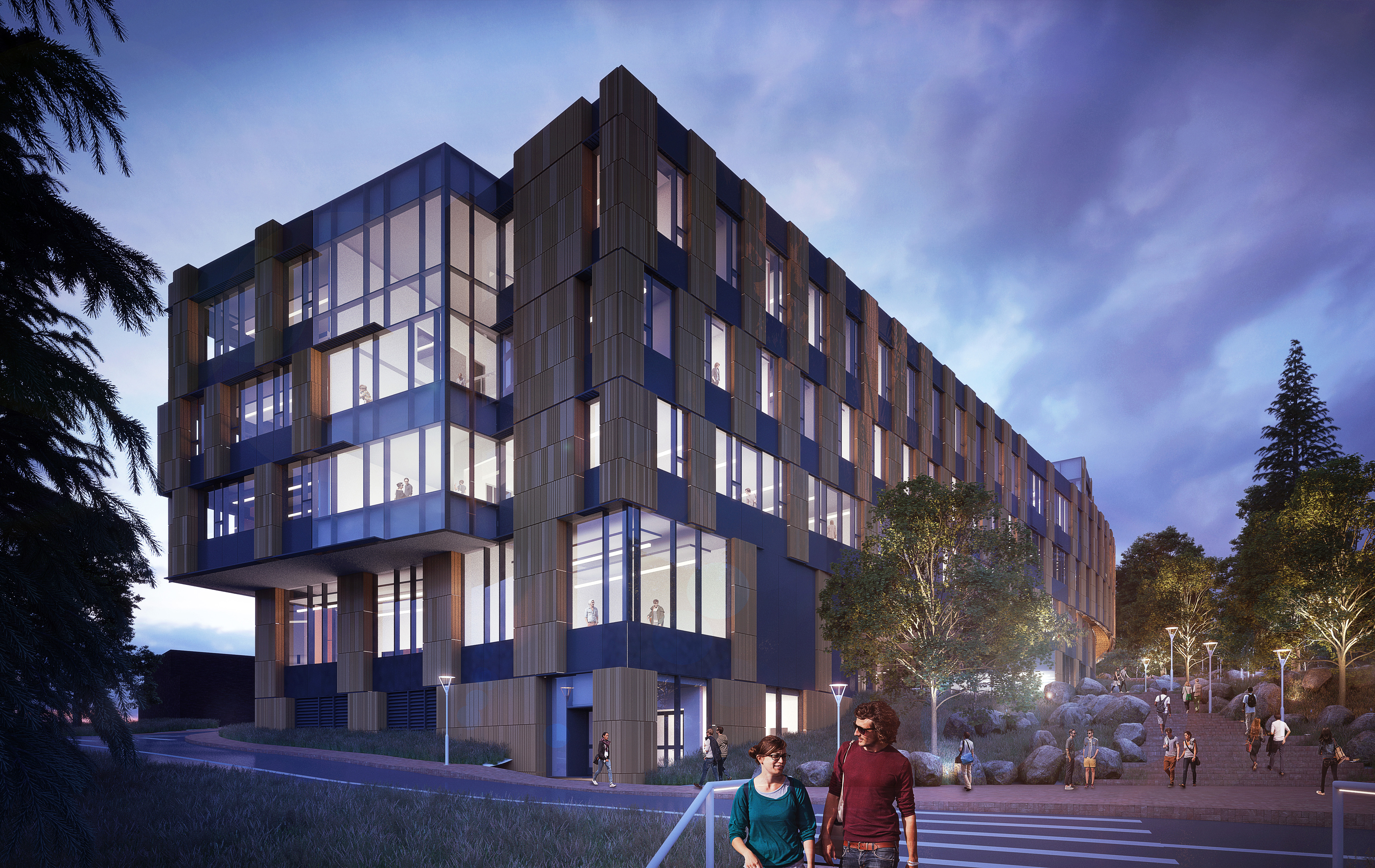 A rendering of the proposed new building for UW's Computer Science and Engineering department.

The University of Washington announced today that Amazon has pledged $10 million to help fund the construction of a second building for the Computer Science and Engineering (CSE) department on campus.

The new building will double the department’s student capacity and include new classrooms, education and research labs and a common area for undergraduate students, along with a 3,000-square-foot robotics lab and a 250-seat auditorium and gallery. Amazon’s contribution will go toward the funding goal of $110 million for the 130,000-square-foot building.

“UW graduates with skills in computer science are highly sought after, yet we are turning away excellent students who want to pursue studies in the field because we simply don’t have enough room,” said UW President Ana Mari Cauce in a statement. “This generous gift from Amazon brings us closer to doubling our capacity and allows us to better meet both student and workplace needs, which will benefit our state and nation.”

This isn’t the first time Amazon has supported UW. In 2012, the company provided two $1 million endowments to recruit new faculty members in machine learning, and last fall it launched the Catalyst Program, a funding project meant to seek out and support “bold, risky, globally impact projects.”

According to UW officials like Ed Lazowska, Bill & Melinda Gates Chair in Computer Science & Engineering — who personally lobbied Bezos for the $1 million faculty endowments — this most recent contribution to UW signals the tech company’s continued shift toward engaging more actively in the community.

“Amazon is a global company, but it’s also a Seattle company,” said Hank Levy, chair of the UW CSE department.

In April, Amazon offered up an empty hotel to Mary’s Place, a nonprofit fighting to get homeless women, children and families off the streets. Amazon paid for the cost of upgrading and converting the space, and the former Travelodge currently provides shelter for more than 200 people, rent-free, for one year.

Other Seattle area companies like Microsoft and Boeing have been big players in local philanthropy and civic engagement for years. For example, Microsoft has embraced a program started by one of its employees called Technology Education and Literacy in Schools, or TEALS, which worked to put tech workers in school classrooms to strengthen computer science programs. Just last month, Boeing awarded $6 million in grants to support STEM education programs in Washington, which focus on science, technology, engineering and math, as well as workforce training.

At a conference last month in Vancouver, B.C., Microsoft CEO Satya Nadella spoke of the importance of “commitment to core research and partnerships with universities,” citing the company’s support of DNA data storage research at the University of Washington. “That long view is what’s needed.”

A press conference regarding Amazon’s financial commitment will be held this afternoon. If funding goals are met, the new building will break ground in January 2017.