A Clinton organizer reflects on her DACA status 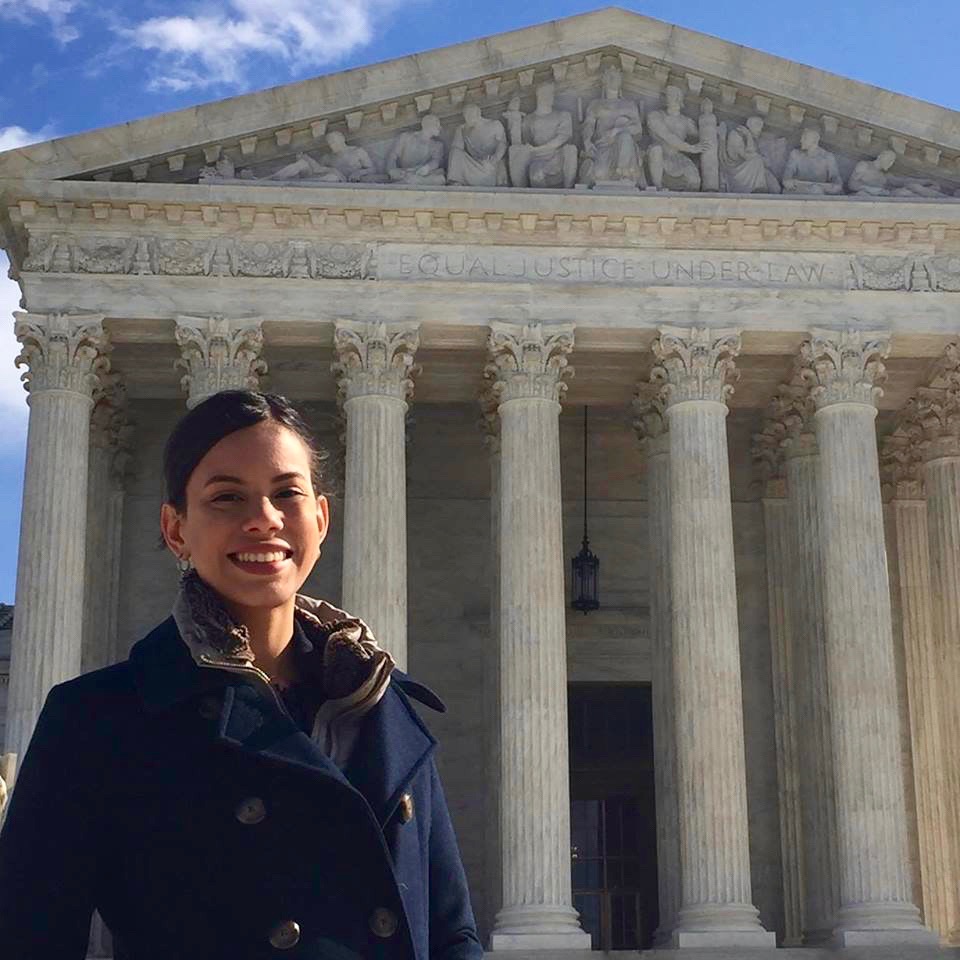 Graciela Nuñez in front of the U.S. Supreme Court

As a Latina woman, Graciela Nuñez is a part of one of the least represented demographics in the field of politics, but that has never stopped her from working in campaigns. At the age of 12, she campaigned for Obama’s 2008 bid for president, and four years later she became a fellow with Obama for America. Most recently, she worked as a field organizer for the Washington State Democratic Party, where she organized get-out-the-vote efforts for all candidates in critical districts at the south edge of Seattle and in Vancouver.

Many of the voters in these districts are immigrants, have weak English language skills and told Nuñez that even with citizenship, they felt disconnected from American politics. Many expressed that they avoided participation in politics out of fear, citing the hateful rhetoric aimed at immigrants as a reason to keep a low profile.

“Little did they know,” says Nuñez, “that I’m an immigrant, I’m undocumented and the campaign that was running against us doesn’t even want me to be in this country.”

Nuñez is a petite, wiry woman of 21 with a winning smile. She speaks rapidly and clearly, a slight accent surfacing when she gets fired up, which is often, and is as quick to offer compliments as she is to critique. She arrived in the states from Caracas, Venezuela when she was seven years old. Both she and her mother were on tourist visas, her father on a business visa.

Both parents received college degrees in Venezuela, but chose to leave a country torn by economic and political disorder to raise their daughter in a country where they hoped she would have greater opportunities. Nuñez’s parents spoke broken English and were forced to take lower-paying jobs while her father sought visa sponsorship through a business. After three years of denials, the sponsorship fell through, and the family’s migratory status shifted to undocumented.

The Nuñezes lived in Florida until Rick Scott became governor and aggressive Nativist policies were pushed. Fearing for their safety in an anti-immigrant state, the family moved across the county to Washington in 2011. They chose to settle in Seattle, a sanctuary city with policies designed to shelter undocumented immigrants.

“We know that we’re safe in Washington,” says Nuñez. She says the fear caused by the governor’s rhetoric drove many immigrant families out of Florida. “Kind of like what we see today with Trump,” she says, “the rhetoric is nearly identical, but there is a silent majority that agrees with it — no matter how hateful — which was a part of the surprise on Nov. 8.”

The gravity of her undocumented status didn’t hit Nuñez until the DREAM Act failed in Congress, in late December of 2010, just before Republicans took control of the U.S. House of Representatives. “It was always in the back of my mind,” she muses, but recalls a day in 2010 when her mother shook her awake in the early hours of the morning. Nuñez remembers the fear in her mother’s eyes: “She said ‘Graciela, the Dream Act didn’t pass, the Dream Act didn’t pass.’” But Nuñez was 16 at the time, she was on Christmas break — she says she told herself the problem would solve itself.

In June 2012, right before Nuñez applied to college, Obama introduced the Deferred Action for Childhood Arrivals (DACA) program through executive order. DACA allows young immigrants to obtain a driver’s license, a work permit and temporary relief from deportation when they meet certain requirements. Hundreds of thousands of DACA recipients — known as Dreamers — have become thriving members of society through the program.

“It gave me a sense of security,” Nuñez remembers. “At least I could work. I could continue to pursue my dreams. I just needed to go to college.”

And she did. In 2013, Nuñez was accepted to the University of Washington where she studied political science. The AP and IB classes she had taken at Interlake High School in Bellevue allowed her to shave a year off of college, but she needed to finance her degree by working two jobs. Nuñez worked as a researcher, focusing on voting rights.

“That’s what started gearing me up for the 2016 election,” Nuñez recalls. “I thought to myself — I see what’s happening here, I know what’s at stake. It’s 2013 but we need to prepare for Hillary.”

Fast forward to 2016, two years after the Washington State Real Hope Act was passed, which allows undocumented students to secure financial aid. Nuñez was accepted into the highly competitive Congressional Hispanic Caucus Institute, an internship program in Washington, D.C., where she worked in Sen. Maria Cantwell’s office and focused on healthcare policy. Nuñez says she was drawn to the issue because of her mother’s continuous battle with cancer, and the fact that her own family and many other immigrants she knew were unable to secure health insurance in the states.

Nuñez graduated in June. She thanks deferred action for her success: “DACA allowed me to become a qualified candidate for these positions; I was given opportunities that otherwise would have been a closed door.”

“I’m a Latino millennial — without voting power, of course — but I knew how it felt to be disenfranchised and how disillusioned Latinos my age are with the system,” she explains. “But at the same time we faced an inclusive candidate in Hillary Clinton, versus a demagogue.”

So Nuñez began working 90 hour weeks — “it nearly destroyed me”— but takes pride in her participation. “I want to tell future generations that I was part of a campaign that stood up against hate,” she says.

On the evening of Nov. 8, Nuñez was with campaign staff as the polls began to close. She says the shock in the room was tangible. “We all thought we were going to win," she says. "Everybody. Senior staff. Everybody.”

Nuñez remembers feeling numb when the election was finally called. “All of the doors that had been open to me, they closed,” she explains, “my competency, my experience, my motivation, my drive — it felt invalidated. … All of that is now challenged, questioned —it vanished with those five states that we lost.”

“Now you’re facing yourself as an undocumented person,” she continues, “and you’re even more vulnerable, even more exposed. You feel targeted when you’re walking down the streets.”

It’s no secret that Trump and many of his Republican allies have run a campaign on anti-immigrant sentiment, and the president-elect’s termination of DACA is a part of this. If Congress fails to act, Nuñez may lose her job and her identification. She laughs wryly at the contradiction: “It was my job to motivate people to vote. … Why am I being punished by those same votes?”

She says that moving forward will be the biggest obstacle yet, having never experienced overt racism or discrimination to the point where she may face unemployment. “How am I supposed to move forward,” she adds, “when Trump is threatening to come to my house and deport me back to a country that I don’t even know?”

But Nuñez remains fierce; she is motivated to continue her career in politics and defend the rights of Dreamers, immigrants, minorities and women. “The only way to solve this is to fight back,” she asserts. “But it’s up to those that are impacted to fight for it.”

“America is worth it,” she says, quoting Hillary Clinton. “And it’s up to me because I chose politics. It’s not an easy game. It’s dirty. But it’s up to those who are impacted to rewrite history. It’s up to us to fight for what is right.”

This story has been updated to reflect the Trump administration's announcement on DACA.