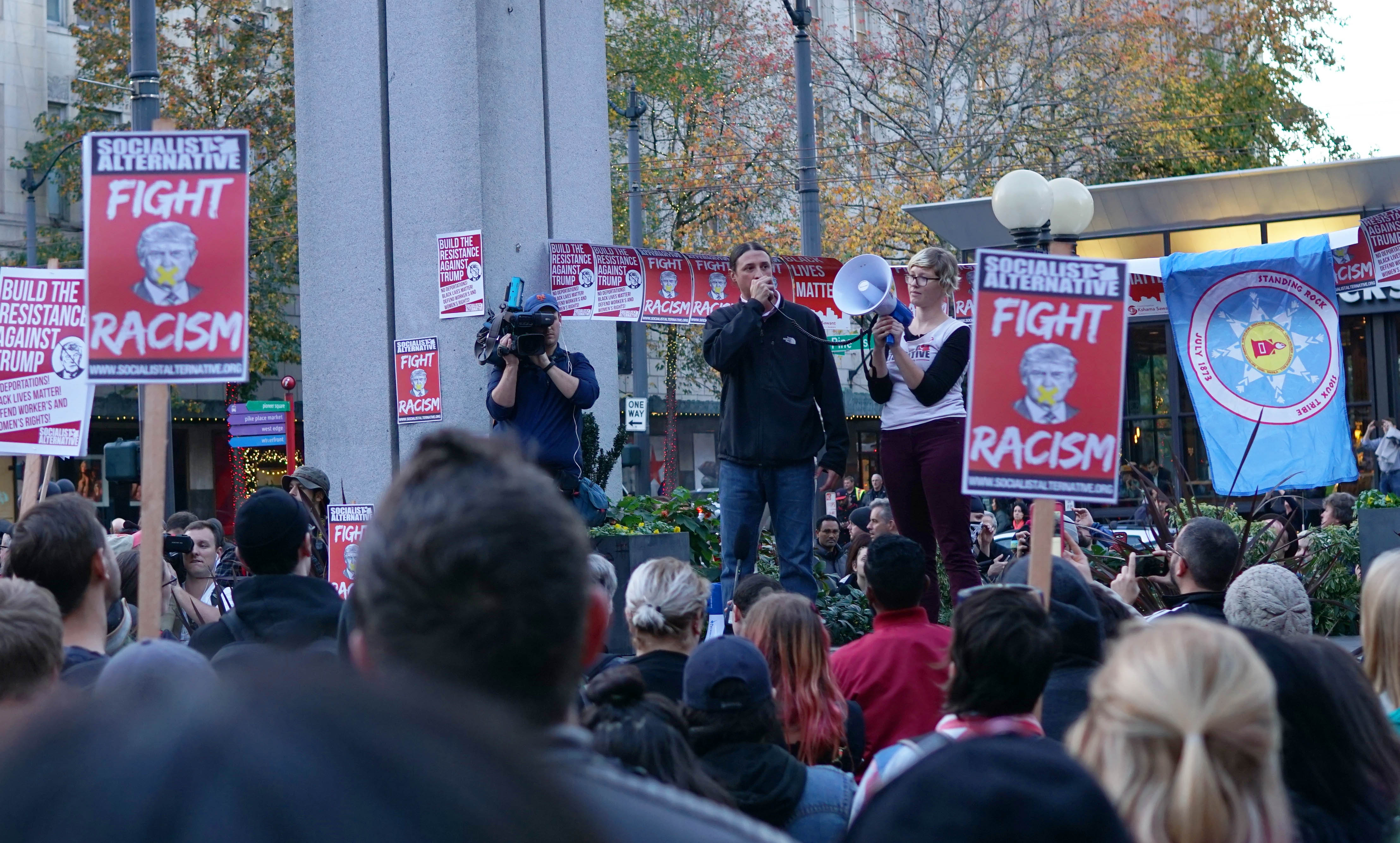 A protest Wednesday in Pioneer Square

It all seemed rather silly Wednesday, following Election Day: the political tensions between some Seattle City Councilmembers and Mayor Ed Murray, the occasional spats between Murray and the media, even the fight over how to best address homelessness. Compared to the shadow of Donald Trump and his threats of deportation, bans on Muslim immigration, punishment for an abortion and so much more, those once canyon-like Seattle rifts were mere sidewalk cracks.

Under the banner of Trump, Seattle City Hall, which has felt so divided at times, was united in opposition.

It started last night, perhaps as the political analysts began shifting their perceptions of the race, and seeing Trump as a possible victor. Some, like Councilmember Sally Bagshaw, openly wept. Elected officials and their staff haunted the halls with sagging eyes.

Mayor Ed Murray called a press conference and activists organized a rally, because in such a dark mood, what else was there to do?

In the conference, Murray pledged to fight back. “We have a decentralized form of government, which means we, Seattle, can make a difference,” he said. He pledged that Seattle would continue to protect undocumented immigrants as a sanctuary city, even if it meant losing federal funding, and that he was in touch with the Mayor of Mexico City and they were working on a partnership.

Councilmember Lorena Gonzalez fought back tears as she spoke of her own undocumented parents. Seattle will support its immigrant communities, she said. “We will not back down in the face of deplorable immigration policy.”

And Councilmember Debora Juarez spoke of her own hard lessons. “In 1972 at the Democratic convention, I thought Shirley Chisholm was going to be the next president….It hadn’t sunk in that racism and sexism were real.”

In the high-ceilinged lobby of City Hall, hundreds of people gathered. Many of them also wept. One by one, Murray, Juarez, Gonzalez, Councilmember Kshama Sawant, Wendy Martinez Hurtado of 21 Progress and Congresswoman-elect Pramila Jayapal gave elegant calls to action. Jayapal especially fired up her supporters, in recognition that she now represented part of the bulwark against Trump.

In the early hours of an inevitable Trump presidency, people are already wondering what this will mean for Seattle. Despite the hope that Cascadians can be insulated, the reality is that things will change.

“I’m very concerned,” said Murray when asked about federal dollars. “I think my colleagues around the country are very concerned.”

While jubilant after the passage of Sound Transit 3, transit wonks pondered the state of the more than $4 billion of federal grants written into its funding plan. It’s unclear whether the momentum of the Washington D.C. machine is great enough to continue carrying that money forward.

On the Affordable Care Act, Murray said Speaker of the House Paul Ryan’s comments that the votes were there to dismantle President Obama’s signature achievement worried him immensely.

On homelessness, Murray has long said his declaration of a “state of emergency” over a year ago was meant in large part to loosen the federal dollar spigot to support the city’s response. On Wednesday he all but gave up that message.

“I have to be honest. I’m not as optimistic that we will get help from the federal government,” he said. Suddenly, his suggestion of a homelessness levy from several months back sounded more plausible. “I think we have to explore that.”

Even police reform, driven by a federal consent decree, came up. Murray, Police Chief Kathleen O’Toole and Department of Justice spokesperson Thomas Bates all said the wheels were sufficiently in motion to finish reforms without federal meddling. But the fact that it came up at all shows just how worried Seattle’s leaders have become.

“I want you to see each other,” said Gonzalez, urging people to look around the room. “This is community. This is our community. And we have to recognize that every hour.”

Elsewhere in Seattle, the angst bubbled up and spilled over, sometimes in sadness, other times anger. At high schools in West and Central Seattle, students walked out, a phenomenon seen in other cities around the country.

At the University of Washington, hundreds of students gathered for what can only be described as a vigil: standing in a circle, they took turns speaking, sometimes crying, into a microphone. “I had faith that my fellow Americans could come together to overcome a politician whose rhetoric was based on xenophobia, racism, sexism, and general bigotry to my friends in the LGBTQ+ community,” sophomore Cameron Smith said. “Never before have I felt more like a minority. Never before have I felt like my voice doesn't matter. So if you voted for Trump then congratulations, you've continued what hundreds of years of white supremacy has strove to accomplish.”

And in the evening, Councilmember Sawant's political party-members from the Socialist Alternative organized a rally and march starting in Westlake Park. It ballooned to nearly a thousand people, waving signs begging for "walls against fascism." One-by-one speakers, representing latino, Somali, transgender and other marginalized communities, girded themselves with messages of resistance, fight. Asha Mohamed stole the show with an curse-word-laden call to arms to immigrant communities. En masse, the crowd made it's way down Second Avenue in protest, snaking for hours through the city. There were reportedly no arrests and the event, while filled with nerves and anger, was peaceful.

Seattle police said a shooting downtown was not connected to the march.

If Wednesday conveyed anything it's that Seattle, a bastion of liberalism, is unsure what comes next. And with that came fear, but also motivation. If the words of the many protests and rallies are to be believed, the age of Trump could be a spur in Seattle to lay a thicker foundation of progressivism than it has even now.