Trump is the new hero in Timber Country 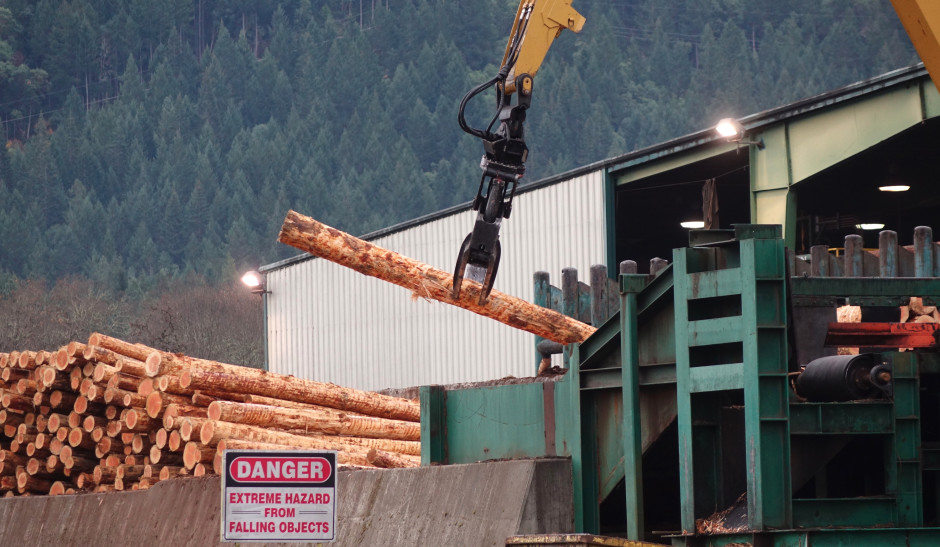 Loading logs onto the line at a mill in Glendale, Oregon.

In Riddle, a town of 1,200 people in the southwest corner of Oregon, neighborhoods end where stacks of sprinkler-soaked logs begin.

The town is surrounded by four sawmills in the heart of timber country.

Here in Douglas County, where about half of the land is owned by the federal government, Donald Trump won 64 percent of the county’s vote in this year’s presidential election. Trump’s victory has this community and others in the Northwest Timber Belt cheering and hoping better times are ahead.

“Riddle is really a close-knit community. We have very little division here,” said Riddle’s longtime mayor, Bill Duckett. “I think the people here in town, Douglas County, Southern Oregon are happy with how things came out.  I am happy with the way things went.”

The Northwest timber industry has changed dramatically over the past few decades. In the wake of environmental regulations and lawsuits, logging has declined on federal lands. Automation has reduced the number of jobs in the mills and forests.  And the economy and trade deals haven’t always been favorable.

But President-elect Trump has promised to change all that.

At a rally last May in Eugene, Trump appealed to rural Oregon and an industry he described as being hammered by federal regulation.

“Some things are going to be changing,” he said. “People were just tired of the same old same old.  People were tired of promises and no results.”

It’s unclear exactly how Trump plans on changing the game for timber jobs in rural Oregon. But with help from the new Republican-controlled Congress, the timber industry sees potential in a few key areas:

Jim Geisinger, executive vice president of Associated Oregon Loggers, said he’s waiting to see who Trump appoints to key cabinet and administrative positions before he gets too optimistic about the potential for regulatory changes.

“We do think there are some opportunities to push the pendulum back our way a bit and hopefully benefit the industry and benefit the communities that depend on it,” he said.

He’s hoping to see a Trump administration will “streamline” the process of analyzing environmental impacts of logging on federal timber lands and reduce the legal requirements so that lawsuits won’t be able to delay and ultimately block so many proposed timber sales.

“It’s almost impossible now for a land management agency to write an environmental impact statement that can pass muster in federal court,” he said. “It’s very easy for an environmental lawyer, litigant, to find a ‘t’ that wasn’t crossed or an ‘i’ that wasn’t dotted or an impact that wasn’t examined as thoroughly as they wanted to see it examined.”

The smell of Douglas fir permeates the cacophonous Swanson sawmill about 30 minutes to the south of Riddle in Glendale. This mill and a plywood plant down the road employ about 400 people.

Swanson said most of those logs are coming from privately owned timberland – but he’d like that ratio to change, given Glendale is surrounded by federally managed forests.

He’s hoping a Trump administration could help give his mills an additional supply of timber, but he knows it still won’t be easy – even with the GOP controlling Congress.

“But I’m realistic about what a single man can do in the White House,” he said. “He’s not the first Republican president we’ve had. His heart might be in right place, but it’ll take a long time to get policies that have got us where we are, back on track again.”

Meanwhile, environmental groups are preparing for a fight.

Steve Pedery, conservation director for Oregon Wild, said he is worried the timber industry could make headway on its longstanding wish list that would result in fewer environmental protections.

But easing environmental regulations won’t turn back the economic clock to the days before automation and technology claimed so many mill workers’ jobs, he said.

“The reality of how the actual economy works and what’s happened over the last 40 years is really going to be difficult to just waive a magic wand and change,” said Pedery. “It makes a lot more sense to look to the future and how we can build on the things that work today rather than looking back to 1974 and thinking about how we resurrect an economy that died 40 years ago.”

History shows just having a Republican president and Republican-controlled Congress is not a guarantee of success.

“The Bush administration surrounded itself with some pretty smart people, and they weren’t able to get a lot of this stuff done,” he said.

Pedery said he’s counting on Democrats like Oregon’s U.S. Sens. Ron Wyden and Jeff Merkley to take a strong stand – to the point of filibustering – against congressional action that would unravel landmark environmental laws like the Endangered Species Act or the Clean Water Act.

“While things might seem pretty dark and I think a lot of Americans are still in shock, we’ve been through some pretty dark times before,” he said. “I think at least speaking for the environmental community and my organization, the plan is not to curl up and go away.  The plan is to fight harder than we did before.”

With so few specific policy details released during Trump’s candidacy, it’s yet to be seen what tactics the new administration will take.

Walden, Oregon’s only Republican member of Congress, said he has talked with Trump about changing federal forest management, “and he was very open to it.”

“We’ve not had that kind of response under the current administration,” he said. “It’s been 'shut it down, lock it up, threatened monuments,' all of which is really divisive and not helpful.”

Walden is hoping some version of his O&C Lands bill will gain new traction with the new leadership and allow for more logging on more than a million acres of BLM forests in Oregon.

But even he is waiting to see where Trump goes.

“On timber I think there are some positive things we could do moving forward,” he said. “I’m not even going to begin to think I can speak for this new administration. They’re trying to get organized and put together the first rung, the cabinet secretaries. And we’ll see what direction they want to go.”