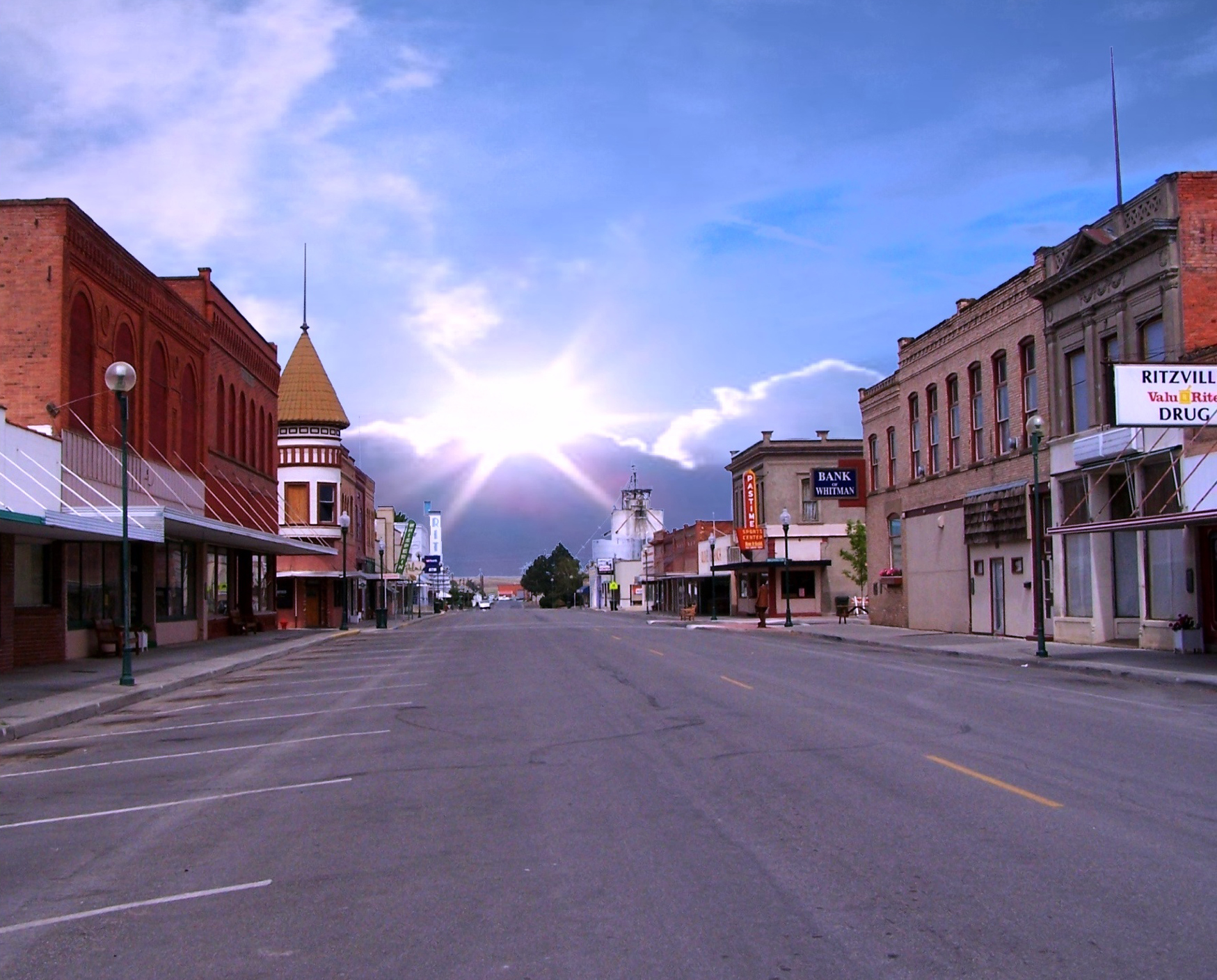 Down the road from city hall in the eastern Washington town of Lind, construction of a wastewater treatment plant is well under way. The $3.2 million project is a buoy for the town of just over 500 people — with its progress comes a nice yearly tax windfall for the home of the famous combine demolition derby.

It’s a good thing, too. Lind, built among the subtle hills in the center of wheat country, is in a precarious place when it comes to revenue. There is sales tax and, according to Lind’s mayor Jamie Schmunk, “bits and pieces of real estate excise tax.” But the once dependable property tax has been capped for the last ten years at 1 percent growth. As expenditures climb from year to year, keeping up with them, says Shmunk, can be a challenge.

When Tim Eyman ran the property tax cap as an initiative in 2001, only King and Whitman Counties voted against. The state Supreme Court overturned the initiative in 2007, arguing the voters knew not what they’d done. But the state legislature quickly put it back into place. King County, often seen as the ruler of the statewide ballot, had lost the battle.

To this day, hardly a press conference will pass by without King County Executive Dow Constantine or Seattle Mayor Ed Murray bemoaning the fact that, even as real estate prices skyrocket, the cap restricts the region’s investments. Constantine in his most recent budget speech spoke at great length of the binds it put on the county’s ability to invest in public safety. The King County Sheriff’s Office would lose its helicopter, said Constantine by way of example.

But while King County may have been alone in early opposition to the cap, it does not have a monopoly on ire toward Eyman’s initiative. In fact, as King County benefits from explosive growth (tax on new construction is not capped), it is the small towns and counties across Washington that are perhaps struggling the most.

While Lind’s wastewater plant is a welcome boon, it’s uncommon for a town of its size to host such large construction projects. Citizens of rural Washington may still favor the cap, but many of even the staunchest conservative local officials are coming out and saying: the cap is killing us.

“It’s really affecting our county,” says Lincoln County Commissioner Rob Coffman. Lincoln is among the most conservative and least populated counties in Washington. Donald Trump received 71 percent of the vote here, more than any other county. Its 2,300 square miles are almost exclusively wheat, and its voters haven’t gone for a Democrat since Harry Truman in 1948.

But despite its red-to-the-core identity and support for Eyman’s cap — the initiative received almost 60 percent of the area’s vote — Coffman, along with his fellow commissioner Scott Hutsler, say the burden it creates for Lincoln County is too great.

“We are an agriculture county, primarily farms,” says Coffman. “We have no industry. No Walmart, no Costco ... We don’t have a big sales tax.” And what they do have, he says, is "ticking down" year over year.

Their opposition goes beyond partisan politics, says Coffman, and boils down to numbers. Lincoln has about $2 million in taxable property. One percent of that is $20,000 in revenue. They make about $13,000 from taxes on new construction, says Coffman. Rounding up, that’s about $35,000 a year.

But, says Coffman, county employees have a guaranteed two percent cost of living adjustment, as written in their collective bargaining agreement. That’s $85,000 a year alone, not to mention the increased cost of insurance — an annual shortfall of at least $50,000.

“We pride ourselves on being efficient and lean,” says Coffman. But, he adds, as total expenditures creep up by three to five percent a year, they simply can’t afford to fill vacated positions. Just this last year, 13 positions were not replaced, a ten percent reduction in county staffing. “We’re way below minimum staffing levels,” he says.

Josh Weiss, director of policy and legislative relations with the Washington State Association of Counties, says, “We hear it around the state, for sure. King County has a lot more funding sources and resources generally speaking. Lincoln County is thinner. They don’t have the efficiencies of scale. Where you’ll see program pressures in King County, they’re struggling to have people even answer the phone.”

The first hit is generally public safety, as budget for this comes straight from general funds. Some towns, like Davenport, have folded their departments and contracted with the Lincoln County Sheriff's Office. Others that still have departments, like Ritzville, struggle to keep up with needs like new vehicles or bullets. Over the last five years, says Weiss, eastern Washington has lost 118 sheriff’s officers, a five percent total reduction.

In Lincoln County, they lost two sheriff’s officers that they didn’t replace. They did, however, successfully pass a small bump in sales tax to ensure they wouldn’t lose more.

The cut on police departments could have been deeper, were it not for the counties’ road funds, set aside, as one might guess, to maintain roads. Coffman says that money has been less volatile because of the fuel tax. According to Weiss, “Counties are authorized to divert money out of the road fund for law enforcement purposes and you’re seeing that happen … We’ve seen $37 million diverted from road funds in 2015.”

This at a time, says Weiss, when there are 603 deficient county bridges.

It’s no surprise Eyman sees things differently. “Wow, politicians on the east and west side of the state both oppose limits on unilaterally raising taxes,” he says sarcastically.

Eyman doesn’t express a lot of sympathy for officials, arguing that if they need more money, they just need to go to the voters and ask for a onetime lift on the cap. "It is in (politicians') nature to want as much money as possible. It is their natural desire."  He offers the metaphor of being the parent in a Toys ‘R Us, controlling the flow of toys. “It’s taking a parenting role to a bunch of politicians who are acting like kids.”

Indeed, in Seattle and King County, levies have been the way around the cap. Every November, it seems there is a new property tax proposal in the region. In August, Seattle passed a housing levy and on November 8, the region passed a proposal to expand light rail. So far, Seattle has managed to pay for police out of its general fund, although Mayor Murray has floated the idea of a public safety levy before.

But in Lincoln County, says Coffman, there’s very little that resembles bells and whistles. “We don’t provide anything other than basic services,” he says. “We don’t have golf courses or parks.” And so they’re running these measures, like the bump in sales tax, to maintain those services.

Weiss says changing the cap has been one of their legislative priorities for the last four years. The first year, he said, the effort went nowhere. But in the last couple years, “we’ve really seen a lot more acceptance of the problem it’s creating. There’s pretty strong support in the Democratic caucus and some among Republicans. We have a lot of Republicans who supported it ten years ago and can clearly see the problems it’s creating.”

He feels optimistic that the WAAC proposal of correlating the cap to inflation with a five percent limit will catch on this year.

But among his constituency, Coffman isn’t so sure.

“It’s gonna be a tough sell,” he says. “We went around to all of our eight towns and sold them this public safety sales tax increase, telling them ‘this isn’t the solution to the problem. The problem is the one percent.’ The more people you talk to, the more they understand.”

Still, he says, “I’m not sure anybody wants to have their property taxes raised. I think it’s going to be a tough sell in eastern Washington, but that doesn’t mean it’s not important.”