Murray pushes 'most important legislation' yet 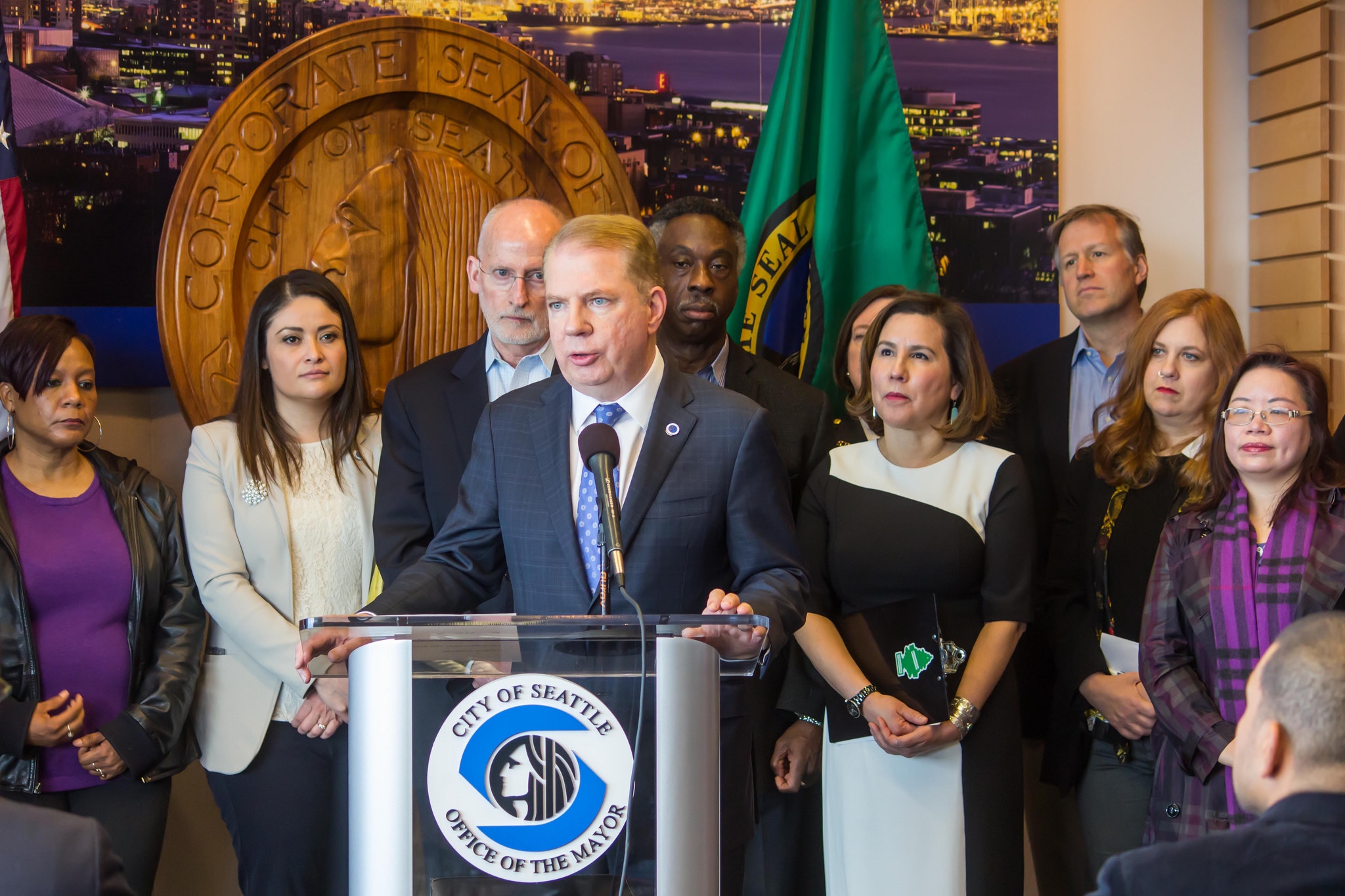 Surrounded by elected officials, staffers and community members with sometimes widely diverging views, Mayor Ed Murray today unveiled a legislative suite of police accountability proposals that he called “perhaps the most important legislation during my time in office."

The ceremony is equal parts symbolic and substantive: The meat of the proposal, in the works since 2014, has been public for months now, but Murray’s move solidifies his office’s stance on several key and contested issues.

The package also opens the door for solidifying and widening police reform. Until now, all the changes have stemmed from court oversight and administrative changes within city government. While substantive, the changes have come out of court rooms and closed-door negotiations, not full-scale public debate.

The Mayor’s Office estimates it will cost just over $6 million a year to sustain the accountability recommendations once implemented.

The drafting of the legislation has unfolded over three years, led by the civilian Community Police Commission (CPC), created as a part of the federal consent decree to reform the department. Retired Judge Anne Levinson, the former civilian auditor of the police department’s oversight arm, also played a major role in writing the proposals.

But while the mayor and involved parties had hoped to have comprehensive reform approved by the council and mayor sometime in 2015, disagreements between the CPC and the Mayor’s Office, a union rejection of one proposal and a loud scolding from the federal judge overseeing the process all helped to delay completion of the package of proposals until now.

The hope now is to have the council pass the legislation by this spring, but many of the proposals will need to be bargained with both the rank-and-file Seattle Police Officers Guild and the leadership union, the Seattle Police Management Association. The timeline on those, highly secretive, negotiations is a major unknown; the management association has been in negotiations for a new contract for literally years.

When the CPC and the Mayor’s Office released the first version of their legislative proposal last fall, the majority of the recommendations came with consensus between the parties. Most significant, perhaps, is the creation of an Office of Inspector General — an independent oversight office which will review everything from specific disciplinary investigations to broader questions of tactics and best practices. The proposals also carve out significantly more space for civilian involvement. The CPC, which was originally slated to disappear with the dissolution of the consent decree, will become permanent, serving as the representative body of the broader community.

The Office of Professional Accountability, which conducts investigations of officer conduct inside the department and is currently made up almost entirely of sworn officers, will be supervised exclusively by civilians and will include some mix of civilian and sworn investigators.

And the Disciplinary Review Board — an appeals avenue for disciplined officers stacked with their colleagues — will be eliminated.

The legislation is thick with details that, on paper, appear in the weeds, but in practice are actually quite significant. For example, the strict 180-day statute of limitations on investigations into officer misconduct will be made more flexible. Further, the OPA was restricted in investigating misconduct that was also potential criminal conduct. This legislation makes that kind of dual investigation possible.

But when the legislation came out, there were 26 points of disagreement between the CPC and the Mayor’s Office that were left unresolved. Some of these are fairly minor (for example, should searching for national best practices be an explicit role of the Inspector General?). But in some sections, the disagreements involve major questions like who appoints whom to oversight positions and how they’re funded.

The CPC and Levinson have long been strong advocates for carving out a percentage of SPD’s budget for accountability items as a way to ensure both long-term viability and, more importantly, to ensure that oversight cannot be weakened later by budget cuts. But the mayor’s office has resisted. Murray Wednesday compared the CPC ideas on budget assurances to what his Republican friends in Olympia sometimes would do to reduce state budget flexibility.

In its submittal to the city council Wednesday, the mayor’s office provided language that fit with its preferred policies on the disputed questions. Several CPC commissioners said Wednesday that they had not yet provided the council with the group's own preferences and would be spending the next couple months meeting with council members and arguing for the enactment. The mayor's office had made several changes that they had not yet had time to review, they said.

A staff member from Murray's office also suggested that authority to appoint the inspector general, which was given to the City Council search committee, to include one member of the CPC, could be bounced back to the mayor as he'd originally wanted. That will certainly be a hotly contested item in the legislative process.

Although the transmittal comes with eight council sponsors (Councilmember Kshama Sawant did not endorse), Murray is unlikely to win rubber-stamp approval. Councilmember Lorena Gonzalez, a civil rights attorney with experience suing police officers, promised the proposals would “be made better through legislation,” and that “we will not waste any time.”