Is Dave Reichert getting a bit comfy in his district? 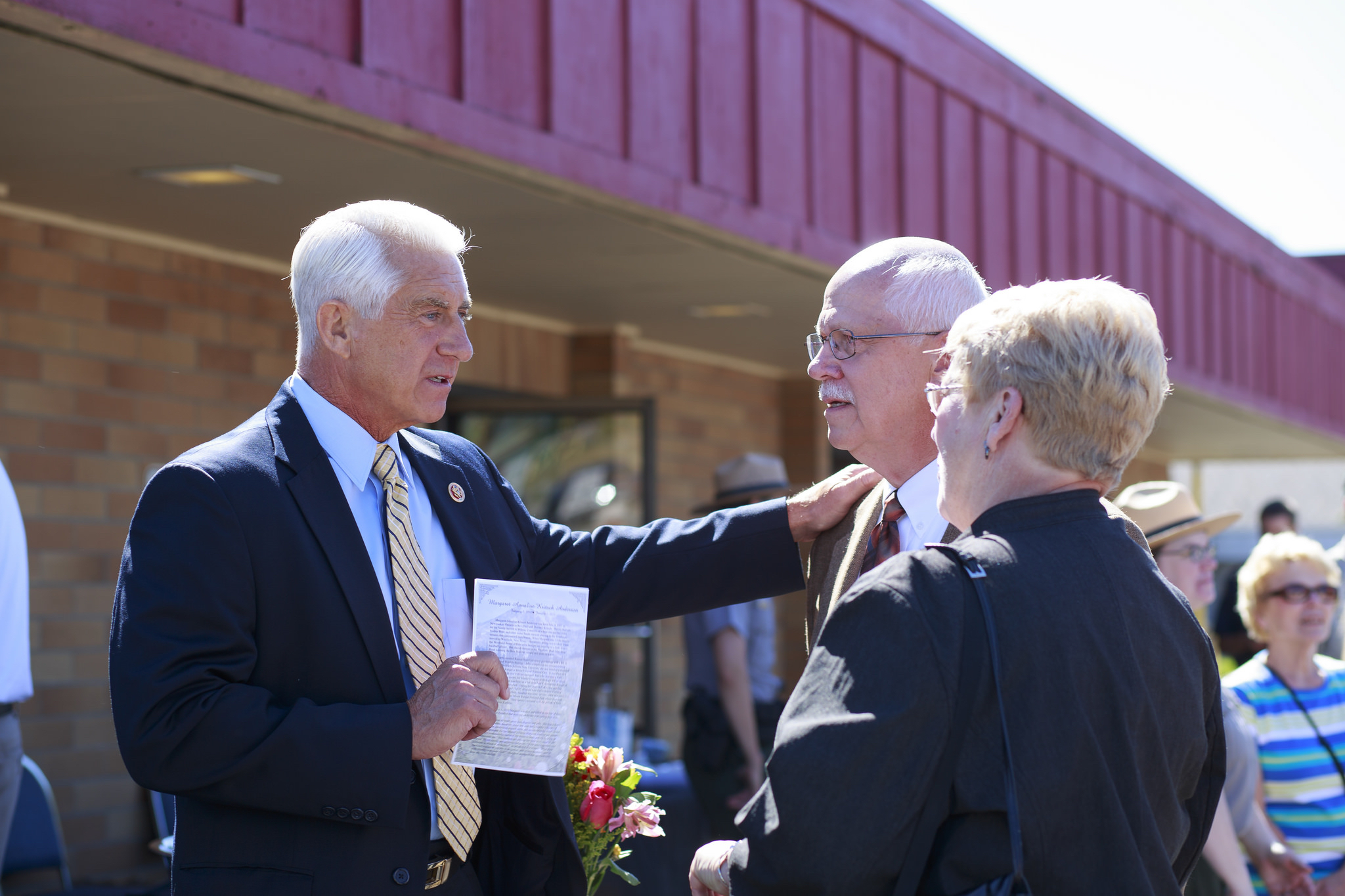 Dave Reichert talks to the parents of the late Mount Rainier National Park Park ranger Margaret Anderson, who shot and killed on Jan. 1, 2012. They were attending the 2014 dedication of a post office in Eatonville in her honor .

Dave Reichert lives in a castle, and its walls are tall.

The congressman doesn’t actually live in a castle, of course, but his 8th Congressional District now offers a very safe haven for the veteran Republican. And he is now facing questions about his openness to at least some of his constituents.

As a Republican Congress tries to set its direction with a Republican president, a portrait emerges of Reichert as a politician who weaves together a few moderate stances with staunch objection to core liberal ideas. Yet, even with boundary changes making his district more conservative, Reichert has not taken the opportunity, at least so far, to swing to the right. If anything, Reichert, generally regarded as one of the more moderate Republican elected officials in Washington, seems uneasy with the direction the Trump administration has pulled the party. But today Reichert is under pressure because, for whatever reservations he may personally hold, he has in practice avoided substantially speaking out against Trump.

The Eastside representative has refused to hold any public meetings since President Donald Trump’s inauguration, despite demands for meetings from a growing number of his constituents.

One group claims that members showed up at his Issaquah office with an appointment, during business hours, only to find the doors locked. Since then, Reichert’s staff have begun meeting privately with some constituents opposed to his stance, including members of that group.

And Reichert is scheduled to appear Thursday in a Facebook Live stream from the studios of KCTS 9, Crossut's sister organization, in a segment that will include submitted questions. But with the congressman himself still so far refusing to appear in public — or to respond to inquiries for this article — the notion that he’s in hiding resonates with some critics.

Straddling the Cascade Mountains in a broad down-and-over swipe, the 8th District is shaped like a backward “L” — its long spine running due south from Lake Chelan almost to Yakima, then turning abruptly west, stretching as far as the urban edges of Tacoma and Seattle.

But as every Washingtonian knows, while the East-West span lies flat across the map, in reality it spans a political divide nearly as craggy and steep as the Cascade peaks themselves.

That divide is one Reichert is well suited to navigating. Early on, the handsome ex-sheriff made a name for himself as the kind of politician in whom voters from both sides could see what they wanted to see: When he ran his first race for the seat, in 2004, while party-funded ads attacked his opponent with images of burning flags and charges of being soft on terrorism, Reichert himself focused on universally appealing messaging around, among other things, domestic violence prevention.

Later, while adopting some stances that put him among the farther-right members of his party, including on abortion and access to contraception, Reichert’s record is peppered with gestures to the left that many further to the right in his party would never have bothered with. Among those: supporting the repeal of the military’s ban on gays, known as Don’t-Ask-Don’t-Tell, and long-term championing of public lands projects like a 22,000-acre expansion of the Alpine Lakes Wilderness Area in the North Cascades.

The rise of Trump challenges that balancing act, though, wrenching wider the ideological chasm between the state’s East and West and leaving Reichert in the precarious position of trying to bridge the gap. It’s an uneasiness that’s almost palpable in his stance on Trump’s executive orders, shifting over the course of 10 days from a nearly neutral non-embrace to a basic rejection.

For any uneasiness he may feel, however, Reichert has in practice lived with Trump's ascendancy, voting for the ACA repeal he championed in January, and voting in committee against a move to require his tax returns.

That refusal to break from the party line is what has driven protests around his district, including outside his Issaquah office Jan. 17.

According to Chris Petzold, founder of a group called Indivisible Washington's 8th District, about 50 people from the group gathered to object to the Republican plan to repeal Obamacare. It was during the January congressional recess, and one of the members had an appointment to meet with Reichert, Petzold said, but Reichert’s staff wouldn’t let them in.

“The talking point for that visit was to try to ask him to not vote to repeal the ACA,” Petzold said. A smaller group of members had brought visual aids, and organized a few people with personal stories about Obamacare. But inside, the group found the office locked, its blinds drawn.

“We rang the bell, we knocked on the door. The door didn’t open,” Petzold said. Petzold said Reichert's staff later confirmed to a member of the group that they had been inside.

Since then, Petzold conceded, Reichert’s staffers have begun meeting with representatives of her group behind closed doors and others critical of his stances. But her group is still among several in his district demanding Reichert hold a town hall — a meeting where constituents will have a chance to hear him answer relatively unfiltered questions in a public venue. A demonstration is planned in Issaquah for Thursday, the day of the KCTS appearance, to urge Reichert to meet with constituents.

Reichert’s staff did not return repeated calls for comment for this story, but multiple outlets, including the Seattle Times on Sunday, have confirmed accounts of the representative refusing to hold town halls, for years. Friday afternoon, the top announcement on Reichert’s official website was a press release countering rumors of a late-February event in Cashmere.

Electorally speaking, the walls on the 8th district castle are tall for a reason.

While the district was considered one of the closest in the country in the years following Reichert’s election in 2004, that all changed with a 2012 redistricting. In that move, a swath of Eastern Washington was added to the district, which had previously stopped at the western foothills of the Cascades.

The transfer increased the district's proportion of Republican voters, and moved Reichert’s advantage from reasonable to huge. Although in the years before the shift he never won by more than about 5 percentage points, he has carried the elections since by more than 15. That insulating margin could help explain his response to his recently restive constituents.

“You can’t peer into someone's head,” said Mark A. Smith, a University of Washington professor of political science. “But you can say, ‘what are the incentives in the situation?’”

Smith, who teaches about and researches American politics, said that having a smaller margin of victory keeps politicians responsive to their constituents: They know losing even a few votes could cost them their seat.

“If you shift to a less competitive district,” said Smith, “the incentives are gone.”

In the case of a district like Reichert’s, Smith added, the wider margin may mean he can ignore criticism. “With a smaller margin, he’s a lot less likely to do that, because he wants to be seen as a moderate and an independent voice,” Smith said. With a margin of 15 percent or better, a Republican like Reichert, Smith added, “can essentially write all the Democrats off, and he just has to worry about keeping his base happy.” At least if he chooses that stance.

However wide the moat of his past electoral victories, though, Reichert may find that the rising tide of tension around Trump means he has to work harder at finding ways to appease — and engage with — both sides in his district. That’s especially true because the western, more liberal portion of his territory is also vastly more urban, meaning that even if Trump brings out the same percentage of previously reticent voters among Republicans and Democrats, that could turn out to be a much larger number of liberal Puget Sound area residents.

One person who knows exactly how it feels to ride out a visit from protesters is one of Reichert’s colleagues, U.S. Rep. Adam Smith, whose 9th district territory is adjacent to Reichert’s. When Obamacare was first being considered, the Democratic member of Congress said, he got visits of his own from protesters, including Tea Party supporters.

“In the last 20 years clearly our country has split more strongly, arguably than at any point since the Civil War,” Smith said. “But that doesn’t change the basic approach.”

For Reichert, Smith said, he’d offer three pieces of advice: Be accessible, be respectful, and don’t treat your constituents like enemies.

“Your response time may be a bit slower if you’re overwhelmed, but you respond,” Smith said. “I think it’s a mistake to try to hide.”

For her part, Petzold was skeptical last week of Reichert’s upcoming Facebook event.

“It’s not interactive,” Petzold said. “If our questions are going through a filter, this is absolutely not a town hall.”

In more ways than one, Reichert's position may be emblematic of American democracy — a system caught in a crisis of accessibility and accountability. Constituents, after long being happy to ignore the system, are suddenly finding it has become too opaque, and too removed for their tastes.

The UW's Smith offers another insight: When politicians aren’t worried about keeping diverse factions happy back home, it can also make them less effective in their work in Congress. That's because they’re less motivated to figure out ways to compromise with colleagues across the aisle.

“Right now, you see people tending to dig their heals in, and say, 'It’s my way or the highway,'” Smith said. “The people who are in those diverse districts can be deal-cutters in Congress.”