Dreamer stuck in detention, but case stays in federal court 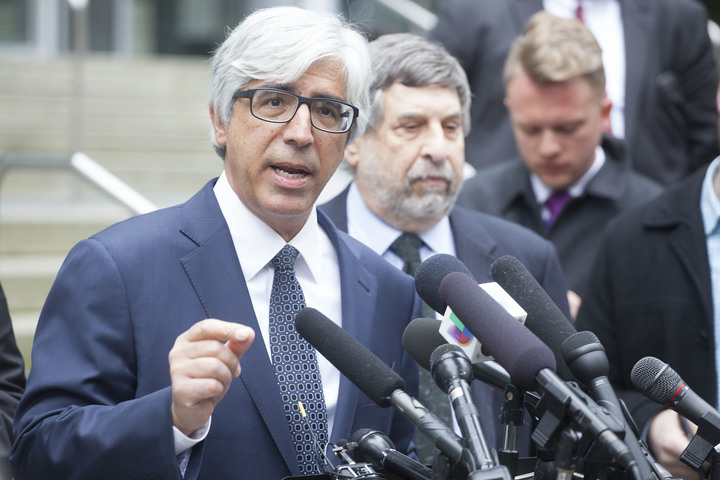 Attorneys Theodore Boutros, left, and Jonathan Rosenbaum talk to the press after a recent hearing on the case of their client, Daniel Ramirez Medina.

The 24-year-old undocumented Mexican man who was arrested last month despite a belief the government had permitted him to move out of the shadows will remain locked up, U.S. Magistrate Judge James Donohue said Tuesday.

Daniel Ramirez Medina was among the 800,000 beneficiaries of the 2012 Executive Order by President Obama called Deferred Action for Childhood Arrivals or DACA. It granted clemency to undocumented immigrants who have been in the United States since early childhood.

His arrest is the first time a DREAMer, as DACA recipients are called, has been detained for being undocumented. Ramirez Medina’s lawyers, Mark Rosenbaum and Theodore Boutrous, said they plan to file an objection to the judge's ruling.

The lawyers, in a conference call following Donohue's decision,  said they were "deeply disappointed" Ramirez Medina would remain detained at the Northwest Detention Center in Tacoma. But, they were also celebrating the judge's decision to keep the case in federal court, denying the government’s request to punt the case into immigration court. That means both sides will have to argue the case as a constitutional issue, not purely as an immigration issue, which could set a clear precedent for how all DACA recipients should be treated by federal and local law enforcement.

The lawyers had argued the promise of DACA allowing young undocumented immigrants to come out of the shadows was now being betrayed. They conceded his current status in the United States could be brought before an immigration judge but they argued DACA offered protections against wrongful arrest that were violated.

The government meanwhile argued U.S. federal court was the wrong jurisdiction for this case. Instead, the case ought to be heard in immigration court, which is where deportation cases are heard, the government’s lawyer Jeffrey Robbins said.

Ramirez Medina's case has received national attention, including a recent op-ed from Ramirez Medina himself this week in the Washington Post. Now the court case has turned into a potentially precedent-setting legal battle to define what, exactly, DACA status means for 800,000 young people across the country: Is it, in fact, a protection or is the status easily cast aside upon arrest?

Tuesday’s court ruling means the constitutionality of Ramirez Medina’s case will now be fully heard in federal court. Both sides have until March 28 to file objections. As of now, full consideration will begin on March 31.