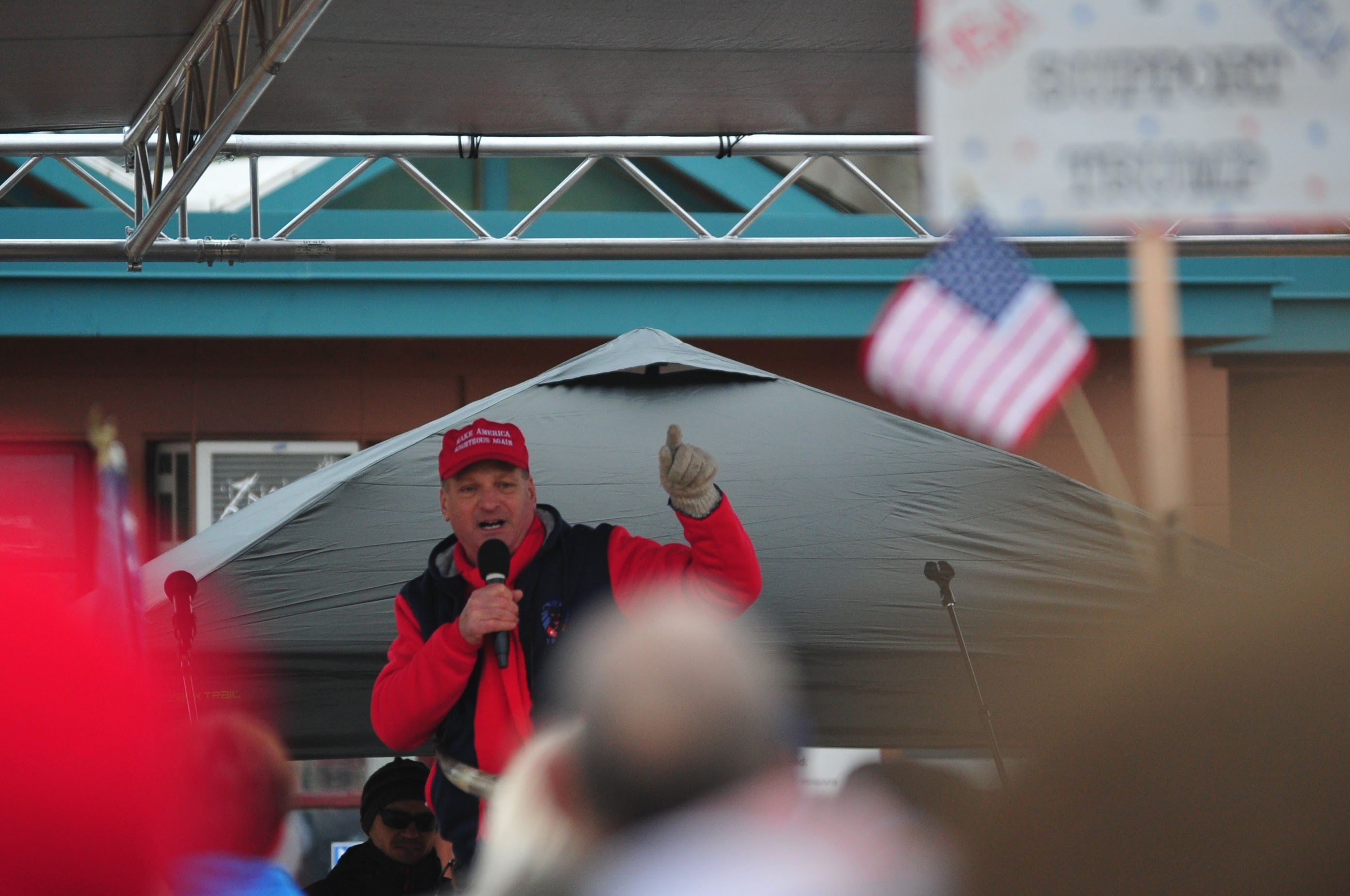 A small rally in support of President Donald Trump in Olympia remained mostly peaceful Saturday afternoon, despite the presence of openly armed rally-goers and more than a hundred counter-protesters.

The rally topped out at around 225 people, accompanied by 150 counter-protesters, said Sgt. James Prouty of the Washington State Patrol. Four people were arrested near the start of the rally and charged with assaulting police officers, although Prouty couldn’t provide further details, including whether the arrests were counter-protesters or Trump supporters. Calm returned as the rally carried on, however, and remained until rain drove both sides away in the early afternoon.

During the rally, which came as part of a series individually organized events around the country loosely coordinated as March for Trump, speakers exhorted the crowd not only to support the president, but to participate in the news media, and build a Republican movement in Washington. Police stood by, separating the supporters from counter-protesters.

Bostrom, who organized a similar event in Bellingham earlier in the week, said he saw post-election rallies around the country as a way to celebrate Trump’s successes.

“I don’t think there’s anything with more energy than a Trump campaign,” Bostrom said. “It’s right up there with the Seahawks in a good year.”

Olympia resident Wesley Belknap was skeptical of the reasoning for holding the rally in his city, which is known as a bastion of liberal politics. Belknap said he had spent most of the event talking with Trump supporters, and that most of them seemed to come from more other parts of the state, often small towns.

“Imagine if a bunch of people from Olympia [went] to Shelton or Lynden and held a rally for Bernie Sanders or something,” Belknap said, referring to two smaller Washington towns, both known as relatively politically conservative.

“From the get-go it almost seemed like they just wanted a counter-protest, or some kind of conflict,” Belknap said, calling the choice of venue “ridiculous.”

Belknap said that in general the Trump supporters he had met seemed open to dialogue.

“Almost all the people I talked to came off as pretty reasonable,” Belknap said. But, he added, most of the conversations seemed to taper off when he mentioned the finer points of Trump’s policies.

Organizer Peggy Hutt of Gig Harbor said that a larger rally had been planned for a different location, but that difficulties in the organizing process had caused the organizers to change plans just two days before the event. Hutt declined to elaborate.

The rallies followed an announcement that Trump would begin campaigning for 2020 re-election now and there would be a resumption of campaign-style rallies.

Not everyone at the rally fit what has become the stereotype of Trump supporters —Republican and usually white.

Wes and Jeannine Discher of Grayland drove an hour-and-a-half to attend the rally, and said it wasn’t the first time they’d been active in politics. Before Trump, Wes Discher said that his libertarian leanings had previously made him a strong supporter of Democratic presidential candidate John Kerry, for whom he had also attended rallies.

“I was a Democrat,” Discher said. But Obama, who he originally supported moderately, had pushed the party too far left, he said.

“They just kind of steamrolled ahead,” Discher said, adding that he saw moral arguments creeping into the rhetoric of Democrats during Obama’s term. Those morals didn’t reflect his own, Discher said, and he drifted from the party.

Glenn Fowler said his views, which he described as nationalist and constitutionalist, motivated him to make the drive from Belfair with his wife for the rally.

Fowler, who is African American, also said he wasn’t phased by reports that Trump had discriminated against black people as a landlord long before his presidential run.

In the end, the abrupt onset of driving rain cleared rally-goers and protesters alike from Heritage Park in Olympia shortly after the last of the event’s speakers wrapped up.