Seattle's car megatunnel is here. Can the city still lead on climate? 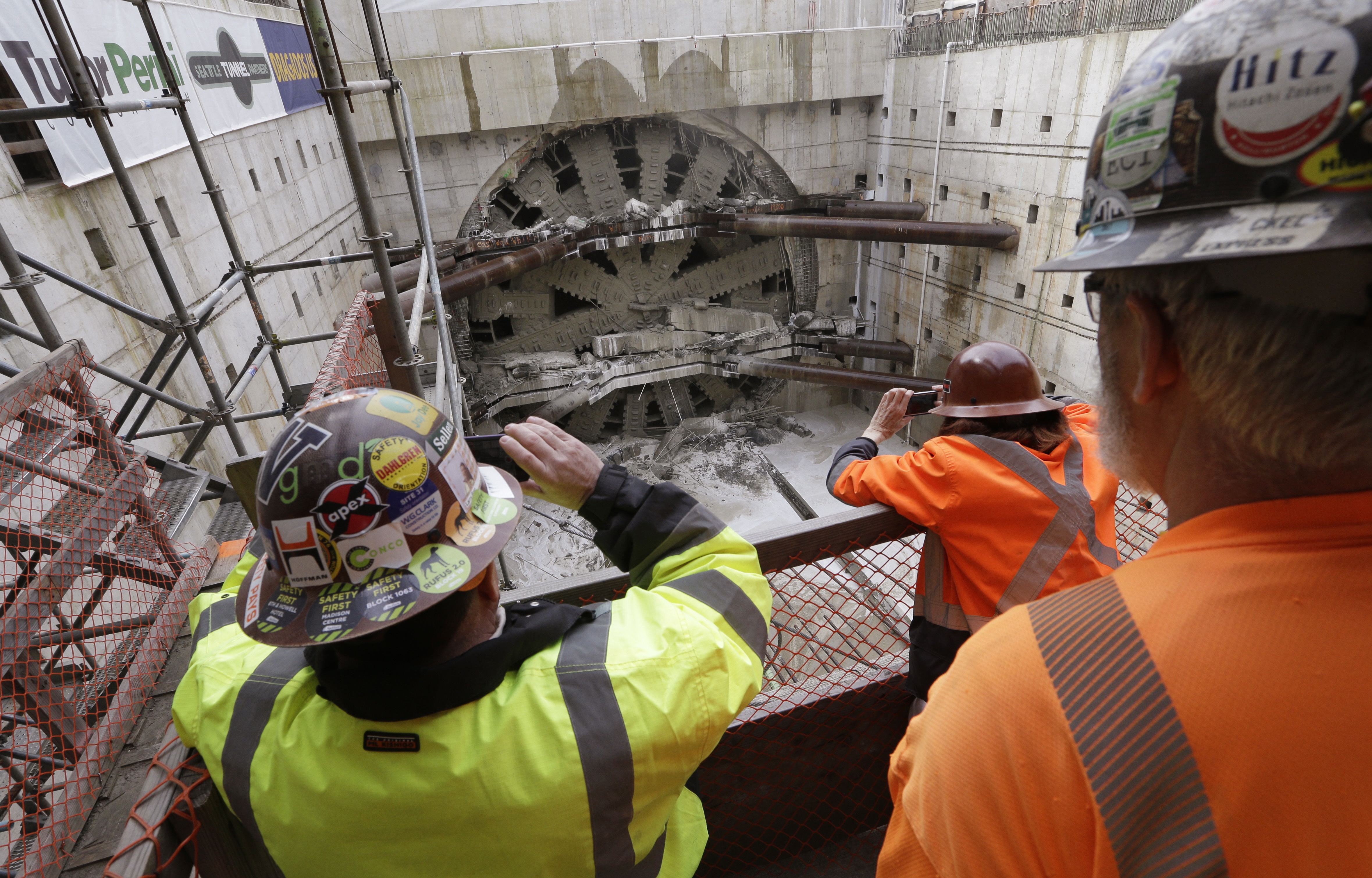 Workers watch — and photograph — the breakthrough of the Bertha tunnel-boring machine.

With Bertha completing its long-delayed, expensive trip under Seattle, much of the focus understandably goes to cost and traffic concerns. What often doesn’t make the list of issues is climate change, which says a lot about the state of politics in Washington state.

In 2006, I joined a local movement that thought we could do here in Seattle what has now been successfully done in San Francisco, New York, Seoul, and other cities — replace an aging, obsolete highway with climate-friendly transit and other options.

We thought progressive Seattle was ready. Mayor Greg Nickels had launched the Mayor’s Climate Protection Initiative, committing Seattle to meet the goals of the Kyoto protocol, a climate change treaty rejected by President George W. Bush and Congress. Ultimately, more than 1,000 cities nationwide signed on to the idea.

Al Gore came here to celebrate our new Climate Action Plan, and unveil his documentary “An Inconvenient Truth.” He was joined onstage by Gov. Christine Gregoire, who gave a rousing talk about climate change. Climate activists, including me, felt that the political tide was turning in the fight against global warming, and Seattle was leading.

After Seattle had voted against both the tunnel and the elevated highway in a controversial 2006 ballot measure, a stakeholder group was convened. The heads of the state, county and city transportation departments agreed on a plan for improved transit, changes to I-5 and a waterfront boulevard. The proposal could handle the traffic, boost transit and deliver a great, walkable waterfront.

Backed into a corner, the Chamber of Commerce, Port of Seattle and downtown business interests went to work. In a remarkable one month period of heavy lobbying, they convinced Gregoire to support the tunnel. Nickels had always been for it. King County Executive Ron Sims signed on, too, in exchange for a promise (subsequently reneged on) for more taxing authority for transit. In January 2009 they bucked the recommendation from the transportation heads and announced their final decision — a tunnel.

To make the deal work, all parties agreed that the state would not have to pay more than $2.4 billion. To meet the $3.1 billion cost, the Port of Seattle voted to pay $300 million, and the remaining $400 million was plugged with a proposed toll. But even that wasn’t good enough to overcome skepticism from the Legislature. So, then-Senate Transportation Chair Ed Murray included a provision that Seattle would pay all cost overruns. It was the only way to get the Legislature to approve the tunnel.

I was already contemplating a run for mayor because I was disappointed by the distance between rhetoric and action on climate change. This was a truly global emergency. If any city should lead, it was — and is — Seattle, as city residents believe our natural environment is a priority.

Transportation makes up over 50 percent of our regional emissions, and more than 30 percent nationwide. Stabilizing the climate means pushing carbon emissions to zero. Success therefore requires revising our transportation system. It certainly does not mean investing billions in the tunnel to make it worse.

The tunnel was far from the only issue in the race for mayor in 2009 but it was an important one. But once elected mayor, I was, except for newly-elected council member Mike O’Brien, pretty much alone among politicians in raising concerns. Just prior to the 2009 election the Seattle City Council had voted 9-0 to support the tunnel. I had to accept the tunnel as city policy, and staked my opposition on the cost-overrun provision. The council blew through that too. In early 2011 the city council rejected my position that we should not proceed until the Legislature agreed to take responsibility for all costs.

They apparently agreed with Gov. Gregoire's view: “There’s no reason to expect cost overruns.” I supported an effort to get the council’s decision voted on by the public, but the debate was too complicated, and the hour too late, for that ballot measure to succeed.

The political leaders had gotten their way, and delivered the buried highway that big business interests so desperately wanted.

Now that the tunnel is (almost) done, I am mostly thankful that Bertha did not get permanently stuck. The project is three years behind schedule. WSDOT says it needs at least $233 million more, the contractor has $480 million in claims, and toll-revenue projections are down some $200 million. With a lot more work still to be done, we still don’t know the final shortfall will be.

And, caution: More political maneuvering is ahead on the question of who will pay the added costs. To cover overruns, the state has already sliced at least $70 million from dollars promised to Seattle.

I next think, What if in 2001, right after the Nisqually earthquake, we had decided to build transit? Instead of a ribbon cutting in 2019 for a new highway tunnel, the politicians could have celebrated new rail lines to Ballard and West Seattle then. The recently approved Sound Transit 3 program will eventually open those lines — in 2038, after an extra 20 years of terrible traffic.

The tunnel, with no downtown exits and fewer lanes, won’t help traffic. More people will get off Highway 99 north and south of town to get downtown. One of those exits is by troubled Mercer Street. The worst local traffic is always next to highway entrances and exits. The tunnel’s tolls will send more drivers to I-5, one of the Northwest’s worst traffic chokepoints.

Still, the tunnel’s contribution to global warming overshadows any cost and traffic concerns, in my eyes. The carbon emissions in construction are immense. The tunnel promotes driving — the single largest source of local emissions.

Which brings me to the biggest lesson of the tunnel project: Most progressive Democrats and interest groups won’t stand up and fight when the power brokers demand something that makes global warming worse.

It’s not ancient history, either. Democrats helped deliver the 2015 state transportation bill with billions for new highways. The Port of Seattle’s Democratic commissioners green-lighted a Shell Arctic drilling rig in Elliott Bay. Even Mayor Ed Murray signed off, until the issue got too hot.

When the issue is far away the politicians are brave, but when the big local economic interests come calling, the Democratic Party delivers.

There’s some truth to tunnel backers’ argument that when the dust settles, we’ll like the tunnel and forget that this was once “the king of highway boondoggles.” What is done is done, and the city has no choice but to make the best of it.

But I hope that we can also take stock. Highway building doesn’t solve congestion, indeed, it helps create it. And megaprojects are almost destined to go over budget. In the words of former San Francisco Mayor Willie Brown, “If people knew the real cost from the start, nothing would ever be approved. The idea is to get going. Start digging a hole and make it so big, there's no alternative to coming up with the money to fill it in.”

What gives me hope is that while the politicians seem stymied, the people keep pushing. Cities around the globe continue to make huge gains on biking. The highway removal movement continues — Buffalo, Rochester, even Dallas are looking to remove highways. Activists have made the fossil fuel divestment movement the fastest-growing such movement in history. The dream of clean tech is becoming a reality. That’s something the politicians can only ignore for so long.

I also hope that, after we close the coal plants and stop the pipelines, we’ll figure out how to solve emissions from transportation. That we’ll build walkable places connected by electrified transit, make the city safe for short trips by walking or bicycle, and allow housing near jobs. Responding to climate change requires no less.

That’s my biggest hope — that just like we have been a leader on clean energy and divestment, Seattle and Washington state will ultimately be leaders on clean transportation. In building the tunnel, we’ve fallen behind the curve, but if we’re willing to take an honest look at the past, we can lead in the future.