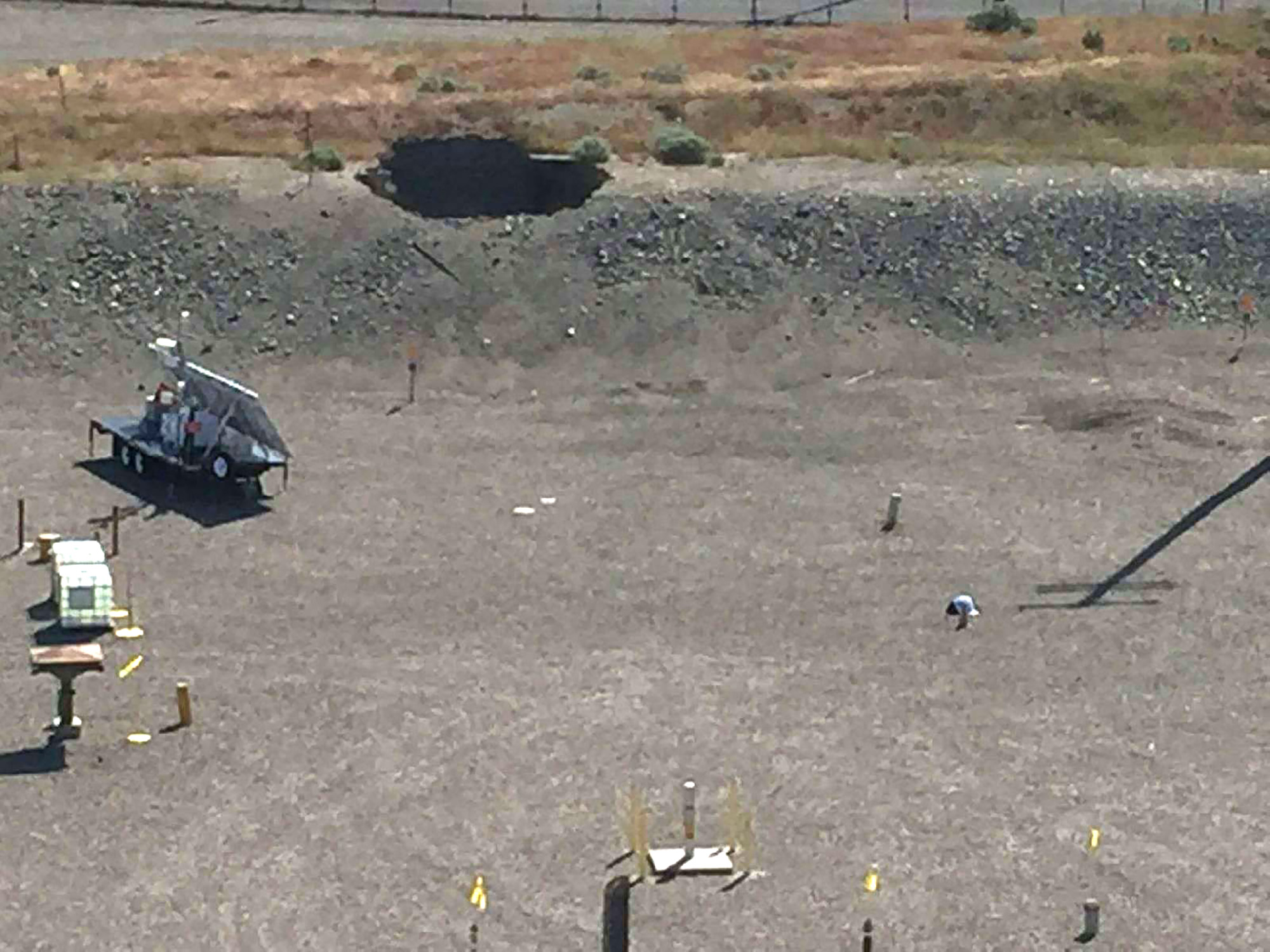 A 20-foot by 20-foot hole in the roof of a storage tunnel at the Hanford Nuclear Reservation near Richland, Wash., Tuesday, May 9, 2017. An emergency was declared Tuesday after the partial collapse of the tunnel that contains rail cars full of radioactive waste.

This story was originally published by Oregon Public Broadcasting.

The U.S. Department of Energy issued an emergency alert Tuesday morning at the Hanford Site north of Richland, Washington, after a tunnel containing rail cars full of radioactive material was breached.

Some workers at a former chemical processing plant have been evacuated and about 3,000 others near the area at the center of the Hanford Site were directed to take shelter indoors.

State and federal officials said all workers were accounted for, there were no injuries and no indication of “release” of radioactivity into the environment. By early afternoon, the employees taking shelter were released to go home except those needed for emergency response.

In a Facebook Live session, Hanford spokesman Destry Henderson explained that the emergency was triggered Tuesday morning when workers noticed the roof over a tunnel used to store contaminated equipment had sunk.

U.S. Sen. Ron Wyden, D-Ore., said in a statement that the cave-in is a reminder “that the temporary solutions DOE has used for decades to contain radioactive waste at Hanford have limited lifespans, whether they are underground tunnels for storing contaminated equipment or aging steel tanks filled with high-level radioactive waste.”

Washington Gov. Jay Inslee, in Washougal to tour a restoration and flood-control project, said he’s been advised of the emergency and confirmed that there are no reports of injuries at Hanford.

“I know there are many questions of how this happened — and we’ll have to get to the bottom of that,” he said Tuesday. “At the moment we’re focusing on the safety of workers and making sure there’s no release beyond (the) immediate site.”

Officials at Hanford were concerned about contamination in soil covering railroad tunnels near the Plutonium Uranium Extraction Plant cleanup site. The tunnels contain contaminated materials. The alert was triggered by the discovery of a small sunken area of soil that covers a tunnel.

According to a press release from the governor’s office, the Department of Energy alerted the state Tuesday morning to inform them that “a tunnel was breached that was used to bury radioactive waste from the production of plutonium at the Hanford Nuclear Reservation.”

The area is not open to the general public.

The plant, also known by its acronym PUREX, was used during the Cold War to chemically extract plutonium from irradiated fuel rods for use in nuclear weapons.

In 2015, a preliminary report identified the tunnels and the PUREX facility as a major risk area on the Hanford site. The report concluded if the tunnels collapsed, from an earthquake or another natural cause, it could pose a risk to workers because of the highly contaminated railcars stored inside.

Between 1960 and 1965, eight rail cars were pushed inside one tunnel, full of radioactive waste. Another tunnel was constructed in 1964 to hold 40 additional railcars. Currently it has 28 railcars full of radioactively contaminated equipment. In the early hours of the emergency, it was unclear which tunnel caved in.

“There’s lots of legacy out there, and there are a few places where is substantial ongoing risks, and (the tunnels were) one of them,” Charles Powers, co-author of the risk report, said.

A spokesman for the Washington Emergency Management Division said the state Emergency Operations Center has been activated and is monitoring the situation. The Oregon Department of Energy, which is responsible for radiological safety, activated its emergency operations center as well.

Hanford sits next to the Columbia River. It was one of the original Manhattan Project sites. Its nine nuclear reactors irradiated uranium fuel rods. That created plutonium, which was extracted with chemicals, processed and shipped to weapons factories. Each step produced radioactive waste. Hanford is the nation’s largest nuclear cleanup site, with 56 million gallons of radioactive waste sitting in old, leaky underground tanks.

Here’s an explainer on the nuclear waste cleanup at Hanford.

OPB’s Molly Solomon in Vancouver contributed to this story.