Pramila Jayapal grapples with the strange realities of D.C. 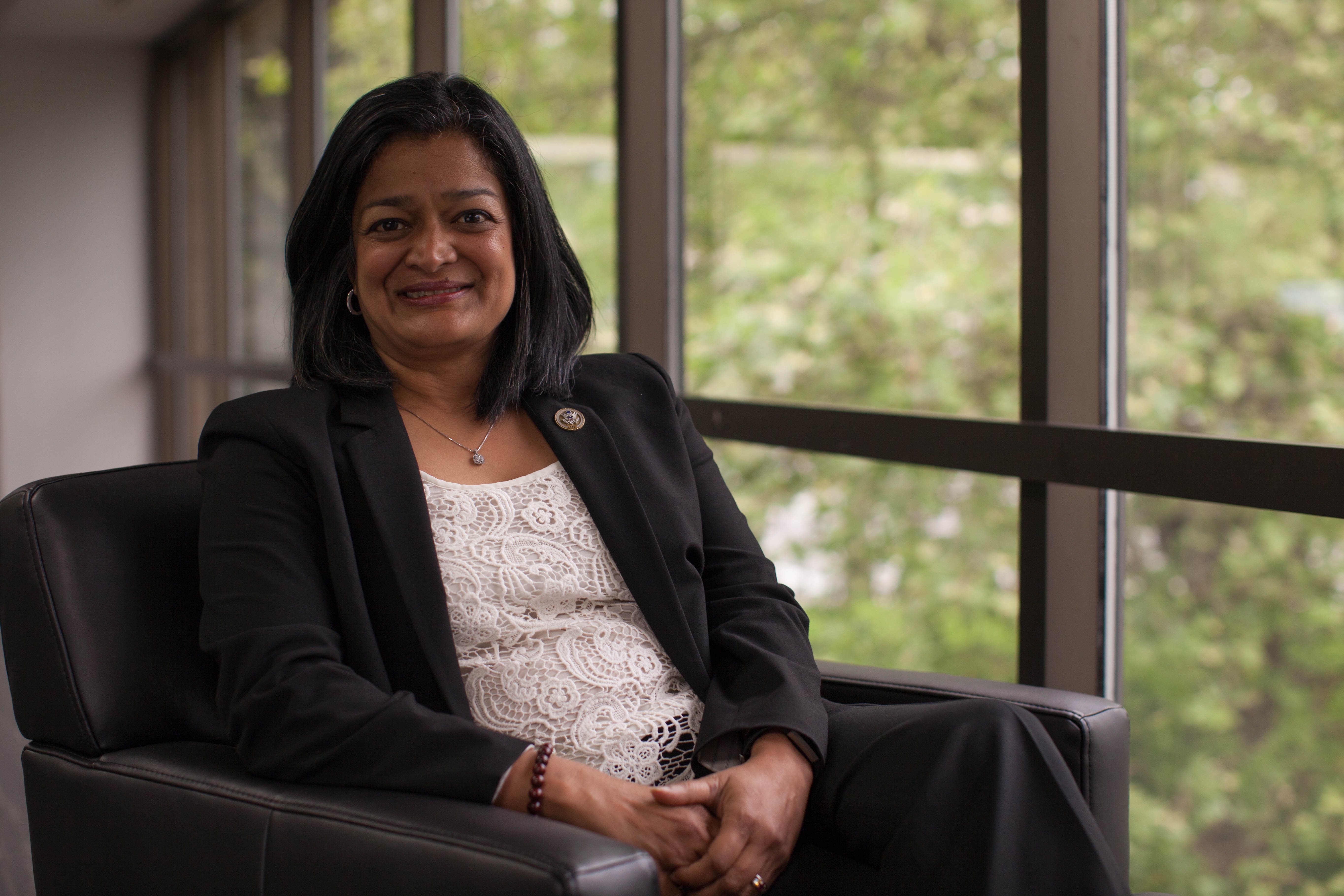 Pramila Jayapal at the offices of Crosscut and KCTS 9

In a Crosscut Facebook Live interview Tuesday afternoon, Jayapal told KCTS/Crosscut Senior Correspondent Enrique Cerna that hard evidence on the Trump administration’s controversial contacts with Russian officials and banks needs to be nailed down before Congress can take a position beyond investigating these matters.

Besides, she said, a move to impeach the President would be a fruitless political gesture unless Republicans join in. And Congressional Republicans have generally not been part of the rumblings about possible impeachment.

The interview covered Jayapal's thoughts about Trump, his proposed budget and his administration’s woes, and working with a Republican majority that has not been friendly to immigrants. Born in India, Jayapal, 51, immigrated to the United States when she was 16. She is the first member of Congress who is Indian American.

Jayapal was an early and outspoken critic of Trump's travel ban, aimed at primarily Muslim nations. She is also a vehement critic of the President's budget proposal, which would severely cut social and domestic programs. But for now, she said, we'll have to live with him.

Here are some of Cerna’s questions and her answers, edited for brevity and clarity. The full video is at the end of the story.

Where do you stand on impeachment?

You can’t move anything forward unless you have the votes for impeachment. You can draft articles. You can introduce them. The pressure is appropriate in that people should be outraged by what is going on. We need that pressure to continue, but at this moment [few, if any, Republicans would be willing] to vote for impeachment without more details.

Do we have all the evidence we need to make a very clear-cut case? If we don’t, it could really backfire, I think, on Democrats across the country. It could be seen as just a partisan play — when in fact it is something much bigger than that. This is about how do we preserve the sanctity of our democracy.

Do you have concerns about the administration’s Russia-related controversies?

It’s a huge concern. It's gotten so we don’t have the adjectives that describe every stunning revelation that comes out in the news. And I know I feel I have whiplash going from one scandal to another.

We don’t know all the facts. … I haven't seen the memos about the firing of [former FBI Director] James Comey, the memos by James Comey about Trump asking for his loyalty and the documents of Trump calling the two [intelligence agency] directors and asking them to lay off the investigation of [former National Security Advisor] Michael Flynn. We haven’t gotten all the memos on Jared Kushner asking for a back channel set up with Russia. But there is way too much smoke from reputable sources.

It would be in [the administration’s] best interest to get as much information as possible to put [the handling of Comey and the FBI's investigation of Flynn] at rest, so that people don’t think the administration is doing things they shouldn’t be. This has not been happening, and that adds to our suspicions that there is something very wrong here.

How has it been to work with Republicans on immigration?

We just finished three days of immigration hearings. When I listen to what people say about immigration, it makes me very sad. [But] I think it’s been really instructive for me to sit in on a committee with people who I had only known by their names before, and to really understand what is happening in their heads. We are working on something I believe will bear fruit with another Republican around immigration. I don’t know if it will actually lead to a bill. It’s the beginning of a conversation. [Jayapal declined to elaborate on any details of this potential bill.]

Your thoughts on the Trump budget proposal?

I’m the vice ranking (Democrat) on the budget committee, and listening to the redefinition of compassion was extremely challenging. … It’s not just Democrats taking him on, [Rep.] Mark Sanford [R-South Carolina] did a masterful job of taking him on, on the ridiculous growth assumptions. Another Republican, [Rep. Tom Cole, R-Oklahoma], took him on over cuts to the [National Institutes of Health] and [Centers for Disease Control] and said that in a time of Ebola and the Zika virus that it would be dangerous for Americans to cut these type of critical funds.

The vision being put out is so harsh, so stark and so demeaning for people who need assistance across the country to get their lives back on track — many of whom voted for Trump.

Is the new Resistbot app [which allows a person to text a message and have it show up in a congressional member’s office as a fax] a good way for the public to provide feedback?

Our mailroom tells our office we get the most mail of any congressional district in the country. I think it's something like 80,000 phone calls, emails and letters that we have received. The most effective thing is when we get a personal message or person’s story. It doesn’t mean you can’t use Resistbot with a standard message. But if you take that standard message and add something that is personal to you and why it important to you, it really makes a big difference. If we see it as part of a campaign, it probably doesn’t have as much impact.