How feeding the homeless created a community -- and divided another 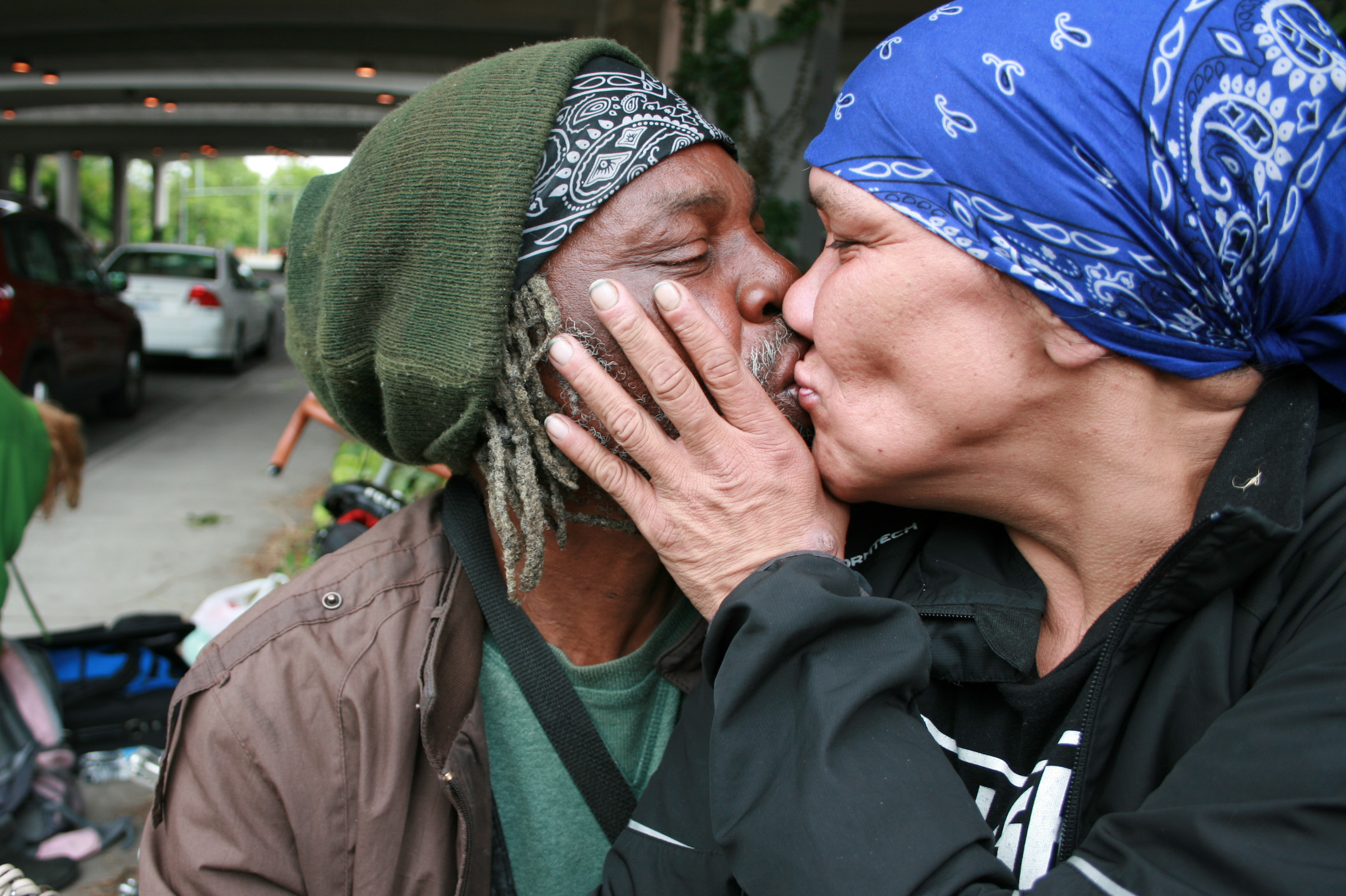 The “Captain” and his fiancée, Michelle Nala are regulars at the supper. The couple lives nearby without a tent and without complaint. “Actually we could use a tent,” Nala says. (Photos by Jenny Cunningham for Crosscut)

In a bay-windowed bungalow in South Seattle, Dawnmarie Cooper puts the finishing touches on a fruit-studded bread pudding. Cooper is making her grandmother’s recipe for a group of new friends. She carefully packs two big pans of bread pudding in foil to take them outside — because that is where her new friends live.

At the same time that Cooper wraps up enough dessert to feed 100, Jay Jarvis, sweaty from walking a long way on a hot summer day, ducks into a public restroom in a city park. “I’ve gotta go in here and get cleaned up,” he tells a companion. “I’ll see you over at the supper.”

All over the neighborhood, at the intersection of North Beacon Hill and Jackson Place, guests are putting on their cleanest T-shirts. Meanwhile, hosts load Tupperware into trunks and head for “the Cloverleaf,” a giant Celtic knot of concrete and asphalt where Rainier Avenue South ducks under Interstate 90.

By 3 p.m., the underpass is adorned with welcoming tables dressed up in red and white checked tablecloths and a buffet line loaded with homemade meatloaf, fresh green salads and, of course, Cooper's bread pudding.

“Who is running the coffee and ice cream?” Cooper barks, and volunteers jog up double time. Cooper smiles and admits, “I am the drill sergeant here when it comes to food.”

As “Come on baby and rescue me” bops from the boom box, people living outside appear from the shrubbery under I-90 with bikes and kids and Pitbull puppies and fresh wounds and broad smiles. Another Sunday supper has begun.

Is this Jesus for a burger?

The Sunday supper had its genesis on a frigid day last winter. Acupuncturist Lucas Hedrick was on his way to a friend’s house for lunch when he drove past a packed homeless encampment. He’d passed the illegal tent camp many times, but on this day, he couldn’t shake the image of the cold men and women he’d glimpsed from the driver’s seat of his heated car.

Hedrick left the party early, ordered 50 hamburgers at McDonald’s and hand-delivered them tent to tent. When he wrote about his experience on the neighborhood social network Nextdoor, he tapped into the zeitgeist of neighbors who were also hungry for a way to do something about the misery they saw around them. Computer engineers, professors, administrators and others signed up to make food and serve it to all comers.

Only about 25 diners showed up to the first dinner in February. “At first there was some resistance, suspicion, from people living on the street,” Hedrick recalls. “They wanted to know, is this ‘Jesus for a burger?’ And we said, ‘It’s just a meal. Come eat.’”

These days, the group of volunteers that produces the supper has a name — the Rainier Popup Kitchen — and around 150 diners show up each Sunday, among them many regulars. “Oh, I’m so happy you made it,” Erin Bogarte chimes while giving Jay Jarvis a hug. When Bogarte first met Jarvis, a man in his 40s with an impish smile, he was living on the street near the supper spot. With the help of citizen volunteers like Bogarte, Jarvis is moving up in life — but it’s still quite a fall from owning a home in a comfortable Eastside suburb.

“I lived in Issaquah for 18 years. I was married. I got separated. Drugs. Drugs were the problem,” Jarvis explains. “I live in a shelter now near Seattle Center and I take the bus across town so I can see my friends at the supper.”

Love and money landed Robby Reynolds on the street. A young man with a thin, pale face and silver circles under his eyes, Reynolds works for the railroad two days a week. “I send $1,800 a month to my ex-wife and my little boy. That’s all my money,” he says. “I love my son. I still love her. That’s why I have to live right there” — he points to a tent barely visible in the trees on a steep slope below the freeway.

Reynolds says he hates living on the streets, but the man known as the Captain appears content living outside. The Captain and his fiancée, Michelle Nala, live in what they call “a cut” — a term used to describe any out-of-the-way doorway that can give them some kind of shelter.

“We are not homeless,” the Captain says. “You are only homeless when you leave this world. The ground is our bed. The sky is our ceiling. We are fine.”

“Actually, we could use a tent,” Nala says.

Legacy of the sweeps

Nala and the Captain lost their tent in mid-May, when police officers and city sanitation workers began busting up a nearly mile-long homeless encampment under I-90 and cleaning up the fire pits, garbage, feces, used needles, sodden toys and furniture that stretched from Rainier Avenue South to Interstate 5. This was one of Mayor Ed Murray’s sweeps, designed to get people off the streets and into emergency and then permanent shelter.

Some homeowners in these diverse but gentrifying South Seattle neighborhoods feel the sweeps would have gotten rid of the homeless problem — if the Sunday supper hadn’t stuck around.

“So I already know I'll sound like a monster, but I'm also not a huge fan of this pop-up kitchen,” a man from Columbia City wrote on Nextdoor. “People respond predictably to incentives, and this Sunday dinner incentivizes homeless people to migrate back to the south end of Seattle.”

A father who said two homeless men chased his teenaged daughter predicted street people would bite the hand that feeds: “The homeless bring heroin and rape to our communities. Feeding them will just make them linger over here.”

A woman from Mount Baker accused the Sunday supper of undermining the efforts of the city to convince homeless people to accept services: “To interfere with the actual work of getting them off the streets is not right, even though the intention is good.”

But the City of Seattle’s director of homelessness, George Scarola, says the city didn’t expect the sweeps to get all homeless people out of the area. “After the sweeps, much to their credit, the popup kitchen group saw that there is still a need in the neighborhood.” Scarola adds that it’s unrealistic to think that homeless people have stayed in this area to have one meal a week.

So, as the online battle rages, the Rainier Popup Kitchen is branching out a bit. Now it also offers bags of dog food, T-shirts and toiletries. Bandages and gauze are popular. The group, now unflustered by the realities of the street, is even looking into providing the anti-opioid overdose drug Narcan.

As the supper has evolved, neighbors — with homes and without — have become friends. Lucas Hedrick, who started the supper club with a car full of McDonald’s hamburgers, says some of the bond grows out of recognition that the line separating the two groups is a thin one.

A single dad, Hedrick is in school for his doctorate. When his landlord raised his rent by $1,000 a month, he was priced out. “I could have become homeless,” he says.

He was lucky. Vicki Butler, a program director at City University and one of the original supper volunteers, offered Butler and his daughter a room at her house. “I found a place, but I told her ‘you are my backup,’” Butler says. “Vicki, she’s my family now.”

Still, the future of the Rainier Popup Kitchen is uncertain. Unlike most outreach efforts, the group doesn’t have the support of a church, nonprofit or government agency. And while it has the city’s blessing to continue serving meals on the wide public sidewalk under I-90, Mayor Murray isn’t running for reelection.

Come November, the city’s priorities could change — especially since so many folks who live in surrounding neighborhoods want next Sunday’s supper to be the last supper. 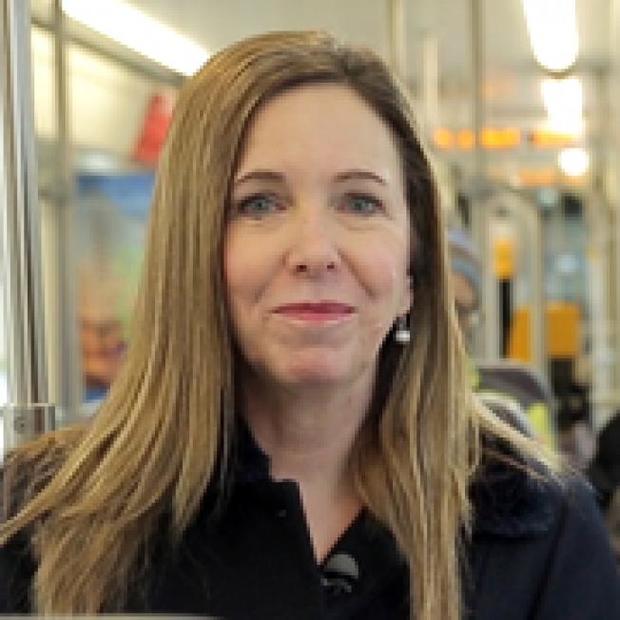