Raising a glass to a beloved Ballard dive bar 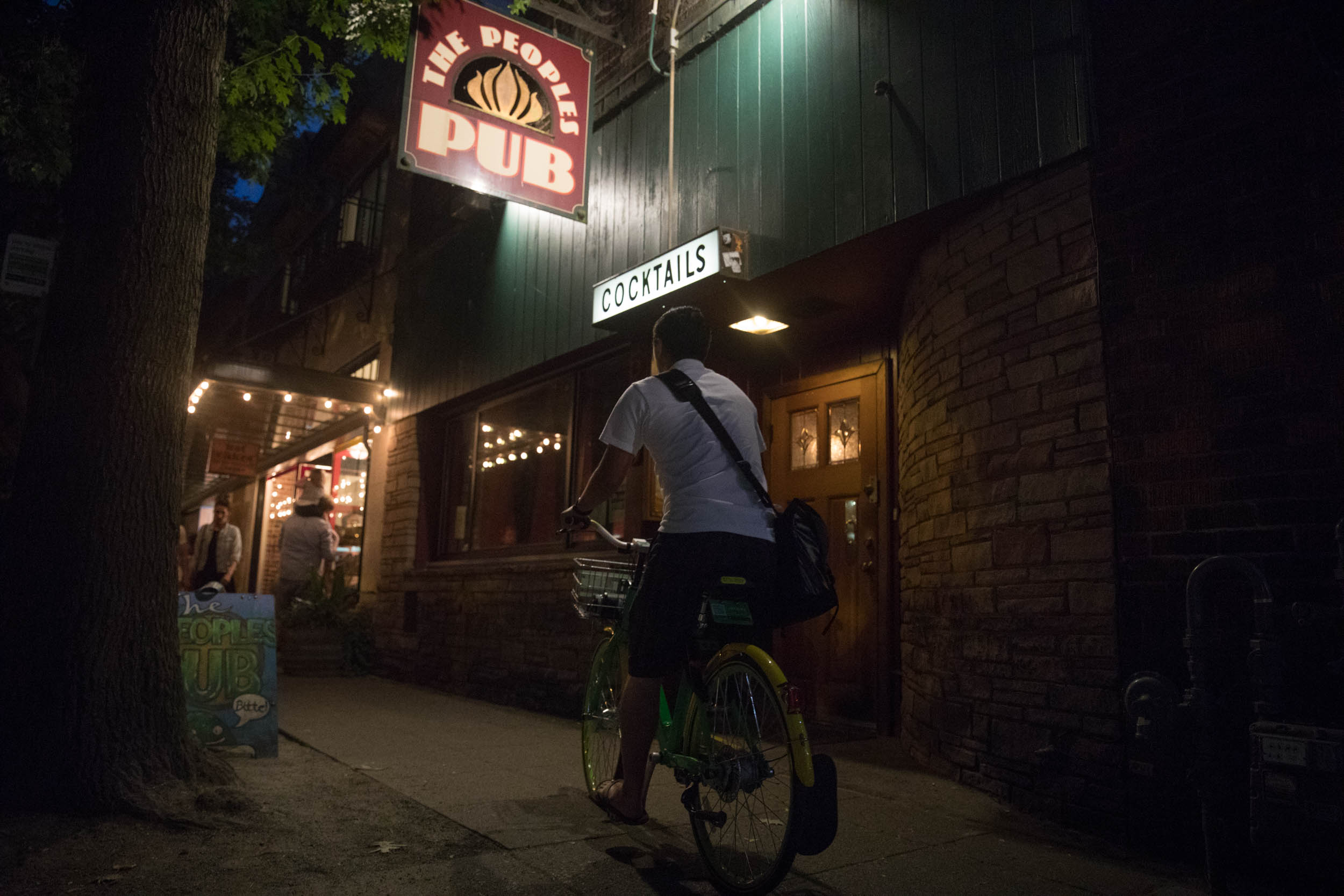 The People's Pub in Ballard closes its doors on Saturday after 17 years in business. (Photos by Matt M. McKnight/Crosscut)

The People’s Pub in Ballard is closing down this weekend, 17 years after opening. That opening seems like a long time ago now, and for some of us regulars, it seems even longer. Many of us left our youth behind there and forgot it until we heard the news that it’s really over. Saturday, August 12, 2017 is the Pub’s last day.

If you walk through the doors this final week you’ll find some of the old-time regulars and original staff there to give it one more go, myself included. Owner Drew Kondik says if the Pub were this busy normally he wouldn’t be closing.

But isn’t that how it is in a booming city — and in life? We take things for granted, thinking a beloved place will always be there, and then leap up in sadness (or protest) in that final hour, when it’s time to say goodbye. And not just to the place, but to the selves we were there. To the time that passed there. To the hodge-podge of people who hunched nightly at a too-high bar, staring at the ship canal through the back window, discovering a community they wouldn’t otherwise know.

I was one of the Pub’s original servers. I started shortly after the place opened, and knew nothing of the high-end German food and beers served there then — Maultaschen and rouladen and jagerschnitzel, Bitburger, Spaten and Kostritzer. But Drew, the owner, threw me into deep water. A Friday night. The place was packed. “If you make it through tonight, you’re hired,” he said. Three years later, I was still there.

In 2000, when the People’s Pub opened, it was part of a small wave of gentrification. Back then, the homegrown grocery, Olsen’s Scandinavian Foods, was still on Market Street. Ballard Commons Park was an abandoned grocery store and parking lot. The now-shuttered Chai House was hosting poetry slams.

Most of Ballard Avenue felt empty, just shop space and vacant storefronts. There was an artist studio with a big blinking eyeball in the window, and a welder worked the warehouse where the Loft Sports Bar now stands. Madame K’s, a brothel-themed pizza place, poked fun at Old-Old Ballard’s seedy reputation as a place constantly at moral war with itself, building a new church for every new bar.

The Pub was one of the new flashy spots on the block and it was packed. People walked in on Saturday night and walked back out — no seats available. An hour later, they returned to check again.

When the Matador and Thaiku opened shortly after, the triangle of glitzy new bars brought younger people to the neighborhood, but in my day, most of the Pub’s customers worked on Ballard Avenue. Musicians and servers mixed with drunk fisherman and frequently-defending-my-honor Chittenden Locks workers.

Owner Drew didn’t carry Budweiser — not out of loyalty to the Pub’s German theme, but because so many blackout drunks mastered saying “May I have a Bud?” without slurring. Without that option, feigned sobriety quickly fell apart.

We servers were making $700 on a slow weekend and the kitchen was full of genius chefs fueled by angry music and the newly released Kitchen Confidential by Anthony Bourdain.

Laments over the passing of Old Ballard is a narrative as old as I can remember, maybe as old as the neighborhood itself. I imagine that in 2000, old-time Ballard residents disapproved of the upscale People’s Pub replacing The Vasa, a local dive bar, just as those of us who love the People’s Pub lament that it, too, will become something like an Ethan Stowell restaurant.

Sweeping change doesn’t just come for Seattle neighborhoods; it comes for the places within them too. Over 17 years, the People’s Pub went from a packed German bar with high-end food and strong cheap drinks, to a beloved, well-worn and frequently empty dive bar. It was left adrift by the waves of gentrification it was once a part of, soon to be a memory, like the Old Town Alehouse, the Viking, Madame K’s brothel-themed pizza.

We will grieve the Pub’s passing, especially those of us who grew up there, developing asthma in its smoke-filled back room and tacking up inappropriate notes from customers in the liquor closet. We will remember days when the booze rose up to meet the crew of a docked fishing boat, and the smell from single-malt scotch night mixed with the perfume of the blond servers from up the block.

I quit my job at the Pub long ago, crying and worried that leaving the blue-collar job I loved to become a white-collar public radio producer would mean I’d no longer fit Ballard. Or worse, that I’d lose touch with my favorite customers and the staff I adored.

Owner Drew gave me a hug. “It’s OK, honey. You had to get a real job someday,” he said. “And look, we’ll still be here. You can come visit anytime.”

But we humans frequently take things for granted, and change is always coming. And sometimes “visit anytime” becomes — one last time.