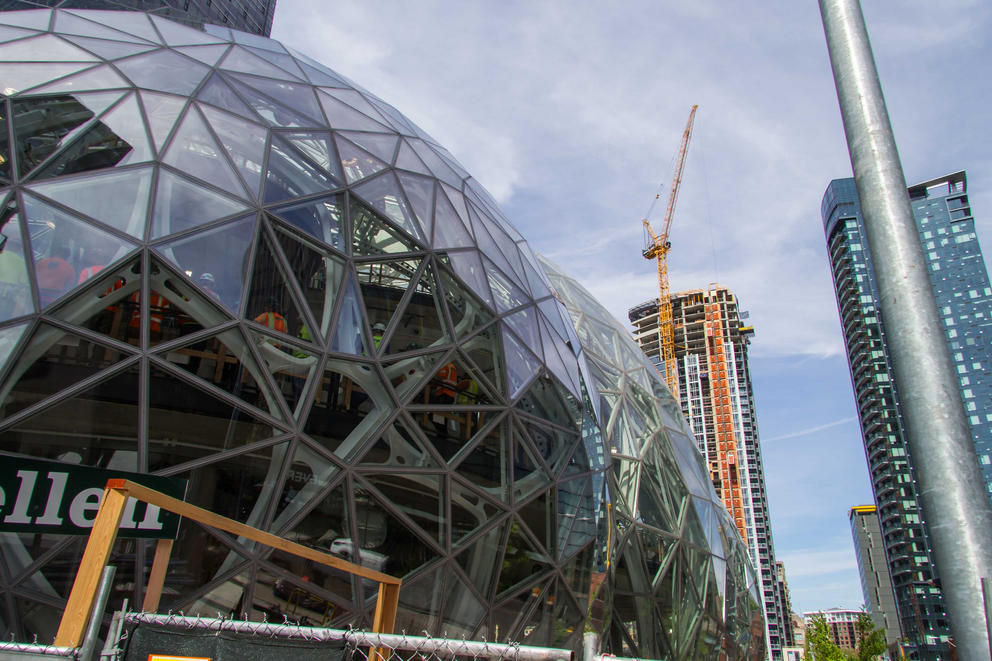 The Amazon biospheres in downtown Seattle.

Amazon’s recent announcement that it plans to open a second headquarters “fully equal” to its Seattle campus has triggered a depressingly predictable flood of panic and finger-pointing in the Emerald City’s halls of power. In an article for GeekWire, Monica Nickelsburg quoted Heather Redman, co-founder of venture capital firm Flying Fish and the incoming Chair of the Seattle Metropolitan Chamber of Commerce:

“The negative attitude of many citizens and of our government to business in general and to Amazon in particular has created an environment for Amazon and, even more importantly its employees, that is unpredictable and outright hostile. This is our chance, as citizens and elected officials, to wake up and realize that Amazon is the best thing that has happened to the city in the modern era.”

The Stranger published an article in June saying a worker has to earn $24.02 per hour to afford a one-bedroom apartment in Seattle without being “cost burdened.” The government definition of cost burdened is spending 30 percent or more of gross pay on rent and utilities.

Working backward from the Stranger’s number we can calculate that they (or a source they find credible) believe the average monthly rent for a one-bedroom in Seattle, assuming utilities are included, is $1,249.04. That seems pretty low to me, but let’s go along with it for the time being. Right away you’ll notice that the full-time job at the University of Washington doesn’t pay enough for the worker to afford a one-bedroom apartment without being cost burdened.

How cost burdened are they? At the high end, the successful candidate for this position will surrender a mere 43 percent of their take-home in rent. At the low end, they would be paying 56 percent of their take-home, leaving them $990.54 every month to buy food, clothes, telecommunications and transportation, and to pay off their student loans. Because, while a college degree isn’t required, the position states a preference for a B.A. in English. And this is no entry-level position.

You have to have: “two years of experience in administrative support, overseeing and executing office operations,” as well as a list of other qualifications that include, “dedicated and detail-oriented orientation and work habits,” and, “excellent lucid and succinct written and verbal communication skills.” Leaving aside the irony of the terrible writing and grammar on display in those requests, they don’t ask for much in exchange for the whopping ONE DOLLAR AND TWENTY CENTS they’re paying above Seattle’s admittedly inadequate minimum wage, do they?

Is that representative? Obviously I haven’t done an exhaustive study, but over on Craigslist, North Queen Anne Child Care is looking for an Assistant Director, paying $38–44k per year. They’ll accept a Bachelor’s Degree in Early Childhood Education, Education, or related social science, but they prefer a Master’s (hello, student loans) — and they’d like you to have a food handler’s permit, CPR training and all the bells and whistles. Plus, of course, you’ll be on salary, so no overtime.

Now, again, I don’t know for sure, but I’m betting the Assistant Director of a childcare facility might end up working more than 40 hours a week every so often. Which, you know, maybe that’s better. It’s not like you’ll have much money to do anything in your off hours.

The reason this is all at least partially Amazon’s fault is because not everybody can be a goddamn programmer. Statistically, an actual majority of people aren’t intellectually or temperamentally suited to one of those whiteboards-and-khakis-type jobs, and a city isn’t a college campus. Until some point in my living memory — I think it was probably the early ’90s, but a demographer might be able to prove me wrong — Seattle had all different kinds of people in it, including significant representation from the 75 percent or so of the population that got less than 1200 on the SATs. Those people used to have jobs, and they could afford to pay rent.

One of my best friends when I was a kid lived with his single mom, who was an administrative assistant for her entire adult life. She rented a two-bedroom apartment in a duplex in Ballard, with a yard and a garage. They ate a lot of macaroni and cheese, and my buddy had a paper route for spending money, but they had two bedrooms in a good neighborhood, and they had health insurance.

Whatever prosperity Amazon brings to Seattle only matters to the city as a whole if it benefits the actual people who live in the city — including the administrative assistants, the retired old people and the out-of-work forklift operator. Admittedly, there are a lot fewer of those people in the city now than there used to be, but they’re still around. And Amazon is making their lives much harder.

So if you’re an administrative assistant, or a janitor, or a file clerk in Seattle, the presence of Amazon.com (or Microsoft, or Google, or whatever) in Seattle doesn’t really do anything to improve your lot in life. All it does is bring thousands of developers, project managers and other tech workers into the city. I’m sure they’re nice people, but they earn upwards of $100,000 a year, and they like your apartment. They think the house you grew up in is charming. And they are ready and willing to pay more for housing than you could ever afford in your wildest dreams.

So now your shitty job at UW just got even shittier, because the only apartment you could afford is in Edmonds, and your commute got an hour longer.

It wasn’t always like this. And not just in the sense that there used to be jobs and housing for people in the bottom 50 percent of the wage scale. Large corporations used to bring a much broader form of prosperity to their hometowns. They paid janitors about what janitors make now, but they gave them long vacations, better leave, retirement and education packages and stable jobs that lasted for decades. Those corporations took a beating in the ’80s, so maybe that model isn’t possible anymore.

And if that’s how it is, then maybe that’s just life, and Amazon doesn’t owe it to the rest of us to care about what they’re destroying, or about the inequality they’re perpetuating. But the idea that they’re doing Seattle a favor by staying in the city is only as real as the ability of an administrative assistant to afford a one-bedroom apartment without being cost burdened — not just at Amazon, but anywhere in Seattle. And right now, if I’m an Administrative Coordinator at the UW College of Education, having Amazon in Seattle is a net loss for me, because all the rich people they’re bringing into town are driving up housing costs beyond what I can afford. My life gets a lot harder because Amazon is in town. Period.

Amazon says they’re going to open another facility in another city, and Heather Redman thinks it’s because Seattleites are being mean to them. It’s bad news for the tech worker who lives in the apartment you shared with your mom when you were a kid. It’s bad news for people who are planning to make their retirement money selling their house to that tech worker when he or she decides to have kids, and it’s bad news for all the baristas, bartenders and waiters who make their living (ranging from meager to, admittedly, pretty good) serving drinks and artisan cheeses to brogrammers and woo girls.

There are secondary industries that really do depend on Amazon and its employees. But, Seattle did exist before Amazon. Everyone gets hot and bothered over all this tech money, but it’s not like Seattle’s going to dry up and blow away if Amazon strong-arms Washington D.C. into signing Navy Yard over to Jeff Bezos in its entirety, and the headquarters moves to the East Coast.

Plus — and this is just me daydreaming, but you have to ask yourself  —  if tech money retreated from Seattle to such a degree that the city’s hospitality industry actually took a meaningful hit, would rents go down? Would Hardwick’s maybe not go out of business? Obviously finding the balance there is tricky. I’ve been spending some time in Baltimore lately, and I wouldn’t want a lot of their problems. But with a nice two-bedroom house in a decent Baltimore neighborhood going for $200,000, there’s an undeniable vitality to certain pockets of the city.

If you were an actor, or a painter, or you wanted to start a pizza restaurant, you could do it in Baltimore without having to mortgage your entire future. There are old people on the street, walking to the grocery store. They haven’t all been priced out. Their schools are, supposedly, Boschian hellscapes. But that’s just the rumor. That used to be the rumor about my high school too, and I loved my high school.

Most of my friends are tech workers in Seattle. Some of them even work at Amazon. I don’t want Seattle’s tech industry to collapse. But asking the people who live in a place — who were born there, and grew up there, and regard that place as their home, and part of their identity —  asking them to be happy about a company that creates conditions that force them out of their home, and offers them nothing in return except a threat that the company will move somewhere else if you don't smile while they’re screwing you — that’s a lot to ask.

As far as I know, Amazon didn’t ask for it. Or they haven’t yet. Seattle politicians shouldn’t be so quick to offer it. And if Heather Redman thinks Amazon is the best thing to happen to Seattle in the modern era, she should maybe move to somewhere else. Because she’s no friend of Seattle. 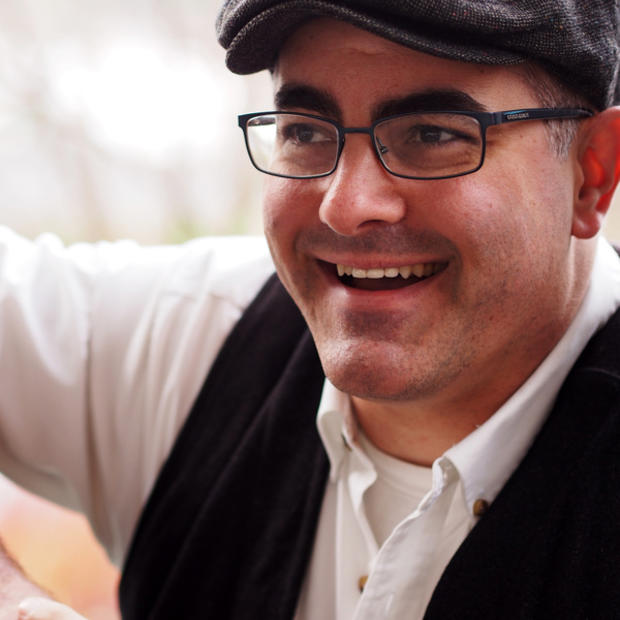 Jason Schmidt is a PNW native, and author of the memoir A List of Things That Didn’t Kill Me, published by Farrar, Straus and Giroux. 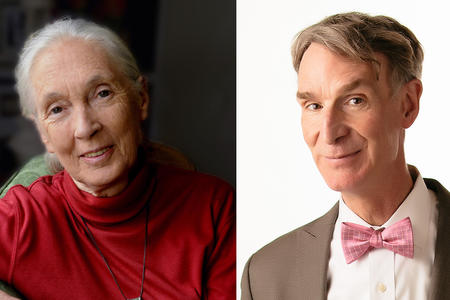 It’s Earth Month, and we’re honoring our science and nature advocates joining us at the festival in May.