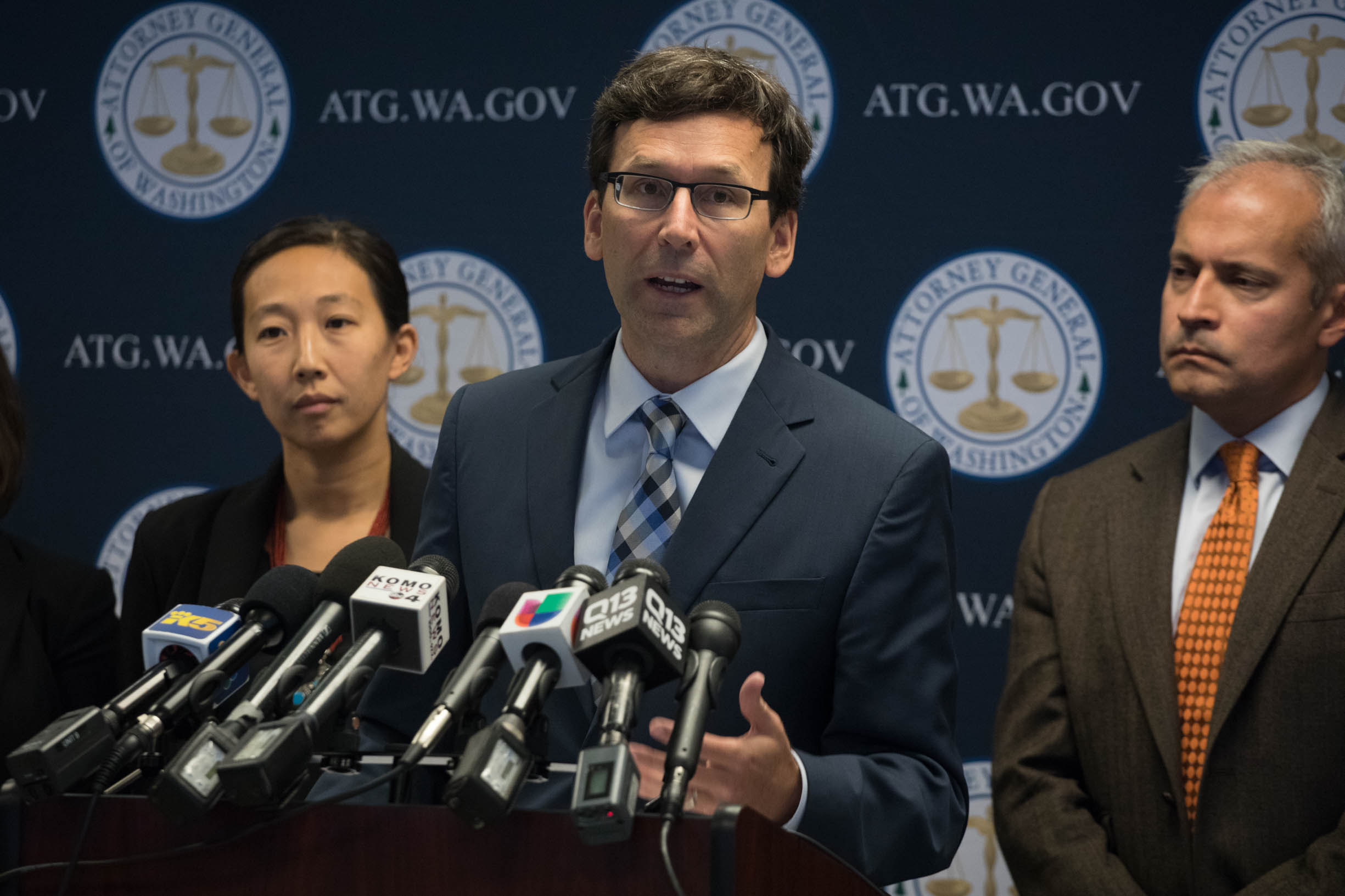 Washington state Attorney General Bob Ferguson discusses a lawsuit against GEO Group and its Northwest Detention Center in Tacoma during a press conference in Seattle. September 20, 2017.

The lawsuit alleges that GEO Group, Inc., the second-largest private prison provider in the country, has for years violated Washington State's minimum wage law, paying its workers $1 per day or in some instances, with snacks and extra food.

At a press conference in downtown Seattle on Wednesday, Ferguson noted that the state's minimum wage law requires that workers be paid at least $11 an hour.

“Let’s be honest about what’s going on," Ferguson said. "GEO has a captive population of vulnerable individuals who cannot easily advocate for themselves. This corporation is exploiting those workers for their own profits."

Ferguson explained that the state minimum wage law is clear: Only inmates who reside in, say, a state, county, or municipal detention center would be exempted from earning the minimum wage.

"In contrast with a jail or prison, which houses people involved in the criminal justice system and are operated by state or local governments, detainees at NWDC are held in a private, for-profit facility pending civil immigration proceedings," reads a press release.

In a statement, GEO said it "strongly refutes the baseless and meritless allegations made in this lawsuit." The company argued "the minimum wage rates and standards associated with the program," which it referred to as a volunteer worker program, "are set exclusively by the federal government."

Ferguson said many of the detainees at the detention center are being held for minor infractions, such as traffic violations; the work they perform include cleaning, laundry and serving food.

Although the work is performed on a so-called volunteer basis, Ferguson said many of the detainees feel compelled to participate. If no one volunteers, "guards will sometimes pick detainees to perform the work," attorneys said in a press release.

According to Ferguson and other Washington attorneys, GEO Group has run the Northwest Detention Center, the fourth largest immigration detention center in the country, since 2005.

Attorneys also say that GEO, a company based in Florida, has been working with U.S. Immigration and Customs Enforcement since the 1980s. In 2015, ICE renewed GEO's contract for the detention center through 2025. The company projected the detention center would bring $57 million in revenue every year if operated at full capacity.

GEO Group runs more than 100 correctional and detention facilities in the country and has faced a variety of lawsuits, including a class-action lawsuit by current and former detainees at a Colorado facility, which alleges forced labor.

Detainees in Tacoma have for years protested the living conditions at the center by participating in numerous hunger strikes.

Ferguson said he expects GEO to pay back the millions in profits it's earned "off the backs of exploited workers."

"GEO has to follow the law," Ferguson said. "And that's not happening here."