Autopsy shows police shot 20-year-old in the back 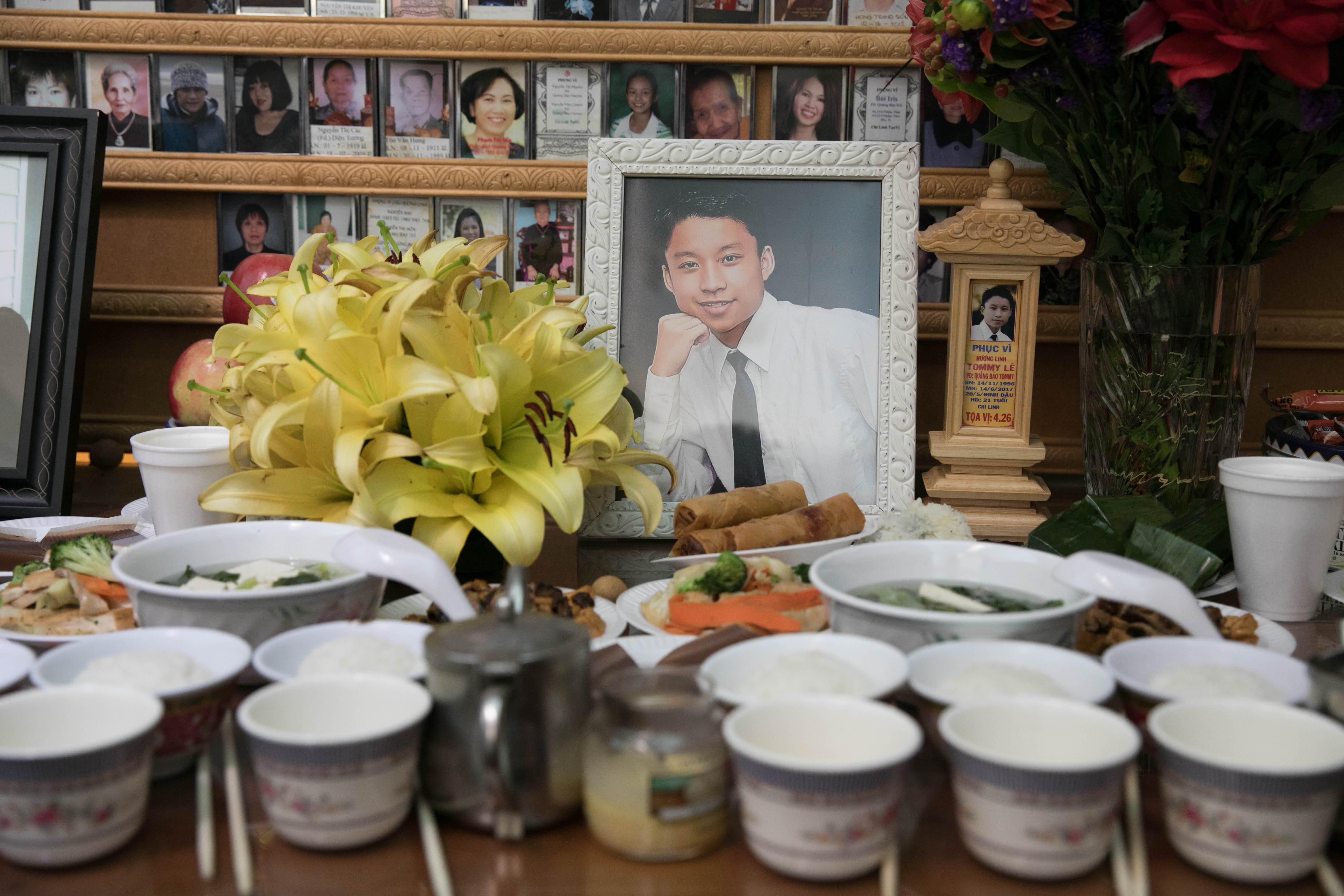 A photo of Tommy Le at his memorial service at Colam Pagoda Buddhist Temple in August.

Adding dramatic accusations to a summer of questions about local police shootings, the family of a 20-year-old man shot by deputies in Burien made public an autopsy that showed the fatal shots entered his back.

The family of Tommy Le also filed a $20 million claim in federal court alleging the King County Sheriff's Office must have known from the beginning that it was misrepresenting him as having a knife in his possession when he was shot. A little more than a week after the June 13 shooting, the department told Seattle Weekly reporters that no knife was found on Le, but he had been threatening deputies with a pen.

Attorney Jeffery Campiche said the family’s aim in filing the claim, a necessary step before launching a lawsuit, is to win federal court intervention to protect civil rights and protect people from unnecessary use of deadly force by King County deputies.

A spokesperson for the Sheriff’s Office, Cindi West, said the department has not reviewed the claim and couldn’t comment. But she said the department disagrees with the idea that it has inadequate practices to protect people from the use of deadly force.

West also took issue with the family’s assertions about how officials portrayed the question of whether he had a knife, saying that it was only relaying the 911 callers’ descriptions of a possible knife. West said officials hadn't ever told the family he was shot because he had a knife, and that Sheriff John Urquhart had met with family members July 7, “and specifically told them that Tommy was carrying a pen at the time of the shooting, but we believe he had a knife during the original 911 calls.”

The autopsy report released by the family includes a toxicology report showing that no drugs were found in his system, and Campiche said there was no indication of drug-use effects on his internal organs. But West said, “We believe he may have been under the influence based on evidence in Tommy's room and interviews with one of his friends. Detectives specifically requested tests for LSD and mushrooms which have not yet been completed.”

Authorities have said deputies were responding to a report of a man yelling about being the "Creator" and moving toward people with a knife or something sharp. The deputy who shot Le, Caesar Molina, did so after a Taser was first used on him, officials said; the autopsy found marks from a Taser on his chest.

The shooting is currently under investigation by the sheriff’s Major Crimes Unit and that investigation will be reviewed by the FBI and the U.S. Attorney’s Office. West said the Sheriff’s Office looks forward to having the county prosecutor schedule an inquest, “which will reveal all aspects of the case.”

Campiche, the Le family’s attorney, said the federal court system is much better equipped to find the truth than an inquest.

He said it would have been safer and quicker for a deputy to keep using the Taser. And he repeatedly noted the shots in the back, which the family only learned of when it received the autopsy in recent days. A third shot struck a wrist in a spot that fits with being shot from behind, Campiche said. “If he was charging the police officer, he would have been shot in the chest,” he said.

“The Sheriff’s Office has not yet used the word ‘mistake,’ ” Campiche said, “and that is the word that should have been used to start with. It was a mistake to kill this young man, a terrible mistake. A mistake that has devastated the loving family and distressed the community [in] which he lived. First, the Vietnamese-American community, then the broader Asian community and then the rest of us.”

The family portrayed Le as studious — “a bookworm,” said a 27-year-old aunt, Uyen Le, who grew up in the same house with him. She and Missouri Le, a 24-year-old cousin who said he felt more like a big brother to him, recalled his love of stopping at a Barnes and Noble bookstore. Campiche said that Tommy Le had left two books open in his bedroom, “The Count of Monte Cristo” and “Faust.” He was set to graduate from a high school-completion program on the day he died, and had taken courses aimed at pursuing a career in firefighting, the family said.

Campiche said that efforts to get the department to show them the pen have been unsuccessful. He suggested that a man dressed in a T-shirt, running shorts and flip flops would have been unlikely to be carrying a pen.

Campiche and family members said Le had never received any kind of mental health care, and they were unaware of any event that might have triggered any kind of erratic episode. They say they were in daily touch with him. The claim notes that police are supposed to have training in handling people who appear to be emotionally distressed without resorting to deadly force.

Echoing complaints about the recent Seattle police shooting of Charleena Lyles, a thin, 30-year-old African-American mother, Campiche questioned how deputies could have felt endangered by Le, whom he described as “not only unarmed but a 5-foot-4, 120-pound young man."

Le's family followed their Mahāyāna Buddhist faith's strictures against speaking publicly about him during the first 49 days after his death, a period in which controversies grew over other police shootings in recent years and months, including Lyles and Giovann Joseph-McDade, a 20-year-old African-American college student shot by Kent police.

Coincidentally, a number of the families took part in a separate press conference Thursday about efforts to strengthen legal strictures against unjustified shootings by police through an initiative measure.

“The only way to get justice for Charleena so her life isn’t in vain is to pass this initiative — I-940,” Katrina Johnson, a cousin of Charleena Lyles, said at the press conference. “So that we can change the law, so if they decided to do this to someone else they can begin to be held accountable for what they are doing.”

If passed, I-940 would require all law enforcement officers to receive violence deescalation and mental health training, require officers to provide first-aid and change state laws surrounding the use of deadly force. Under current law, police officers cannot be convicted of a shooting unless there is proof they acted in malice.

“We have an archaic, outdated and troubling system of justice if our officers are allowed to simply shoot people in the street and our cases aren’t heard in courtrooms,” said James Bible, an attorney who has represented many of the families. “At this moment we have to acknowledge that this system in the state of Washington is broken because it’s absent. It’s absent because this is no mechanism to truly evaluate police action.”

So far this year, 28 people in Washington state have been killed by police, according to a database maintained by Killedbypolice.net. That puts the state just one short of the total of 29 deaths in all of last year.