How much can really be done on gun control locally? 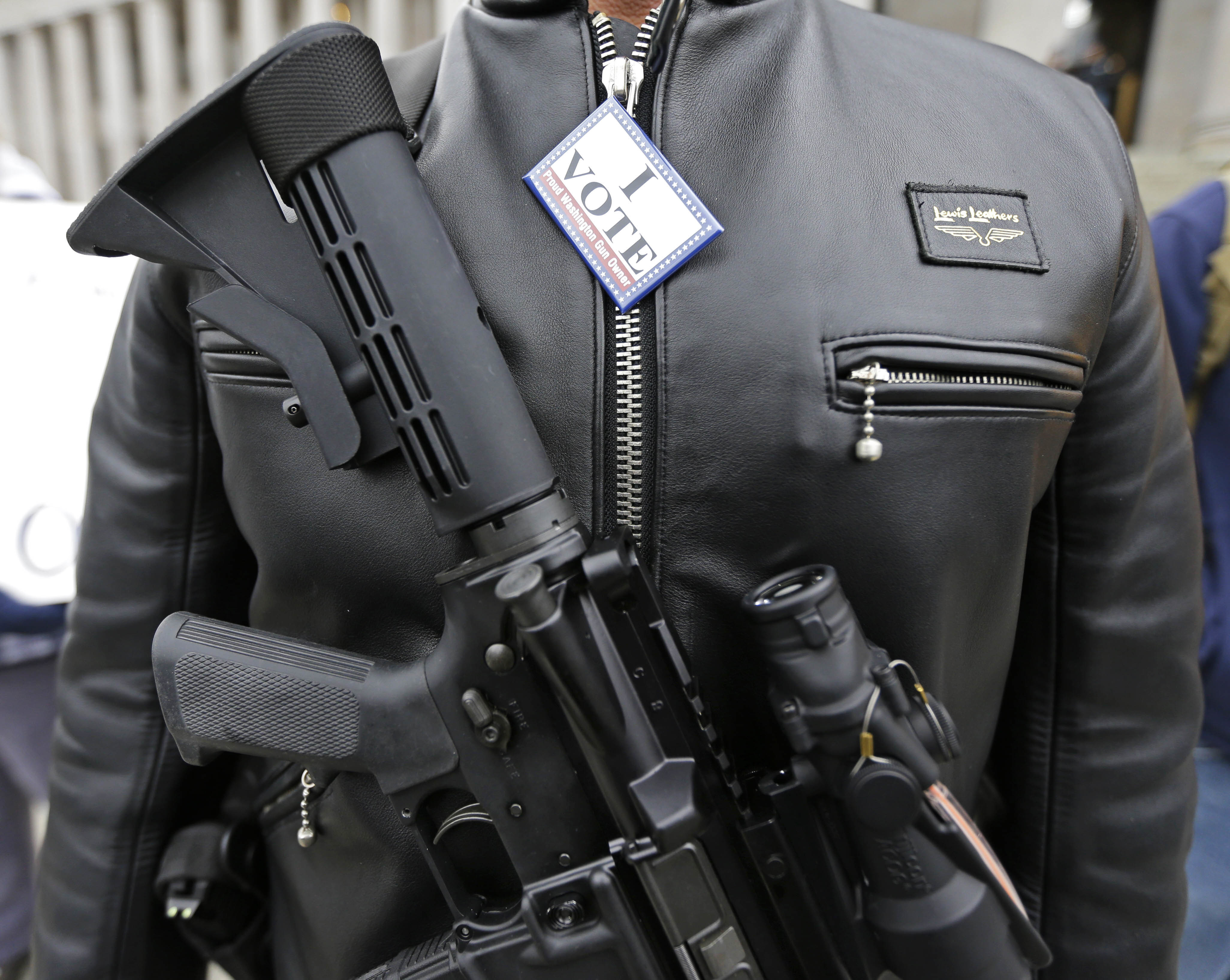 In this Jan. 15, 2015 photo, Mark Ramirez of Bainbridge Island, Wash., wears his Colt M4 gun and a button that reads "I Vote - Proud Washington Gun Owner," during a gun-rights rally at the Capitol in Olympia, Wash. (AP Photo/Ted S. Warren)

After one of the deadliest shootings in American history, Washington residents are questioning what if anything can be done locally to prevent similar tragedies from happening here.

In Washington state, recent discussion has focused on two issues: a Washington resident's easy access to an assault weapon and the safe storage of such weapons and other guns.

While details are still emerging, the Las Vegas shooting stands apart from other mass shootings in that the perpetrator is older, with no apparent history of instability and apparently acquired his weapons legally.

Still, some experts argue there is more that can be done with regard to Washington state's gun-control measures to prevent or reduce the likelihood of many types of gun deaths, including mass attacks.

Frederick Rivara, a professor in the University of Washington’s Department of Pediatrics studying injury prevention, calls Washington’s gun-control laws middle of the road. In 2015, for example, the national nonprofit, Brady Campaign to Prevent Gun Violence, ranked states based on gun-control laws, giving Washington a score of 33 out of 100 possible points. Rivara pointed to the 2016 shooting in the Seattle suburb of Mukilteo, when 19-year-old Allen Ivanov used an assault weapon to kill three people at a house party, as a tragic incident, which illustrates why the state needs to strengthen its laws, especially with regard to assault weapons.

While calling the massacre in Las Vegas “terrible,” Rivara said, “we’re also losing thousands of people each year, day in and day out." Rivara noted that the vast majority of gun deaths in Washington — 80 percent — are due to suicides, but he said that more people in America have died as a result of guns than all U.S. wars combined.

Currently, anyone in Washington over the age of 18, who passes a background check, can gain access to an assault weapon, such as several of the rifles that 64-year-old Stephen Paddock reportedly used in killing more than 50 people in the Las Vegas shooting on Sunday. In contrast to the state's existing 18-year-old minimum age for buying assault weapons, a Washington resident must be at least 21 years old in order to purchase a handgun.

Washington Attorney General Bob Ferguson this year proposed the outright ban of assault weapons and high-capacity magazines in the state or, alternatively, enhancing background checks and raising the minimum age required to buy such weapons.

State Rep. Laurie Jinkins, D-Tacoma, is sponsoring a bill that would do what Ferguson wants: It would, for example, raise the age requirement for assault weapons to 21. Jinkins, however, says the bill has run into obstacles because there is no broad consensus on what constitutes an assault weapon. Jinkins would like Washington to more heavily regulate any high-capacity firearm capable of firing multiple shots per second.

“I’m completely done with sending prayers and thoughts," Jinkins said. "What we really need to do is change what we do with these firearms.”

“I just really wish," she said, "that learning things [from mass shootings] changed what we did as Americans.”

Democratic legislators are also attempting to pass a law that would make gun owners who didn’t safely store their weapons criminally liable.

Rep. Ruth Kagi, D-Seattle, is currently sponsoring a bill on the safe storage of guns. If someone failed to safely store their firearms and a child or anyone prohibited by law from owning a gun gained access to it and hurt someone, according to the bill, the gun owner could be held criminally liable. Researchers have pointed out that states with such laws — 27 other states and D.C. — have witnessed a 23 percent drop in unintentional firearm deaths among youth younger than 15.

In 2014, Washington voters passed an initiative to expand background checks to cover all private sales and transfers of guns. According to the nonprofit, Alliance for Gun Responsibility, 3,000 gun sales to prohibited purchasers, including felons and domestic abusers, are prevented every year thanks to the law. (On Monday, a panel of judges of the U.S. Ninth Circuit Court of Appeals heard arguments challenging the law in a lawsuit brought forward by opponents of the legislation.) And voters last year approved the creation of extreme risk protection orders, which allows family members to go to court if they believe a relative is at extreme risk of harming themselves or someone else with a gun. The judge evaluates the evidence and, if necessary, can bar an individual from owning a gun for up to a year.

The “whole intent is to keep guns out of hands of people who should not have them,” Kagi said. “It’s slow going, but I think the continuing drumbeat of these tragedies really helps build support.”

She added, "I think the public is way out ahead of us on this issue.”

Representatives of gun-rights organizations could not be reached for comment Monday afternoon. The legislative record shows that opponents of the safe storage bill have called it an attempt "to regulate common sense" and argue training and education are the best ways to prevent inappropriate access to firearms.

“We should not pretend this is not preventable," mayoral candidate Jenny Durkan said in a press release. "We should not accept this is an unavoidable consequence of Constitutional freedom. We should not allow this to become normal. If Washington D.C. cannot act, Washington state and Seattle should. We can and should work together to enact rigorous laws to prevent these attacks."

In addition to the recent ballot initiatives, state lawmakers this year passed a bill providing for law enforcement to be notified when someone who is legally barred from possessing firearms attempts to make a gun purchase. People with protective orders can also be notified. In a Facebook post on Monday, state Rep. Drew Hansen, D-Bainbridge Island, suggested that it's the type of bipartisan action — his co-sponsor was Republican Rep. Dave Hayes of Camano Island — that is much more possible in a state Legislature than in Congress.

Seattle’s ability to regulate firearms is handcuffed by state law, which preempts cities from passing their own gun-control laws. Still, Seattle has done two things in particular. First, it passed a $25 tax on all firearm transactions. The tax was challenged in the courts as attempting to regulate guns, but the Washington Supreme Court disagreed and let it stand. And in his budget proposal last week, Mayor Tim Burgess proposed adding up to five new city employees to enforce the state’s firearm surrender law, which allows courts to strip domestic abusers of their firearms.

The Seattle City Council still needs to approve the funding.

This story has been updated since it first appeared to add information about Rep. Hansen's measure.