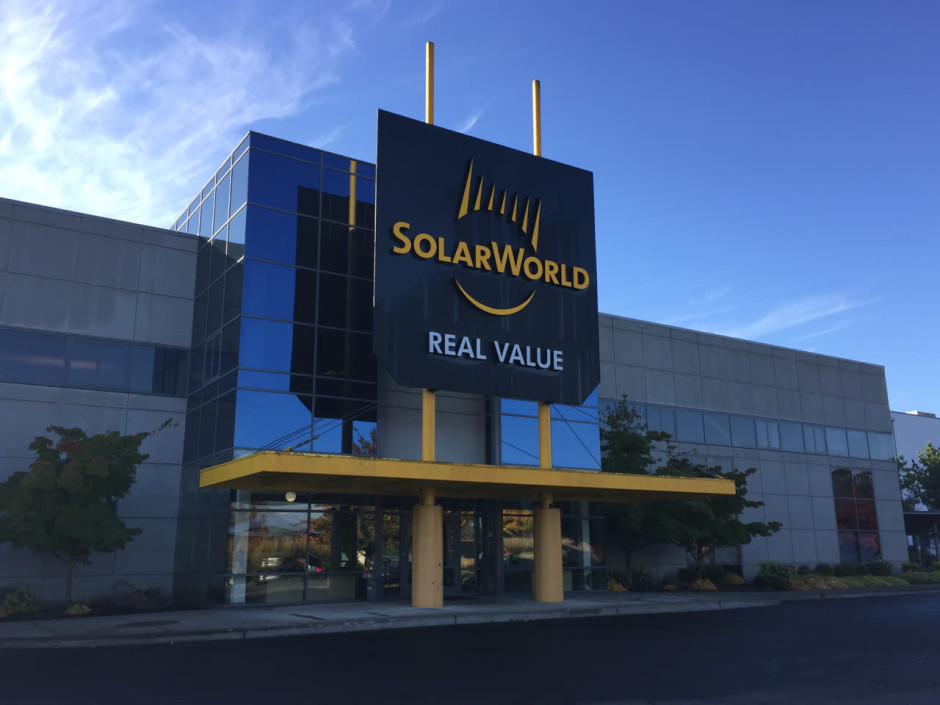 In Hillsboro, Oregon, SolarWorld is hiring back workers and planning to ramp up its production now that President Donald Trump has approved a 30 percent tariff on imported solar panels.

“My administration is committed to defending American companies,” President Trump said before signing a proclamation of import duties on Jan. 23, “and they’ve been very badly hurt from harmful import surges that threaten the livelihood of their workers.”

Since 2012, U.S. solar panel imports have skyrocketed, and prices have dropped 60 percent, according to the findings of a trade investigation. The surge of cheap solar panels from overseas has wiped out nearly all U.S. solar panel manufacturing.

SolarWorld Americas, Inc. is one of the only manufacturers still standing. Attorney Tim Brightbill, who helped the company make the case for tariffs, said he’s hoping U.S. solar manufacturing can now make a comeback.

“This case is about saving and rebuilding the U.S. industry,” said Brightbill, a partner with the law firm Wiley Rein. “SolarWorld is cautiously optimistic that this decision will begin that process.”

The approved four-year tariffs are less than what was recommended by the U.S. International Trade Commission. The 30 percent tariff, set to kick in within weeks of President Trump’s proclamation, would only last a year and would decline to 15 percent in four years.

In contrast to the recommendations of trade commissioners, the tariffs will exempt the first 2.5 gigawatts of imported solar cells as long as they are manufactured into panels in the U.S.

Still, SolarWorld is hiring back hundreds of laid-off employees, and Brightbill said the company is hoping to come back from a low of just 300 workers to to 800 or 1,000 “depending on how well the tariffs work and how strong solar demand is.”

The rest of the solar industry – including solar panel installers and related businesses – worries the tariffs will raise prices and cost tens of thousands of jobs.

Some analysts are predicting the four-year tariff will result in a 10 to 15 percent decline in U.S. solar installations.

Scott Lincicome, an international trade attorney with White & Case, said the whole point of imposing tariffs is to raise prices for solar panels in the U.S.

“And that’s exactly what I’d expect to see,” he said. “The solar industry overall was opposed to this measure because they have hundreds of thousands of jobs that are blue-collar American jobs related to solar panel installation. If you increase prices, you decrease demand, and you’re going to have fewer installation jobs.”

The U.S. already levies tariffs on solar panel imports from China, which has aggressively promoted its solar industry through subsidies and loan and now produces more than 60 percent of the world’s solar cells and modules.

The new tariffs would apply to panels coming from other countries, where the Trump administration says Chinese companies have moved their production to evade the existing trade restrictions.

Some have expressed concern about retaliation from China in light of earlier solar trade disputes.

After the U.S. imposed tariffs on solar panels imported from China and Taiwan in 2012, China put its own tariff on polysilicon imported from the U.S.

Polysilicon is used in the production of solar panels, and China’s tariffs prevented polysilicon manufacturers like REC Silicon in Moses Lake, Washington, from competing in China’s rapidly growing solar market.

REC Silicon had to lay off half of its employees and now, like other U.S. polysilicon manufacturers, It’s struggling to stay in business.

Trump said Tuesday that “there won’t be a trade war” because of the new tariffs.

“There will only be stock increases for the companies that are in this country,” he said. “You’re going to have people getting jobs again, and we’re going to make our own product again. It’s been a long time.”