Why does King County want to ban smoking in parks? 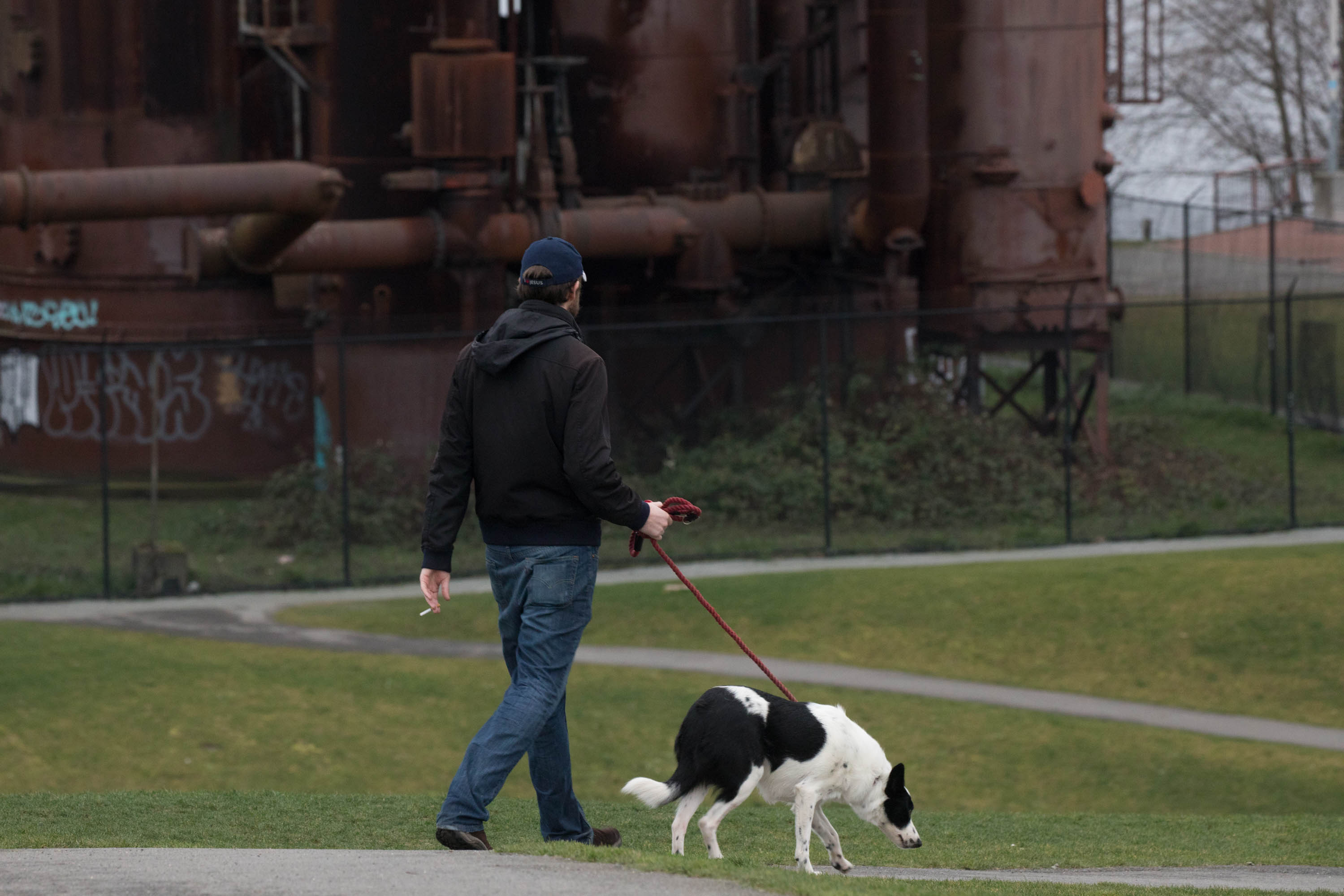 A man with a cigarette walks through Gasworks Park in Seattle, Jan. 26, 2018. Credit: Matt M. McKnight/Crosscut

Visit a public park in Bellevue, and you can light up a cigarette, chew tobacco or puff on an e-cigarette all you want. Do so in Kent, and you're technically breaking local law. In Seattle's city parks, it's verboten to smoke, but chewing tobacco and vaping are still OK.

Across King County, there's a patchwork of different policies like these that govern tobacco use in public parks, and regional health officials now want to address that inconsistency.

The King County Board of Health — which oversees health policy countywide — formally began discussions this month about imposing what could be a total ban on tobacco use and vaping in all public parks.

"Whatever we do, I want it to have a grounding and a basis in public health and in our main goal of combating cancer," said Rod Dembowski, the chair of the King County Board of Health and a King County Council member.

If approved, Dembowski said, such a ban would supersede the varied policies that the county's 39 cities or King County's own park system might already have. About half of the cities don't actually have any policy whatsoever, according to Public Health-Seattle & King County (for details, see map below).

Officials aren't rushing into any definitive decision on a countywide ban, though.

No specific language has yet been proposed. Rather, Board of Health members plan to spend the next several months getting input from local community leaders and talking through potential complications associated with a sweeping prohibition — such as how consistently it would be enforced, since that responsibility would likely fall to individual municipalities.

Officials also have to grapple with questions over the scientific basis for such a proposal — including conflicting research on the effectiveness of such bans and on the risks of vaping. Some skepticism surfaced during the Board of Health's first discussion on the topic in mid-January.

"I don't see a substantial amount of evidence presented here that this degree of exposure that would occur in a park is enough to be a public health concern," said Dr. Bill Daniell, a health professional who sits on the board. "It's hard for me to imagine the number of park situations where people could be in that level of proximity and they couldn't just move, for example, or ask the person to move."

For several years, communities nationally have trended toward smoke-free and tobacco-free park policies, as the U.S. surgeon general continues to warn of the health consequences to smoking and tobacco use.

Researchers at Columbia University in 2013 explored the trend, though, and concluded there was "weak" evidence for claims that such bans were justified by the risk of second-hand smoke, the pollution of cigarette butts or the risk to children of the visual cue of someone smoking in public. Rather, those experts found the policy initiatives were largely "designed to denormalize smoking" and had "as their ultimate goal, a profound transformation in public norms and behavior."

Meanwhile, the public health campaign to promote smoke-free parks has continued to grow. King County Tobacco Prevention Program Manager Scott Neal recently told the health board that more than 1,500 municipalities across the country have some form of a ban in their parks.

Several King County cities are among those that have enacted varying degrees of prohibitions — including Seattle, which adopted its no-smoking-in-parks policy in the summer of 2015. The proposal drew backlash then over fears that homeless people might be disproportionately targeted by any enforcement measures.

Two and a half years later, though, concerns about aggressive enforcement haven't materialized. Seattle Police Sgt. Sean Whitcomb told Crosscut that officers have issued just nine tickets for people smoking in a public park since the city law was enacted. All were written in 2017 and five of them came on May 26, which happened to be the first day of the Northwest Folklife Festival. He said, "It’s not something we completely ignore, but in the realm of keeping the public safe and ensuring that we are being judicious with our resources, we want to make sure our presence is going to make a difference in regards to public safety and keeping the peace."

Timothy Harris, founding director of The Real Change Homeless Empowerment Project, which once protested Seattle's ban, said from his observations, enforcement "has been mostly a non-issue for homeless people" in the city.

Harris said by email, "When it's enforced at all, people get told to put it out and maybe handed some literature on quitting. Seattle's has turned out to be a 'denormalization' public health approach, and not really about criminalization." The police don't have data on verbal warnings, according to Whitcomb.

The city of Kent has taken a similarly hands-off approach to enforcement of a 2017 ban on tobacco use, smoking and vaping in its public park facilities. Enforcement largely rests on signage and educating people in parks who violate the ban, Kent parks director Julie Parascandola said.

"Our police department has many, many higher priorities than hunting down smokers," Parascandola acknowledged. "Enforcement, to us, is trying to change behavior. ... Our main intent is we want a healthier Kent. We’re doing everything we can to try to support and influence that type of behavior."

Dembowski said he'd support a similar approach for any countywide ban the Board of Health might approve.

"Personally my view is a light touch on enforcement," he said. "I think most folks follow the rules. Mostly what I’d like done is an education campaign with signage; I don’t know that I would be supportive of fines."

In the parks that King County operates, smoking and tobacco use is banned now only in "high-use areas" where people gather – such as ball fields, dog parks, parking lots, picnic shelters and playgrounds.

But the signage the county has posted in those areas isn't always effective.

Some visitors in the county's Marymoor Park in Redmond on a recent afternoon said they observe people smoking frequently in the off-leash dog areas, despite well-displayed signage that alert visitors of the ban.

"There’s been a few times down by the water where I’ve seen people, right in front of the creek and  next to the 'no smoking' sign," said Teresa Potter, who takes her dog Vinnie to the park at least three times a week.

Some parkgoers, like Potter, said they favor at least a partial ban on smoking in public parks, as the county has now. But others raised concerns about the government infringing on personal choice by overly restricting tobacco use.

"I don’t smoke myself, but I don’t think they should be involved in other people’s lives that way," said Matt Purdy, who likened a smoking-in-parks ban to Seattle's new soda tax. "To me, it screams they don’t trust me to make decisions with my own life. Smoking might be a little different, because it creates second-hand smoke that bothers other people, but it’s down the same path."

In making the case for a complete ban, the Tobacco Prevention Program's Neal emphasized to the Board of Health that there's "really no safe level of secondhand smoke" and that "model" policies for banning smoking in parks should include vaping – although research is still mixed on the dangers e-cigarettes could pose.

"We still do not know the potential extent of the problems these products may cause for adults, but what is clear — according to the surgeon general — these products are not harmless and they're definitely not safe for youth and young adults, primarily because they include nicotine," Neal said.

A recent report by the National Academies of Science, Engineering and Medicine echoed the addictive nature of e-cigarettes, while also concluding that teens who use e-cigarette devices may be at a higher risk of smoking. However, a separate study published by Public Health England was more positive toward e-cigarettes, concluding they were "significantly less harmful to health than tobacco" and could be beneficial to smokers trying to quit.

Dembowski said whether vaping would be included in a countywide ban is ultimately "on the table for discussion. "There may be some positive health benefits for those getting off tobacco but also some concern about it being a gateway" to smoking for non-smokers, he said. "I’ll be interested in seeing what public health officials say." 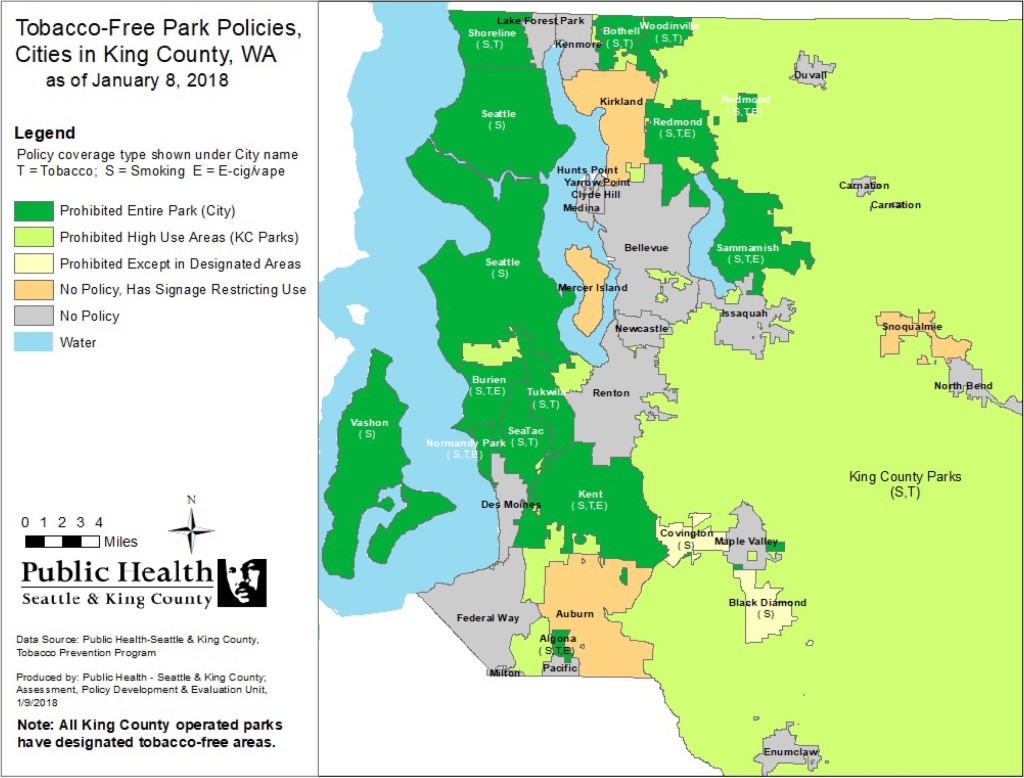