I'm a student journalist. The Legislature should protect my rights, too 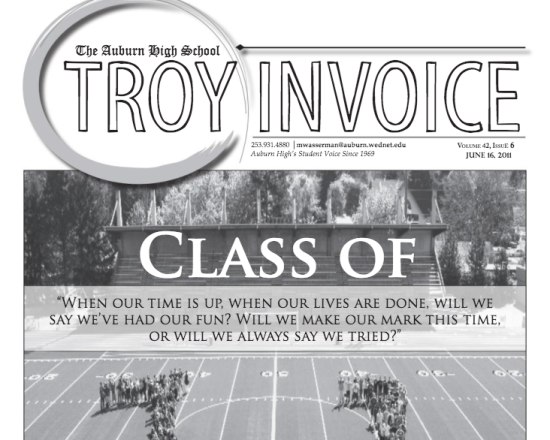 A 2011 edition of Auburn High School's newspaper the Troy In Voice.

In 2015, a student journalist for Auburn High School’s newspaper published an article about how students without parking passes weren’t being given tickets. Those who were paying for a parking pass wanted refunds because the passes weren’t being monitored. To the school’s credit, it was difficult to monitor who was a school visitor versus who was a student because of limited parking due to construction.

The high school didn’t work under prior review, so the article was published with no problem. In the article, the principal at the time promised the school “would offer free, safe and monitored parking” the following school year after construction was completed. None of that became a reality. The next year, my car was keyed, but there was nothing I could do about it because nothing had changed and the security cameras still didn’t work.

Then I remembered the principal’s promises and the article that had been written in the student newspaper, The Troy In Voice. I showed him a copy of the story and pointed out his quote that it would be “free, safe and monitored” and shared how that wasn’t my experience. Although nothing happened, I still realized the power of the press — even the student press.

Had the high school engaged in prior review — when administrators look over the publication before it is sent to press — things could well have been different and the administration might have cut the story holding them accountable. In fact, many schools in Washington do allow their school administrations to make decisions on what can be published.

This could change if the Legislature decides to do something about it.

If passed, Washington state Senate Bill 5064 would provide greater protections for high school and college journalists. While part of the New Voices Act legislation, which passed in Oregon in 2008 and has passed in 10 other states so far, the efforts to pass legislation through Washington's House of Representatives failed last year.

Not only is prior review contrary to students' First Amendment rights, but it is time-consuming and unrealistic. Publication deadlines are an essential part of journalism, and the time it would take for an administrator to read every newspaper and yearbook page isn’t just unrealistic, it takes away the glory of a student publication.

A student newspaper is a place for students — supported by an adviser — to practice and learn from mistakes like misspellings or using the wrong title for a teacher. If an administrator spell checks for students, where does the learning curve go? Why would it be called a student publication if administrators are moderating it and making the final decisions? A lot of journalism is learning through mistakes, and the best place for these minor mistakes to happen is while in high school. After each issue of the paper where mistakes were printed, staff reporters became not only stronger writers, but stronger journalists.

We also would never publish a one-sided story. I remember an instance in which my adviser invited a police officer to speak with a reporter who was reporting on police brutality. Advisers are vital to a high school newsroom. At my paper, no staff member was allowed to publish content until the adviser felt confident that the student understood the rules on what was — and wasn’t — allowed. This new bill would extend protection to journalism advisers against retaliation by school districts.

So much time and dedication goes into working on a school publication, and there is no harm in a controversial story that is written and fact-checked properly. It baffles me that a student can put hours into writing a story and, without extensive explanation, an administrator can make the decision that it won’t be published. High school journalists should be treated no differently than professional journalists, especially if they have oversight from an advisor.

This is the third year that I am testifying on behalf of this bill. Last year there were several students who spoke out in favor of the bill, and I believe that makes a huge difference. It affects students so they should be testifying and standing behind the bill. The more representatives see student involvement (as well as educator involvement) and their passion, the more likely the bill is to be passed. Last year after I testified, a few representatives followed me into the lobby and handed me their business cards. Student voices are meaningful, and it was refreshing to be taken seriously.

I will testify again Wednesday morning (and every chance I get) because I have seen how important it is for student journalists to work in a culture of openness and transparency. I’ve been fortunate enough to be able to learn by doing and to not have my work as a student journalist censored. I’m testifying on behalf of student journalists who have found their voice in journalism and those who want to be heard in the future.

The full potential of a student publication should never be in the hands of an administrator; this bill would ensure that.

Mariah Valles is a freshman at CWU and works as the Social Media and Website coordinator for the Observer newspaper.