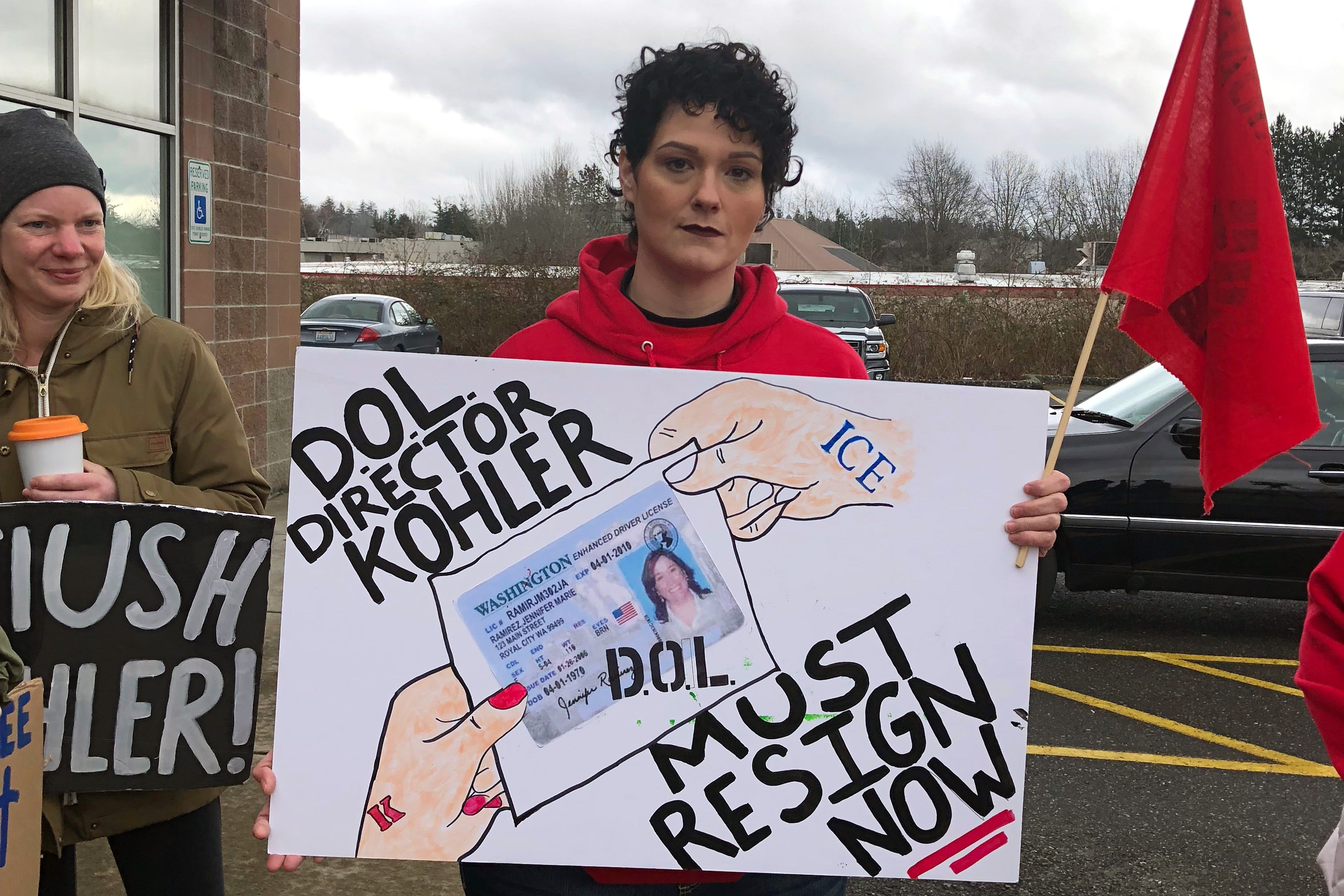 Cecilia Deleon protests in front of the Department of Licensing in Bellingham on Thursday, February 15, 2018.

BELLINGHAM — Nationally known immigrant-rights activist Maru Mora Villalpando, currently under threat of deportation, stood defiantly in front of the Department of Licensing in her hometown of Bellingham to call attention to the proof that the agency shared her personal information with U.S. Immigration and Customs Enforcement.

Villalpando on Thursday denounced the "willing collaboration the Department of Licensing has had with ICE for many years.”

As she spoke, about a dozen supporters held signs calling for the resignation of Pat Kohler, director of the Washington Department of Licensing. An email dated Dec. 7, 2017 shows the Department of Licensing sent ICE a copy of Villalpando’s application for a driver’s license, as well as a copy of her license. Exactly one week later, Villalpando, who first revealed she is undocumented in 2014, received a notice to appear in immigration court, a first step toward deportation.

Villalpando said she had long heard accounts of the Department of Licensing sharing information with ICE and had tried to warn Washington Gov. Jay Inslee, who in February 2017 signed an executive order saying the state did not want to “utilize state employees as agents of the federal immigration services.” But the concrete effects of the order were not particularly clear even at the time, with Inslee saying the order would not interfere with federal law enforcement.

“If it wasn’t because of investigative reporting, this would not been believed,” Villalpando said, referring to a recent Seattle Times story detailing the regular cooperation between DOL and ICE.

“It also makes us wonder how many other state agencies are collaborating with ICE,” she said.

Villalpando and other activists are calling for Gov. Inslee to appoint an independent council to ensure state agencies do not share information with immigration officials and to guarantee that there are consequences if they do.

Villalpando emphasized that in many instances the Department of Licensing was sharing information without a warrant and on residents with no prior convictions.

“DOL has been hiding behind supposed public-safety rhetoric,” Villalpando said. “But this case shows that they’re collaborating willingly regardless of having a warrant or not having a warrant.”

“I don’t have any criminal record. I’m their best example of a clear colloboration that has nothing to do with public safety,” Villalpando said.

“She kept saying, 'I feel awful, I feel awful,'” Villalpando said, recalling the conversation. “To me that's offensive. Because if anybody is feeling awful, it’s all these families that have been impacted.”

A deputy director has already resigned and in January, the agency announced it would stop requiring information about a person's place of birth.

In response to continued calls for her resignation, however, Kohler released a written statement, noting that she remained "deeply committed to implementing immediate changes and proper controls to ensure we are safeguarding our customers’ personal information."

"We are continuing to work with our stakeholders, immigrants’ rights groups and communities of color, as well as the Governor’s Office and the Office of the Attorney General to do a complete and thorough review of all data collection and sharing processes to make the necessary changes needed to protect all customer information."

Villalpando is one of several well-known activists recently targeted by ICE. ICE recently detained Ravi Ragbir, executive director of the New Sanctuary Coalition of New York City. ICE also picked up Eliseo Jurado, the husband of Ingrid Latorre, who is fighting deportation as she takes sanctuary in a Colorado church. Jean Montrevil, co-founder of the New Sanctuary Coalition, was also detained.

"The Constitution doesn’t say only for U.S. citizens, it says people. I’m a person. I’m a human being.”