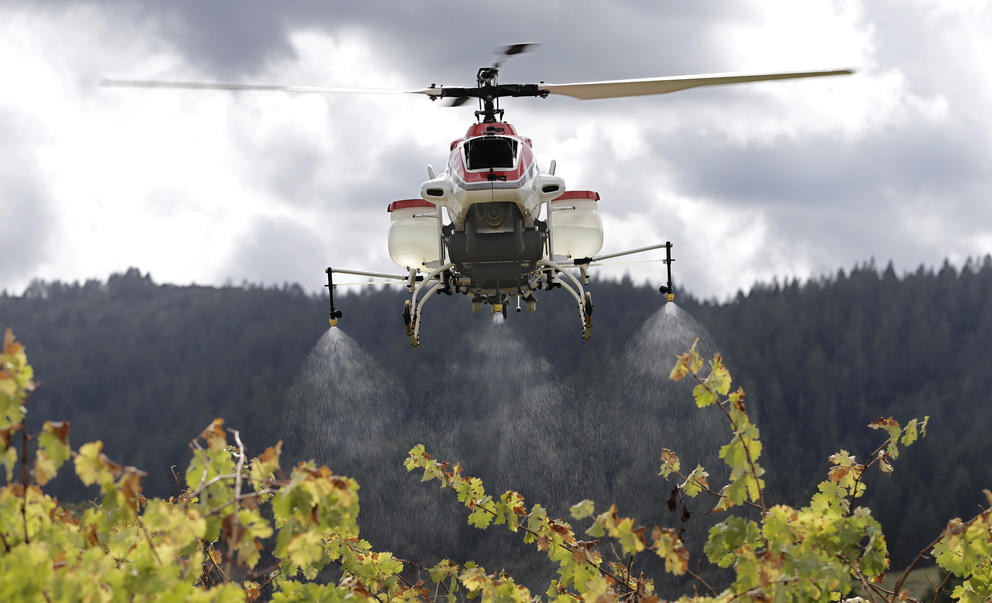 In this Oct. 15, 2014, photo, the Yamaha RMax unmanned helicopter sprays water over grapevines during a demonstration of it's aerial application capabilities at the University of California, Davis' Oakville Station test vineyard in Oakville, Calif. Credit: Rich Pedroncelli/AP

Late last year, the Environmental Protection Agency made the kind of announcement that, at any other time, would simply be routine: The federal agency is giving Washington state more than a half-million dollars to help ensure safe usage of pesticides.

Despite cutbacks in many environmental efforts, the amount is equivalent to monies received in past years and similar to programs that received funding in Alaska, Idaho and Oregon.

“We are pleased to support the pesticide programs in ensuring pesticides are used properly, agricultural workers are protected, and Washington's diverse agricultural landscape can thrive and remain a provider of safe, healthy food,” said EPA Administrator Scott Pruitt in a news release.

Farm worker advocates say they welcome efforts to strengthen state pesticide regulations, but warn that improved safety and health hinges on pesticide notification and reporting requirements. And they aren’t optimistic about improvements in the Trump administration’s Environmental Protection Agency.

Under Pruitt, the EPA has targeted more than 30 rules and regulations for rollback or elimination, significantly reduced enforcement of the Clean Water Act and Clean Air Act, and dropped requirements that oil and gas drillers collect and report data on emissions.

Many farmers, though, have welcomed some of the changes, especially a delay of 2015 EPA clean water regulations affecting farms along streams. The administration is expected to rewrite the water rules.

The administration also delayed until later this year the implementation of a new national rule on certification and training of workers applying pesticides. The National Association of State Departments of Agriculture, which represents agriculture departments across the country, said the one-year delay would allow states to implement the improved standards in a fashion that emphasizes education rather than enforcement.

Thousands of farm workers are responsible for harvesting Washington's agriculture. The diverse economy is led by the state's apple industry with 70 percent of U.S. production. Other major crops include potatoes, wheat, mint, cherries, hops and grapes. Like most conventional agriculture, growers employ an army of synthetic pesticides to stimulate their soil and control pests.

“Pesticides are necessary to protect our crops,” says Robin Schoen-Nessa, assistant director of the state Department of Agriculture’s pesticide management division. “If we want healthy apples and abundant veggies, we need pesticide tools.”

The division trains farm workers and growers in worker-protection requirements, says Schoen-Nessa. “Our program is probably the largest in the country,” she said. “We try to make sure farm workers know how to protect themselves and that growers are providing respirators and have protective gear for applicators in the field.”

Despite the training, pesticide drift — the spread of the chemical agents in the air — is a serious problem for workers, according to farm worker and legal advocates and state documents.

Most of farm workers’ exposure by drift comes from pesticide usage on neighboring farms, says Megan Dunn with the Northwest Center for Alternatives to Pesticides (NCAP). “We see a lot of accidents happening and health disparities for workers in our orchards.”

Washington has no requirement to report their use of pesticide, unlike Oregon and California, although farmers must make records of usage. “You have to keep the records, but you don't have to submit them,” says Dunn. “We don't know how many pesticides are used by growers, we don't know what kind are used, and we don't know where they're used.” In February of last year, a farm worker coalition, whose members and advisers include Columbia Legal Services and NCAP, released a report, Human Exposure to Pesticide Drift: Washington State. The report recommends the state create systems for neighbor notification of pesticide application, enforce buffer zones around pesticide spraying, and increase penalties for drift and overspray.

Schoen-Nessa acknowledges the state doesn't have a legal requirement to notify neighboring farms when crops or orchards will be sprayed. “But we get so few incidents,” she said, “our understanding is that most growers are notifying because the last thing they want is to expose workers or others off their property.”

In November, testimony before the state House Labor and Workforce Committee, the state Department of Health submitted a report documenting that pesticide drift or direct spraying was responsible for 426 of 536 incidents investigated between 2010 and 2016. The report, Acute Pesticide-Related Illness Among Farmworkers, concluded that key factors contributing to illness related to pesticide drift included a lack of advance communication and increased risk from air-blast sprayers and aerial drift applicators. And it concluded that proper training is essential.

With an average of 42,000 farm workers in the state the numbers may seem small. But each incident, says Eric Gonzalez, legislative and policy director with the Washington State Labor Council, may include hundreds of workers in a field. And he says pesticide exposure is under-reported because farm workers, many of whom are undocumented, fear they'll be deported or lose their income if they report incidents.

A bill introduced in the Washington Senate, SB 6529, sought to require farmers to provide notification to agricultural workers and the broader community, including schools and day care centers, four days prior to spraying. Testifying in favor were the Washington Education Association, Washington State Labor Council and Washington Environmental Council, among others. “We know that even when following the label and best practices, pesticides drift onto the environment and onto adjacent properties and schools,” says Megan Dunn of the Northwest Center for Alternatives to Pesticides.

Opponents of the bill, including the Washington Farm Bureau, warned that it would place unnecessary and unworkable restrictions on when farms can apply pesticides and called the legislation “an anti-farm pesticide bill.” In a hearing before the Senate Labor and Commerce Committee, the Washington Farm Bureau advocated for a two-hour notice instead of four days before applying pesticides.

Revised language, approved by a committee majority on Feb. 6, would set up a working group, headed by the leaders of the state departments of health and agriculture, to come up with a draft bill for next year’s Legislature to consider. The group’s task would include making recommendations on expanded notification of pesticide applications and providing records of applications to the state.

More than 400 pesticides are identified in illness reports by the Department of Health, both occupational and residential, from 2014 to 2016. Among them are organophoshates, a group of pesticides that can adversely affect nerve function, and chlorpyrifos. Residential uses of this dangerous pesticide, a neurotoxin, were outlawed 17 years ago, yet it is still widely used on staple foods like apples, wheat and corn.

Attorney General Bob Ferguson joined a federal lawsuit last year demanding that Pruit complete a scientific safety review of chlorpyrifos. In the motion, Ferguson and the states argue that by stopping the safety review, the EPA is allowing the use of chlorpyrifos to continue without determining that the pesticide is safe.

Another controversial but still widely used set of pesticides are neonicotinoids, or neonics. They've been shown to be toxic to bees and other insects, but not always consistently or across geographic boundaries. In its award to the Washington State Department of Agriculture, the EPA referred to programs that “provide outreach and training to ensure pollinators [such as bees] are protected from pesticide drift.”

The Northwest Coalition for Alternatives to Pesticides says that even when used properly, pesticides pose a health risk for farm workers and the general population. The coalition's Megan Dunn says, “about a third of pesticides on the market are carcinogenic and another third are endocrine disruptors.” She adds, “The reality is that many of us are exposed to multiple chemicals daily. We're ingesting pesticides in our foods, exposed to them in our homes, in parks.”

State Agriculture’s Schoen-Nessa says the department is well aware of concerns about pesticides but that the situation is improving. “We don't need those highly toxic products out there anymore like we used to,” she says. “We have newer chemistries that are much softer and less harmful for humans and for pollinators, birds and wildlife. That's what we want.”

Most states — including Washington — don't have the resources or agency infrastructure to conduct risk assessments on a regular basis, according to Emily Marquez with the Pesticide Action Network of North America. On occasion, the EPA conducts risk assessments for pesticides as it did with chlorpyrifos. While environmentalists complained that the agency had allowed advice from the U.S. Department of Agriculture to overrule EPA's own scientists and protect the pesticide, the EPA said Pruitt had relied on the best scientific advice from both inside his agency and the Agriculture Department.