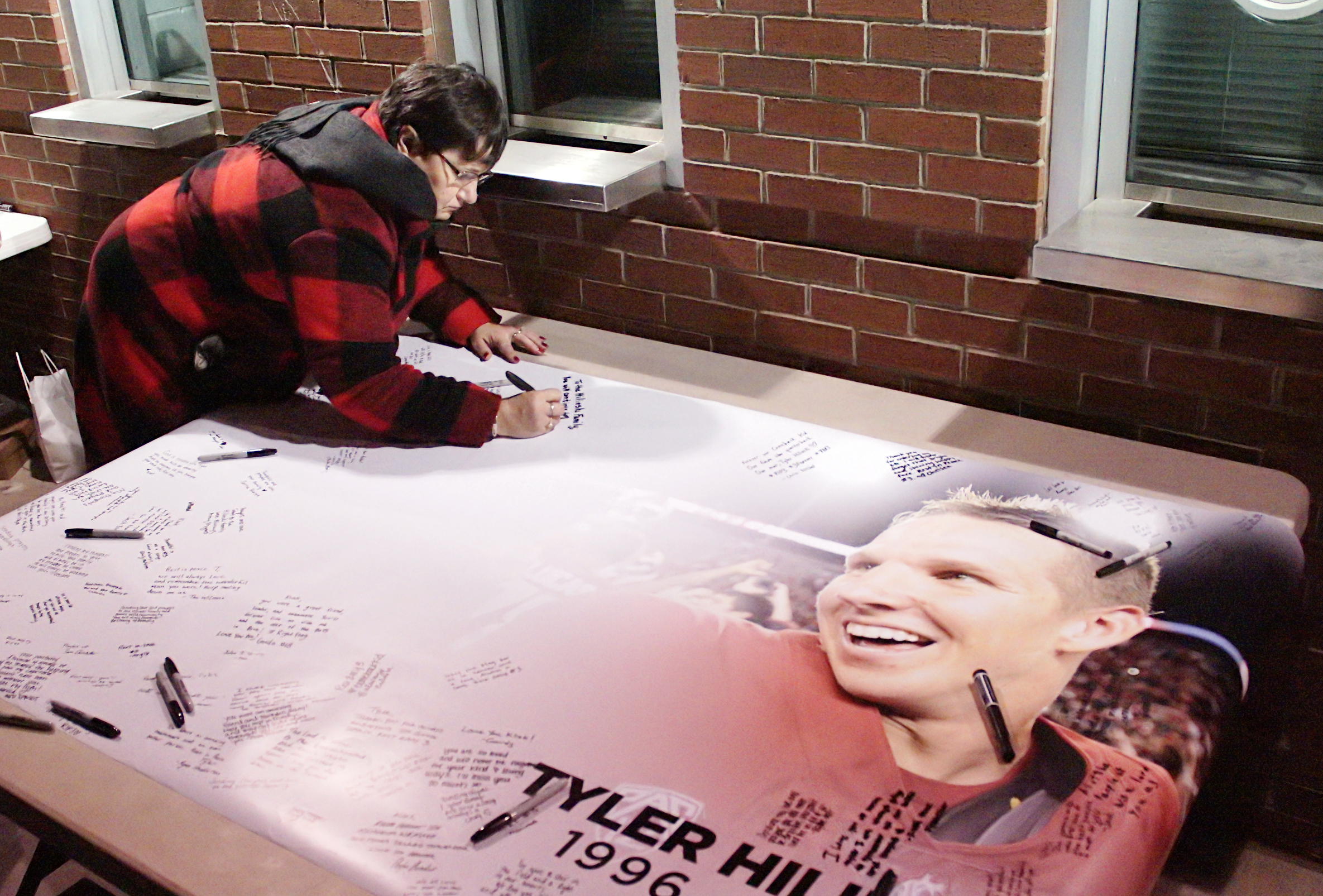 Tyler Hilinski’s mission was to keep everyone guessing. Was the Washington State University quarterback rolling out to pass, run, or handoff on a reverse? Was he bootlegging? Wait. Did he even have the ball? On the field, deception ruled, and he was good at it.

Off the field, too, it turns out.

The 21-year-old junior’s long-sought dream was about to come true as he worked out daily in anticipation of Spring football practice in March. That’s when Hilinski would step on the field as heir-apparent to Cougars record-setting quarterback Luke Falk, the Pac-12 conference’s all-time pass leader who is graduating and going pro.

A solidly built, perpetually smiling 6-4, 215 pounder, Hilinski was seen by family, friends and teammates as the epitome of the happy warrior. An unselfish and caring student-athlete, he loved football and seemed determined to join the pantheon of memorable Cougar QBs, including Jack Thompson, the 3rd pick in the 1979 NFL draft, Ryan Leaf, taken 2nd in the ’98 draft, and Drew Bledsoe, the top pick of the ’93 draft.

Hilinski’s most memorable game was last year against Boise State, stepping in for Falk after halftime. The Cougs trailed by as many as three touchdowns, then tied the game at the end of regulation. Hilinski and Wazzu went on to a jaw-dropping, triple-overtime, 47-44 comeback win. Having completed 25 of 33 passes that day for 240 yards and three touchdowns, Hilinski took it all in stride. “Shoot, I was just playing football out there,” he said afterwards.

He came from a close family in Claremont, east of Los Angeles near Pomona, where quarterbacking was part of the Hilinski DNA. His older brother Kelly 23, had quarterbacked teams at Weber State and younger brother Ryan is a standout high-school quarterback being wooed by a dozen universities including Utah, South Carolina, Northwestern and WSU. Ryan and Tyler, who talked on the phone almost daily, liked the novelty idea of a second Cougar QB named Hilinski arriving on the heels of Tyler’s departure, but Ryan still has a year to decide.

Tyler, said WSU Coach Mike Leach, “was one of those guys that would always come bouncing into the room and make everyone happy.”  Honestly, Leach added, “he was a very steady guy. Hadn’t really had any issues . . . [just the] ups and downs of a college student.”

Moving into a new apartment last month was an upper, or so it seemed to friends. After Hilinski dropped a buddy off at class early on Tuesday, Jan. 16 in Pullman, he went for a spirited run and then called some teammates to make plans to join them later in the day for lunch and a football workout.

Just another jam-packed day for the QB-in-waiting. Certainly, the last thing anyone suspected Tyler Hilinski might do that Tuesday is, say, pull out a gun and kill himself. But that is what he did.

After his run, he drove to his old apartment, which he was still in the process of moving from, and set a gun up in front of him. Days earlier he had taken, without permission, an assault-style rifle from a friend’s place.

He positioned himself directly in front of the gun, then, stretching to reach the trigger, fired a .233-caliber round into his head. A suicide note was nearby. Its contents have not been released.

Hilinski left behind a confounded and heartbroken crowd of admirers. Even the teammates who discovered him later that day didn’t believe what they saw. Suicide? Tyler? Within days, his name would come up at a public hearing in Olympia, used as an example of why more legislation and resources are needed for suicide prevention among teens and college students.

Among those in the dark about his mental health were friends who knew him best and even lived with him. “Man,” wrote a buddy early the next morning as the news broke and mourners flooded social media outlets, “first off I love you like a brother dude…you were always so happy go lucky and so much fun to be around. I’ll never forget the memories we made being roommates and experiences we had…you made me smile every day.”

There were many similar remembrances, effectively asking who Tyler really was and why 21 years was long enough for a life. No one — relatives, pals, teammates, parents Mark and Kym Hilinski — would say they saw any worrisome signs of depression. It was just the opposite, in fact.

Did his suicide note reveal a dark secret, perhaps? Apparently not. Pullman Police Chief Gary Jenkins said the note was among the evidence his officers collected in an attempt to determine a motive. But neither the note nor the rest of the death investigation could provide an answer, Jenkins said.

At Hilinski’s crowded La Verne, Calif. funeral Saturday, Jan. 27, about 1,000 attendees listened from chairs and bleachers in the gym of Damien High School – his father’s alma mater- as The Rev. Charles Ramirez tried to explain the inexplicable. In part, Ramirez said, Hilinski, who could muster sincere sympathy for others, had none for himself.

Whatever his demons, he didn’t talk about them. “The only thing that makes sense to us is Tyler was not well,” his aunt, Christine Hilinski, told the crowd, according to news reports. “He wasn’t able to make the choice [of seeking help]. He never would have deliberately hurt us.”

Jill Osur, a Cougar Family leader and mother of a WSU lineman, agreed. ”Tyler did not commit suicide. He died of suicide,” she said to the gathering. It wasn’t up to him. “The stigma of mental health has to be removed so we can help people get through this," the media quoted her.

Ex-WSU quarterback Falk was also among the attendees. He had spent the week practicing for that Saturday’s Senior Bowl, a showcase for college players seeking NFL contracts. Falk was stunned by his backup’s suicide and planned to wear Hilinski’s number, 3, during the game. Then he had second thoughts — which really mattered, his friend’s funeral or a football game? The next day he joined almost 300 athletes, students and coaches who flew to Southern California on WSU’s tab.

“At times, we feel like we can’t express our emotions because we’re in a masculine sport,” Falk said at a press conference before leaving Alabama. “Him being the quarterback, people look up to you as a leader and so he felt, probably, that he really couldn’t talk to anybody. So we’ve gotta change some of that stuff. We’ve gotta have resources and not have any more stigma about people going to them.”

Falk added: “He needs to be remembered. He was an amazing person, an amazing soul. This guy was one of the most outgoing, bubbly [people]… Just a guy you really want to be around, and people need to know it.”

According to state figures, high school and some college-age students are the most affected by the threat of suicide. It’s the second leading cause of death for Washington teens 15 to 19 years old, based on the 2016 Washington Healthy Youth Survey.  The Office of Superintendent of Public Instruction, among others, provides resources and support through its School Safety Center.

Actually, to help students, parents and others to learn more about depression and suicidal signals, Hilinkski's death may have a positive effect. Memorial events have been held at WSU, University of Washington and other schools where students burned candles and talked openly about the threat. At Oregon State, a student moved by Hilinski’s death set up a table in the gymnasium and invited basketball fans to sit down and chat about suicide. In the following weeks, social media users continued to debate what family and friends should look for, and do, if they sense a friend or loved one is on the edge.

Hilinski’s death could also affect legislation in Olympia, where suicide-related bills are pending in the House and Senate. Proposals include developing a statewide behavioral health and suicide prevention program for the state's post-secondary institutions, including the state’s 34 community and technical colleges, and enhancing services for students who are military veterans. Senate Bill 6514 notes that “almost half of military veterans who are enrolled in college have contemplated suicide at some point and twenty percent have planned to kill themselves.”

Kristi Haynes, a Tri-Cities suicide-prevention specialist who testified over the phone at a Jan. 30 public hearing by the Senate Education and Workforce Development committee, said Hilinski’s death was one of the reasons she called to support the bill.

“It got me thinking, ‘What if?’” she said. What if Hilinski’s teammates had been trained how to recognize suicide warning signs, what if Hilinski knew how to obtain mental-health services on campus, what if he felt secure enough to take an advantage of them?

“What if the university had a culture where students felt like they could reach out for help,” and help others. All are lessons we can learn, she added. “There’s such a great need for it.”

Coach Leach, chatting with the media a few days after the suicide, said his last conversation with Hilinski was a phone call after the Cougars’ Holiday Bowl loss Dec. 30 to Michigan State. Hilinski, who completed 35 of 50 passes for two touchdowns, went home to Claremont, looking forward to his starting role next season.

“He was back with his family,” Leach said. “They ended up taking a trip to Cabo. [He] just generally [chatted] about moving forward and having a great off-season; building and developing for next year.” He presumably did not know he’d just played his last game.