What if the teacher who hated you was carrying a gun?

School discipline might be more dangerous if teachers are weaponized. 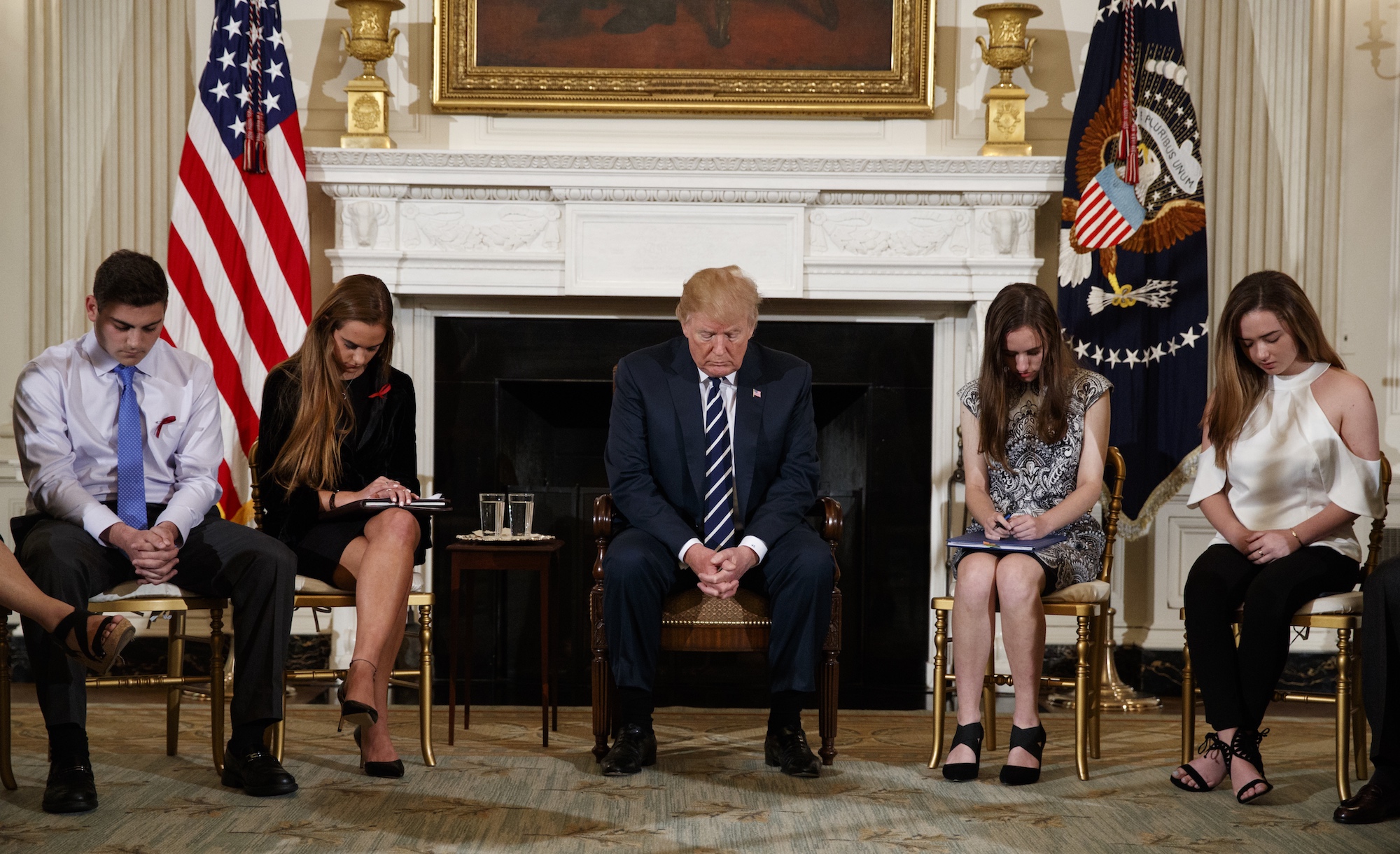 President Donald Trump and students from Marjory Stoneman Douglas High School in Parkland, Florida, bow their heads during the opening prayer before a listening session in the White House, where he suggested arming teachers to improve school safety. (Photo Carolyn Kaster/AP)

The idea of arming teachers alarms me. Turning our schools into armed camps is dangerous and, on so many levels, sick. The focus should be on getting society on a track where guns on school grounds are unthinkable in anyone’s hands.

My biggest concern, however, stems from my own experience with teachers. I’ve had very few who would even want to carry a gun. But I have had numerous teachers and have seen enough difficult classroom circumstances that I fear for student safety if teachers are weaponized.

The weapons in the old days were simple. I attended Seattle public schools where wooden paddles were wielded against miscreants. There was a teacher at my grade school in south Seattle who would have bad boys rest the side of their heads on the blackboard’s chalk trays until their neck muscles stiffened so much they walked home with their ears leaning on their shoulder.

Our elementary school principal, known as Iron Pants, loved ritual humiliation. She forced the unruly or mischievous, or sometimes the wholly innocent, to trail around behind her in a long, snaking conga line — a kind of chain gang without chains. The only thing I thought she nurtured was resentment.

And then there was Mrs. S., a jowly tyrant who enforced non-existent rules. She loved to pick on boys. One time she “caught” me returning to the classroom during lunch hour at my teacher’s request only to grab my face in a vice-like grip — she had the claw power of a king crab. With her grip, she could almost pick you off the floor and ensure you had no means of speaking back as your two cheeks were squeezed so they met in the middle of your face. She berated you, called you names. If she’d had a gun, I think pistol-whippings might have become her forte.

In junior high school on Beacon Hill, there was poor discipline and chaos at times. Teachers felt like they were in a war zone — but the worst weapon was a thrown chair or swats in the vice principal’s office.

There was also an obvious racial disparity in how punishment was doled out at this school. African-American students, especially males, were targeted. Boys were swatted with heavy wooden paddles. Racial tensions were high — I can only imagine what guns would have done. Black students are and have historically been disciplined, punished and expelled disproportionately.

We have a history of bias in police shootings — I wager we would see it in teacher shootings of students too.

While I was at that junior high, I was cornered in a storage closet and manhandled by a teacher in a sexually suggestive way. He pinned me in a dark corner and started to massage my neck and asked me not to drop his class.

Would I have felt like I could push back and escape, which I did, if he’d been carrying a gun?

Like many adolescents, I never said a word to anyone about what happened.

I saw lots of things at that school, including acts of violence by teachers. I remember one where the most patient, gentle-seeming teacher went ballistic in class and literally threw a student across the hallway so that he bounced off the lockers on the opposite side. This was after bouncing him off a wall and a doorway.

The kid was a jerk. Still, arming such teachers might escalate such incidents into extremely tragic ones. If we armed teachers, instead of “going postal” we might have a new term, “going teacher.”

In schools, the daily tensions — between teachers, students, administrators, staff and parents; between rebellion, compliance and authority; between innocents and predators — is bad enough. It doesn’t need more bullets.

In my sophomore year of high school, I attended a private school on the Eastside. It was a new school and there was tumult over its direction. A very popular Humanities teacher left early that academic year and formed his own alternative school, and a number of students left with him.

Stuck in mid-year and missing a teacher, the school hired a temporary one, whom I’ll call Mr. SS, to fill in. His short-cropped military hair and his dark, dead eyes seemed ominous enough, but it was worse. He had been a mercenary in Africa and his views were far, far right. He discussed them often and at length in class. How far right were they? He wore — I kid you not — Nazi SS skull rings to class. Not reproductions. He told us his sympathies were with Germany.

In front of boys and girls, he was incredibly sexist and described sex in crude, misogynistic ways. He called students names. There was one kid in class he routinely excoriated and bullied constantly. “You are nothing but a piece of meat,” he’d say to the student.

He collected weapons. He showed us a Nazi SS dagger in class — not show-and-tell, but “look what I have in my desk.”

We were lucky he didn’t have a burp gun. Given the level of his vitriol and darkness, I’m not sure “Piece of Meat” would have made it to the end of the term.

We complained to the headmaster, to other teachers, to our parents. We begged for Mr. SS to be fired. The school did not act, instead allowing him to finish the academic year. It was cruel and miserable. I left the school as a result.

I am not anti-gun. I am a gun owner myself. I have had guns for recreation, and protection. I support gun ownership, but also much stronger gun-control measures. We need to recommit to a national culture that thrives without the use, and flood, of arms, as so many other modern countries do.

Our public schools are imperfect institutions: Making them better, more nurturing, more equitable and more empowering should be the focus.

Turning the Mrs. S’s and the Mr. SS’s and others teachers into armed guards, I predict, will wind up harming more students than it saves.