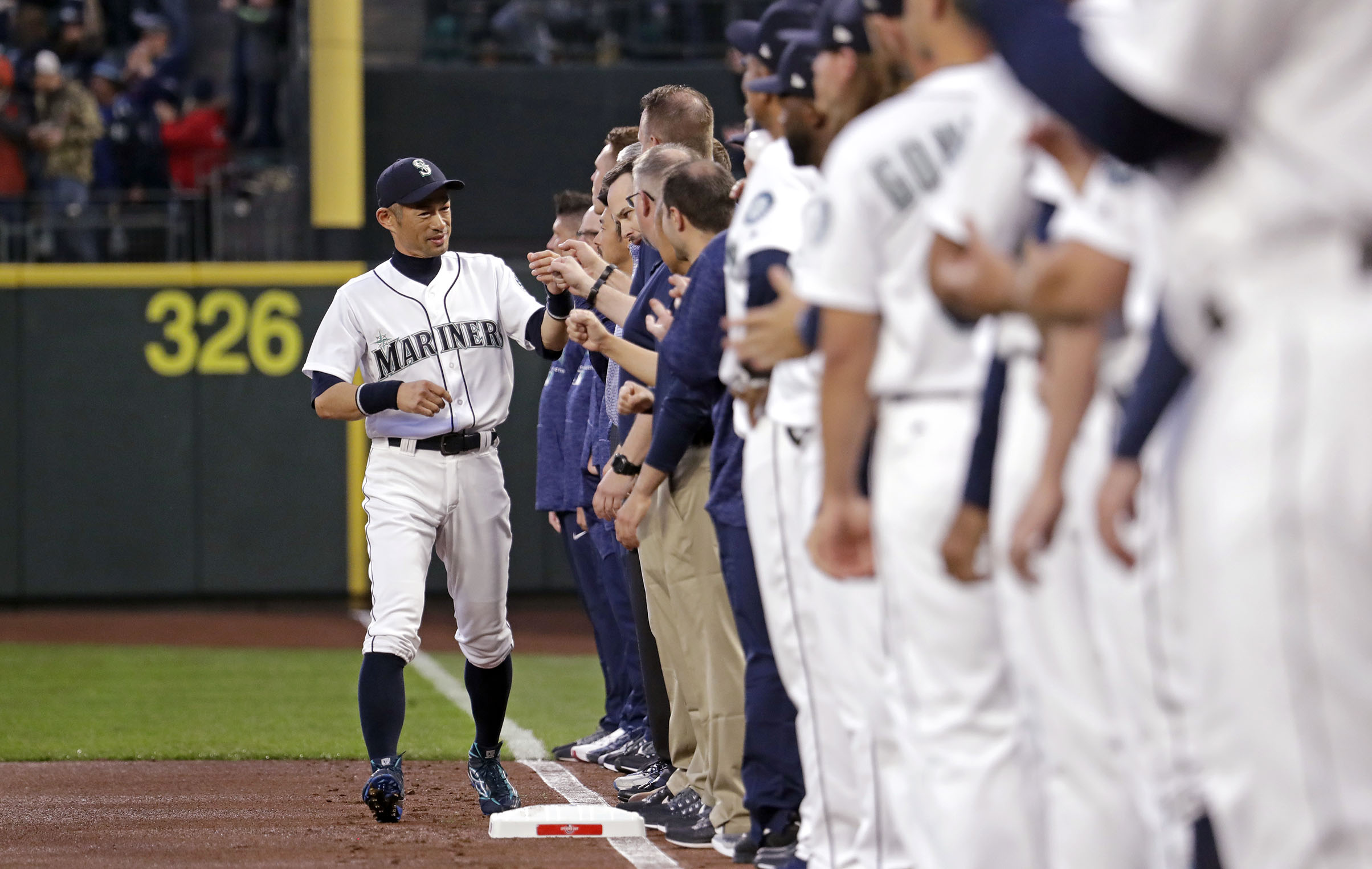 Seattle Mariners' Ichiro Suzuki, left, greets teammates as he is introduced before the team's opening day baseball game against the Cleveland Indians Thursday, March 29, 2018, in Seattle. (Photo by Elaine Thompson/AP)

It sure beats driving away in the middle of night while telling no one, as did Ken Griffey Jr. did in 2010, ending unceremoniously his second tour of duty with the Mariners. But it was definitely not as poignant and dramatic as Marshawn Lynch tweeting a photo of his cleats hanging from a wire during the fourth quarter of the Super Bowl in 2016, symbolizing his retirement from the Seahawks (but not, as it turns out, from football).

Exits for sports icons are hard. Athletes rarely want to admit it's time. Most fans, at least those more sentimental than pragmatic, are even more resistant.

The awkwardness of stepping back from playing was compounded for Ichiro, who comes from a people who are widely perceived to regard the saving of face as a cultural imperative.

What the Seattle Mariners did Thursday was their best attempt at saving of face for a legend who could no longer play at the level to which he was accustomed. He had nine singles in 44 at-bats (.205 average) and had some trouble tracking fly balls.

To cut him as they would any other unproductive veteran was undignified. Sending him down to the minors was even more unconscionable. And anyone who read the profile in March done by Wright Thompson in ESPN The Magazine, which would have to include every staffer in the Mariners' front office, would be at least slightly fearful for his welfare were he to be disconnected completely from Major League Baseball. As much as any athlete I have known, Ichiro's identity is almost completely wrapped in his obsession for his sport.

Since nothing in Thursday's announcement mentioned retirement, the Mariners made up a job in order to help him make a transition to ... whatever.

Ichiro's agent, John Boggs, campaigned for months to get Ichiro hired by the Mariners. They did so March 7 because of spring training injuries to their regular outfielders. But the youngsters are healthy now, and there is no roster room for Ichiro, which is not the same as the dreaded R-word. Boggs told The Athletic, “He is not retiring. He’s taking on a different role for 2018, and 2019 has yet to evolve.”

Ichiro is now a special assistant to Mariners chairman John Stanton, whatever that may mean. General Manager Jerry Dipoto said in a statement that the change was about the club's desire to "capture all of the value that Ichiro brings to this team off the field."

But they already have coaches for every position and task, and a clubhouse full of veteran leaders. Said Dipoto: "While it will evolve over time, the key is that Ichiro’s presence in our clubhouse and with our players and staff improves our opportunity to win games."

Well, maybe. In his first tour with the Mariners from 2001 to 2012, when he made a compelling argument for his future entry into the Baseball Hall of Fame on the first ballot, Ichiro seemed more of an independent contractor than a card-playing, towel-snapping member of the team.

Time changes things, of course. This 44-year-old version of Ichiro is more affable and more tolerant of the U.S. players' penchant to take the game, at least in part, as amusement and not obsession.

"I've always been strict with myself," he told me March 28, the day before the season opener. "In my early years, I was also strict with my teammates. I wanted them to do it this way or that way.

"Now, some of these guys could be my kid's age. I look at them and don't let anything really bother me. I just kind of enjoy it now, actually, and how they do things."

Apparently, this group of "kids" is enjoying the less over-wrought iteration of Ee-chee.

In fact, Dipoto, meeting media at Safeco field at mid-afternoon Thursday, likened Ichiro to the Dalai Lama, describing how on team flights young players surround him at his seat.

"It's almost like they're waiting for him to opine from the mountaintop," he said.

For a team whose cap symbol is a trident from Greek mythology, I guess it's better to substitute the Oracle at Delphi. But when a team is 16 years gone from the playoffs, no myth, talisman, parable or incantation is beyond consideration.

Dipoto had never met Ichiro until he arrived at spring training in Arizona to join the team.

"He had more presence than any other baseball player I've ever encountered, and I've been in the game close to 30 years," he said. "I've never met one quite like Ichiro.

"To keep him part of the organization is critical. The Mariners and Ichiro are linked together into perpetuity."

What that linkage looks like, on its first day, is a mystery. I've never heard or read of Ichiro addressing a post-playing career. Nor was it a topic Thursday because Dipoto went out of his way at a press conference to say that that no decision has been made about Ichiro returning to play in 2019.

The Mariners open the 2019 regular season in Tokyo with two games against Oakland. No one would be surprised to see Ichiro in a Mariners uniform.

A source with knowledge of Mariners ownership said that Nintendo of America, which has a 10 percent stake, urged the hiring of Ichiro, and wanted it to last the entire season. The Redmond-based video game giant was the team's majority owner until selling most of its shares to minority owners led by Stanton in January 2016.

Nintendo's roots in Japan and in saving baseball here with the 1992 purchase by CEO Hiroshi Yamauchi are reminders that Ichiro was Japan's first personality to become a global pop-culture star. To Japan, he is more than a baseball player. His denouement is a matter of national esteem.

But to many Seattle baseball fans long removed from success, the indulging of an aging Ichiro was representative of the previous regime's habit of pandering to the past. He was taking away space from a potentially more helpful youngster.

Finally, Dipoto, Manager Scott Servais and other baseball people prevailed, likely emphasizing that an improving club can't be taken seriously if a player is kept beyond his expiration date.

"This," Dipoto said, "was a decision made in the best interests of winning games now."

That argument was perhaps a threat to the Japanese imperative of saving face, as explained by Rochelle Kopp, managing principal from Japan Intercultural Consulting, in a 2010 essay: "The desire to avoid causing loss of face for oneself, one’s organization, or for others can be said to be the motivation behind many things that Japanese organizations do that are puzzling to Americans. ...

"The instinct to preserve face is something so ingrained in Japanese culture that many Japanese are not aware that it influences their behavior. It’s not something that Japanese often talk about – it’s just that when it comes to the realm of face, the warning bells automatically start to flash."

The Mariners saw the flash and devised an exit ramp, equal parts grace and awkwardness, for Ichiro to stay in the game without playing the game. Where it goes is the guess of anyone, including Ichiro, but the notion of the primacy of winning had a good day in Seattle Thursday.