Issaquah trail advocates are taking their last chances to save land there from development. 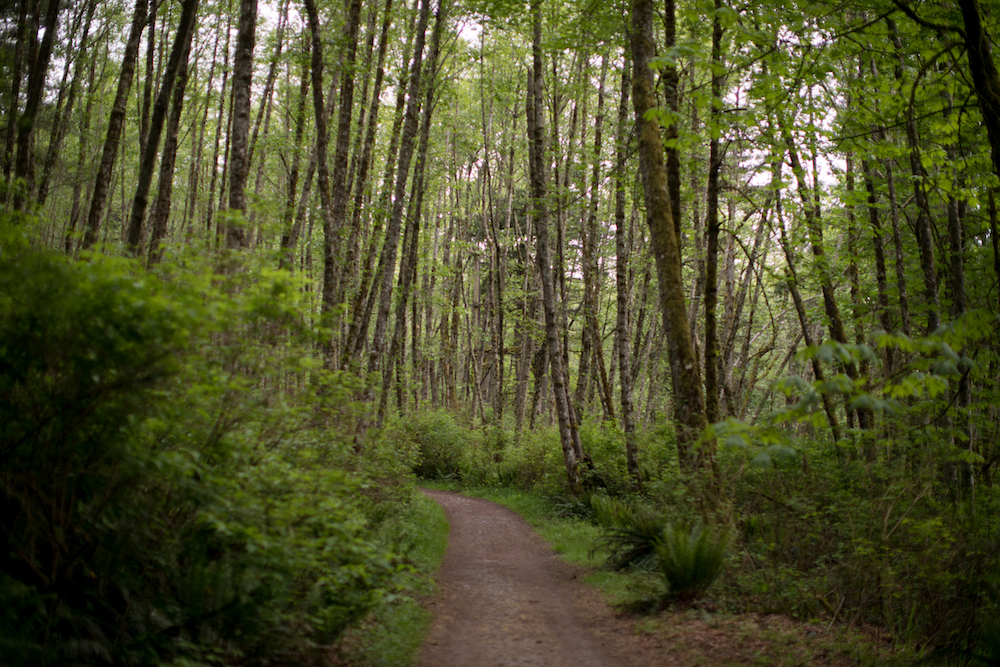 The view on a trail at Cougar Mountain in Issaquah (Photo by Matt M. McKnight)

A thick forest of alder, fir, fern and devil’s club blankets the slope on the northeast corner of Issaquah’s Cougar Mountain. The 46-acre greenbelt blends seamlessly into Cougar Mountain park, the first taste of the Cascade foothills for hikers escaping Seattle and the Eastside suburbs.

But those acres above Newport Way Northwest are private land at the center of a years-long development fight, one that could end with a new subdivision rising between state Route 900 and the Cougar Mountain Zoo.

Kirkland-based Windward Real Estate Services wants to build 57 houses there, as well as a new road. Neighbors and long-time trails advocates calling themselves Save Cougar Mountain say the land is too environmentally sensitive for development and should be protected.

An Issaquah hearing examiner will soon decide whether building can begin on the development. In the meantime, the Trust for Public Land, a conservation nonprofit, is leading negotiations between the developer, the neighborhood group and the city of Issaquah in a last effort to protect the land.

The fight echoes the consequential parks battles of the 1970s and ‘80s when activists convinced King County leaders to protect Cougar Mountain. It also demonstrates the heightened friction between growth and conservation in the booming Puget Sound region.

The contested acreage is sandwiched between Talus — an “urban village” development that includes about 1,000 houses, townhomes and apartments, as well as businesses — to the south and a smaller neighborhood to the northwest. The proposed site is owned by the Bergsma family, longtime Issaquah residents who once ran the town dairy. Windward has an agreement with the Bergsmas to buy their land and has purchased a smaller adjacent parcel from another family.

The properties connect to the 3,115-acre Cougar Mountain Regional Wildland Park. Cougar Mountain is one of the “Issaquah Alps,” which include Squak and Tiger mountains. Cougar is home to birds, bears and bobcats, and serves as a popular destination for hikers and runners.

In 2015, Windward submitted its first proposal to build 78 houses serviced by a road connecting Newport Way to Talus.

Windward President Jim Tosti said there will be no trouble finding buyers in the housing-hungry Seattle metro area. "Developers don’t create markets. We respond to markets. The demand [for housing] in this region is huge and the supply in this region is small,” he said.

Spurred on by the fear that the new road would turn Talus’ streets into a bypass for drivers hoping to avoid traffic on SR 900, a group of neighbors formed Save Cougar.

“Our roads are relatively narrow,” said Julie Clark, a Save Cougar member and Talus resident. “Hundreds of cars a day going through small residential roads didn’t seem like a good fit.”

Because Windward’s original proposal was to build more densely than Issaquah zoning would allow, the developer needed special city council approval. The council decided the community benefits of the project did not outweigh its impact and landslide risk, and unanimously rejected it in June.

Later in the year, Windward returned with a scaled-back proposal to build 57 houses, one that meets Issaquah’s land use codes and no longer requires council approval. It still must pass an environmental review that includes analysis of impacts to wetlands, streams and steep slopes.

Through the process, Save Cougar’s message evolved and they partnered with the Issaquah Alps Trail Club, an organization formed more than 40 years ago to protect the foothills, and the Mountains to Sound Greenway Trust, which stewards open space along the Interstate 90 corridor between Seattle and Ellensburg.

“We realized the importance of this forested area,” Save Cougar founder Susan Neville said. “We’ve all walked these trails. The fact that it butts right up against Cougar Mountain, the fact that there’s trails that go right over, the more we learned about it, the more we said, ‘This can’t happen.’”

Tosti says he is open to selling the land to conservation groups and that he has offered it to them below market price. Trust for Public Land project manager Richard Corff confirmed the negotiations with Windward but did not offer details. Issaquah Parks & Recreation Director Jeff Watling said his department is collaborating with the land trust; if the property is conserved, his department would likely manage it as a park. But that remains a big if.

The developer has pitched the revised proposal as a win-win that provides housing while protecting some forest. Engineers hired by Windward contend landslide and pollution risks on the property can be addressed with retaining walls and a stormwater management system.

“Every project requires some form of mitigation,” Tosti said. “There’s no environmental risk on this whatsoever. We’re not building on any critical areas. … We will be building per city of Issaquah code and any of the state mandated codes. Period.”

But the city’s review of Windward’s engineering report raised concerns that the developer’s experts underestimated the landslide risk and didn’t thoroughly map the streams and springs on the site.

Save Cougar points to that city review and nearby landslides, including one above the Talus development in 2015, that developers and the city are still fixing.

For Issaquah Alps Trails Club member and former-Issaquah City Councilmember David Kappler, it is not just the slide risk and wetlands impact, though he says those concern him. It’s about Cougar Mountain’s popularity and the possibility of expanding easy access to the park from Issaquah’s transit hub.

“We can never build enough trailhead parking or trailheads to meet the demand we’ll have for the whole Mountains to Sound corridor here,” he explained. “Cougar is just so important for introduction and access to the mountains.”

Kappler says the Save Cougar effort feels like a continuation of the work he and the Issaquah Alps Trail Club started more than 40 years ago.

Beginning in the 1950s, the top of Cougar Mountain — until then best known for its coal mines — was transformed into a military installation. It hosted anti-aircraft guns, then a radar station for the U.S. Army’s Nike Ajax surface-to-air missile system. By 1967, the Nike technology was obsolete and the Army gave the 17-acre site to King County, which converted it into a small public park.

The rest of the mountain was a patchwork of privately-owned forest that hikers began to explore in the years after the Army left. Trails on Cougar, Squak, Tiger, Rattlesnake Mountain and other foothills began to appear in guidebooks, many written by author and conservationist Harvey Manning.

It was Manning who dubbed the hills the Issaquah Alps, a branding effort meant to capture the public’s heart. He and his cohort – who by 1979 had officially formed the Issaquah Alps Trail Club – began leading awareness hikes, writing newspaper articles and lobbying elected officials for a wildland park.

Their efforts began to pay off. Seattle Mayor Charles Royer and King County Executive Randy Revelle pledged support, as did Larry Phillips, an aide to Revelle at the time who went on to serve on the King County Council.

King County created a citizens committee to develop a countywide land plan that would, among other things, determine the fate of Cougar. Two members of the trail club, Kappler and Buz Moore, were on the committee.

Ironically, the trail club’s efforts to generate buzz about Cougar drew the attention of would-be developers. In the forward to The Authoritative Guide to the Hiking Trails of Cougar Mountain, Manning described a 1980 meeting pitching the park. After Manning presented his vision, the head of the Central Newcastle Property Owners Association came up to him and said, “We owe you a debt of gratitude. You’ve showed us how to merchandise Cougar Mountain.”

Their vision was to build “Villages in the Park,” comprised of housing, roads and shops built on the mountain with slices of nature interspersed.

“My name for it was ‘Villages in Lieu of a Park,’” Kappler told me.

The committee split between the wildland park plan and the proposed development. The trail club rallied environmental and civic groups along with area residents behind their vision. The coalition prevailed and, on June 5, 1983, then-County Executive Revelle created the Cougar Mountain Regional Wildland Park.

Development pressure continued, but so did the work of activists. King County steadily acquired 1,500 more acres for the park from railroad companies, other public agencies and private owners, nearly doubling its size.

Whether the Bergsma property gets developed or protected, the rest of Cougar park will remain. But the fight surrounding the family’s land typifies the challenge of conserving open space near the region’s urban areas, and the difficulty in balancing the seemingly endless demand for housing with the need for parks to serve the growing population.

Released in February, the Puget Sound Regional Council’s draft Regional Open Space Conservation Plan mapped the remaining open space in King, Snohomish and Pierce counties. According to that analysis, the region has about 2.8 million acres of open space, including forests, farms, waterbodies and urban parks. About 448,000 acres are considered at-risk of development.

By identifying conservation areas, the region’s local governments can better steer growth, explained Erika Harris, a senior planner with the tri-county council. She says, “We’re facing a lot of development pressure. But it doesn’t have to be a negative thing if we do it in a thoughtful way.”

“In a lot of ways growth and open space are complementary,” Harris continued. “If we can develop in more of a compact manner, we can preserve that open space.”

Many conservationists promote the concept of dense development in urban cores surrounded by protected open spaces. It is a philosophy the city of Issaquah supports, at least in theory.

A 2012 plan for growth in the suburb called for exactly that — dense, mixed-use development near the city center to grow the city without sprawl. But the Save Cougar group argues that city code has not caught up to those aspirations, which is why Windward may build on the Bergsma property.

Tosti said cities need to do more to allow the urban density they claim to want.

“These cities go out and pay lip service to it,” the developer said. “They bring in lots of new companies and new employees, but don’t rezone downtown properties.”

For Kappler, conservation is the only logical outcome for the Bergsma property.

“With this one, the environment and location has so much more in value than additional housing.”