What happened when a mega-farm promised to be eco-friendly 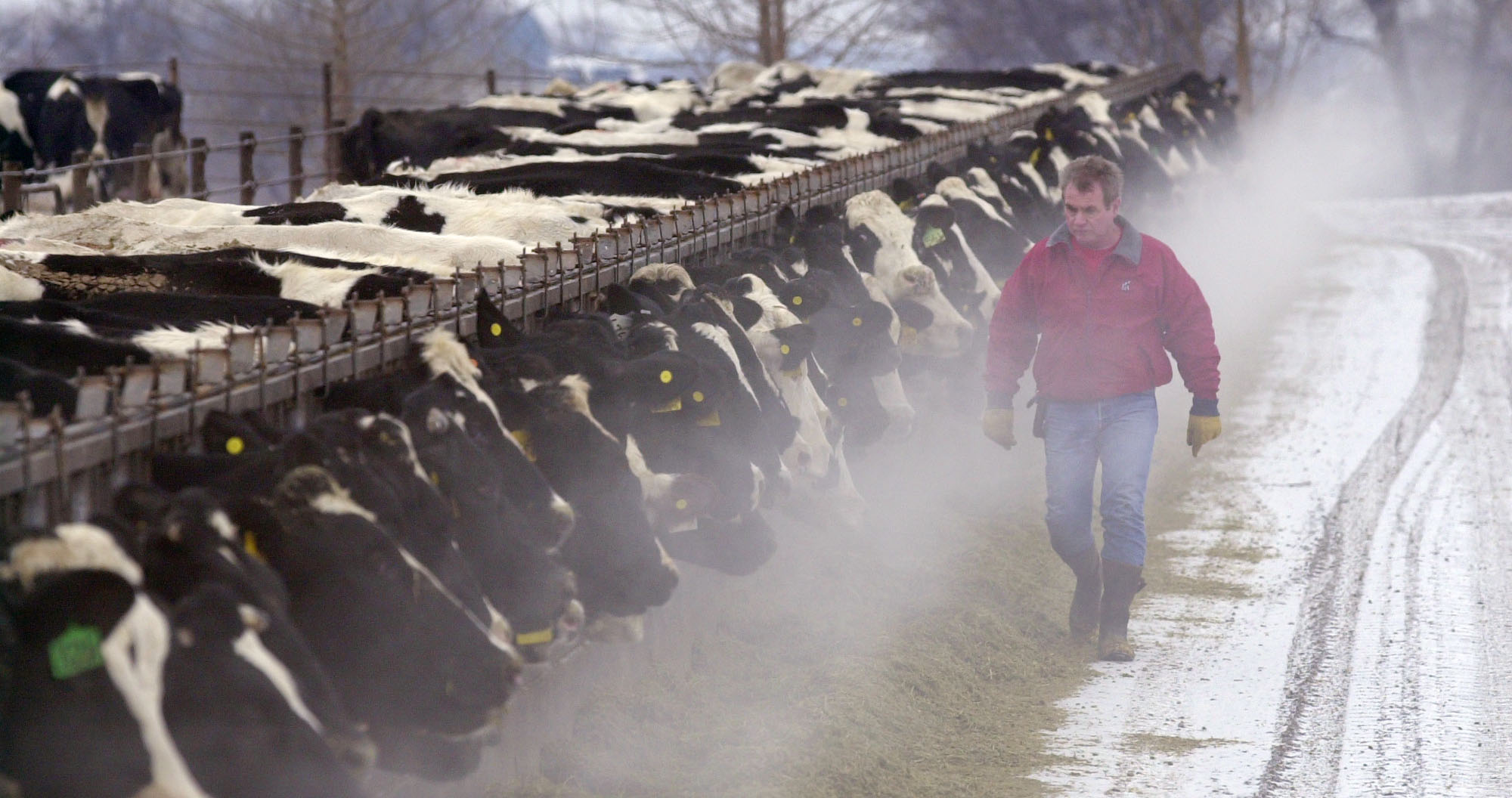 Dairy farmer John Prins walks past one of his herds, who leave a cloud of steam from breathing in the cold air, Saturday, Dec. 27, 2003, in Granger, Wash. (AP Photo/Elaine Thompson)

One of the Northwest’s largest dairies has faced some big troubles in its first year of operation. The rise and rapid fall of Lost Valley Farm has deeply frustrated environmentalists and has shocked neighboring farms and fellow dairy operators.

The dairy had come into the Columbia Basin promising jobs to surrounding rural communities and responsible environmental stewardship for its proposed 30,000-cow operation in Boardman, Oregon.

It failed on those promises, fast.

“You couldn’t have made this situation up if you wanted to,” said Chad Allen, a Tillamook dairy operator and the president of the Oregon Dairy Farmers Association.

Critics of Lost Valley Farm and other large farming operations sounded the alert early over industrial-scale pollution and threats to public health, yet they have not been enough to completely shut down Lost Valley Farm. Opponents tried to put a halt to Lost Valley before the dairy ever started milking cows. Turns out, there was something to those warnings.

“We had concerns from the outset when we first heard about (the Lost Valley Farm) proposal, and those concerns largely fell on deaf ears,” said Lauren Goldberg, staff attorney with the environmental group Columbia Riverkeeper.

Lost Valley Farm’s rapid and spectacular fall has served to reinforce critics’ depictions of concentrated animal feeding operations — or CAFOs — which are part of a national trend in agriculture.

Rise Of The Mega-Farms

Farming has been shifting for decades from smaller family farms to mega-scale industrial operations. The massive volumes of animal excrement, climate-warming methane gas and airborne pollution from these so-called factory farms have drawn the scrutiny from environmental groups and neighboring communities.

Most of the problems at Lost Valley were caused by improper storage of manure and other waste. Manure spilled over the tops of lagoons or leaked from conveyance pipes transporting wet waste from the milking facility to lagoons; manure was stored in the wrong spots.

“They consistently had issues — whether they were unable or unwilling (to fix problems), I can’t really speak to that,” said Alexis Taylor, director of the Oregon Department of Agriculture.

Taylor said the dairy also did not report problems within 24 hours of their occurrence.

The state eventually took te Velde to court to essentially stop production at Lost Valley Farm. It was an extremely rare move on the Department of Agriculture’s part. They reached a strict settlement, but the dairy has continued to violate its permits.

When it comes to Lost Valley Farm’s record of violations, its volume and severity stands out among farm operations in the Northwest. Not only has it failed numerous inspections and been tagged with at least seven citations — but the Boardman operation was also hit with a $10,640 civil penalty and taken to court, all while it is still producing milk.

By contrast, fewer than 1 percent of her department’s 880 inspections in 2017 of concentrated animal feeding operations in the state resulted in violations that lead to civil penalties or other injunctive relief, Taylor said.

Not The First Time

Other Northwest communities have also seen pollution pile up from mega-dairies. In a groundbreaking case in Washington, a handful of dairies in the Yakima Valley were sued by environmental groups in 2013 after an Environmental Protection Agency study linked them to elevated nitrates in nearby drinking wells. Excessive nitrates in drinking water can cause health problems for senior citizens, young children and people with immune issues.

After a lengthy legal battle, the Yakima Valley dairies had to provide other sources of drinking water for their neighbors and follow a strict cleanup plan — they contended it went further than state and federal standards.

Washington’s Yakima County has the most dairy cows in the state — about 98,000 mature cows, according to the Department of Agriculture. Milk is Washington’s second-ranking commodity, bringing in $1.1 billion as of 2016.

Since 2017, Washington has required all dairies with more than 200 cows to follow stricter water quality standards.

Lost Valley Farm’s manure spills were all in an area where groundwater supplies are limited and already inundated with nitrates. Too much manure can elevate nitrates’ potential to reach groundwater.

“It’s been an issue that we’ve been working through for over 20 years now,” said Aaron Madison, a fourth-generation farmer whose Eastern Oregon operation is about 14 miles east of Lost Valley Farm.

Since learning in the early 1990s that the area had a problem with nitrates contaminating its drinking water, Madison’s family has worked to reduce runoff from their farm, continuously updating irrigation equipment and soil monitors. A lot of it makes economic sense, Madison said, but he also wants to be a good steward of the land.

“We don’t want to have a legacy of negative environmental benefit. We’d rather be proactive and manage our resources as efficiently and effectively as possible,” Madison said.

"That’s why it’s frustrating," he said, to have another farm nearby is violating its groundwater permits in an area that's  still got a long way to go until its nitrate levels improve.

For its part, the Department of Agriculture said the 11 groundwater monitoring wells around Lost Valley Farm have not shown “any environmental impacts.”

“We would say it’s one of the most extensive monitoring in place for any (concentrated animal feeding operation) in the state,” said Taylor, the Oregon Department of Agriculture director.

Groups opposed to the dairy question whether Lost Valley Farm’s violations haven’t affected groundwater. Ivan Maluski is with Friends of Family Farmers — the group has fought the permitting of Lost Valley Farm since the beginning.

“ODA is trying to split hairs here. They’re saying, ‘We’ve observed these serious violations. They’re so severe that we took the operation to court. But we didn’t detect any pollution getting into the groundwater,’” Maluski said. “I’m suggesting that’s because their monitoring isn’t set up to tell them what they’re looking for.”

In other words, Maluski said, the groundwater monitoring wells are testing fields where the dairy used manure as fertilizer, not where the lagoons and pipes are overflowing and leaking. The Oregon Department of Agriculture said the lagoons at Lost Valley Farm have a separate leak detection system.

A nearby dairy has also questioned whether there is enough water for Lost Valley Farm — something opposition groups also claim. They said Lost Valley Farm did not have a big enough source of permanent water when its initial permits were granted.

Lost Valley Farm has searched for a number of options to get enough water, most recently asking to transfer water rights from another nearby farm. Opponents are concerned that the dairy wants to use water in different ways than the neighboring farm, which could drain water from the area’s critical aquifer.

That’s too many problems for one large dairy, said Ivan Maluski.

“You have to ask the question why and what needs to be changed in order to make sure that can’t happen again,” Maluski said.

He wants mega-dairies like Lost Valley Farm to go through a different permitting system than other CAFOs. Currently, the “large permit” is for a herd of 700 cows or more. Lost Valley Farm has had more than 10,000 cows.

Oregon Department of Agriculture Director Taylor said the system worked — the permits stopped pollution before it got too bad.

“The CAFO permit itself is environmentally protective. The permit has not been followed, and that’s really the problem,” Taylor said.

Dairyman Chad Allen discounts the notion that Lost Valley Farm’s problems are a consequence of its size and scale. He said it’s just one poorly managed operation — something that can and should be resolved.

“It wasn’t that the farm failed. It was that the management that failed,” Allen said. “Chances are somebody else will come along in time, will acquire the assets of this operation, and be quite successful.”

“It should be noted that although (the creditor) has pointed out my substance abuse problem, it does not contend that I have cheated, lied, or stolen,” te Velde wrote in court documents. “I have the management operations to handle the administration of (Lost Valley Farm).”

And te Velde said he believed fixes to the dairy can happen soon.

“My overall plan is to preserve my CAFO permit and then find funding to bring 3,000 heifers back from (a local calf ranch) to stabilize my Oregon herd. At that point I will evaluate whether to reorganize or sell (Lost Valley Farm),” te Velde wrote.

But it’ll be an uphill battle without much support. The dairy has angered neighbors — more than 20 area businesses are listed as creditors in Chapter 11 bankruptcy proceedings te Velde filed in April, with other creditors scattered throughout the Northwest.

“I filed Chapter 11 bankruptcy to get a breathing spell to get my operations in order,” te Velde wrote in court documents.

The Tillamook Creamery Association — a nationally recognized cheese and ice cream co-op that promotes its dairies’ commitment to sustainability — has said it’s discontinuing its contract with Lost Valley Farm, and in court documents said it will stop picking up milk from the dairy on May 31. (Te Velde has contested Tillamook’s contract termination.)

The Pendleton-based Eastern Oregonian newspaper has published an editorial stating the dairy shouldn’t receive any more “slaps on the wrist.”

“Eastern Oregon will always be ag country, and we support the many farmers and ranchers who are conservationists at heart — people who know that if you take care of the land, the land will take care of you. But Lost Valley has been off to a bad start, and is giving farmers a bad name,” the editors wrote.

A Once And Future Mega-Dairy?

Whether the dairy is able to continue or is sold could be decided soon. Rabobank, one of te Velde’s creditors, is seeking to sell off his herd.

“Mr. te Velde is opposing (the sell off),” said Riley Walter, te Velde’s bankruptcy attorney. “It’s his belief that the herd and land together have a value significantly more than the land would be worth without cows on the dairy.”

Since then, a bankruptcy judge has decided against lifting bankruptcy protections for Lost Valley Farm, preventing the liquidation sale sought by Rabobank.

Court documents filed with the bankruptcy hearing show that Lost Valley Farm was not in compliance with its permits as of May 15, and the Oregon Department of Agriculture is seeking to hold a contempt hearing, after the dairy continued to violate its permits.

“I think we are at a point, from the department’s prospective, that this operator is not able to comply with the permit,” Taylor said. “We are continuing our regulatory process and continuing our inspections. We continue to have conversations with our colleagues at the Department of Justice on next steps for the facility.”

Correction: June 6, 2018. A previous version mischaracterized Aaron Madison’s frustrations with Lost Valley Farm. He is frustrated that another farm within the Lower Umatilla Basin Groundwater Management Area is violating its permits, when other farms are working to better manage their operations.