Another twist in the search for Seattle’s next police chief

Local candidate Carmen Best is back in the running for chief — to the relief of supporters. 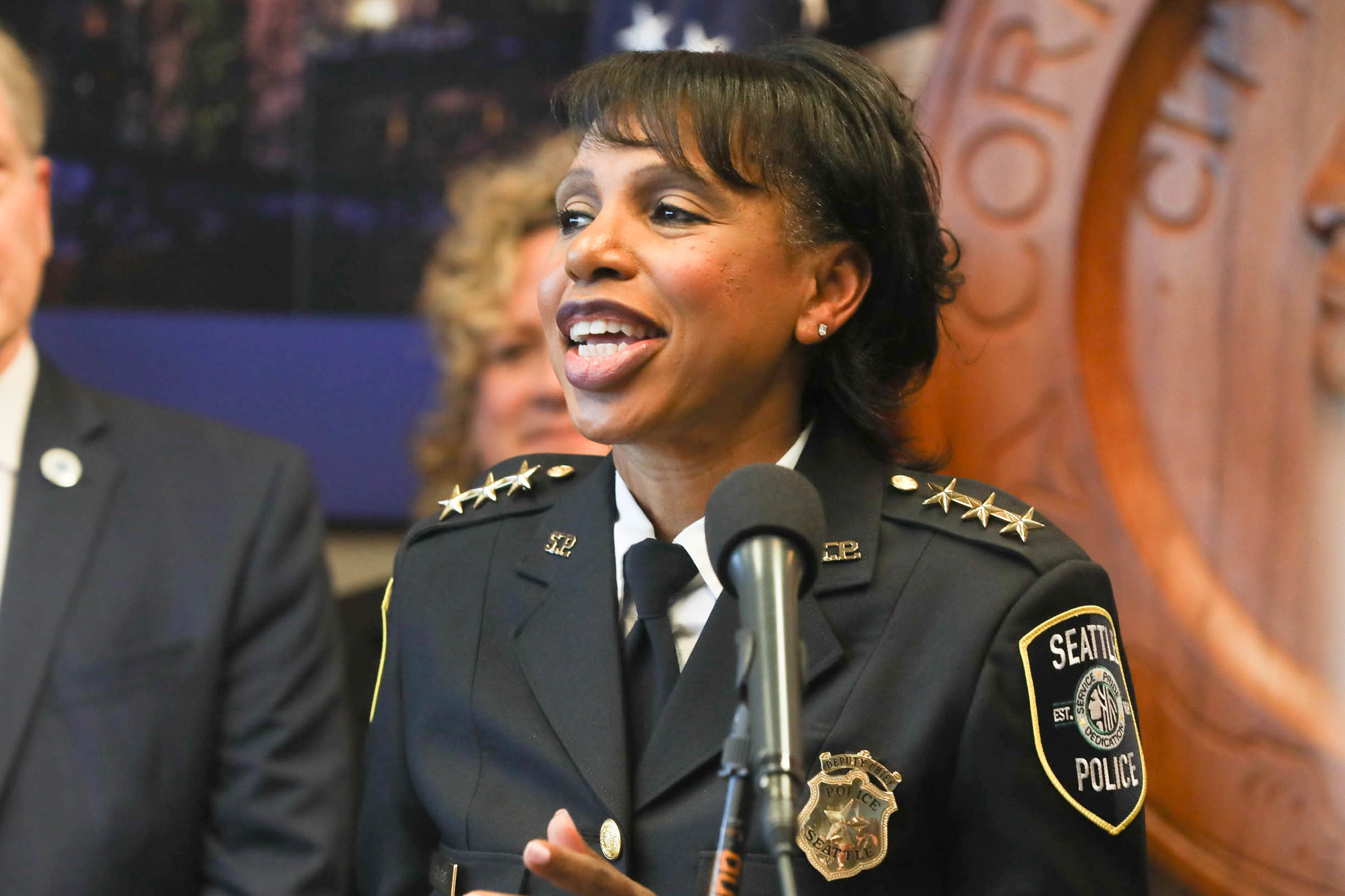 In a surprise twist to one of City Hall’s most contentious storylines, interim Seattle Police Chief Carmen Best was named one of three finalists for the permanent job as top cop on Saturday. The move comes just over a month after she was eliminated from the running.

Her candidacy was revived shortly after candidate Cameron McLay withdrew his application, according to a statement from Mayor Jenny Durkan Saturday evening. McLay has apparently agreed to entertain an entirely different job with the Seattle Police Department, “assisting on reform efforts.”

It’s unclear who approached whom about the shift for McLay, but in a statement Saturday, the former Pittsburgh chief said, “it is clear to me that I can most effectively support Seattle’s continued reform efforts outside of the role of Chief of Police.”

For her part, Best said in a text message to Crosscut, “I am thrilled. You know how much I love this city and how much I love the police department, so nothing could be better than to be a finalist. It’s not over yet, but I will work really hard to make it permanent.”

Her return to the running is the latest in a dramatic and contentious process to find a replacement for former chief Kathleen O’Toole, who left her post shortly after Mayor Jenny Durkan was sworn in last fall.

Durkan convened a search committee of 25 community leaders and experts on policing. A recruiting firm returned a list of possible candidates, which the committee culled down to five finalists, including Best.

But the process took a shift when a separate group of mayoral-appointed “assessors” thinned the five to three, excluding Best, to the surprise of many of the committee members. Former Mayor Tim Burgess, who co-chaired the committee, said in a press conference that the assessors preferred an outsider, but not all committee members agreed.

“Those of us who served on the police search committee worked very hard to ensure the integrity of the search process,” Rev. Aaron Williams, a member of the committee, said in an email to other committee members shortly after Best’s exclusion. “To see it derailed by hidden agendas is very troubling to me.”

Since Best was cut, her boosters have questioned the process further. The city charter demands that finalists for the police chief position undergo a “competitive exam.” But it’s mum on who administers that exam or even what it entails. In its first application by the “assessors,” Best ranked lower than the original three finalists. But that was of little comfort to committee members who supported her candidacy.

The civilian Community Police Commission requested emails and documents tracking how she was eliminated. Its members also hired a consultant, Colleen Kinerk, to assess whether there were any equal employment opportunity violations.

This was all unfolding as a group of well-known community leaders and representatives from the Seattle Police Department, in a moment of agreement, spoke out in favor of Best, calling on Durkan to redo the entire process.

In the statement Saturday, Durkan said the assessors reconvened this weekend to repeat the competitive examination process. Best apparently scored well enough to become a finalist in McLay’s stead.

On Sunday, some of those who were most upset by the original process expressed relief, if not a small amount of confusion, that Best was again under consideration. “It’s such a promising development,” said Lisa Daugaard, head of the Public Defender Association. “There is a real opportunity to build on the atmosphere of innovation and growth that has been set the past few years. Both Chief Best and Mayor Durkan are strongly identified with that progress and it’s great that there is a chance to move rapidly ahead under their leadership. I appreciate the Mayor’s team making sure that chance isn’t missed.”

Speaking Monday, Dominique Davis, founder of Community Passageways, which advocates for alternatives to incarceration, said he was pleased Best was again in the running. "I still feel like it shouldn’t have took the community push to make it happen, but if community has to step up to make things happen, maybe this is a sign we need to do this on more occasions," he said.

Best, he said, knows his community and has shown she wants to work with organizations like his that push for criminal justice reform. An outsider wouldn't have the same deep understanding of local culture, he said. "If Mayor Durkan was standing in front of my face I’d say, 'you know exactly what you should do,'" he said. "'And if you don’t know what you should do, the community’s going to push back against you.'"

Before becoming a finalist for the permanent job, McLay had courted a controversy in Pittsburgh. The Mayor praised his two years there, but the union turned against him. Ninety percent of its members voted no confidence in him, according to a person familiar with the tally. He has also admitted to cheating on a recruitment exam in 1985, according to Q13.

With McLay’s exit from the running, Best joins Ely Reyes, assistant chief of the Austin Police Department, and Eddie Frizell, a police inspector in Minneapolis.

Lingering in the background of the contentious search process is the new stage of reform the department is now entering. After more than five years under a federal consent decree to reform the department, the city recently entered a two-year monitoring period to wind down federal oversight.

U.S. District Court Judge James Robart called a status conference for Monday to update the city on next steps. Durkan said she’s been briefed by City Attorney Pete Holmes in advance of that hearing.

Robart has shown in the past that he closely follows news reports and will occasionally fold those stories into his commentary on what the city is doing well or poorly. With that in mind, it would not be surprising if he has some thoughts on the tumultuous selection process.

This story has been updated with a quote from Dominique Davis.