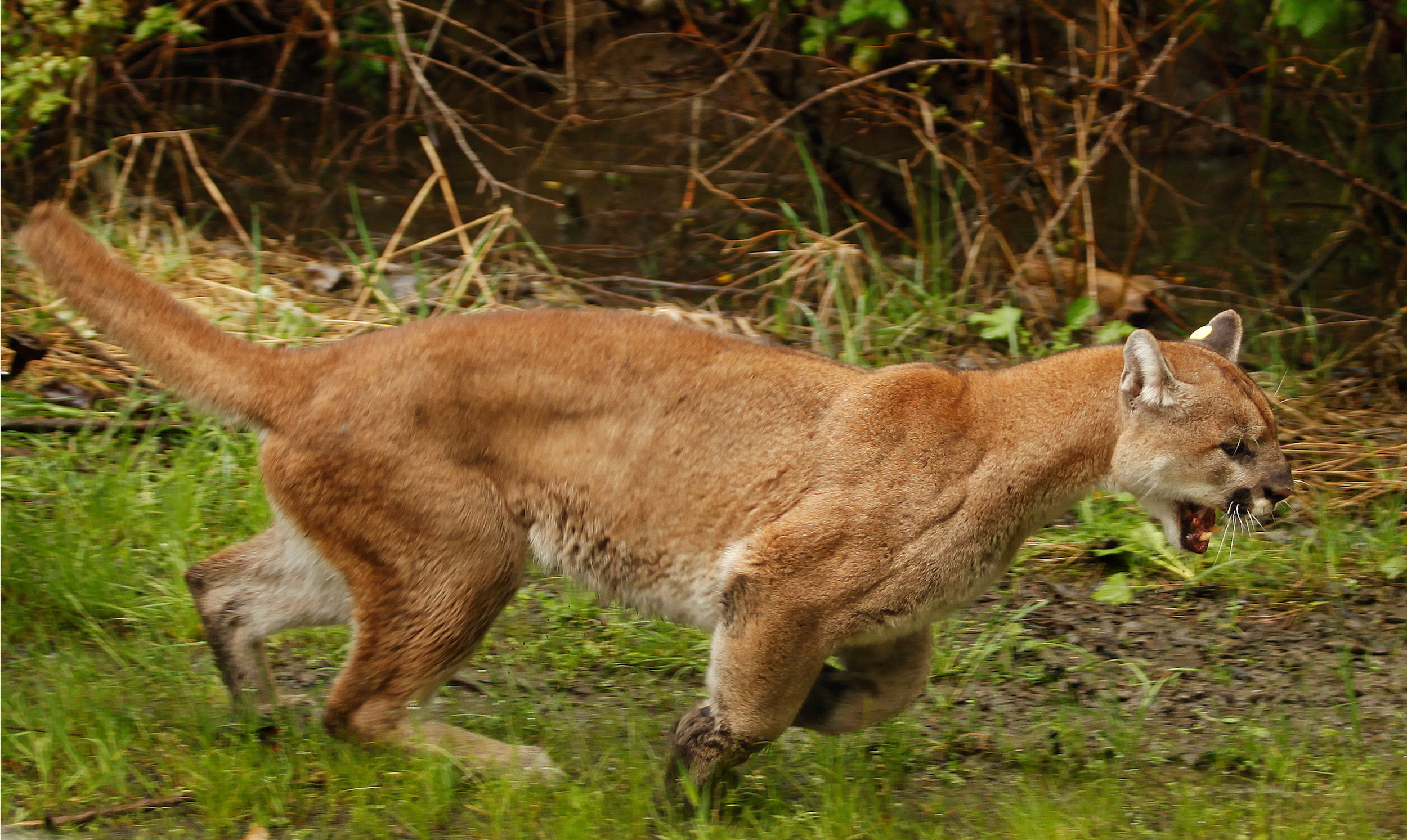 An approximately 2-year-old female cougar runs away from a Washington Department of Fish and Wildlife trap after being released northeast of Arlington Wednesday, May 23, 2012. The cougar was trapped on Tuesday when it was spotted too close to an area populated by humans. After receiving a tag, the cougar was released back into the wild by Fish and Wildlife agents. (AP Photo/The Daily Herald, Mark Mulligan)

When a cougar killed Seattle mountain biker S.J. Brooks and mauled their companion near North Bend in May, speculation quickly followed the shock. Some people wondered if starvation, rabies, or some other affliction might've influenced the cat's motives. But a necropsy from Washington State University’s Washington Animal Disease Diagnostic Laboratory released on Monday turned up "no abnormalities" — no biological reason for the attack. The 3-year-old male was "lean" for its age, but not emaciated.

The only remaining abnormality was that this particular mountain lion attacked human beings at all. Brooks was only the second person killed by a cougar in Washington over the last 94 years. That exceeds the U.S. average, but falls far short of tipping any actuarial tables. Mountain Lion Foundation executive director Lynn Cullens says “there have been fewer than 30 deaths in all of North America in the last 125 years." Why don't the big cats attack more often? No one knows.

It's easy to fill this gap with fear. More and more of us are walking, running and biking through the woods; nearly 50 million Americans went hiking last year. More Americans live in places that remain wildlife habitat. This is especially true in the Northwest, where Cougar Mountain isn't just a historically colorful name. Predators are all around us, even if we can't see them.

“I've collared cougars that have gone into Bellevue,” says Washington Department of Fish and wildlife (WDFW) biologist Brian Kertson. “The average cougar in western Washington spends about 15 percent of its time using areas that have some amount of residential development."

Snoqualmie, Duvall, Fall City and other foothills communities all cohabit with cougar populations. Kertson says he has “GPS data of cougars among houses on Lake Sammamish. People just don’t see cougars. I think a lot of people would be surprised” to know how close they are.

With so much patchwork overlap between human territory and big cat territory, conflict seems inevitable. But incidents are extremely rare, and getting rarer.

Despite some media accounts of "comeback cats," Cullens says. "We've seen them extirpated in all the states east of the Rockies except for Florida." She says that "small populations [have been] reestablished in North Dakota, South Dakota, Nebraska," but the ones seen in other eastern states seem to be "lions that have been dispersed from Texas or Florida or the Black Hills. We don't have breeding populations" there. She says that even in the West, cougars aren't really secure, given the persistence of trophy hunting and the toll taken by speeding vehicles.

Still, cougars and other big predators get a bad rap. "Everyone worries about being attacked by a cougar or a bear," Kertson says. “That’s just everyone’s “evolutionary baggage.” But "you're far more likely to be attacked by a domestic dog than you are by a wild animal."

Deer and cows kill people, too, and not just by jumping in front of cars. But no one worries about them. (Virtually no one worried about mountain goats, either, until 2009, when Klahhane Billy gored Robert Boardman to death on a trail in Olympic National Park.) Why the disconnect?

Ironically, Cullens says, the “places where [cougars] tend to be more feared and less tolerated are places we think of as the Wild West.” And, she says, contrary to stereotypes, the politics of big cats don’t just pit ranchers against conservationists. The big cats are more likely to target backyard goats or pets than steers on the open range.

A cougar's domestic menu choices are "almost always goats, llamas and alpacas," Kertson says, "and then sheep — but everything eats sheep." But keeping goats or even pets safe demands a relatively simple solution: Bring them in at night.

Kertson says it’s "extremely rare for a cougar to go into some kind of boarding structure like a barn. If people boarded their livestock at night, the majority of the depredations would go away." The same goes for bears (though their omnivorous habits require some special considerations concerning pet food and garbage). "As we've seen increasing residential development, we've seen pretty steady bear conflict numbers," he says. Kertson thinks convincing habitat-adjacent humans to put away garbage, pet food and bird feeders would eliminate most conflicts.

None of this is rocket science, but it requires changing habits and possibly spending money — which most humans avidly resist.

But most people feel a fear of cougars most acutely not on our home turf, but on theirs — out on the trail. Education helps: Don't go out alone, and if a cougar approaches, make yourself look big, make noise and throw things. Do everything to make yourself seem like difficult prey, and don't run. But these tactics are not a guarantee. The mountain bikers attacked near North Bend evidently did almost everything right, and it didn't work. How should we interpret that?

There is one clue. Brooks did run, when the cougar attacked a second time. It was a Catch-22: The standard procedure had failed, and running for help might've seemed like the only option to Brooks. Mountain lions lack the visual acuity of humans, Cullens explains, but “they see contrast and they see movement.” That movement often triggers a chase instinct, which helps explains why mountain bikers have been targets of cougar attacks in recent years.

Kertson says it’s not unreasonable to think in terms of domestic cats: If you want to play with a cat, drag something in front of it and wait for the cat to pounce. Black-tailed deer are a cougar’s natural prey, and Kertson says that as long as they're not being chased, evolution has taught them not to run: If a black-tailed deer knows a cougar is near, he says, “it freezes.” In a cougar's eyes, a mountain biker moving at speed may be a passable match for a black-tailed deer.

There is a theory, however, that the problem isn't our fear — it's that cougars are no longer afraid of us. Some people speculate that the rampant cougar hunting of the past not only reduced the number of large carnivores, it also influenced their behavior. Carnivores that messed with people got killed; those that didn't passed on their genes. These speculators wonder if current limits on hunting and trapping mean those people-avoidance genes will be lost.

Kerston doesn't buy any of that, and he doesn't know why people would think so. "That's always been a head-scratcher to me," he says. "I've never gotten the sense that cougars are afraid of people to begin with. [If you] see an adult male cougar walking around in the forest, he isn't afraid of anything."

CORRECTION: An earlier version of this story misgendered S.J. Brooks, the victim of the cougar attack. Crosscut regrets the error.