A new coalition of activists is calling for a permanent shift in how people get around Seattle. City officials say they’re right, to a point. 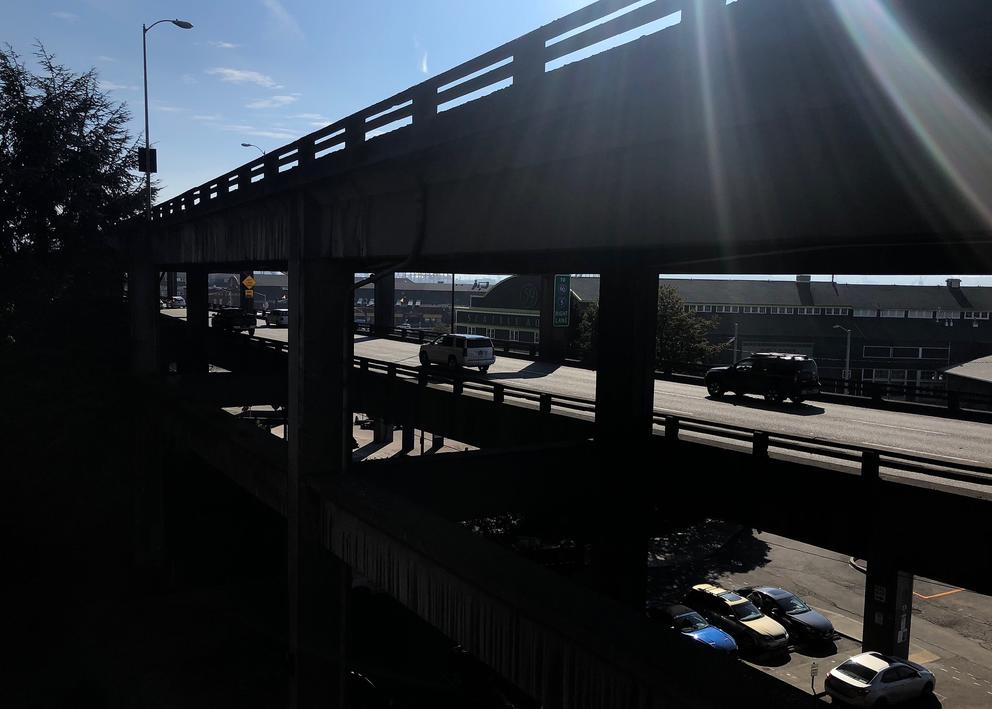 In one month, Seattle’s already-bad traffic is going to hit peak awful. On Jan. 11, 2019, the Highway 99 Viaduct will close, three weeks before its replacement tunnel opens. With the Viaduct’s more than 90,000 daily drivers spilling onto other streets and highways, January is sure to be a mess.

But the highway closure isn’t the only traffic headache on the horizon. The Convention Center expansion is creating a massive construction zone in the heart of downtown. As construction progresses, the closure of the Convention Place bus station, set for spring 2019, will result in nearly 600 daily buses being booted from the downtown transit tunnel to surface streets. The reconstruction of the waterfront and Coleman Dock ferry terminal will add to the mess as will a number of on-going private downtown construction projects. And experts predict that once tolls kick in on the new Highway 99 tunnel next summer, thousands of drivers will divert to city streets to avoid the fee.

All told, the city expects the worst of the traffic problems to drag on until 2024, a five year period they had been referring to as the Period of Maximum Constraint, but has now been rebranded the Seattle Squeeze.

In anticipation of this jam, ideas for surviving the coming traffic nightmare abound. From expanding bus service to encouraging working from home to asking people to take vacation during the closure, city officials are desperate to get fewer people to drive solo.

Mayor Jenny Durkan rolled out another idea at a press conference this afternoon: a new program meant to help commuters leave their cars at home. Starting Dec. 17, West Seattle residents will be able to use an app or phone call to hail shuttle vans to take them from their homes to either the Alaska Junction bus hub or the water taxi dock at Seacrest Park. It is an expansion of a pilot program King County Metro is currently running in Bellevue.

“This announcement is showing you one of the very many things we’re doing so the people of Seattle can get in and around [the city] and to increase the use of transit as much as we can,” said Durkan at the press conference. “We know that access to transit is the key for making this work for people.”

She continued, “We’re going to do everything we can to reduce trips by solo drivers. We have to get people out of their single occupancy vehicles. We just don’t have the road space and it’s bad for the climate.”

But a coalition of transportation and environmental advocates doesn’t just want to make it through the Squeeze. Move All Seattle Sustainably (MASS) wants to take advantage of the long, painful moment to permanently shift the way people get around town. This morning, MASS announced a slew of strategies they want to see the city adopt to improve busing, biking, and walking in Seattle.

“Because the Seattle Squeeze is going to be bad, people are going to be more open to trying different ways to get around than normal, so it’s an opportunity to create mode shift,” said Katie Wilson, general secretary of the Seattle Transit Riders Union. “We’re not confident, from what we’ve seen, that the Mayor’s office is looking at it that way. We want to start a conversation about how we can make it really easy and convenient for people to switch to transit and walking and biking.”

The Seattle Department of Transportation (SDOT) says it is on board with MASS’s ideas about mode shift.

“We agree with MASS and everyone else that this is the opportunity not just to solve the problem for three to five weeks but to make a broader behavior change over time,” said SDOT downtown mobility director Heather Marx. “We’re not building any more roads in the city of Seattle, so we need to make sure that as we absorb the additional growth, we have the tools we need to get [people] around.”

Still, the city is not just thinking about long term change. Marx said they’re taking an all-hands-on-deck approach to the Viaduct closure. The city is already running its transportation operations center all day every day using traffic cameras to track congestion and make signal timing changes or deploy police officer to direct traffic as needed. This fall, the city purchased extra bus service from Metro for just before, during, and after rush hour on 20 routes that serve downtown. Marx said they’ve modified several construction permits to prohibit downtown construction sites from spilling into the street while the Viaduct is closed. And they launched a new website to serve as a clearinghouse for traffic information and trip planning during the Squeeze.

Commute Seattle, a partnership of the Downtown Seattle Association, SDOT, Metro and Sound Transit that helps downtown employers with transportation planning, has also been working hard to get people ready for the Squeeze. “We know we’re losing essentially 20 percent of freeway capacity in the city,” said executive director Jonathan Hopkins of the Viaduct closure. “It will affect all freeways in the region. During the last viaduct closure in 2016, travel times increased 30 percent.”

The key to getting through it this time, Hopkins said, will be shifting as many people from solo driving to carpooling, transit, walking, biking or telecommuting, and getting those that can to switch from standard nine-to-five hours to starting their day earlier or later. Hopkins said, “This viaduct closure is just the kick off to pretty congested times. It’s an opportunity for us to do all the best things and prepare for the future. We hope companies do it for three weeks, then have an open mind for what they keep doing.”

MASS is focused on that longer term. None of their proposals can really be in place before the Viaduct comes down. But, said Wilson, “This is the time where the city needs to set very ambitious goals for switching modes. Our proposals will make [the Squeeze] less painful than if we don’t do anything. But more than that, we’re feeling the urgency of the climate crisis and a growing population that will make congestion worse. So this is an opportunity we don’t want to miss.”

To improve bus service, MASS says it wants to see more bus-only lanes that keep buses moving even when car traffic is jammed, signal priority that times green lights with a bus route’s pace of travel, and bus signals at intersections that allow buses to jump ahead of the queue of cars before the light turns green for everyone. The coalition identified 20 sections of street around the city with particularly bad pinch points that slow down bus traffic.

Wilson said, “Buses should not be sitting at choke points with 40 to 60 passengers sitting in traffic. We need to prioritize the larger number of people being moved through the city. If we can keep buses moving fast, it might incentivize people [to use them].”

The city does have some bus improvements in the works. SDOT will eventually expand the northbound bus-only lane on 5th Avenue from its current endpoint at Cherry Street to Marion Street, where buses can jog over to a planned 6th Avenue bus-only lane. This summer, SDOT made 3rd Avenue in the downtown core a bus-only street all day, rather than just during the morning and evening rush hours.

For Gordon Padelford, executive director of the biking and walking advocacy group Seattle Neighborhood Greenways, the Seattle Squeeze is the perfect time to rethink walking as transportation. Currently, 8 percent of downtown workers walk as their main commute mode. Padelford said, “On average, those people are walking about two miles to downtown. That [distance] covers a lot of people in Seattle. If we make walking conditions better, we could see the number of people doubling.”

Better, according to MASS, is reining in construction sites and rethinking signals for pedestrians. As anyone who’s used downtown sidewalks knows, the many ongoing construction projects often block the way, requiring people to criss-cross the street or go out of their way — at best, a time-sucking inconvenience; at worst, a major barrier to travel for wheelchair users and other people with mobility issues. MASS wants the city to create (and actually enforce) stronger rules requiring construction sites to leave sidewalks open when possible, and create easy detours when not.

Padelford also thinks taking walking seriously means timing signals so that pedestrians aren’t forced to wait through a whole light cycle if they don’t push the walk button in time. He said, “Right now the city is not measuring any pedestrian delay and spending lots of time and money prioritizing people driving to and from the highways.”

On the bicycling front, MASS wants to see Seattle build out a complete, connected network of bike infrastructure. Currently, the 2nd and 7th Avenue protected bike lanes are islands of good infrastructure surrounded by streets without bike lanes. The most recent quarterly report on Move Seattle progress shows the city is lagging far behind on its bike network goals. Of the 10.43 miles of protected bike lanes SDOT said it would build in 2018, just 1.88 miles were completed this year. Plans for a protected bike lane on 4th Avenue have been tabled because of the Seattle Squeeze. The city says the added traffic makes it a bad time to build a new bike lane downtown.

In the long term, SDOT has a laundry list of transit, bike and pedestrian improvements to implement, much of which MASS supports and said aligns with its goals. The centerpiece of Durkan’s long term strategy is congestion pricing, a fee charged on drivers entering downtown during the work day. In place in a handful of European and Asian cities, Seattle would be the first U.S. city with congestion pricing.

Wilson said MASS’s proposals are the foundation that will make such a proposal possible and that if the mayor doesn’t start improving alternative transportation now, congestion pricing won’t work in the future. “It is only plausible if you’ve made transit and biking and walking super convenient and people can envision themselves not getting in their car.”