The company reversed course on Thursday, citing opposition to its plan for a new headquarters in the city. 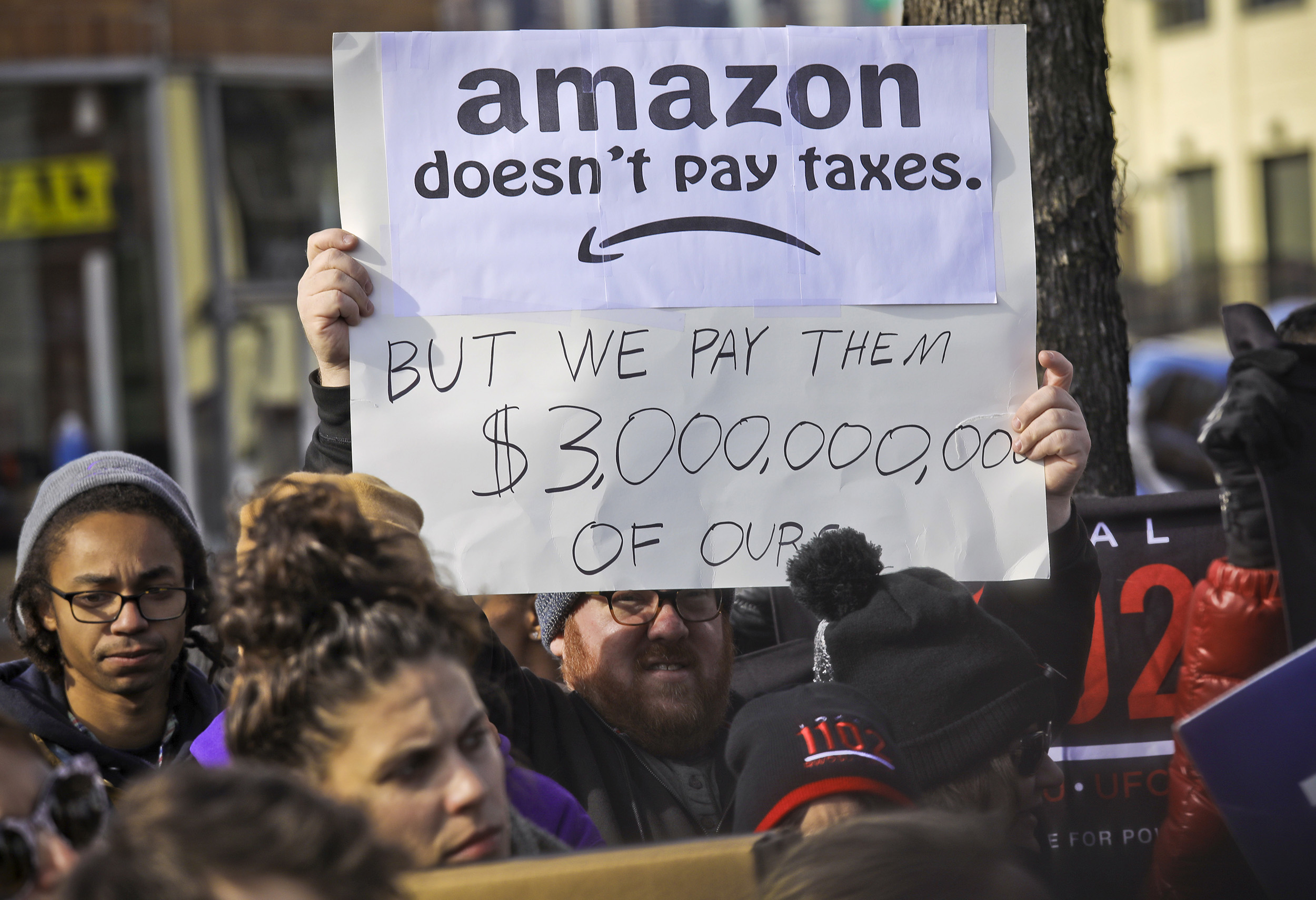 When Amazon announced Thursday that it was abandoning plans for a new headquarters in New York City, East Coast opponents of the company’s proposed expansion, and multibillion-dollar incentive package that went with it, celebrated. On the opposite coast, Amazon’s Seattle critics, who for months issued warnings about the impacts the home-grown tech company could have in a city, joined their New York counterparts in declaring victory.

Amazon, which will continue to maintain a headquarters in Seattle, launched a search for a second headquarters, dubbed HQ2, in 2017. The effort sparked a bidding war among states and cities offering incentives. After a long, highly publicized selection process, the company announced in November that it would build two new headquarters, one in Long Island City and one in northern Virginia. Seattle activists and some elected officials sounded the alarm.

They warned that bringing tens of thousands of Amazon jobs to other communities could result in the displacement of existing residents, pointing to what they said is an affordability crisis brought on by the rapidly expanding tech market in Seattle.

In January, Seattle City Councilmembers Teresa Mosqueda and Lisa Herbold spoke at a New York summit hosted by union and labor leaders opposing Amazon’s expansion. They brought up the lack of affordable housing in Seattle and Amazon’s role last year in tanking a business tax that would have raised funds to address homelessness, warning something similar could happen in New York.

Members of Puget Sound Sage, meanwhile, also traveled to New York and shared Seattle’s experience with Amazon. The organization, which advocates on a number of issues, including affordable housing and transit equity, signed an open letter in October, before the locations of the second headquarters were announced. The letter called for Amazon, wherever it landed, to make investments in public education, transit and affordable housing,  among other things. After the company’s plans were announced, they worked with counterparts in New York who opposed the expansion.

“What we essentially said to some of our allies in New York is, when they come in, you can anticipate a few different things,” Keenan-La said. “There will be a lot more people, you’ll need more investment in transportation, you may feel some displacement pressures, and you will experience Amazon playing a significant role in local and regional politics.”

Amazon’s plan to move into Long Island City, part of the borough of Queens, had amplified existing concerns about growing income inequality in New York. Long Island City is a diverse area, and the new headquarters would have been adjacent to the world’s largest public housing project. The company had said it would bring $5 billion total investment and more than 50,000 jobs to New York and Virginia, and in New York it was expected to generate $27.5 billion in state and local tax revenue over 25 years. A $3 billion tax incentive the company received, however, immediately generated criticism.

“That would have been ideal, to see them make massive investments and be better partners to the communities in which they operate, but I guess to me it feels like something good that they responded,” Keenan-Lai said of the company's decision to scuttle its New York plans. “I think it was a positive thing to show that community organizing can be effective.”

The rapid growth of the tech industry in recent years has changed Seattle’s economy and brought in a flood of high-paying jobs, including 45,000 at Amazon. But Keenan-Lai said a lack of housing, combined with the high wages companies like Amazon pay, made it more difficult for existing long-term residents to afford life in Seattle.

“A lot of people are being displaced out of the city, in part because the market isn’t trying to serve them,” Keenan-Lai said. “That has a cultural impact on the city, as well as a tangible impact on individuals. Small businesses run by people of color are really facing a hard time in this transition.”

Maritza Silva-Farrell, the executive director of the New York organization Align, one of the groups Sage worked with, called Amazon’s call for competing incentive packages a “predatory model” and said the company hadn’t responded to community concerns in a meaningful way.

Both she and Keenan-Lai said companies can make large expansions into new cities without creating the same disruptions Seattle has felt, but unchecked growth of high-paying jobs without contingency plans for existing residents can drive up the cost of living and reshape neighborhoods.

“To pull out of the agreement and pull out of the deal and say we’re not going to be in New York City at all shows what type of corporation they are,” Silva-Farrell said. “They had no intention to work with the community.”

Amazon didn’t respond to a request for comment Thursday afternoon, but in a blog post said it would not be searching for a location to replace the shelved New York expansion.

“For Amazon, the commitment to build a new headquarters requires positive, collaborative relationships with state and local elected officials who will be supportive over the long-term,” the company wrote. “While polls show that 70 percent of New Yorkers support our plans and investment, a number of state and local politicians have made it clear that they oppose our presence and will not work with us to build the type of relationships that are required to go forward with the project we and many others envisioned in Long Island City.”

Herbold said she and Mosqueda were invited by opponents of the incentive package to talk about Seattle’s experience with Amazon during an event at the Retail, Wholesale and Department Store Union’s headquarters in New York.

“The way they got people to start questioning [the incentives] was to get us to talk about what some of the costs are of a very, very large employer that brings a lot of great jobs, but how that affects the housing market when you have a lot of well paid people competing with the residents of the city,” Herbold said. “That creates a need for affordable housing that somebody needs to pay for.”

She said the pushback against Amazon in New York could strengthen the hand of officials across the country negotiating with large companies in the future.

“It’s really what local officials do in the wake of this decision, and whether ... we can prevent these state-to-state, city-to-city competitions that aren't good for anybody,” she said.