A proposal currently before the school board relies on a new idea to close the opportunity gap. Not everyone is on board. 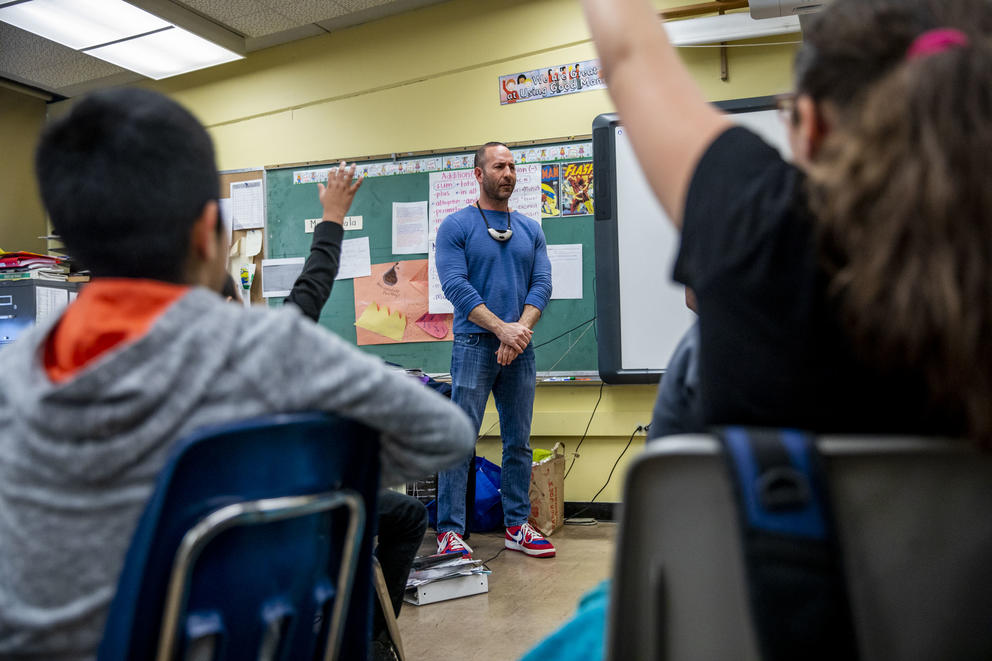 Will Hershman leads his fourth grade class in a poetry lesson at Northgate Elementary School on Thursday, Jan. 31, 2018. (Photo by Dorothy Edwards/Crosscut)

When tasked with closing opportunity gaps and making education equitable for Seattle students in 2013, Seattle Public Schools did what one might expect a district seeking equity might do: they put together a strategic plan dubbed “Excellence for All” that sought to address the needs of all students, equally.

But that, said district three school board director Jill Geary, was a flawed approach.

"We had a strategic plan that said we were going to do work for all kids and that we were going to make sure each and every student was getting their educational needs met, and it didn't work,” Geary said.

An internal report evaluating the success of that strategic plan, which expires this June, showed mixed results. The district did manage to reduce proportionality gaps for students receiving special education services and for students who were suspended or expelled.

Yet, the opportunity gaps in English language acquisition and mathematics proficiency both widened for third through eighth grade students, failing to meet the district’s objective to reduce the gaps. SPS also failed to meet its goals regarding positive school environments, which was measured based on student and staff satisfaction surveys.

Now the district is considering a new strategic plan — one that takes a very different perspective on closing opportunity and achievement gaps.

The proposed 2019-2024 strategic plan, which will be voted on by the Seattle School Board on March 27, was created over the course of five months by a 16-member steering committee, including Geary, Seattle Education Association president Phyllis Campano, parents, and several SPS staff members.

The steering committee, which was hand-picked by Superintendent Denise Juneau, met six times throughout the drafting process and two work sessions were open to the public via special school board meetings--one on Oct. 29 and the other on Jan. 30.

Some of the equity goals summarized in the expiring plan mirror ones found in the new plan. But this time around, the district wants to be more intentional about concentrating resources on students of color.

The animating force of the effort is a doctrine known as “targeted universalism.”  As applied in the proposed plan, the doctrine encourages acknowledging and responding to the differentiated needs of students of color, but places a particular focus on African American males.

The reason for the focus is that, nationwide, achievement gaps have been found to disproportionately impact African-American male students. Black students face the highest rates of discipline both across Washington state and in Seattle Public Schools, and graduate at a rate beneath state and district averages.

By elevating these students’ performances, the doctrine holds, educational outcomes for the larger student population would ultimately improve.

“We can't not focus on each and every student — we still have to focus that,” Geary told Crosscut. “But we had to tighten it up because we weren't successful with the kids that we really hoped to be who are in the opportunity gap.”

But some members of the community have expressed doubts about whether or not the plan would deliver, saying that it is high on idealism, yet short on pragmatism and details.

"It's great to have flowery and heartfelt language about wanting to help all kids, it doesn't really matter if the trains aren't running on schedule," education advocate Melissa Westbrook told Crosscut. "It just feels sometimes like the district focuses narrowly but has so many targets to hit, that they don't hit any."

Westbrook added that consideration of poor educational outcomes for other student populations, such as those who receive special education services and migrant students also need to be addressed by SPS. According to OSPI data, there are significant disproportionalities in instances of discipline and graduation rates for those demographics.

"We made it more explicit so that every person who is teaching our students understands that they need to bring success to African-American males,” she said, adding that the effort will require leadership and staff on all levels to be a part of the messaging if it is to work.

As it currently stands, the six-page proposal is notably shorter than the current strategic plan, which weighs in at 30 pages. According to the implementation timeline sketched out in the board action report for the plan, more concrete details regarding the enactment of the plan will come later if it is adopted.

But despite the promise of more to come, Marquita Prinzing expressed uneasiness about the development of the plan.

"If I knew who was leading the work, I'd have a little more faith,” the director of the Seattle Education Association’s Center for Racial Equity said. “It kind of felt like the strategic plan came from nowhere. But these kinds of things get co-opted or dismissed before they ever get institutionalized."

While Juneau is ultimately responsible for the execution of any strategic plan the district implements, how work specific to the new plan would be delegated is still an open question.

Prinzing, who worked in Seattle schools for seven years before moving on to working with the teachers’ union full-time, also pointed to a policy the district adopted in 2012 called “Ensuring Educational and Racial Equity.” This was intended to respond broadly to racial equity issues within Seattle schools, such as culturally inclusive classrooms and workforce representation.

“When policy 0030 came out, a lot of people thought it was going to be transformative,” she said. “But it remained dormant for several years.” The district’s Department of Racial Equity Advancement launched in 2017, although several other equity-based offices did precede it.

Though she is mostly skeptical of the proposed plan, Prinzing said that she was glad the district released some version of the plan prior to a vote. She added that the incompleteness of it didn’t initially bother her given that the steering committee would be revising the plan before the school board took a vote.

But now that it’s become apparent that the draft slated to be voted on at the end of the month still isn’t fully fleshed out, she has concerns.

Prinzing is further troubled that the district didn’t consult its own racial equity analysis tool during the drafting process. Geary told Crosscut that the steering committee inadvertently missed this step but that a racial equity framework was at the forefront of building the proposed plan, which also includes efforts to retain and recruit teachers of color and sets forth intentions to improve non-instructional operations for all students, such as food services and transportation.

"It certainly was our intentional focus the entire time but there are probably some additional questions that could have been asked," she said.

Also problematic, said Prinzing, is that SPS doesn’t contextualize the racial equity initiatives it presents in the new plan; there is no mention of the impact of segregation in Seattle schools nor specific instances of disproportionality as it relates to outcomes for students of color.

“That is a classic Seattle tactic,” she said. “[It’s] all about hope and vision without any recognition of how or why we failed in the past.”

Funding for the proposed plan is another issue that must be tackled.

It’s presently unclear whether or not the district has established an estimated budget for costs related to implementing the plan, but the board action report for the plan asserts that the costs associated with the priorities of the plan “will vary depending on their complexity, and available funding.”

It should be noted that there is no law mandating the enactment of a strategic plan like this. However, SPS representatives say the implementation of one is a hallmark of a high-performing district.

The expenditures related to the development of the plan have so far totaled roughly $144,000. Costs include Juneau’s three-month long “listening and learning tour,” through which the recently appointed superintendent engaged with approximately 2,500 community members and SPS employees to identify the district’s strengths and weaknesses.

A contract with District Management Group and an additional round of community engagement in January with various community groups such as the Southeast Seattle Education Coalition and the Seattle Special Education PTSA  also appeared on the bill. Additionally, the district took feedback from its African American Male Advisory Committee.

More than 4,000 people were engaged in some aspect of the plan's development, said district spokesperson Tim Robinson in an email statement provided to Crosscut.

Funding for the plan would primarily come from the district’s operations budget, but officials say they would seek additional outside revenue. However, it's unclear what the costs associated with executing the plan might amount to.

At issue is SPS’s uncertainty surrounding its budget for next year as it faces a projected deficit of $78.4 million, along with unsureness about whether or not the State Legislature will increase the district’s funding, according to Geary.

"It's the cart before the horse—you have to have [the proposed plan] adopted before the deep dive work can be done to make it actionable,” she said. “We also, realistically speaking, have to know what [the district’s operations] budget is going to be."